It might not be on the scale of the recent unearthing of 30 well-preserved, 3,000-year-old mummies in Egypt, but the discovery of a major work of art that’s been hidden for decades behind a wall in downtown Edmonds is creating excitement and raising questions about where it came from, and what should happen to it.

“I was shocked when I got a call from my work crews telling me that they’d uncovered a long-forgotten 40-foot mural behind an interior wall,” said Jen Lawson, who will soon open her new business in the storefront at 114 4th Ave. N. “There’s no doubt that we’ve uncovered a piece of Edmonds history here, and that it probably has an interesting story to tell.”

Lawson’s shop will be called Crow, and will feature original items from local artists along with cards, gift items, candles, soaps and similar wares. “I’m looking to stock a well-rounded mix of items and create a one-stop shop where customers will find everything they need to decorate for a special occasion or find the perfect gift,” she said.

The space, vacant for several years, was formerly home to Salon Pena, which occupied it beginning in about 1990. Prior to that things get a little uncertain.

“The story as it comes to me is that during the ’60s, ’70s and ’80s an Edmonds woman named Geraldine Hansen Noble owned the property,” relates Lawson. “She operated an art studio in the downstairs space and lived upstairs with her two daughters. I’m 100 percent certain that she is the artist who created the mural.”

It turns out that Noble was a local artist and sculptor of some renown. According to an article about her by Dorthy Brant Brazier and published in The Seattle Times on Dec. 16, 1968, she was one of Mark Tobey’s last private students and for a time specialized in portraits of local notables including Ada Breen, Nicholas Damascus and the Rev. John C. Leffler. Her work was recognized outside of the Seattle area, as evidenced by her receiving a commission in 1968 to create a major oil painting –dominated by an image of the Rev. Dr. Martin Luther King Jr. and including likenesses of Moses and Abraham Lincoln — to hang in the former Highland Elementary School in Portland, which had just been re-named in King’s honor. Of this work, the article quotes her as saying, “How close I have come to the physical likeness I cannot know, for we had never met on this plane. But through the miracle of color, his soul seemed to emerge and say to me what I had felt of him.”

Noble died in October 2004. Her obituary describes her as the daughter of Jens and Mary Hansen, owners of the Hansen-Sunbeam Bread Company on Seattle’s lower Queen Anne, “a professional fashion model, and an accomplished portrait and sculpture artist who studied under Dupen, Mark Tobey, Nick Damascus, Kenneth Callahan and Ray Jensen.” It goes on to say that she taught at Burnley’s Art Institute and Edison Tech, and describes her as an “elegant, fashionable and sophisticated lady.” Funeral arrangements were handled by Beck’s Funeral Home in Edmonds. 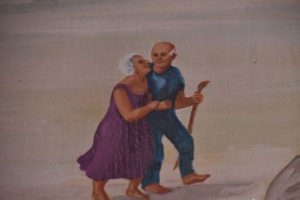 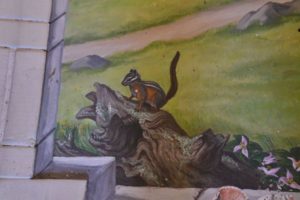 But with renovations in full swing for Jen Lawson’s planned opening later this year, the fate of Noble’s mural is uncertain. The workers have carefully removed it from the wall and stacked the various panels in the back room, but where it will go from here is an open question.

“I’ve contacted the Edmonds Historical Museum and representatives from Art Walk Edmonds,” said Lawson, “but while folks are expressing interest there’s no solid plan in place as of now.”

Story by Larry Vogel, with additional research and reporting by Chris Deiner-Karr and Betty Lou Gaeng