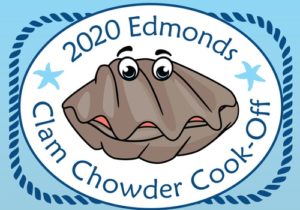 The fifth annual Edmonds Clam Chowder Cook-Off — set for Feb. 22, 2020 — will have a new twist: an international competitor. Early this year, the Japanese city of Funabashi held its first clam chowder event, which was modeled after the popular Edmonds event. The contest went so well that next month Funabashi will hold their second competition.

In hearing about the competition, a partnership was formed between Edmonds and Funabashi. The Edmonds Chamber has agreed to host the winning team from Japan in its competition in February. Ten local restaurants/caterers, plus the team from Funabashi, will go head-to-head to see who can wow the crowd and our panel of guest judges hoping to be crowned “The Best Clam Chowder”.

Proceeds from the Clam Chowder Cook-Off help the Edmonds Chamber produce the ever popular An Edmonds Kind of 4th parade and fireworks celebration.