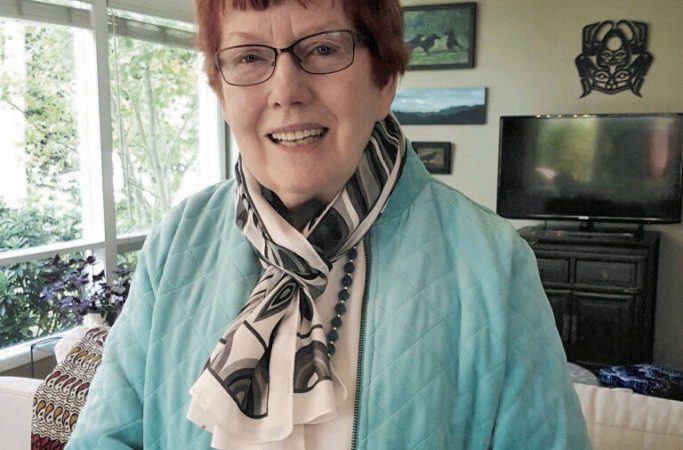 Margaret Trahar, “Peggy” to her family and many friends, died peacefully in Mountlake Terrace, Washington on September 29, 2019.  She was 81 and had lived with metastatic melanoma for almost 2 years. Peggy was born on January 1, 1938 in Methuen, MA to Joseph Thomas Fox and Olive Helen Fox. She had two brothers Thomas and John. She is survived by her brother Tom.

Peggy graduated from Fitchburg State College with a degree in nursing and kept her nursing license active for more than 50 years. Later she went on to get a Masters in Gerontology at the College of New Rochelle, in New York and worked extensively with dementia patients at The Burke Rehabilitation Hospital in White Plains, NY.

She loved to see the world and traveled extensively, especially enjoying Paris which she first visited as a young woman in her 20s. She traveled by boat to Sydney Australia as a young woman where she met her husband of 47 years Jonathan Carl Trahar, who preceded her in death in 2013. Her sense of adventure led her to live in Massachusetts, San Francisco, Sydney, Australia, Queens and Rye, NY, and Edmonds, and Mountlake Terrace, WA.

Peggy had a love of languages and she spoke seven of them. She loved to read and wrote memoirs of important chapters of her life and travels.

She was always active in each of the communities she lived in. A passionate member and one-time local president of the League of Women Voters and a lifelong member of the Daughters of the American Revolution. She had a true spirit of service and was a friend to all.

A Funeral Mass will be held for Peggy at Holy Rosary Parish in Edmonds, WA on Thursday October 17 at 11:00 am. A viewing will be in the Church at 10:30 am and a reception will immediately follow. A private graveside internment will follow at Holyrood Catholic Cemetery in Shoreline, WA