When it comes to parking in downtown Edmonds, people are willing to walk a few blocks to their destination. But there are concerns about barriers that get in the way of walkability, particularly for those who have mobility challenges. And there are unanswered questions about the use of parking permits available to both employees and downtown residents.

Those are among the takeaways of a recent online parking survey conducted by the City of Edmonds. City staff presented the results to the Edmonds City Council last week.

The city-generated survey was conducted from July 24-Aug. 12 using the online Survey Monkey software, Public Works Director Phil Williams said. A total of 705 people responded, with 82% of those being Edmonds residents. Of the 82% in Edmonds who responded, 24% lived downtown.

The goal was to better understand the community’s experiences related to parking before possibly moving forward with a parking study. The city council decided in August to postpone approving a consultant contract for a parking study amid concerns about scope and cost.

The key takeaway from the survey, according to Williams: “Respondents were concerned about access,” he said. “They had a lot of access issues that weren’t necessarily specifically related to parking but parking was part of it. They are also concerned about the character of our downtown and how any changes you make in parking might change that character.”

Of the survey respondents, 60% were regular visitors to downtown Edmonds.  Eleven percent of respondents were employees of a downtown business and 7% defined themselves as the owner/manager of a downtown business. A total of 5% of those responding said they had mobility issues and challenges — these included being vision-impaired, or using a wheelchair, walker or cane — while crossing streets or walking on sidewalks

On average, those responding said finding parking is not too difficult, Williams said. “There were people on both ends who either thought the parking was very difficult or very easy, while others didn’t see a problem,” he said. 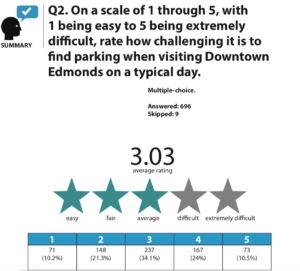 Among Edmonds residents, a majority rated parking conditions as average, and 70% were willing to walk two-plus blocks to reach their destination after parking. Downtown residents who responded to the survey rated conditions as slightly fair to average. Downtown residents said they were comfortable walking three or more blocks to a destination after parking.

The 60% of respondents who identified themselves as regular visitors to Edmonds rated parking conditionings as slightly fair to average, and those visitors said they were comfortable walking two to three blocks to a destination after parking.

Downtown Edmonds employees, on the other hand, rate parking conditions as average to slightly difficult. Employees prefer to park within one to three blocks of work, and they were the user group that was least supportive of any decreased time limits for on-street parking or increased parking enforcement activities, Williams said.

Owners and managers of downtown businesses also rated parking conditions as average to slightly difficult. This group prefers to park one to three blocks from their business, and they were the group that was most supportive of “curb space management” — the use of so-called “tick marks” that indicate where drivers should park — and sidewalk and streetscape improvements, such as fixing broken sidewalks and trimming landscaping to improve walkability.

Development Services Director Shane Hope then took over the microphone to further discuss aspects of the study. Hope said that while 68% of respondents overall are willing to walk two or more blocks, it’s harder for those with mobility difficulties — 5% of those responding — to park more than a block away. And sometimes poor sidewalk conditions make access an even greater challenge for that group, she said. Survey respondents also expressed a desire for additional ADA-accessible parking along Main Street, she added

Those answering the survey also pointed to the “couple of dozen” special events that Edmonds hosts each year, including the seasonal Saturday market, as times when it’s most difficult to find parking downtown, Hope said.

A majority of survey respondents (58%) said they would be willing to use alternative modes of transportation, such as the bus (29%) or bicycling (23%), “if it were more convenient,” Hope said. Factors cited in not using the bus include a lack of familiarity with the bus schedule or stop locations and infrequent service. Those who said they would be interested in bicycling noted that safety is an issue, as are the steep hills leading out of downtown. Electric bikes might make it easier to get around, respondents said.

It was no surprise that metered parking wasn’t a popular idea, Hope said: 85% of those surveyed opposed the idea of adding parking meters downtown.

Sound Transit is also looking at options for increasing parking near its Sounder Train station, and conducted its own online survey, Hope said. Those results — and Sound Transit’s recommendations — will be presented to the council at its Dec. 3 meeting, she said. Sound Transit has said that $40 million would be available — split between the Mukilteo and Edmonds Sounder stations — to address parking improvements. One of the challenges is that Sound Transit funds can’t be used for operational improvements, like bus service or renting church parking lot spaces.

Economic Development and Community Services Director Patrick Doherty addressed concerns from survey respondents about how parking options could affect the character of downtown Edmonds. “Edmonds is known for its walkability and the fact that we don’t have large parking lots and things that break up the pedestrian flow,” he said.

There was a mixed response from respondents about the idea of structured parking, such as a parking garage, Doherty said. Positives mentioned included increased capacity for future growth while the negatives were cost, potential impacts to views or the character of the streetscape, and additional traffic generated by such structures.

A positive noted among survey respondents was the free after-hours parking lots provided by downtown businesses — mostly banks — through an arrangement with the Downtown Edmonds Alliance — although better publicity of that parking option is needed, Doherty said.

Downtown parking for employees was a concern, with employees noting they are “jockeying around for parking during the day,” having to move their cars to beat the three-hour limit, Doherty said. Employee parking permits are available to employers through the city for $50 annually per permit, and allow employees to park for longer than three hours.  But not all employees have those permits, Doherty added.

“It’s obvious that we need further study of the employee parking system,” Doherty said, “to understand if the issue is lack of parking or the fact that employers are not participating in the program.”

The so-called “tick marks” that have been placed downtown — which show people where to parallel park to make the most efficient use of space — are very popular and most motorists are using them correctly, Doherty said — although sometimes there’s a bit of a learning curve for drivers. The marks increase the amount of parking by 10% on each side of the street where they are placed. The new after-hours parking program — coordinated through the Edmonds Downtown Alliance and offered mostly by downtown banks when their lots are not being used — has also been popular.

Public Works Director Williams noted that initially the city did a pilot project with the tick marks on Main Street, marking 231 spaces, which he called the “low-hanging fruit.” Then this fall the city added 845 spaces, for a total of 1,081. With 10% increased efficiency with the use of the tick marks, the city was able to add about 100 additional parking spaces in the downtown core with virtually no capital expense, he said.

” I think that’s terrific,” Williams said. “We’re really happy with that.” The plan is to do the same markings on Dayton Street after construction work is completed there next year.

Doherty said that a majority of those surveyed (63%) believe that city could do a better job of managing existing parking through the use of tick marks, painted curbs, 15-minute loading spaces and ADA spaces. The importance of addressing sidewalk and streetscape improvements was also mentioned by 32% of respondents. In addition to sidewalks that pose a tripping hazard, barriers such as street trees, sidewalk cafes, mailboxes and newspaper boxes can make it difficult for people to walk to their destination if they do park a few blocks away.

The city should ensure that the survey responses are included in the scope of any future parking study, Doherty concluded. In addition, the city needs to have better data and analyses of existing employee and resident parking passes — “who’s using the passes, how often and are they at the right price point,” he said.  (Residents who live in certain downtown zones can purchase an annual parking pass for $25 that allows them to bypass the three-hour parking limit on downtown streets.)

Williams said he is hopeful that the city will still be able to conduct a parking study next year, to add more data that could show “where we have issues and where we don’t have issues,” and then present that information to the public.

You can review the entire survey here.

4 Replies to “Downtown Edmonds parking survey: People willing to park and walk, but barriers remain for those with mobility issues”