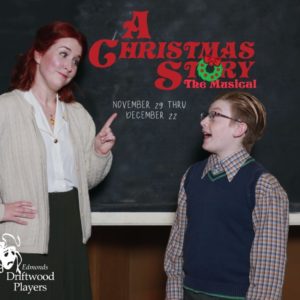 You’ll shoot your eye out.

Frageelay. Must be Italian.

I triple dog dare you!

It’s hard to find someone who wouldn’t recognize these lines. A Christmas Story, the 1983 iconic holiday movie, is hard to miss. It’s seemingly always on TV this time of year.

So bringing it to the stage — which Edmonds Driftwood Players will do from Nov. 29 through Dec. 22 — can be daunting. We can all picture Ralphie coming downstairs in his pink bunny pajamas, or The Old Man proudly displaying his leg lamp. Will we get the same experience seeing a musical of the same story?

“This is a very unusual circumstance,” says the show’s director, Diane Johnston. “Most of the time, the play comes first and then the movie. We really wanted to honor the movie while also telling our version. All the iconic moments are represented, but we don’t want to copy the movie. We want to tell it our own way.”

The most obvious change is that this is a musical. That helped ensure that the actors make the parts their own. The stars of the movie didn’t have to spontaneously break into song. That’s naturally going to change the performance.

“The fact this is a musical gave us a lot of inspiration to take it in a different direction,” Johnston said. “Some of the music pushes us through at breakneck pace and there isn’t time to emulate the movie because you’re jumping from lines to song to movement. It forces us to find new ways to tell the story.”

But what about the people who come to the show expecting the movie? How do you balance telling your own version while staying true to the original story?

“The fact that it’s a musical already sets an expectation that something has been changed and it will be different,” Johnston said. “Some of what people see will be familiar, but between the music, a different cast, a new production team, it’s going to be different. There’s a great balance between seeing something familiar and something new.”

While the Parker family is at the center of the story, it’s the other characters – bully Scott Farkus, Ralphie’s friends Flick and Schwartz, and Santa, who make the story complete.

Jonathan Olson, the show’s set designer, also plays Higbee Department Store’s Santa. To prepare for a role where he crushes Ralphie’s dream of getting a Red Ryder BB Gun for Christmas, he said he considered what it is to be a mall Santa Claus.

“He has to deal with more than a thousand kids a day,” Olson said. “He’s fed up, he just wants to go home but the kids keep lining up. How would that make you feel, to get 1,000 request a day that you can’t fulfill but you do your best. Kind of defeating.”

Most of the cast and crew said that while they’ve seen the movie, they didn’t watch it as preparation for this production. They didn’t want it to influence what they were presenting. Instead, they tried to research the world — 1940 Indiana — the story inhabits. That includes the costumes, props and style of dialogue.

For Olson, that meant finding a way to recreate the Parker family house.

“The pressure was to convey the time period to make sure the audience feels that while it’s not the same as the movie, they can relate to it,” he said. “They’ll be able to recognize that it’s a smaller home from a middle income family and it’s not immaculate but it’s livable, like the movie.”

Oh, and of course, there’s the leg lamp, the major award that Mr. Parker proudly displays in the family window.

“It looks wonderful,” Olson said. “We have limited space and limited resources being community theater, and from the set design to props to the cast, we’re volunteers and working really hard to give the community a great experience.”

Johnston is excited to show what her cast and crew have come up with. She said everyone, from the kids to the ensemble to the behind-the-scenes crew, have put in tremendous time and effort to do the story justice. And now they’re anxious to show the community what they’ve got.

“There’s a song in the show about how we’re counting down to Christmas and running out of time,” she said. “The lyrics have been popping into my head because that’s how I’m feeling. We’re almost at opening night and we’re just really excited to perform for everyone.”

Book by Joseph Robinette
Music and Lyrics by Benj Pasek and Justin Paul
Based on the motion picture A Christmas Story distributed by Warner Bros.