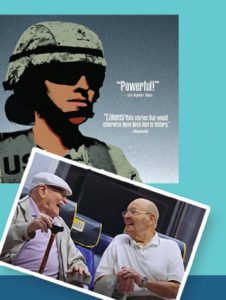 The Edmonds Diversity Commission this Saturday, Nov. 16 will present a free screening of two films featuring veterans:
– Lioness includes personal stories and struggles of the first group of U.S. women soldiers to serve in combat in Iraq.
– Charlie & Sam tells the story of two World War II soldiers reuniting for the first time since the war for a final farewell.

The screening will begin at noon Nov 16 at the Edmonds Theatre,
415 Main St., Edmonds.

Lioness presents the untold story of the first group of women soldiers in U.S. history to be sent into direct ground combat, in violation of official policy. Told through intimate accounts, journal excerpts and archive footage, as well as interviews with military commanders, the film follows five women who served together for a year in Iraq. Lioness is the first film to bridge the gap between perception and reality of the role women in the military are playing in Iraq, capturing an historical turning point for American society.

Charlie & Sam is set in 2016, when fewer than 5% of American WWII veterans remain alive. Follow 97-year-old WWII Naval Aviator Charlie Edwards as he travels to meet his old squadron mate Sam Takis for a final farewell.