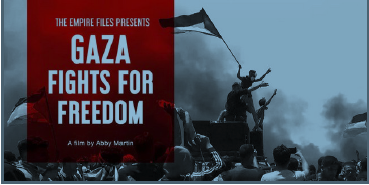 The Palestine/Israel Network presents the documentary Gaza Fights for Freedom by Abby Martin on Friday, Nov. 8, from 7-9 p.m. at Edmonds United Methodist Church.

The new film, described in a church announcement as “hard-hitting and sometimes violent,” will be introduced by Brian Baird, former congressman and current Edmonds resident. Baird, who has traveled to Gaza on five occasions, will also answer questions about Gaza and how Congress deals with the Israel/Palestine conflict. Light refreshments will be served.