London, after a seemingly endless disembarkation and bus ride to the capitol. Cunard does everything so well, but the trips are always bookended by an impossible website and a disembarkation process that borders on ridiculously inefficient. When the bus group was called to disembark 45 minutes late, with no information about what was transpiring, we then waited forever in the bus for a passenger who had somehow managed to leave a critical “medical bag” in the cabin.

Oh well, it was a glorious seven days, and we are in my favorite city in the world, putting up in the Strand Palace Hotel, which has undergone a dramatic do-over since last year – including the restaurant, which is much better, but not the breakfast, which remains the usual British Hotel Breakfast Horror, probably banned by the Geneva Convention, but still inflicted on guests in hostelries across England (I can’t speak for Wales or Scotland): watery scrambled eggs (I feel sure an egg was involved at some point), bacon which is largely fat, sausages that defy description but are popularly supposed to be how England gets rid of its sawdust, and which all combine to an effect that manages to be both tasteless and taste bad. It is a sort of negative culinary miracle — and it never changes!  The factory mushrooms add nothing of note.

Today, Karl and I took at train to Chatham, where we visited the Historical Naval Yard, the complex where among many other ships, HMS Victory, of Trafalgar and Nelson fame was built (the drydock is still in service). In the late 18th century the Chatham yards were at some 400 acres the largest industrial complex in the world, servicing the Royal Navy through the Napoleonic wars and down through World War Two into the ’80s. There are many exhibits, from an atomic submarine (built at Chatham) to one of England’s early steam-powered war ships, a large shed of life-saving boats, one of military vehicles, the original rope walk (where rope was made), an enormous forge, and what I found in its way the most fascinating, the “Namur mystery,” aka “the ship under the floorboards.”

In 1995 a discovery was made under the floorboards of the old wheelwright’s shop – the remains of an 18th century ship! It transpired, after much research, that these were the stored timbers of the Namur, a second- or third-rate battleship launched in 1756. All wooden ships reach a point of no repair, but as oak — the fundamental material of 18th century warships — was becoming dangerous scarce by the late 18th century, the custom was to save and store all usable parts for later construction or repair. No one is quite sure why Namur’s timbers were “laid to rest” as they were, but Namur was broken up in 1833, and 10% of her timbers put in storage. Boats for Sale, a UK website, suggests that “One of the theories is that the Admiral Sir James Alexander Gordon, the commanding officer at Chatham when Namur was dismantled may simply have been fond of the old ship, deciding to lay her bones to rest in peace all together, rather than put them to work separately.”

An interesting footnote to Namur’s story is that one of her captains was Charles Austen, a brother of Jane Austen. Olaudah Equiano also served aboard Namur, as a powder monkey; he went on to become an important figure in the abolition of the slave trade, collaborating with Wilberforce in that long campaign. 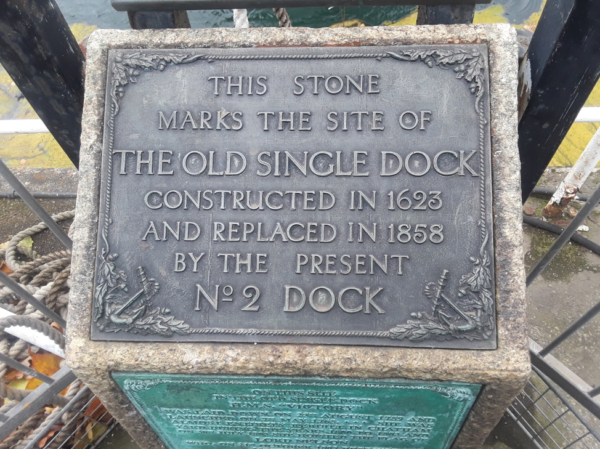 Now a rest day for me, but Ann and Karl went to Bletchley Park, near Milton Keynes, not far north of London. This was the center of WWII decoding  It has at Bletchley that the team that included Alan Turing managed to crack into the German Enigma codes, and it was not until the ’70s that the work done at Bletchley was declassified, so secret was its work. Today the site includes rebuilt huts as they would have been during the war, and also houses the National Museum of Computing.

From London we took the train to Bristol, where we are staying in the Bristol, Marriot Royal Hotel, of which I wrote about last year. Wonderful, friendly, big rooms, ready to help (but the usual British breakfast… ) There needs to be a system for rating “provincial” hotels, i.e.: those not in the big cities and not boutique “luxury” hotels. The Royal gets 5 Provincial Stars (except for the breakfast…).

Our reason for coming to Bristol was so Karl and I could (in Ann’s words) “geek out” on the old ships. On a former trip I wrote about the SS Great Britain, Brunel’s first great steamer of 1845 (see myedmondsnews.com/2017/10/travelogue-bristol-salisbury). This year it’s the Matthew, billed as a replica of the ship John Cabot sailed to “New Found Land” in 1497. Of course, the Matthew is not strictly speaking a replica, as no drawings are left of the original, but she is a painstakingly authentic replica of a typical caravel of the period. She is the real thing, a seagoing ship that was sailed to America in 1997 to mark the 500th anniversary of Cabot’s voyage. She is small – 78 feet, crew of 18 – and you can crawl all over her. Not much dry or warm to be found here, as she’s all open on the deck (the “castles” are open top the air). The period rigging is fascinating, as is the steering, which is by whipstaff, a sort of vertical tiller that communicates to the real tiller in the sterncastle.

On board Great Britain, we were delighted to see teenaged visitors being outfitted with climbing gear so they could go aloft via the ratlines, up to the main yard, 98 feet off the deck. Oh, to  be young enough to give it a go! If you look closely, you can see a figure out on the main yard in the picture below: 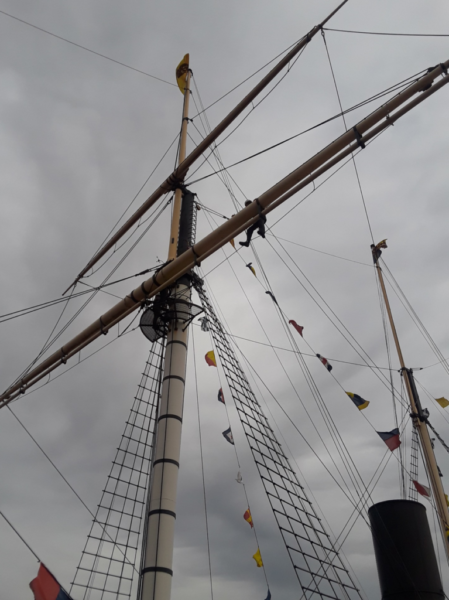 Another marvelous thing we saw was the STS Lord Nelson built in 1986 as a training ship, and along with SV Tenacious, one of only two tall ships in the world that are wheelchair accessible throughout.  Lord Nelson was decommissioned this year and her future is unclear, alas.

Now I’m in Tynemouth, near Newcastle, in the Grand, perhaps my favorite hotel anywhere, and a very clear Provincial 5-star!  Ask for a four-poster room – large, comfortable, and with incredible view out over the yellow sands on the beach to the North Sea. There’s a wedding party going on, so I’m in a lesser room, but the view is still wonderful. This is what I see from my second-story window over Hotspur Lane (after “that rude northern youth” Henry “Hotspur” Percy, 20 May 1364 – 21 July 1403 – see Henry IV, Part I). This is Percy country, the Percys being the great family that ruled Northumberland in the Middle Ages  — and everything is Percy this or that, or Hotspur something. 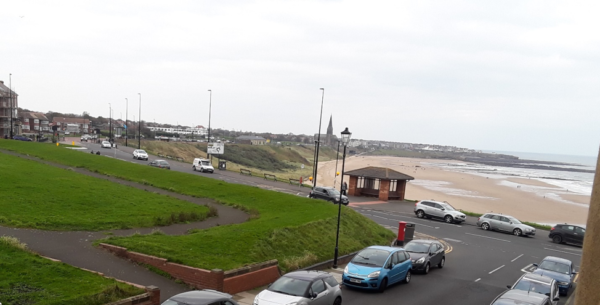 Last night three of us — Robert Gage. Mark Colley and I — had our annual “Musikabend,” an evening over very good cooking and very good wine, and lots of music. Mark cooked a lobster risotto with a touch of venison chorizo and tarragon, Robert did brill and duck, and we had the last movement of Bruckner 7 (Celibidache, Munich) and the last movement of  Mahler 3 (Bernstein NY Philharmonic), ending with a 2003 Tokaji Eszencia, a wine about which Hugh Johnson bursts into virtual poetry; only four releases in the last 24 years! Bed around 1 a.m., with the wedding still going strong. Today (Saturday) and tomorrow will be rest days so I can get off my leg (my left knee is sore and swollen), catch up writing, and spend quality time with Robert. Back to London Monday, then off to Paris, Morocco, and Spain if the knee cooperates. Decision time tomorrow.

Edmonds resident Nathaniel Brown taught and coached cross-country running and skiing for 16 years before joining the US Biathlon Team as wax technician, switching to the U.S. Cross-Country team in 1989. He coached at three Olympics and 14 World Championships, edited Nordic Update for nine years and Cross-Country Skier for two. He has written three books on skiing and training. He owned and operated Nordic UltraTune, an international freelance ski tuning service, until retirement seven years ago.