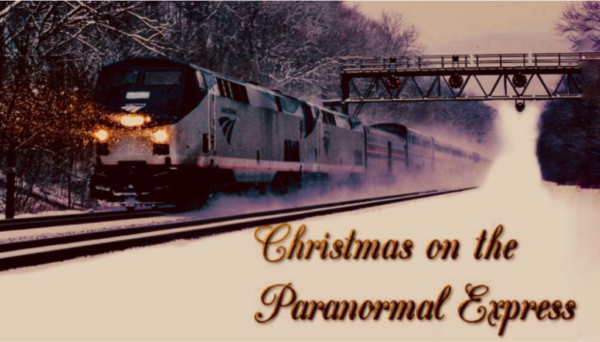 Without warning, bursting in through the sliding lounge car door, a strange incongruent couple presents themselves, dressed in either outdated or futuristic clothing (it’s hard to tell), coiffed in, if you can call it that, wispy blonde hair that announces them as ‘not being from around these parts’ (or any other recognizable ‘part’ for that matter), definitely in dire need of ‘something,’ given the stunned, faraway looks on their faces.

He, an awkward ‘30-something,’ tall nordic-looking fellow, a bit etheric and rough-edged, with blazing blue-green eyes, is supporting a much younger, and obviously in pain, female companion, who is clutching her very pregnant teenage stomach, attempting to control her involuntary breathing, which sounds like the chugging and hissing of a steam locomotive on its final downhill run — apparently in the mid-throes of what, under normal circumstances, would be a most memorable ‘blessed’ event! But, in this case, under more alarming circumstances.

The seriousness of the young girl’s predicament becomes immediately evident in the intense concern on Lori’s and Miss Trudy’s faces as they gaze with eyes wide open at the strange couple.

“Holy Sh—t!” barks Omer, springing to his feet and spilling hot chocolate down his pot belly.

The three Camo Dudes instinctively snap their collective attention toward the couple, their faces incongruently white with fear, in juxtaposition to their military garb and normal steely-eyed persona.

“She… we… help!” the man haltingly pleads, as the girl reaches for the nearest table to steady herself.

“Oh my Good Lord….!” croons Miss Trudy, bounding to the aid of the young mother-to-be. It’s immediately apparent that this surreal situation calls for quick action on the part of anyone even remotely versed in the delicate particulars of this kind of female predicament… which necessarily reduces the present qualified candidates to: Lori, Miss Trudy and a matronly Amish woman at the adjacent table, each of whom no doubt have put many uneventful years between themselves and their last birthing experience. But, this is no time to be picky!

Springing into action, Miss Trudy states with clear, calm intensity, “Bring her over here,” while at the same time simultaneously executing the old magic trick of whipping the linen tablecloths off two nearby tables, without even disturbing the utensils, and throwing them onto the table next to the bar. Lori and the Amish woman quickly fashion a make-shift birthing nest on the table with cushions, pillows and bundles of linen napkins.

“Her water… gone,” stutters the tall Nordic male, in a halting foreign-like accent, which under the circumstances no one deems important enough to clarify.

“No one’s leaving this car!” orders Lori, with the conviction of a Marine drill sergeant. “We need everybody’s help right here, right now… and any gear you have that’s useful.”

“Like what?” asks one of the Camo Dudes, in a broken falsetto.

With that, the tallest Camo Dude whips out a multi-tool from his utility belt and slaps it on the bar, attempting to make his own bee-line for the exit. Feisty Bodine stops him with more hutzpah than anything else and persuades them all to stand down on this strange, up until this point, ‘Silent Night.’

“Mary,” she gasps, in meek desperation between contractions that don’t seem that far apart. But, what do I know. I was honored, but weak-kneed, at each of my wife’s amazing births of our own children. However, if I had to write an essay on the pertinent details in order to pass the bar exam again, I’d likely be in different profession.

“And what’s your husband’s name dear?” says Miss Trudy, in deference to the possibility he may not be fluent in English.

The Amish woman props the young girl’s delicate shoulders with an extra pillow and a concerned look on her face that mirrors what we are all thinking… “a weird story?”

Miss Trudy gently lifts the girl’s dainty heels onto the bar just as a blood-curdling scream leaps from her small frame, making any follow-up inquiries a moot point.

A quick glance around the room finds each macho male frozen in his tracks and consequently useless for any practical support or assistance. So, Lori makes the executive decision to dismiss all ‘unessential personnel,’ in order to provide a modicum of privacy for the young mother-to-be and, more importantly, to reduce the rising tension in the makeshift maternity ward. As one can imagine, the lounge car cleared out quicker than the final bell on the last day of school, leaving only myself and Bodine to do the last-minute gathering of those traditional things required for such an auspicious occasion. Eventually, even Bodine and I are politely asked to take whatever male hormones we have left next door, so that the real business at hand can be accomplished. Neither of us objected. On my way out, I quickly remove my plush hoodie and give it to Lori for more padding or something.

Next door in the lounge car, Omer and his rancher buddies, Bodine and I, the Camo Dudes and the rest of the Amish Travelers all mill about, pacing and fretting and praying for a positive outcome. Not too far into the process, Lori pops in to give explicit instructions to the Camo Dudes, one of whom jumps on his “walkie” to request the nearest 911 operator send an ambulance to our next stop (which turns out to be Lamy, New Mexico) for medical transport – STAT….!

By the time everything is finally accomplished, a little baby girl is born in the lounge car of the “Southwest Chief,” just after midnight on Christmas morning, somewhere in the high desert north of Roswell, New Mexico. During a break in the action, and to allow the unique couple a few moments of postpartum privacy, Lori, Miss Trudy and the Amish woman join us next door to catch their breath. Bodine and his Amtrak colleagues pass around fresh mugs of hot chocolate in a celebratory scene that would have made Norman Rockwell proud.

Lori announces that the young mother has decided to name her baby girl, “Roz Desiree,” since she was born somewhere near “Roswell,” New Mexico, in the “Desert.”  Then Lori whispers to me that my hoodie came in handy as a make-shift swaddling cloth for the baby. But, she apologetically admits, the stains most likely won’t come out.  I give her a resigned “no problem” kind of smile, in genuine gratitude that all went well.

Unfortunately — or not — depending on your point of view, our impromptu celebration is cut short by the train screeching to an emergency stop at the Lamy station. Flashing lights from a local fire-rescue ambulance are waiting for us. Lori punches open the door between the lounge cars and meets the EMTs coming on board and leads them and their fully loaded gurney into the car next door. Instantly, we hear a scream that seems to come from Lori, but is quickly cut off by the door that slid shut behind them. Jumping back into action, Miss Trudy smacks open the door again and we all file in behind her to find out what “On God’s Earth, is happening now…!’”

Unbelievably, in the lounge car before us, the scene is, well, unbelievable…! It is totally devoid of any evidence of the frantic emergency situation we had all participated in only moments before –and the maternity services that were so expertly applied by Lori, Miss Trudy and the Amish matron.  All of which were witnessed by each one of us at one point or another. The table next to the bar looks untouched. The linen tablecloths are neatly back on their tabletops, with the utensils still in place. The pillows and stacks of linen napkins are back where they belong.  And my supposedly soiled and crumpled I Stormed Area 51 “swaddling cloth” hoodie is folded, looking brand new with a slight smell of incense about it, laying at the business-end of the bar with an old-fashioned silver sleigh bell and golden round-trip train ticket placed on top of it!

Prompted by Lori, we search every inch of the “Southwest Chief,” but cannot find the strange couple or their newborn child anywhere…! Not in the restrooms or the sleeper cars or roomettes or coach or even the baggage car. As it turns out, no couple is even listed on the passenger manifest with the names ‘Joe and Mary!’ It’s as if they just disappeared into the desert night without a trace. The initial sideways glances we receive from the local EMTs are immediately met with solid confirmations from each of the Camo Dudes, as well as the rest of us, including the Amish woman, who seems to solidify the veracity of our story for the EMTs.

As the train pulls out of the station, our rag-tag group of ‘nativity-scene’ players, confused and exhausted, settles back down at Bodine’s bar for one last round of hot chocolate… more than a little perplexed. Eventually, I glance at my watch, then at both of them (my analog “Invicta” on my right wrist and my digital “Apple Watch” on my left), and notice they both read 3:33 a.m.…. But, how can that be? Baby Roz was born not that long after midnight, and the Camo Dude’s call for the ambulance couldn’t have been much later than 1:30 a.m., I think….  I casually mention this discrepancy to Lori and Miss Trudy, who both check their watches, prompting everyone else to do the same. All our timepieces and smartphones, including Bodine’s wind-up pocket watch, are pretty much synced to the same ‘witching hour’ of approximately 3:30 a.m. But, no one can remember the approximate two hours of “missing time” that seem to have passed without our knowledge or recollection. The large-faced clock behind the bar has stopped at 1:37. But, of course, its lone double-A battery may have coincidentally just given up the ghost at that time earlier this evening…?

All and all, it turned out to be quite a memorable Amtrak Christmas. Seemingly, a brand new Soul began a hopefully-long life journey here tonight on a linen-covered table next to the bar, sometime (we think) early Christmas morning. Not all that unsimilar, actually, from that first blessed Christmas in the tiny desert town of Bethlehem, so long ago. But this time, instead of a lowly stable, it was the lounge car of the “Southwest Chief.” And instead of shepherds abiding in the fields, we had local cattle ranchers and Amish travelers attending the blessed event. And in place of Wise Men from the East, there were Camo Dudes from “Area 51.” And little Roz Desiree’s “swaddling cloth” ended up being a cozy I Stormed Area 51 “Alien-Head” hoodie.

I’ll bet she turns out to be quite an amazing young lady… whomever and wherever she is.

Yes, Virginia, there is a “Paranormal Express!”

One Reply to “Christmas on the Paranormal Express: A holiday essay, Part 3”