From options for Sounder train commuter parking to a proposed utility rate increase, the Edmonds City Council discussed a range of topics during its’ three-hour-plus meeting Tuesday night. But councilmembers ran out of time to talk about amendments to the proposed 2020 budget, and that topic was postponed to the council’s Dec. 10 meeting.

The council did take time at the start of the meeting to honor Edmonds photographer Bill Anderson — a long-time contributor to My Edmonds News — for his work to photograph the Edmonds Marsh and its wildlife. Anderson received a standing ovation during Tuesday night’s meeting after Mayor Dave Earling proclaimed Tuesday, Dec. 3, 2019 as Bill Anderson Day in Edmonds. The proclamation acknowledging the efforts of Anderson — assisted by his son Daren — to capture the beauty of the marsh and document its environmental contribution to the area. Anderson was also recognized for his long-time volunteer service with Puget Sound Bird Fest. Several speakers lauded Anderson during the council’s public comment period. “He is truly an Edmonds treasure,” said Kathleen Sears.

The council did take action on several items, including:

– Approving the city’s 2020 state legislative agenda. This approval came after Economic Development and Community Services Director Patrick Doherty outlined the priorities that had been identified in conjunction with the city’s lobbyists, current and incoming members of the city council, the mayor and city staff. Areas of emphasis include asking the legislature to reappropriate the $6.2 million designated for the now-defunct Waterfront Connector project to Highway 99 redevelopment; requesting $500,000 from the state capital budget to assist the city in defraying the cost of the pyrolysis project that will replace the current sludge incinerator at its wastewater treatment plant; and acquiring state support for a memorandum of understanding regarding future use of the former Unocal site south of the Edmonds Marsh for Willow Creek daylighting. The legislative agenda also includes receiving funding and support to implement the work plan associated with Edmonds’ designation as the state’s first Creative District, funding to build the Edmonds Waterfront Center to LEED Gold-certified standards; and addressing the funding losses from Initiative 976, the so-called $30 car tab measure.

– Authorizing, unanimously, a housing-related Comprehensive Plan amendment that calls for the Edmonds Citizens Housing Commission to provide housing policy options by the end of 2020 for city council consideration.

— Approving a budget amendment of $4,500 to fund a Feb. 7 retreat aimed at providing training for new city councilmembers.

– As part of its consent agenda, confirming the appointment of Nikki Okimoto Glaros and Sekou Koné to the Edmonds Diversity Commission.

In addition, the council: 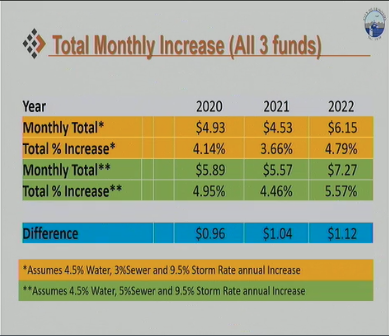 — Held a public hearing but did not make a decision on a proposal to raise utility rates for the next three years, from 2020-2022. The proposal recommends a 5% annual increase in sewer rates, a 4.5% hike in water rates and a 9.5% increase in stormwater rates — to cover rising operating and capital costs as well as the higher costs to purchase water. To keep the sewer rates lower, Edmonds is also looking to sell bonds to fund $10 million for the city’s portion of a project to replace the wastewater treatment plant’s sludge incinerator with the pyrolysis project. (The total system cost is initially estimated at $20 million but the City of Mountlake Terrace, which sends sewage flows to Edmonds to be treated, will pick up the remainder.) If the city chose not to sell bonds and instead followed a “pay as you go” policy — which it has been doing for the past nine years —  the sewer rates would be higher — an 8% annual increase. Some councilmembers said they were interested in seeing what the cost would be if the city looked at selling 30-year rather than the currently proposed 20-year bonds, to take advantage of very low interest rates. Public Works Director Phil Williams said he would come back to the council next week with that information.

— Heard a presentation from Sound Transit about options for parking and access improvements at the Sounder commuter train station in Edmonds. The impetus for these improvements is $40 million in funding approved by voters in 2016 as part of ST3, and would be split between the Edmonds and Mukilteo Sounder train stations. For Edmonds, there were a total of 22 separate options evaluated, including potential remote parking sites, additional bus bays to facilitate intermodal connections, bicycle path enhancements, and upgraded pedestrian access and lighting improvements. Feedback received during both online and in-person open houses revealed the strongest support for aligning transit schedules to reduce the need for driving to the train station, plus strong support for providing increased parking near the station. There was also positive feedback regarding pedestrian lighting and crossing improvements. Remote parking options received the least support. Mayor Dave Earling stressed that one of the options initially on Sound Transit’s list — providing parking at the city-owned parking lot at Artworks at 2nd Avenue and Dayton Street — was not being considered further due to public concerns about the idea. The next step will be to advance the draft project list to the Sound Transit Board, which will make the final decision on which projects to build or fund.

– Received a quarterly report from Development Services Director Shane Hope on the newly-formed Edmonds Citizens Housing Commission, which has been meeting monthly since September. So far, commission meetings have focused on training and presentations that have provided housing-related resources, data, definitions and policies, Hope said. In 2020, the commission will focus its work on prioritizing preferred policy topics and working in small committees to draft proposals for those topics. Gathering public input on those ideas will also be a high priority, she added.

— Story and photo by Teresa Wippel