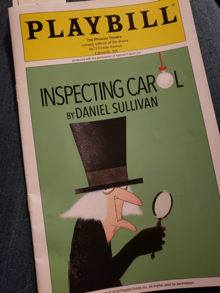 Inspecting Carol is a behind-the-scenes look at a struggling theater’s annual performance of Dickens’ A Christmas Carol. Be ready for some witty one-liners and great acting while the production plays with archetypes and pokes fun of stereotypes in a theater company.

This mature comedy portrays a bumbling theater troupe, each personality well-defined and brought to life through a seasoned and accomplished cast of actors. The sets and lighting are perfectly designed to transport the audience, feeling as if we are truly getting a window into this company’s struggles. The characters’ personalities are aptly portrayed, coming together with clashing egos and hilarious missteps.

The mistaken identity of an aspiring actor as an auditor from the National Endowment for the Arts leads to the company trying to fall over themselves to impress him so they don’t lose their funding.  The premise results in many hilarious changes to the production and funny personality clashes.

Though the play builds to its side-splitting climax at the end, my personal favorite scene was the theater warmups in the beginning; the lemon exercises were spit-out-your-drink funny.

If you are looking for something different, and a way to break up the typical holiday stories, this satire is the perfect fit. It will be a special treat for anyone who has spent any time in the theater or working together in a creative production. There are still tickets for this Friday at 7:30 p.m. and Sunday at 2 p.m. Learn more at www.tptedmonds.org.

2 Replies to “Inspecting Carol: A case of mistaken identity kicks off a path of absurdity.”