As I traveled east on 196th crossing into Lynnwood the other day, I noticed the Chinese fast food restaurant Oh Yeah Tasty has closed. I for one, will miss them. After reading Yelp reviews, I discovered that people both adored and disliked Oh Yeah.

Can I make a suggestion? If you choose to write a Yelp review of a restaurant you don’t like, could you pretend that the owner of that restaurant is standing in front of you? Some of the comments I read are so incredibly mean-spirited it’s as though the reviewer doesn’t realize that real, flesh and blood people — often trying to do their very best — will be expectantly reading these reviews. Try to put yourself in their shoes. Constructive criticism is one thing, but nasty, rude, mean-spirited comments are quite another.

New ownership has arrived. Out of the proverbial ashes of Oh Yeah Tasty now stands China Café. We dropped in for dinner Thursday. The owner was busy decorating the place for Christmas, and doing a nice job of it. The tree was trimmed out beautifully.

It hardly seems possible that China Café has been open for three months, but that’s the answer my inquiry received.

Our initial impressions were all good ones — they’ve retained the nice design elements of O’Yeahs, although the soup bar is gone. The place is immaculately clean from top to bottom, something I always appreciate. The voluminous menu, also sparkling clean, boasts nine — count ‘em nine — milk teas. On one page alone, intriguingly entitled “Grandma’s Specials,” 20 entrées appear. There really is quite a lot from which to choose.

Our server was very attentive and gracious without hovering — in short, she provided great service.

But the best service in the world can’t help you if you don’t give some thought to your order.

Dumplings tend to be a pretty safe bet for us; we chose the pan fried over the boiled option. They came out perfectly browned and accompanied by a simple sweet soy dumpling sauce, which complimented the dumplings nicely.

My son decided that the General Tso’s chicken would be a good litmus test — a test they passed with flying colors. My partner felt safe ordering the cashew chicken with brown rice, which she was pleased to discover was served with a flavorful brown sauce, fresh vegetables and a generous portion of cashews.

I took another tack.

Still kicking myself for failing to muster the courage to try the frog hot pot at Oh Yeah, I thought I’d give the “braised pork intestines noodles“ a whirl. I was very pleased with the outcome. Although salted a bit more than I prefer, that was my only quibble. The broth was dense and pleasing with a nice umami richness to it. The rings of braised intestines not surprisingly reminded me of tripe and were very good. You may think you wouldn’t eat intestines, but in truth, if you’ve ever eaten a hot dog or a sausage, there’s a very good chance you’ve had intestines.

In summary, we were all very happy with our food. As we finished up, our server brought out a complimentary dessert — a creamy mango parfait that was a wonderful finale to a very satisfying meal.

At the end of it all, we left feeling that we’d been treated well and charged fairly.

We can add another name to the list of nice, clean, inexpensive, and delicious sit-down restaurants in our area. China Café. 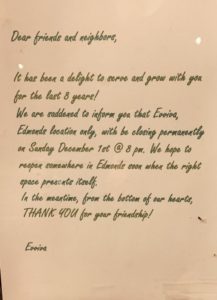 I was dismayed to see that Edmond’s sole Neapolitan-style pizza place had closed its doors.

Evviva has been a mainstay for many of us, long before the big redevelopment brought the Cascadia Art Museum, 190 Sunset and other tenants to the shopping center now known as Salish Crossing at the corner of Sunset and Dayton.

You could always rely on owner Luan Berisha to come up with delicious combinations on his menu board. Who would’ve thought that Yukon Gold potatoes and prosciutto would taste good together on a pizza?

When we dined in, I was always impressed with the parade of take out customers that came and went. Evviva did a pretty brisk business.

As is evident from the sign posted on their door, Evviva may return to Edmonds under the right circumstances.

We’ll keep our fingers crossed that a space will open up around town that will be able to accommodate them. In the mean time, you can always run down to Queen Anne, where Berisha opened a second location in late 2017.