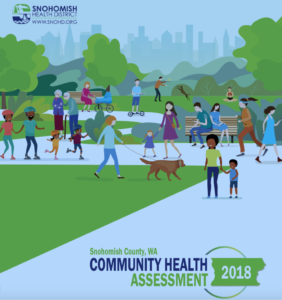 New data released by the Snohomish Health District confirms that suicide, opioid misuse and youth mental health are among the top health issues in Snohomish County. But the county’s rates of homicide, cigarette smoking, melanoma deaths, lung cancer deaths, youth driving impaired, deaths due to motor vehicle crashes, and children living under the federal poverty level are faring better when compared to state and national rates.

These topics and more are included in the health district’s newest Community Health Assessment available online at www.snohd.org/CHA2018.

Starting in 2018, district staff and community partners analyzed more than 150 health indicators for the report. These include disease rates, leading causes of death, health risk behaviors, and social determinants of health such as housing and access to health care.

A data task force made up of the Public Health Advisory Council and other subject matter experts provided input over the course of about eight months in 2018. They looked at how the indicators were trending over time, how countywide data compares to state and national data, and how Snohomish County compares to benchmarks.

Population-based health data is the best quantitative data to use in a community health assessment, the health district said in announcing the report. This data is accessible at the county and state level, and all data sets have been deemed statistically reliable and valid. Benchmarks were also considered, like the Healthy People 2020 goals set by the U.S. Department of Health and Human Services. When feasible, demographic data such as race, ethnicity, gender or age were examined at the sub-population level to identify disparities.

Of those 150 indicators, the task force identified eight priority topics for further evaluation:

The 2014 Community Health Improvement Plan focused on obesity, suicide and youth physical abuse. With this 2018 Community Health Assessment report complete, District staff will begin convening civic leaders, community members, and non-profit organizations in a process to develop a new community health improvement plan centered on suicide prevention in Snohomish County. It is anticipated that strategies to improve youth mental health will be incorporated within that process as well.

When it comes to opioid misuse, district staff and the task force acknowledged that a separate community health improvement plan was not needed. The Opioid Response Multi-Agency Coordination (MAC) Group in Snohomish County is already focusing on this as a top issue, along with the increasing prevalence of fentanyl.

Additional data sources were updated mid-2019 and reviewed by the data task force, but the top issues remained relatively unchanged. However, recent concerns about vaping and e-cigarettes and an alarming increase in youth using vapor devices were noted. The data task force has deemed vaping an emerging issue to be monitored, and possibly explored further in a more detailed briefing in 2020.