Follow along as Edmonds resident Michael W. Hall keeps a journal of his trip on the rails for the holidays. Hall left the Edmonds Amtrak station Christmas Eve, and is headed east by train to “The Big Apple” for New Year’s Eve.

Boarded the Amtrak “Empire Builder” at the Edmonds Station at 5:12pm sharp.  They don’t mess around with their schedules on the rails. Found a spot on the main level of the second-to-last Coach car to stow my heavy rollaway luggage, then walked up to the second level to be seated by the conductor next to a perky young woman from Ephrata, Wash.  I’m surprised how roomy and spacious the Coach class seating spaces are. Plenty of room to stow the immediate gear I will need for the next few days’ trip to Chicago.

Heading north out of the Edmonds, WA Station. This is a blast…..!  The gentle rocking and rolling of the rails are so relaxing…..! I’m seated at a linen-covered table in the dining car, just relaxing with all the wonderful holiday travelers…..

Christmas breakfast in the dining car; great coffee, scrambled eggs, potatoes, bacon and croissant with orange juice.  Enjoying the wintery white of my first real glimpse of snow outside the slowly emerging dawn on Christmas morning as Whitefish, Montana flows effortlessly by my window.

Listening to Christmas stories and hometown holiday conversation emanating from the breakfast tables around me. A woman mentioning her memories of Christmas morning when her mother would prepare homemade cinnamon rolls on Christmas Eve, then pop them in the oven early Christmas morning and the house smelling cinnamon sweet for Christmas.

Conservative Amish travelers dressed in black, sitting down for breakfast as we pull out of Glacier National Park. A slow meandering creek mirrors our path through the bare cedar forests gliding silently by on either side of the train in the frozen world, just inches away outside the dining car windows. It’s warm and congenial here in the dining car as the picture-perfect winter world passes by on Christmas morn….

I can’t help feeling, as we head further and further into snow country early Christmas morning, that we are on the Polar Express, slipping further and further toward the North Pole to Santa’s workshop and the Kingdom of Elves, for ‘The First Gift of Christmas!’  Quickly, I check my pockets to make sure there are no holes in any of them, just in case.

The Izak Walton Inn is a small destination resort lodge tucked away in the Montana evergreens next to a winding winter river.

Amish Friends are speaking a rapid-fire dialect of Pennsylvania-Dutch Low-German from Minnesota, with a few English words sparsely peppered throughout their congenial conversation. 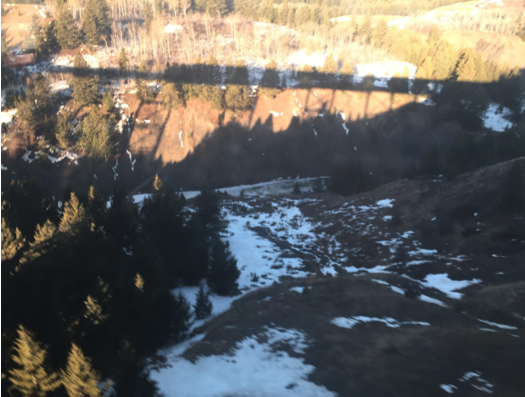 Gliding through mountain valleys full of snow and alpine forests, passing a freight train paralleling our way on a nearby mountain. A trio of conservative Amish Friends softly singing (accapella) Pastor Franz Gruber’s Classic, hastily composed, “Silent Night;” their dulcet tones accompanying the frozen spectacle outside, reminding us all of the real meaning of Christmas. 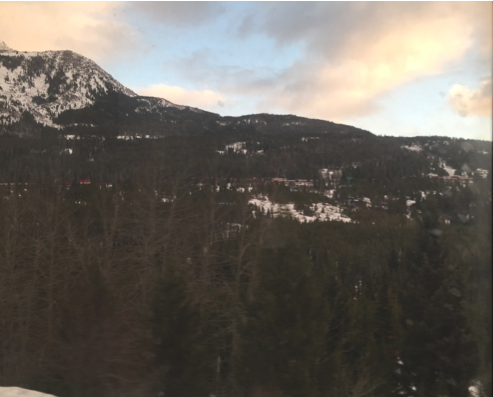 The morning sun peeking out from behind large, lonely clouds set against an otherwise clear blue sky. The winter countryside becomes bathed in warm sunlight, brightening the rolling mountain terrain that stretches as far as one can see in every direction. A frozen, snow-covered lake fills the valley below our winding track through the winter wilderness. 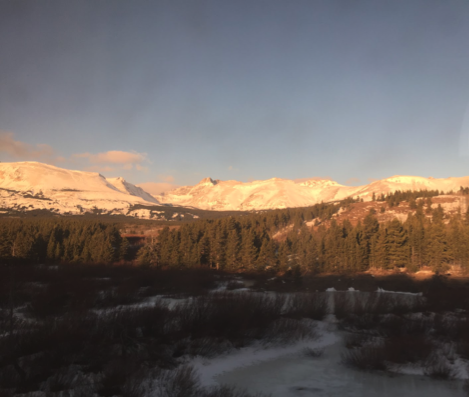 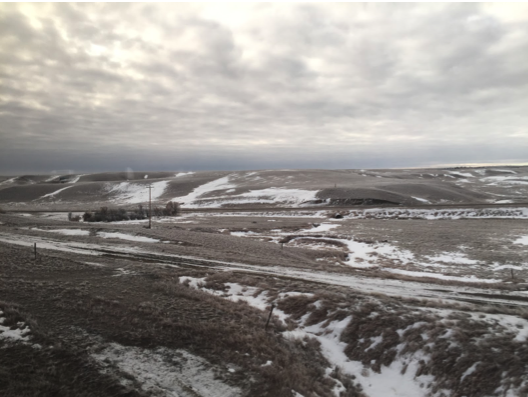 Beautiful snow-covered winter plains as far as the eye can see…! 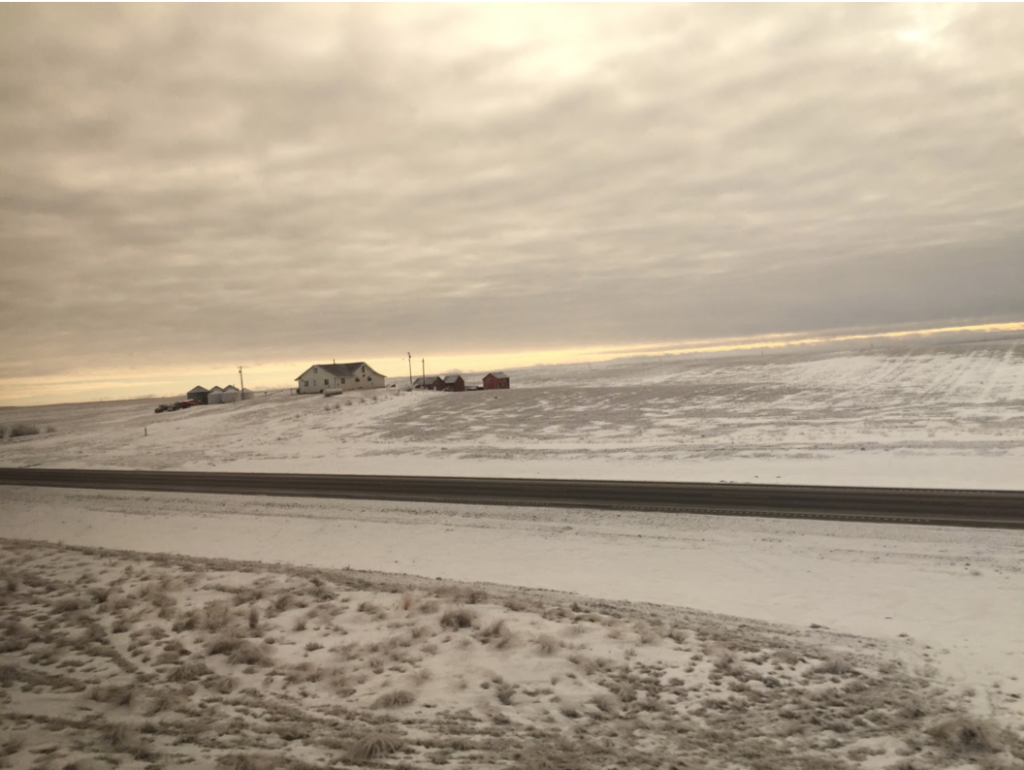 Rolling through the vastness of our land, as it stretches endlessly in all directions, it’s easy to get lost it’s vastness and the hours and hours of glorious empty spaces, just waiting for us to behold….

“Montana Bar” (Still no WiFi….)  It’s like being on ‘The Dark Side of the Moon.”  Actually, they probably have better connectivity on the Moon!  Just saying…. 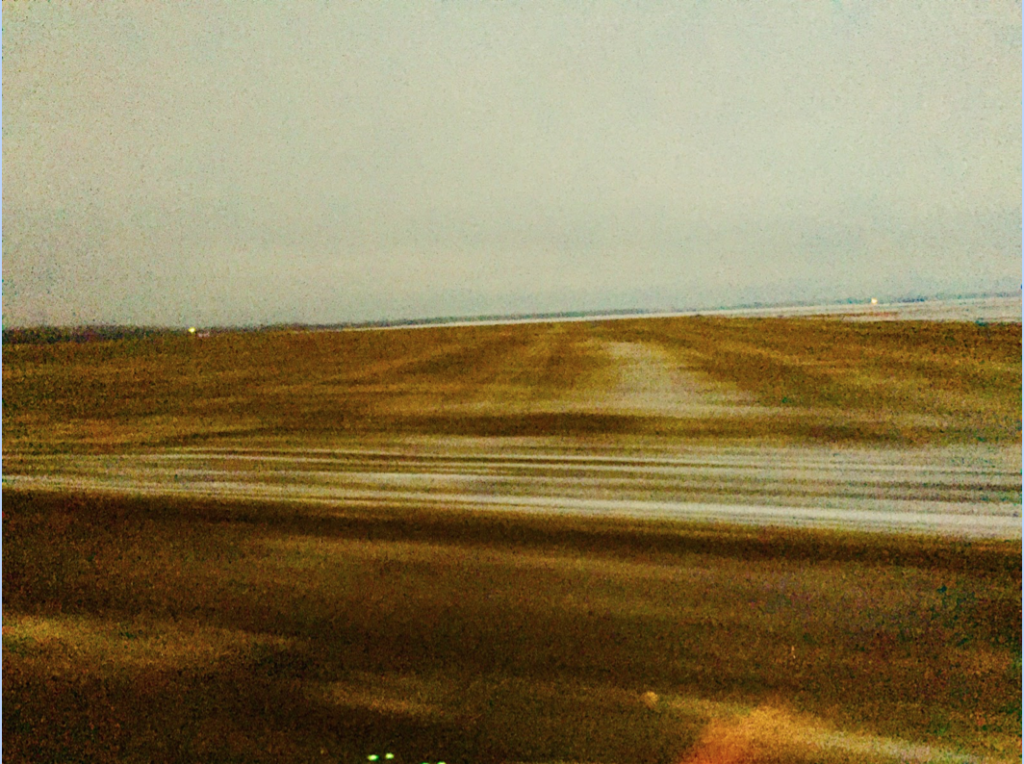 “Not a creature was stirring; not a cell tower in sight….” 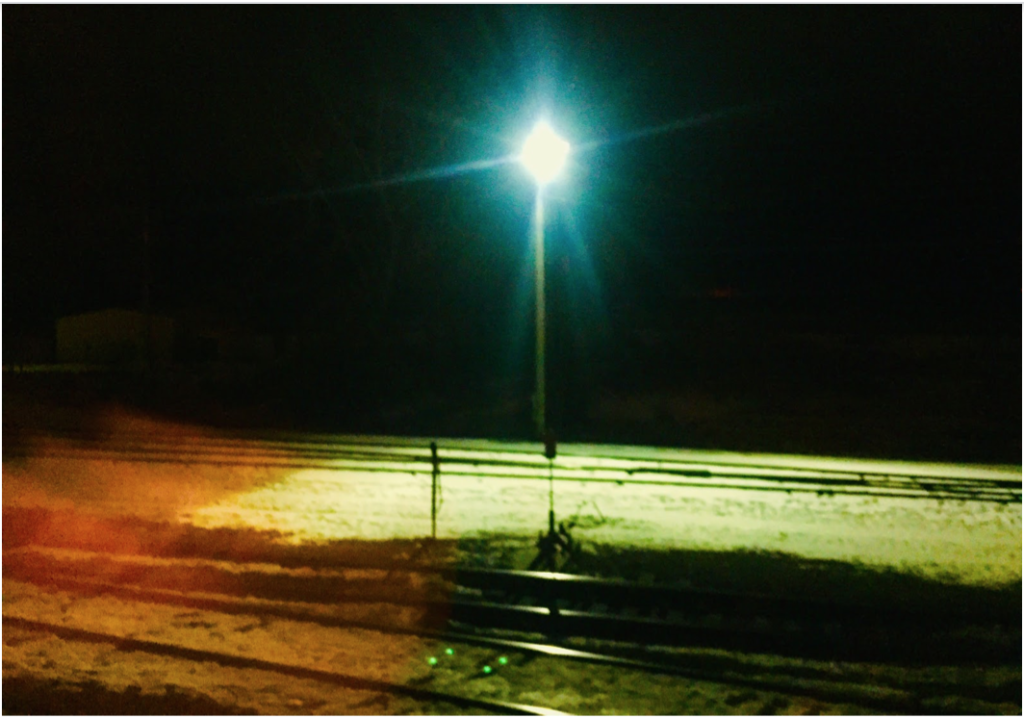