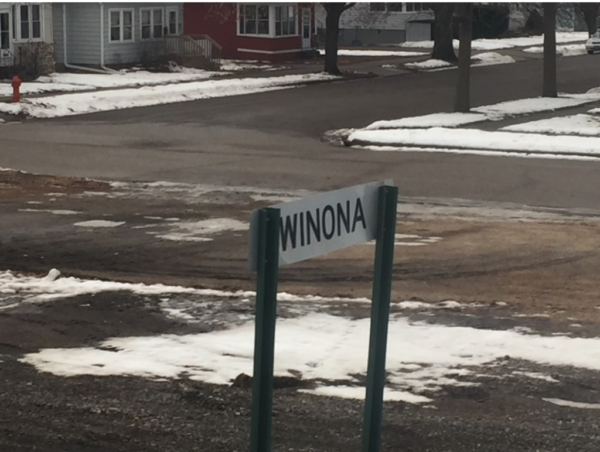 Follow along as Edmonds resident Michael W. Hall keeps a journal of his trip on the rails for the holidays. Hall left the Edmonds Amtrak station Christmas Eve, and is headed east by train to “The Big Apple” for New Year’s Eve.

Early morning breakfast at ‘Zero Dark Thirty’ in the dining var; three big pancakes and multiple smooth cups of great Empire Builder coffee, during an hour-long stop-over in St. Paul, Minnesota.  Seated with a retired, local career-Sheriff’s Department “Chief Deputy,” who happens to have an inquiring, ‘conspiracy-theory’ curiosity like myself. Interesting conversation about UFOs, 911 and the JFK Assassination.  The Chief is heading to Chicago to visit his youngest son who is a relative ‘Newly’ in The Secret Service, still single and climbing the Federal Service ladder. This son used to fly drones in Afghanistan, from Minot, ND for the Federal Aviation Service for approximately 12 years.  But, now he has transitioned to the white-collar crime arena of Federal Law Enforcement. I gave the chief my “Paranormal Lawyer” business card, which he appreciated… and gave him an extra one for his son. Who knows what that might lead to… or not.

Looks like a ‘Castle Rock’ on the hill in the background. 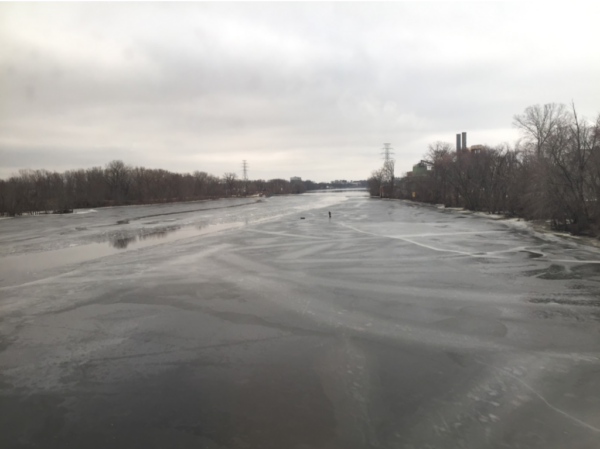 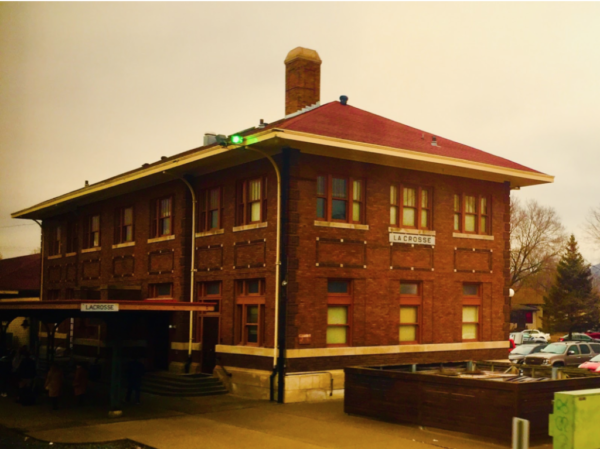 Up until this point feeling as if I was traveling alone, I suddenly find myself surrounded by (or more accurately agreeably ‘embedded’ with) a gregarious gaggle of Old World Amish who quickly rushed aboard. Dressed quite conservatively in long flowing black coats, dresses and comfortable overcoats, speaking and joking unabashedly in Pennsylvania Dutch/German. Expertly making themselves comfortable, obviously well-traveled, having no compunction conversing in their native tongue surrounded by the other ‘English’ travelers. One of the middle-aged, bob-haired gentlemen and his bispecticaled, ‘Nun-like-hooded’ wife across from me begins munching from a bag of glowing orange Cheetos, sharing a Tupperware bowl of fruit cocktail on their way to Chicago. A younger Amish fellow is assigned the seat next to me by the new, officious female Conductor who rides herd on us all, as she makes sure all the remaining seats are filled seamlessly on an equal opportunity basis. My young seat companion eagerly jumps into his own large quart mason-jar full of canned fruit, of what looks like peaches, and a big, home-made slice of traditional pumpkin pie. In his simple black carry-on bag, I see he is toting an issue of “Hunter’s Journal” (Hunting Stories from the Early 1900s) magazine next to his Coleman Thermos of most-likely plain water to drink.

The short fellow and his wife across from me have a snack of Fig Newtons and red grapes. The young fellow next to me creatively stacks a sandwich of thick and heavy whole-wheat bread (one thick slice) topped with generous slices of Spam and real chunks of cheese, which I can tell has not been artificially colored. It’s a natural light orange, not brightly colored. It all looks very delectable and filling. 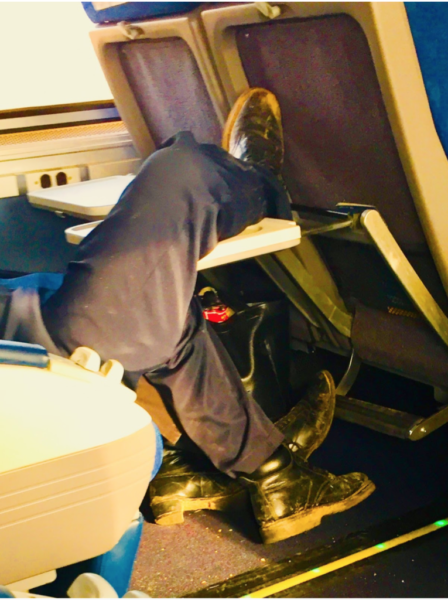 Sturdy Amish footwear, functional and practical, for both husband & wife. “Holy Schmokadoodles….!” (I think I heard that right.)  Nap time on the train…. 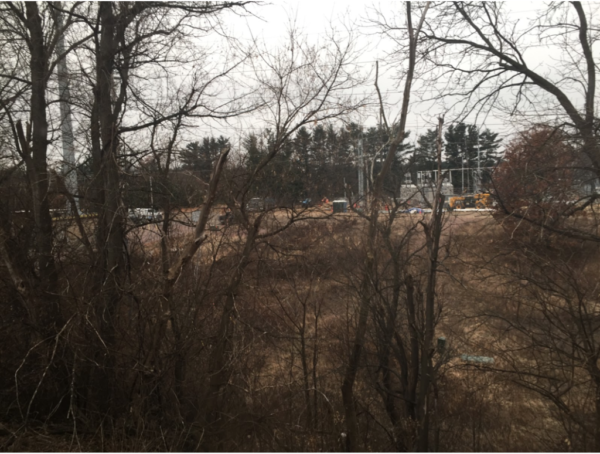 Very gray skies, not much snow on the ground.  Holiday wreaths on the Main Street light poles.  Wintery, leafless trees scraggled and bare, standing lonely against a close, gray sky. 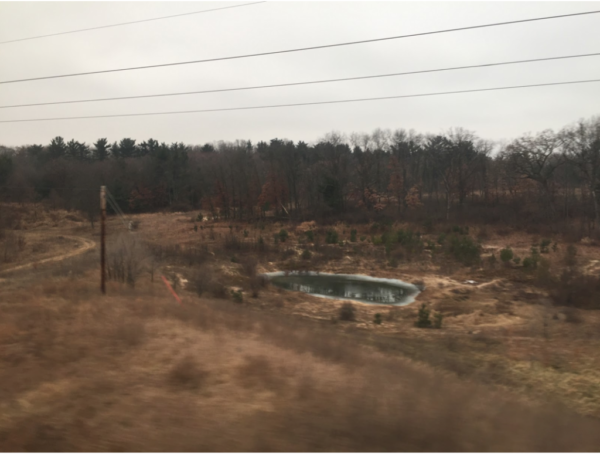 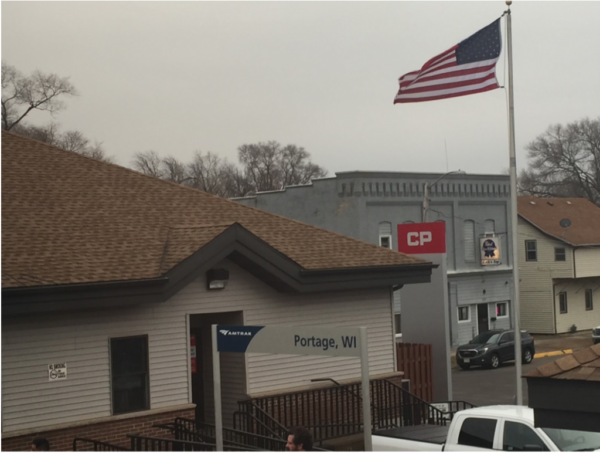 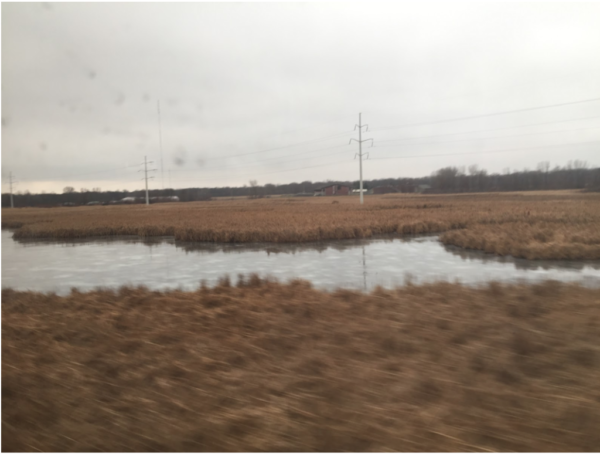 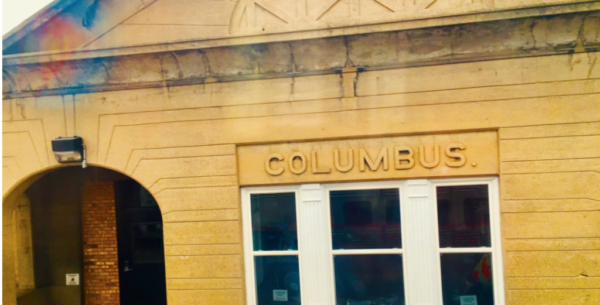