Edmonds resident Michael W. Hall continues his trip on the rails for the holidays. Hall left the Edmonds Amtrak station Christmas Eve, and is headed east by train to “The Big Apple” for New Year’s Eve. 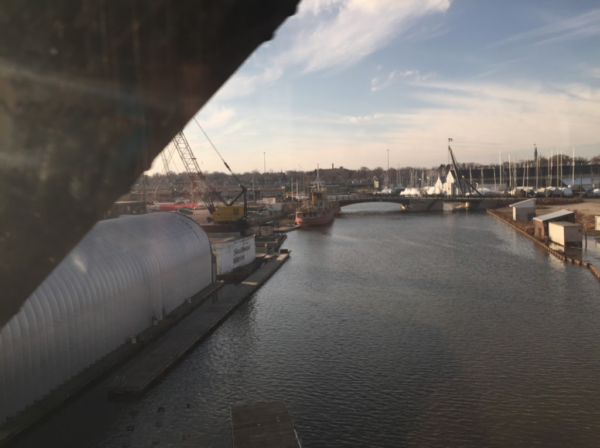 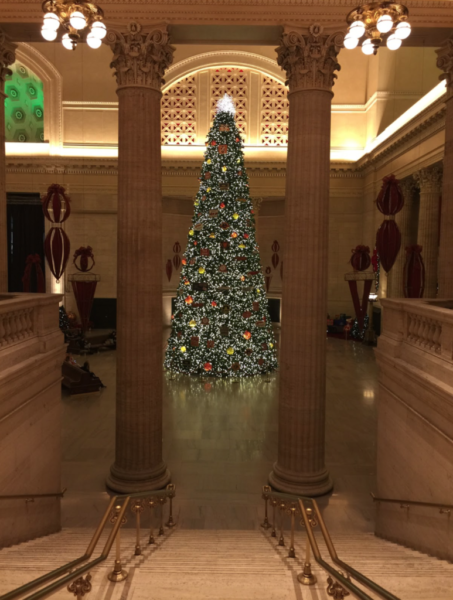 Arrived at Chicago’s Union Station, checked into the Amtrak’s Passenger Lounge, got something to snack on and drink. Walked around and checked out the amazing 50-foot, decorated Christmas tree in the lobby and all the wonderful holiday decorations.  Massive illuminated wreaths and a complete “Polar Express” locomotive and gift shop. I purchased a souvenir “Polar Express” Conductor’s Pocket Watch to remind me of this epic trip. 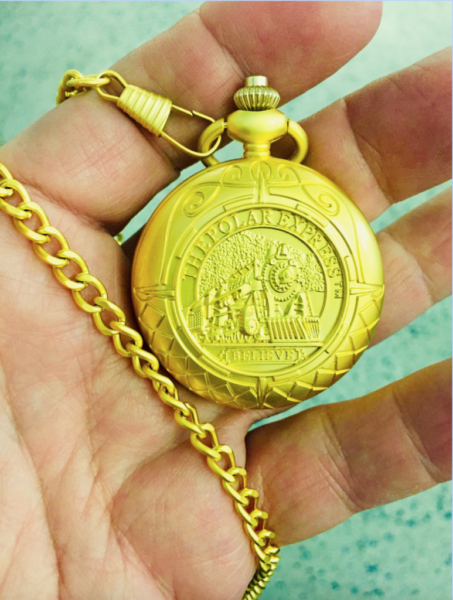 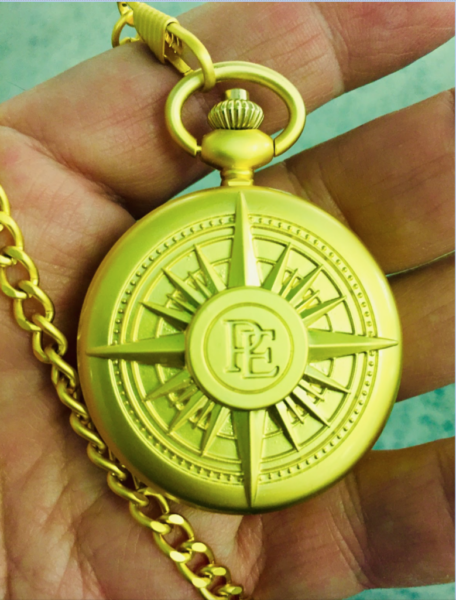 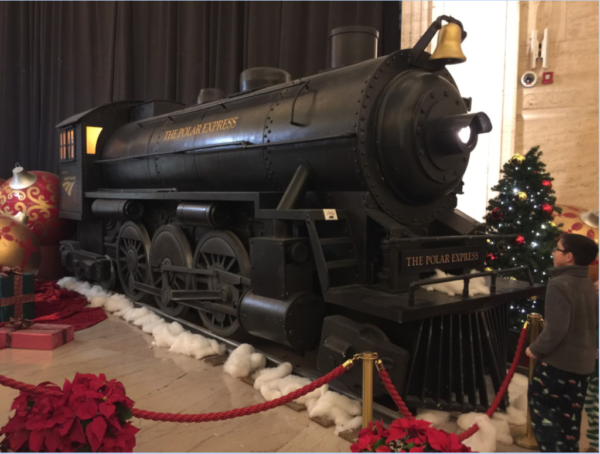 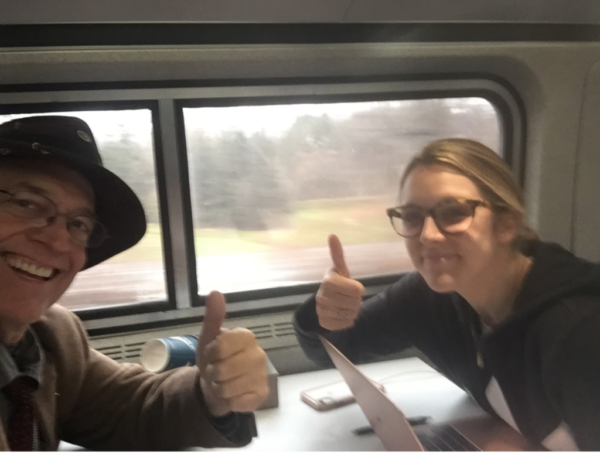 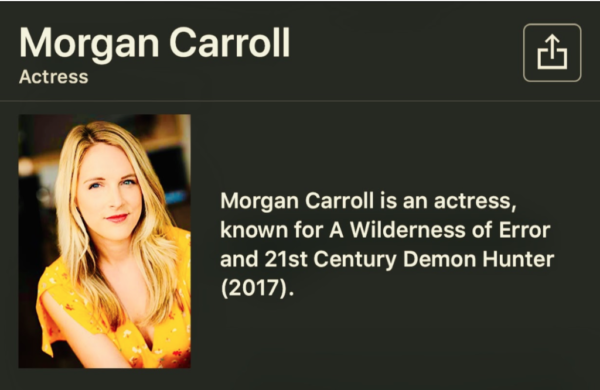 Coffee and a blueberry muffin in the Amtrak Club Car, just out of Buffalo-Depew, NY, where I was joined by the young and delightful New York comedienne, Morgan Carroll, who was coming back to “The City” from visiting her family for the holidays.  Blonde and perky, with a husky, sexy voice, she hosts her own internet Tele-Series called “Obviously Not LinkedIn,” where she interviews interesting people in and around The Big Apple who have memorable professions.  She just finished taping a fascinating interview with pop star Joe Jonas, who recently tried his hand at her profession of stand-up comedy. Morgan generously agreed to be his opening act at the famous Manhattan “Comedy Club,” in order to teach him the ropes. Joe was grateful for her guidance and encouragement. Another star’s career is born….! 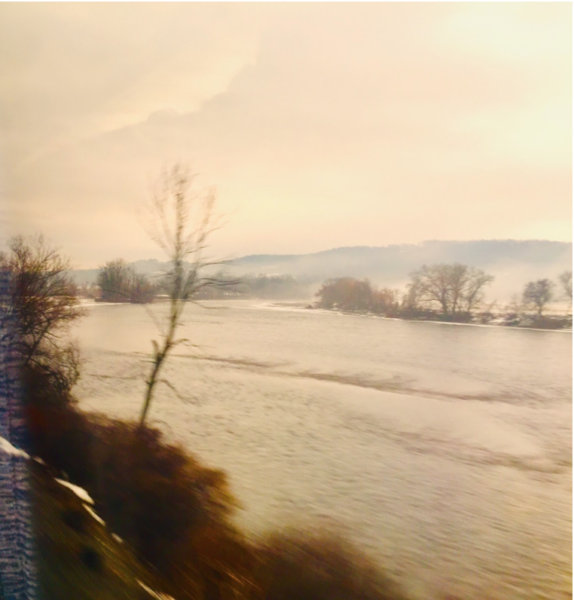 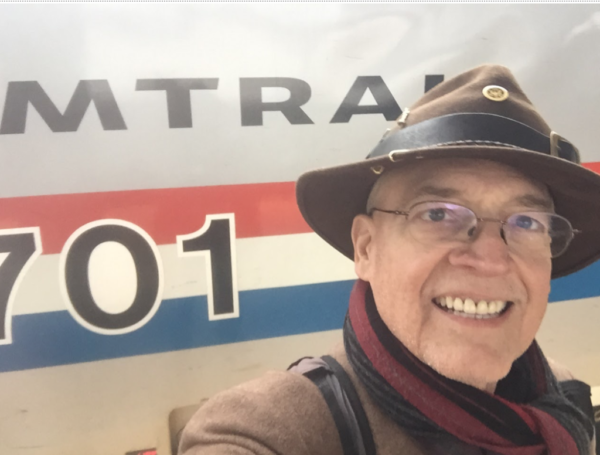 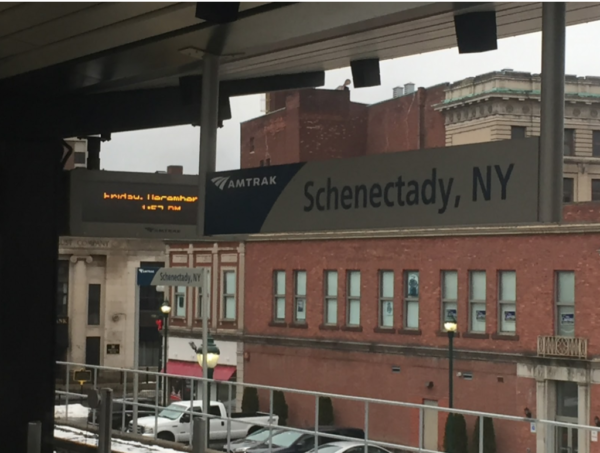 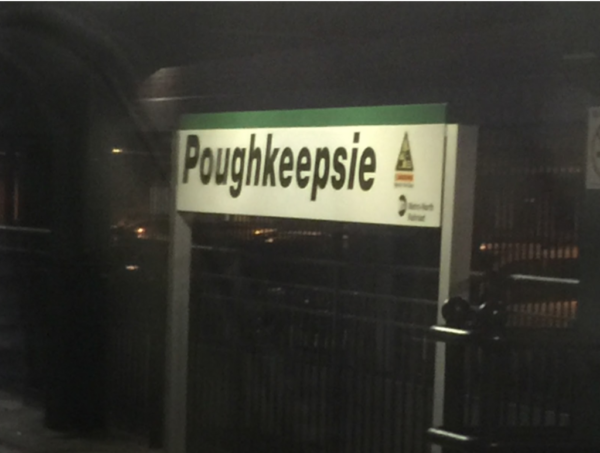 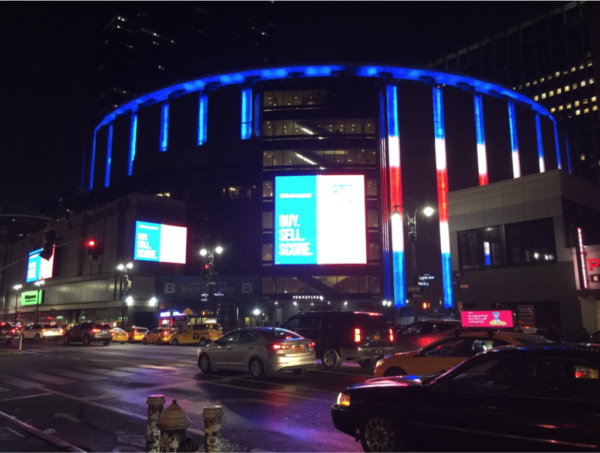 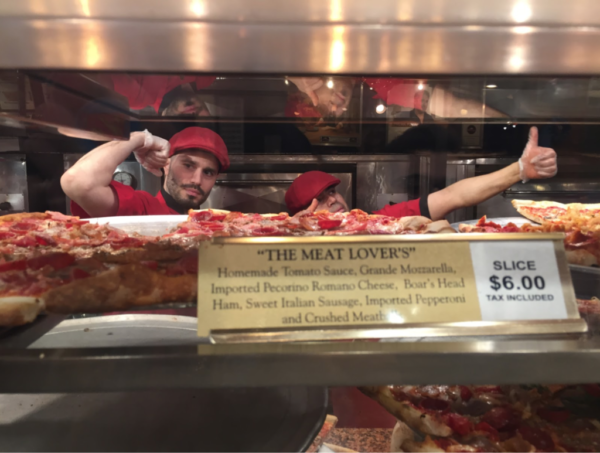 A friendly, family-run ‘Pizza By The Slice’ joint (or a Whole Pie), with plenty of Christmas music, loud conversation and neighborhood character, lovingly presided over by a larger-than-life framed photo of Chef Anthony Bordain, right across 38th Street from Penn Station.  “Fold & Eat….!” 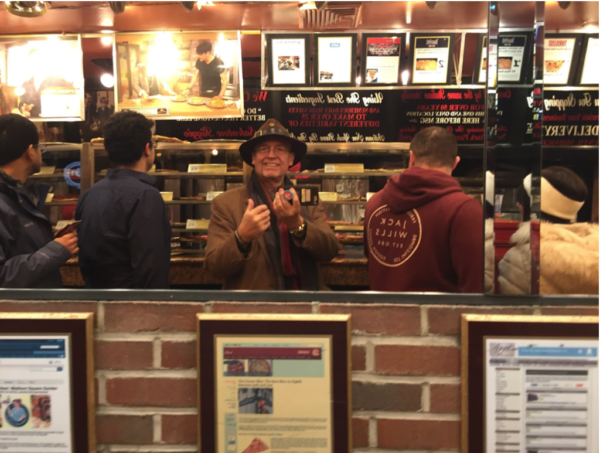 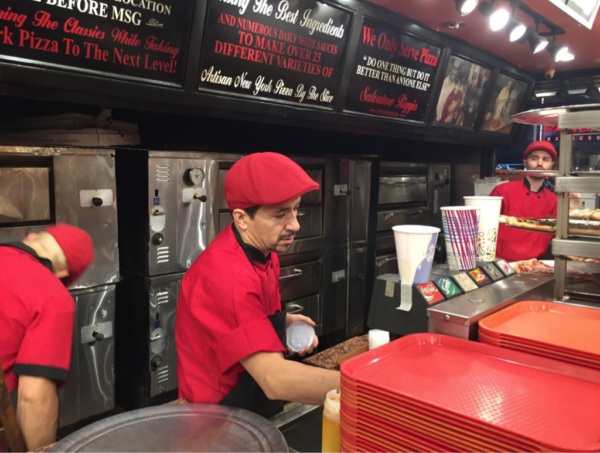 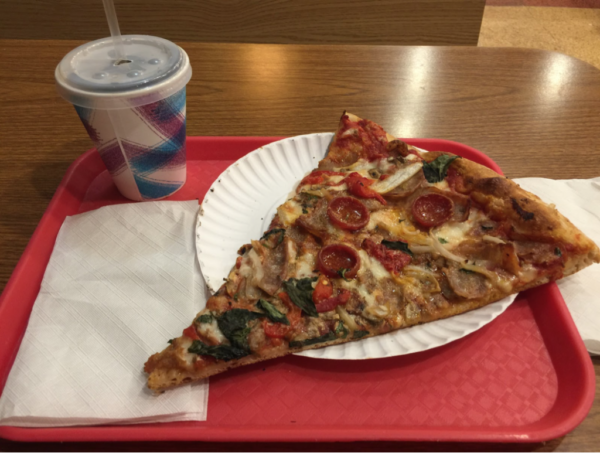 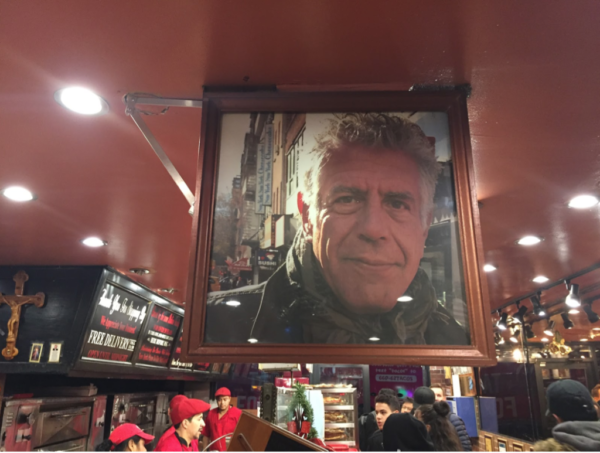 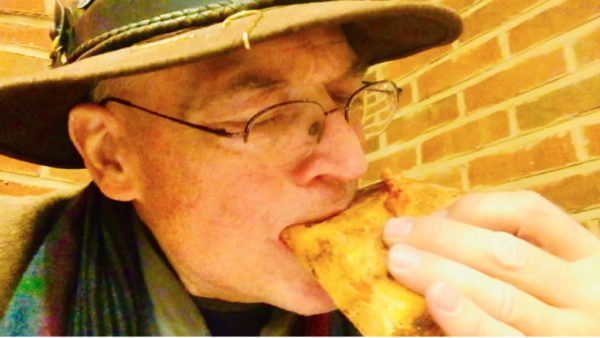 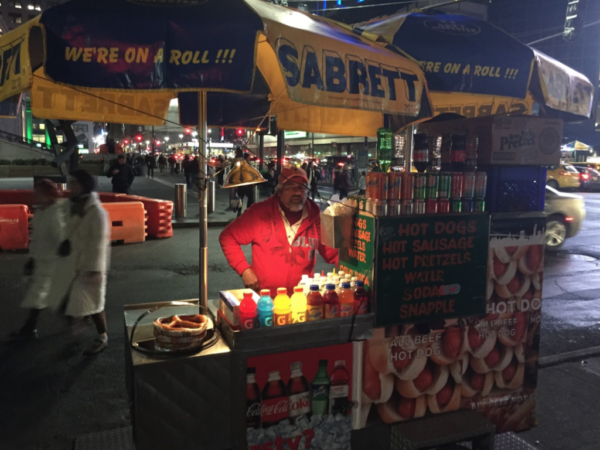 Street Food is awesome; hotdogs and soft pretzels with mustard….! 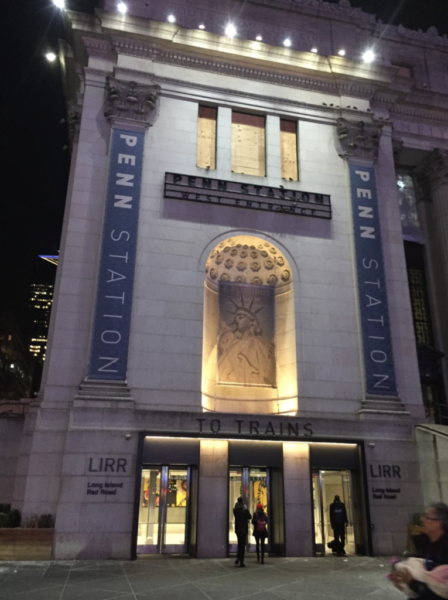 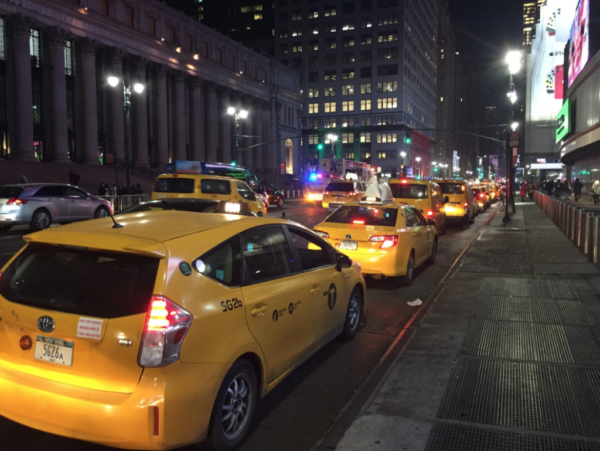 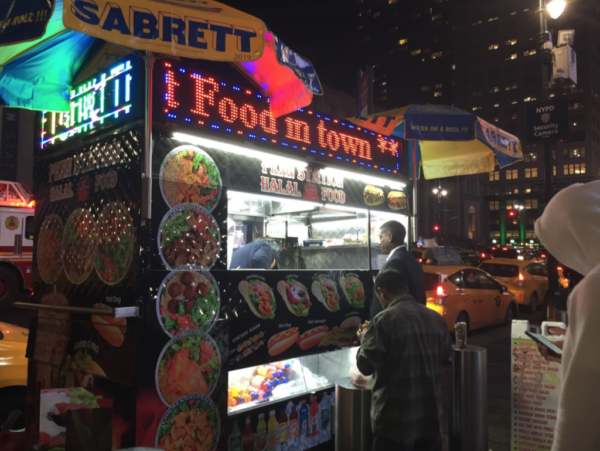 Dinner on the street; everywhere….!