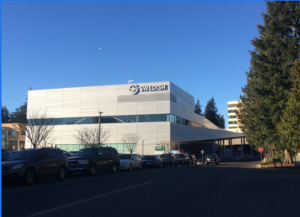 In a roundtable briefing Friday, nurses and caregivers of SEIU [Service Employees International Union] Healthcare 1199 NW at Swedish-Providence announced they were delivering a 10-day notice of intent to strike Jan. 28-30 “if proposals adequately addressing patient safety and staffing levels are not forthcoming.”

The bargaining team “has concluded that the parties are too far apart,” the union said in a statement issued Friday morning. The workers have been without a contract since July.

In the briefing, four Swedish Medical Center nurses and caregivers represented by SEIU shared their experiences of patient safety and workplace issues at Swedish. You can watch the recording of the livestream here.

The union statement announcing the strike said that caregivers believe” they have provided management every opportunity to do what’s right, but that management continues to prioritize profits over patient care. The union called for management to be held accountable “for its continued unfair labor practices such as the unlawful termination of team members for protected union activity.”

The union said it has presented management “with a robust package of proposals that lay out a roadmap for success in safe staffing, workplace safety, recruitment and retention, racial equity and inclusion for all, and providing for the needs of environmental service workers, social workers, counselors and caregivers who provide standby and call.”

You can review the union’s summary of its proposals here.

“Providence [with which Swedish is affiliated] is a $24 billion corporation that sits on an $11 billion cash reserve,” the union said. “The corporation can afford to provide good benefits and wages to the nurses and health care workers it employs and should start treating its employees fairly. When employees…are treated fairly, patient care and safety will improve.”

The strike will involve an estimated 8,000 Swedish heath care workers, with approximately 1,300 of those — both nurses and technical staff — working at Swedish Edmonds, said SEIU spokesperson Amy Clark.

According to Clark, agreements have been reached with other Providence affiliates, leaving Swedish as the one holdout.  The strike is planned run for three days, Jan. 26-30, “because our health care providers want to get back to their patients,” Clark said.

In response, Swedish expressed “disappointment” with the strike notice, and pledged to keep door open to serve patients during the strike.

“Throughout the bargaining process, we have consistently made good-faith proposals that value our caregivers, support our community and reinforce why Swedish is one of the best places to work,” said Swedish CEO Dr. Guy Hudson.

According to Swedish, the package that SEIU rejected includes:

“We place tremendous value in our caregivers, and we are proud that Swedish has offered a wages and benefits package that puts our represented caregivers at or near top of market,” said Margo Bykonen, Swedish Chief Nursing Officer.

The Swedish statement said that the union has been “unrelenting” in demanding that Swedish management transfer authority over staffing decisions to the union, which Swedish maintains “goes against state law.”

To prepare for the strike, Swedish says it has contracted with agencies to supplement their non-striking workforce with highly qualified and experienced replacement caregivers.

Swedish says it will notify patients of any service changes during the strike period.

26 Replies to ““The parties are too far apart”: Swedish heath care workers give notice of planned strike Jan 28-30”