Planning continues for the new Civic Park in downtown Edmonds, and the City of Edmonds hopes to break ground in May, the Edmonds City Council learned during a recent update on the project.

The briefing from Deputy Parks and Recreation Director Shannon Burley came during the council’s Jan. 7 business meeting. It addition to a construction timeline for the 8-acre park, located between 6th and 7th Avenues in downtown Edmonds, the update included a summary of how the city has been addressing key issues — among them the park’s high water table and citizen concerns about tall trees that might block their views.

Since the 1970s, Edmonds officials have been hoping to turn the current Civic Field property into a downtown park. After purchasing the land from the Edmonds School District in 2015, the city involved the community in developing a master plan for the park, which the city council approved in February 2017. The adopted plan includes both active and passive spaces, areas for community events and festivals, walking paths, meandering paths and connections to the downtown, a large grassy open field for sports or drop-in gathering areas, a skate park, pétanque courts, play area, tennis court and a multi-use sport court and picnic area. 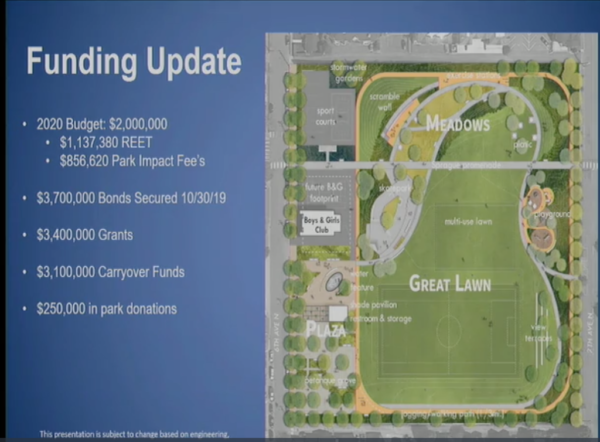 The next step was to find money to complete the estimated $12 million project. The city had already received $8.8 million from a range of sources: park capital funding from real estate excise taxes and the city’s general fund, park impact fees, and a combination of state, county and federal grant money, plus funding from the Hazel Miller Foundation. In October, the city issued $3.7 million in bonds to cover anticipated additional expenses related to stormwater treatment at the park site.

“We do believe we have raised the funds necessary to complete the park as it was designed in the master plan,” Burley told the council last week.

Because the water table on the site is very high and the park has 10,000 square feet of impervious surface, the city’s stormwater code requires on-site filtration before the water is discharged to Puget Sound. Burley said the water table issue is the “greatest challenge in designing the park.”  To address it, she said, the city’s engineering staff have been working with a civil engineering contractor to create a two-part plan.

Part one includes “raising the grade of the park on the 6th Avenue side so it will come up to a grade that is similar on 7th Avenue,” Burley explained. “It’s not as if you are taking the whole park and lifting it, but there is a greater lift on 6th and tapering it to 7th.”

Part two addresses stormwater treatment. Since a stormwater treatment facility wouldn’t fit into the existing Civic Park site, the city will instead go upstream to Yost Park, which is in same Shell Creek watershed as Civic Park. Using elements such as rain gardens, the runoff will be treated in the Yost Park parking lot. “What that will do is take some pretty dirty water up there and naturally clean it before it ever hits the creek,” Burley said. “That’s beneficial from an environmental perspective but it also allows the city to receive mitigation credits that we weren’t able to squeeze into the Civic Park footprint.”

The city must obtain a permit for its plan to treat the water, and that will be submitted to the state in February, Burley said.

The city also has applied for a conditional use permit for light poles planned for the new park, which will feature a natural grass field for youth sports. (More on that below.) The City Hearing Examiner is set to hear that request on Jan. 23, along with the city’s request for a permit to allow new fencing for the park’s tennis court. “Citizens are invited to attend that meeting and express their thoughts,” Burley said.

The goal is to issue a request for proposals for park construction at the end of February. Because the city doesn’t know whether the bids will come in at the budgeted amount, it has separated out two elements of park construction to be bid as alternatives that could be delayed until additional funding is required. These include nearly $500,00 for a water feature at the park entrance and $268,000 for a rubber walking track surface over the currently planned asphalt.

The city hopes to break ground in May with construction estimated to take a year. The plan is to use sod rather than grass seed, so the city won’t have to fence off the park while waiting for the grass to grow, Burley said.

During her presentation, Burley also provided updates on the following elements of the park:

– Although there has been significant community conversation about it, there will be no additional parking added to Civic Park. Burley did note that there’s a fire lane on 6th Avenue, formerly used by Fire Station 17 for fire truck maneuvering but no longer needed, and it will be restriped to add several additional parking spaces directly in front of the park. She also pointed out that because much of the park is designed for “passive” uses rather than organized activities, park usage is likely to be spread throughout the day rather than routinely drawing many people “all at once.”

– The lease for the Edmonds Boys and Girls Club, which currently occupies a building on the site, expires in December 2020. The club isn’t sure whether it wants to stay in the current location, and is also considering a move into space at the nearby Edmonds Center for the Arts building, The Boys and Girls Club is required to give notice by May as to its intentions, and if it decides to remain at Civic Park, the city would build a new 20,000-square-foot, two-story building to accommodate them. If the Boys and Girls Club decides to leave, Burley said she would recommend that the city reopen the park master plan “to determine what goes into that spot.”

– The city is required to spend 1% for public art in the park, and the council will be asked to approve a call for public artists. While the city has identified possible locations for artwork, the final placing will depend on the proposals received.

– The Hazel Miller Meadows element of the park will include a sloped lawn, picnic tables and shade. This area will feature a mix of flowers that attract pollinators. “We see this a an educational space for people to learn about pollinators,” Burley said, adding it will be “a nice retreat/respite-type place.”

– The park will include a new one-third-mile track and there will also be exercise stations throughout the park, including a “scramble wall”  — a climbing wall that has handholds with a poured-in-place safety wall. 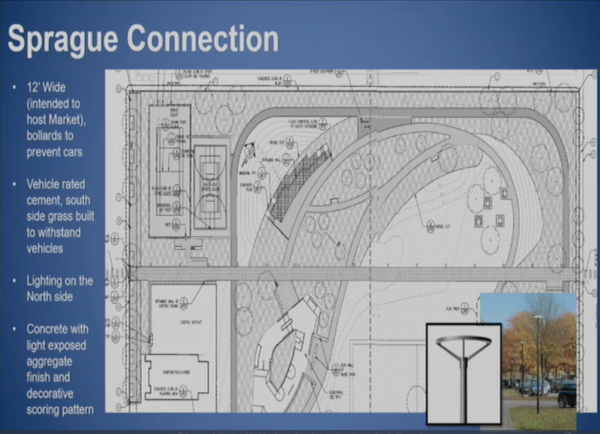 – The park will include the “Sprague Connection,” a 12-foot-wide, vehicle-rated path with bollards that will cut across the entire park. Having such a path will allow easy entrance and exit for vehicles used to set up for future festivals. It’s also possible that the Edmonds Garden and Summer Farmer’s Markets sponsored by the Historical Museum could be relocated to the park site, and the roadway would assist market vendors who need to set up there, she added. Related to the plan for festivals and other events on the site, the park design includes power “adequate to run large events,” she said, including the annual Taste Edmonds. 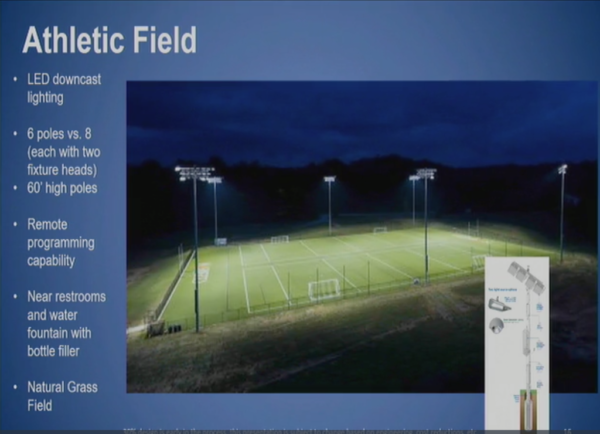 – While the park’s athletic field will be lit, Burley assured the council that the technology has “improved significantly” to minimize light spillage into nearby residences. Plans call for replacing the current eight poles with six poles that use LED lighting. That said, Burley noted that park hours are dawn to dusk so the lights would only be used when the field is rented. The grass field is designed for youth sports — “up to about U14 for soccer,” Burley said, with four or five games running side by side. 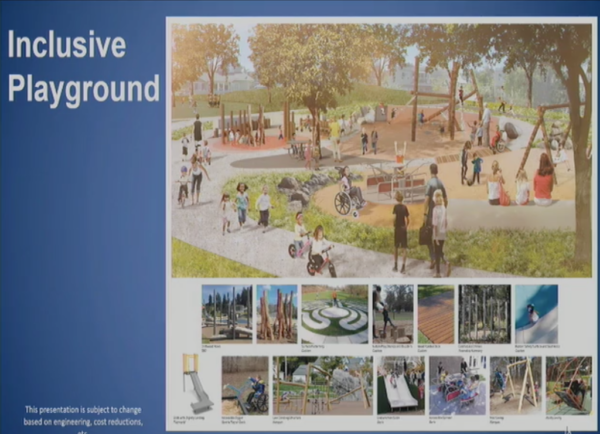 – A fully inclusive playground is “one of the marquee features of the park,” Burley said. She explained that while Seaview Park was the city’s first inclusive park, Seaview is located at the top of a hill, so it was impossible to ensure it was completely ADA accessible. That’s not the case at Civic Park, which is on level ground, she added. The Edmonds Rotary Foundation is working with the city to raise $400,000 to buy specialized playground equipment, which would “allow for children to stay in their wheelchair and still interact and participate in play.” As an example, she pointed to a drawing of a flush-with-the-ground spinning device where a child in a wheelchair could roll right on and participate with other children. 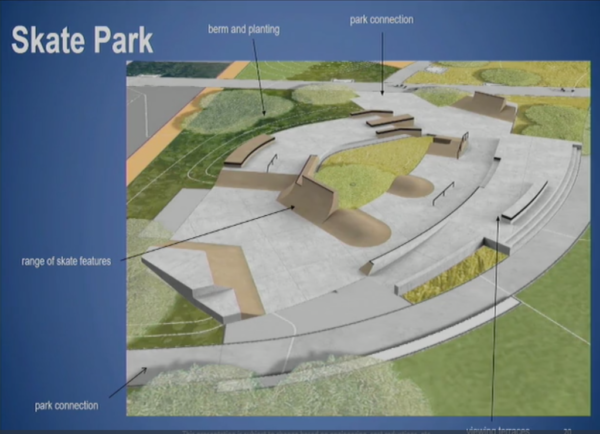 – The park design also includes a new skate park, which will be “far improved” from the current one, Burley said, adding it will include a significant number of new features for both skateboards and scooters, “suitable for beginners to advanced and everything in between.”

– Based on requests from the city’s Pétanque Club, the park includes a “pétanque grove” — a multi-purpose space that is a garden with multiple benches and plantings. The area is “untended as an almost zen area in the park with space for peace and quiet,” Burley said, in addition to offering a spot for watching people play the game. The trees have been strategically placed so that the existing six pétanque courts can be converted into 16 courts for tournaments, which serve as fundraisers for the Edmonds Food Bank.

– Based on concerns from Bowl residents about the height of Civic Park trees that could block their views, the park’s planting plan has been revised from the original, with a reduction in the number of larger trees. “There are a still a great number of beautiful trees,” Burley said. “We don’t believe that we have in any way hurt the park atmosphere but we have significantly reduced the amount and the species of trees that could block views in that 7th avenue view corridor.” The city plans to plant magnolia trees all along the 6th Avenue side of the park, and the plan is to incorporate power for holiday lighting on the trees, she said.

– Because the park will not be fenced and safety issues related to pedestrian traffic are a concern, the park includes plantings of “unfriendly plants” along the buffers next to residences — including those with thorny spikes that will prevent people from chasing balls or walking through them into alleyways. Overall, a total of 70,000 shrubs or smaller plantings will be included in the new park, Burley said.

One Reply to “With water-related issues addressed, Edmonds’ Civic Park closer to construction”