More than 75 citizens turned out Wednesday evening in the Edmonds-Woodway High School Great Hall for the first open house of the new Edmonds Citizens’ Housing Commission.

Formed  last year following months of contentious debate stemming from the now-defunct Edmonds Draft Housing Strategy, the commission’s aim was to take a step back and revisit the issue from a broader perspective with enhanced Edmonds City Council involvement.

The commission is comprised of 15 members and eight alternates. Each councilmember appointed two commissioners and one alternate; the mayor appointed one of each. They began meeting in September 2019 to discuss foundations, ground rules, schedule and scope, and are now embarking on the early stages of drafting initial policy recommendations to the council (see accompanying timeline). 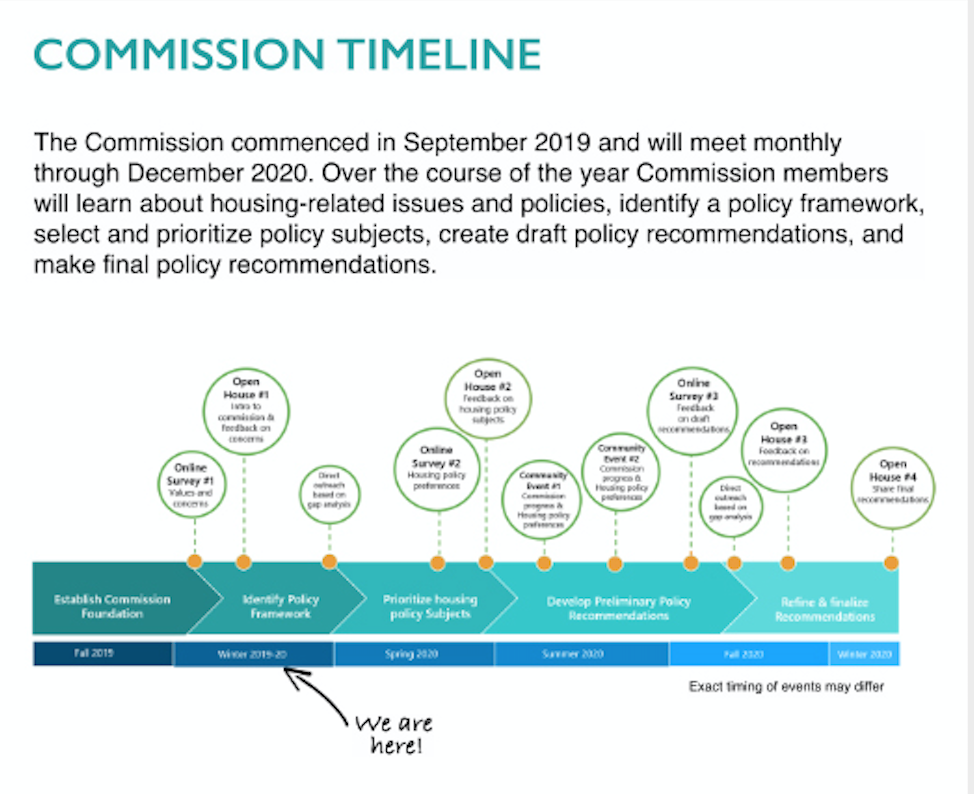 Informing this process are data and input obtained from the public via the commission’s online survey, the online comment form and information obtained from this and future open house meetings. Citizens are also encouraged to contact city councilmembers, commissioners and commission staff directly (email links here.

“We appreciate you all coming out for our first of many open house activities,” Nelson said. “Thanks for engaging in the process.”

Next to the podium was Kate Graham, who laid out the agenda for the evening. Graham is an outreach specialist working with the commission to engage the community and elicit the critical input that will inform and guide the commission’s work. She described how attendees would be broken up into three groups that would rotate between three information stations. This would bring them up to speed on baseline data and other information relating to the current housing situation in Edmonds.

The information stations focused on the following broad topics:

“Tonight we’re inviting you to learn about what the commissioners have been learning as they become oriented to the current situation in preparation for embarking on developing a policy framework,” Graham explained. “No policy has been drafted yet, so this is really to start guiding the policies they will be recommending to council in these areas. Your feedback is critical to ensure that this process gets off on the right foot.”

The individual commissioners then took to the podium to introduce themselves and give brief statements about their priorities and what they hope to bring to the effort. After that, the attendees broke up into three groups. Each group had 15 minutes at each of the three stations, beginning with a five-minute high-level overview provided by a staff member, followed by 15 minutes of group conversation, during which participants shared concerns and ideas related to the topics under discussion. Each group had a notetaker who kept track of the points raised on flip charts, which would be passed to commission to inform its deliberations.

Some of the most heated conversation arose in group one. Moderated by City of Edmonds Associate Planner Mike Clugston and recorded by Commissioner Tanya Kataria, the subjects of zoning and housing types prompted many of the same questions and concerns that bedeviled the earlier housing strategy efforts.

After Clugston referenced predictions that Edmonds will add between 5,000-6,000 new residents between now and 2035, several audience members responded asking why.

“Why do we need to add these additional residents,” asked one. “Why do we even want to bring more people in?”

“I worked hard to be able to live in Edmonds,” responded another. “Why should I be subsidizing others who want it handed to them? Our community doesn’t want to change from single-family.”

“It comes down to zoning,” suggested a third. “We can decide where, how or if to add growth and who gets let in and where.”

“This is just what we’re hoping to hear tonight,” chimed in Edmonds Planning and Development Director Shane Hope, who circulated between the groups. “This open house is for generating ideas to take back to the commission, which will flesh them out and transmit them to council. All the commission does is make recommendations to council. Council can listen, modify or just throw it all out.”

“Edmonds has a total population of about 42,000 who live in 17,515 separate households,” Shipley explained. “Of these, 29% are renters and 71% homeowners. An overwhelming 63% are in single-family homes, 30% in small multifamily buildings (three to four units), and the remainder in large multifamily and duplexes.”

Participant questions included how couch surfers, folks in retirement homes and people living in cars figure into this, the potential role of multi-generational housing, and fears that low-income housing could raise taxes for homeowners in the community.  Others raised affordability issues.

“We live where it’s affordable for us,” pointed out one citizen. “We shouldn’t need to accommodate those who can’t. It’s not a hardship to simply live where you can afford to live. Everyone doesn’t need to be able to live everywhere.”

Citizen questions here were mostly directed at understanding the various programs and how they work, including whether other citizens end up subsidizing the tax breaks developers get under the multi-family tax exemption program and whether programs exist to incentivize preservation of existing housing stock.

At the end of the break-out sessions, attendees returned to the main seating area to hear concluding remarks from Kate Graham.

“Once again, thank you all for coming and providing your input, suggestions and comments,” she began. “All of the feedback from tonight will go right to the commissioners and will become part of their deliberations and decision-making.

“You’ll never learn everything about housing and never get to share all your ideas in a 15-minute group session, and the commission welcomes your additional feedback as it goes along,” she continued. “Please submit any and all ideas on the commission website input page, or directly to the commissioners and councilmembers. We will be informing you about future open houses, and we’ll be making extra efforts to get this information out early and spread it widely. Commission meetings are open to the public, but are also live-streamed and recorded so you can always see them. And again, thank you for being here tonight and being part of this important process.”