Since approving a plan in 2017 to revitalize the 2.3-mile portion of Highway 99 that runs through Edmonds, city councilmembers and staff have been faced with a brutal reality: Funding for the entire project — especially in an era of shrinking federal grant dollars — would be hard to come by. But on Tuesday night, the council agreed to a revised plan, promoted by new Mayor Mike Nelson, that focuses on one project element: installing landscaped medians along the entire centerline to improve both safety and aesthetics.

The Edmonds section of the highway runs from 244th Street Southwest to 212th Street Southwest, and also includes portions owned by Snohomish County (unincorporated Esperance), and the cities of Mountlake Terrace and Lynnwood.

City Public Works Director Phil Williams explained that the original Highway 99 project scope was estimated to cost nearly $184 million in 2020 dollars — and as such the city had proposed completing it in seven segments, over several years. But the new scope — which the council on Tuesday night approved unanimously — will cost $6.5 million and could be completed in the next two years.

The next step, though, is for the city to obtain approval of the scope change in the state Legislature and from the Washington State Department of Transportation (WSDOT). Edmonds had already received a $10 million allocation from the legislature for the original project scope — to be provided during the 2021-23 biennium — although in 2017 the city got a $1 million advance on that money, which was used to begin design work.

The revised scope needs to be sent into the state “very quickly” so it can be reviewed by the state transportation committees in the House and the Senate during a short legislative session and then considered by WSDOT, Williams explained. “So there’s some sense of urgent timing on this,” he said.

The city used approximately $400,000 of the $1 million in advanced funds to complete initial Highway 99 planning and design work with assistance from consultant SCJ Alliance. The result was a seven-segment plan for project improvements that included features such as new sidewalks and street lighting, center landscaped medians, and undergrounding of overhead utilities — the last element alone was estimated to cost $54.5 million).

In contrast, the revised scope would focus on one element common to all seven of the segmented projects: installing landscaped medians along the entire 2.3-mile length of the Edmonds Highway 99 centerline. Assuming approval from the state, the $6.5 million cost would easily be covered by the $9.6 million in remaining funds, and there would also be money left over for another city priority: installing an additional traffic signal in the area between 228th and 238th Streets Southwest, where there are no places for pedestrians to cross.

A HAWK (High Intensity Activated Crosswalk) signal, activated by pedestrians when needed, is estimated to cost between $1 million and $2 million and is likely to get the most support from the State Department of Transportation, Williams said.

As proposed, the raised and landscaped medians would include left-turn openings in selected locations along the highway, to be determined during design. U-turns would also be allowed at the intersections so that drivers could access businesses on the other side of the street, Williams said. 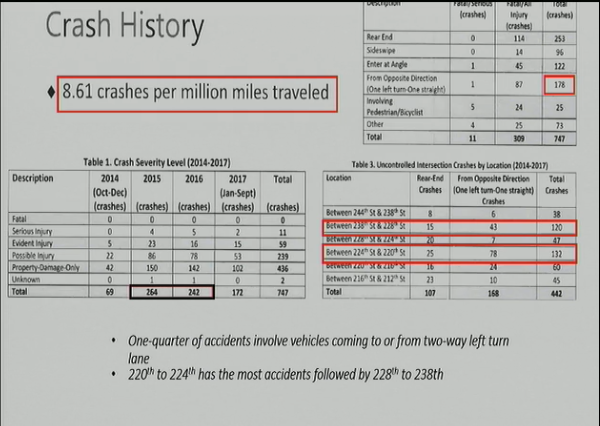 Crash history data indicates that that the Edmonds stretch of Highway 99 has 8.61 automobile accidents (which includes crashes involving either only vehicles or vehicles and pedestrians) for every million vehicle miles traveled — and that is three-and-a-half times the state average. One quarter of the accidents involve vehicles coming into or out of the left-turn lanes, Williams said.

Once the medians are installed, the city will look for additional funding for a future buildout that would add other improvements, including highway widening, more sidewalks, better lighting, banners, street furniture and possibly some public spaces. There would also be signalization coordination along the Highway 99 corridor to ensure a smoother traffic flow, he said.

One possibility for those future funds: The city is asking the state Legislature “to reprogram” the $6.2 million that the state had allocated for the now-dead Waterfront Connector project. Since the Connector — aimed at providing waterfront access during a train blockage — was a safety project, “our hope is to be able to convince them (the state) to give us all or a portion of those funds to go to our next biggest safety issue in Edmonds, which is Highway 99,” he said.

“We’ll see how that goes,” Williams added. “Initial signs aren’t necessarily promising but we’ll certainly take a run at it.”

The city also plans to apply for other grants to fund Highway 99, including the federal Highway Safety Improvement Program.

Assuming that WSDOT approves the scope change, the timeline calls for the Highway 99 project design to be completed in 2020 and construction to occur in 2021.

Council President Adrienne Fraley-Monillas, who lives near Highway 99 and has long been a proponent of safety improvements there, said she hoped that staff would prioritize adding a HAWK signal to ensure pedestrian safety along the 10-block stretch between Country Farms produce market at 228th and Safeway at 238th.

“That’s a long way to go for somebody to cross the road,” she said. “And there’s bus stops in between there. So when they (pedestrians) get off the bus they’re coming across seven lanes of traffic.” It’s especially important to prioritize a new signal in that area given a new apartment complex proposed at 234th Street Southwest, she said.

Overall, Fraley-Monillas said, the plan is “a great first step to moving forward in making everybody safe who lives up along there.”

Williams said the city also intends to do some type of “gateway” improvements that signal that drivers are entering or exiting Edmonds. On that topic, Councilmember Vivian Olson said she hoped the city would be involving the public in that effort, noting that “we have a history in Edmonds of really liking to be involved in planning and having input to our signs.”

The city is also talking with WSDOT about the possibility of reducing the 45 mph speed limit along the Edmonds stretch of Highway 99, similar to what was done in Shoreline following their roadway improvements, Williams said.

Calling it an “an excellent plan,” Councilmember Laura Johnson asked Williams how Edmonds will address the fact that about 20% of the Highway 99 frontage is owned by the jurisdictions of Lynnwood, Mountlake Terrace and Snohomish County.

“We’ve had conversations with other cities and the county,” Williams said. “We would be the sponsor of the project and our cost estimates include all the frontage. Assuming that we find funding, I’m doubtful they’d (the other entities would) object to it.”

Councilmember Susan Paine said she hopes there will be a “robust” communications and engagement plan to inform Highway 99-area businesses and residents about the revised scope. Williams agreed that such an effort was important, adding “it will be a big task.”

Councilmember Luke Distelhorst asked Williams whether the revised project would limit any future Highway 99 work and cause any reworking of the currently planned improvements. “I don’t see any reason why we can’t do the vast majority of this median and not…lose an opportunity to do something else we want to do (later),” Williams replied.

In other business, the council addressed three items for study, with no action scheduled:

-The first involved a proposed code amendment to the city’s unit lot subdivision application procedure. The council will hold a public hearing on the matter will occur in the next few weeks.

-The second centered on a draft ordinance — recommended by the Edmonds Planning Board — that would amend the Edmonds Community Development Code to add “Hotel” as a permitted use in the city’s commercial waterfront zone. City staff presenting the item said that under the proposal there is no project currently proposed, and that there would be no change to existing height or parking requirements under the amendment. This matter will also come before council during a public hearing at a later date.

-The third item was a draft resolution regarding “Council Rules of Procedure.” This encompass detailed information about items such as council organization, duties of officers, filling a council vacancy, agenda preparation, appointment of councilmembers, council meetings, the consent agenda, public testimony, general conduct and decorum, and council representation. This site will be discussed by the council at a future meeting.

And speaking of council procedures, councilmembers will hold a daylong retreat in the third-floor Brackett Room of City Hall, starting at 9 a.m. this Friday, Feb. 7. You can see the complete agenda for the retreat here.