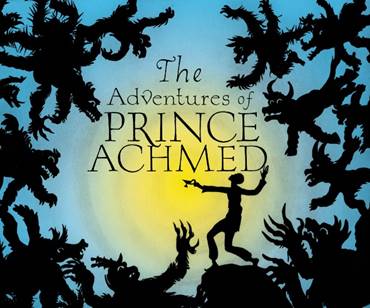 The Edmonds Center for the Arts (ECA) on Saturday, March 14 will screen The Adventures of Prince Achmed (1926), a silent film with live score performed by Miles & Karina.

Created by 23-year-old teacher Lotte Reiniger, a German film director and the foremost pioneer of silhouette animation, the film is the oldest existing animated feature, and showcases the animation techniques Reiniger perfected.

The Adventures of Prince Achmed is presented as part of ECA’s all-ages Saturday Matinee series. Taken from The Arabian Nights, the film tells the story of a wicked sorcerer who tricks Prince Achmed into mounting a magical flying horse and sends the rider off on a flight to his death. But the prince foils the magician’s plan, and soars headlong into a series of wondrous adventures.

Northwest Film Forum commissioned Miles & Karina to create a score for The Adventures of Prince Achmed, which premiered at Children’s Film Festival Seattle over 10 years ago. The duo performs with accordion, guitar, banjo, viola, glockenspiel and percussion, and has since traveled the world with the program.

“This film is a must-see masterpiece,” says Elizabeth Shepherd, Youth Programs Director at Northwest Film Forum. “What better way to enjoy the dream-like beauty of it than to see it on the big screen, accompanied by a world-class score played live by Miles and Karina. Their score and performance are by turns playful, mysterious and majestic, and truly transform this film experience into a magic carpet ride audiences will never forget!”

Miles and Karina are David Miles Keenan and Nova Karina Devonie. The duo is influenced by recordings from the 1940s, ‘50s and ’60s, and covers virtually all American styles, with Karina on accordion, ukulele and glockenspiel, and Miles playing guitar, banjo, fiddle and percussion. “Delightfully quirkish,” sometimes disturbing, often beautiful and always entertaining – everybody loves Miles & Karina.

Tickets to ECA Saturday Matinee: The Adventures of Prince Achmed are $10, with $2 Arts for Everyone tickets available to children, families and older adults identifying as low-income. Please call the ECA Box Office at 425-275-9595, go online at www.ec4arts.org, or visit the box office at 410 4th Ave. N.

ECA partners with TeenTix, and offers $5 tickets to teens at the Box Office on the day of the performance, pending availability. To become a TeenTix member, register at www.teentix.org.