There’s exciting news emerging about the space formerly occupied by Fabric of Life in downtown Edmonds on Main Street near 5th Avenue.

For months, gossip has been flying around as to what might inhabit the space. Developer Mike McMurray even solicited the public for suggestions about the space. Who knows how these things get started, but I’ve heard an assortment of possibilities. The rumors that intrigued me most were the whispers that Great Harvest Bread or Mamma Melina’s might land there. As attractive as those possibilities might have seemed, something entirely different and equally intriguing is about to unfold.

As it turns out, a partnership of three entrepreneurs  —  Jamie Butler, Andy Walls and Travis Eaton–  who collectively own and operate the popular taproom/restaurants The Dray, 708 N.W. 65th, The Yard Cafe, 8313 Greenwood Ave. N. and Trailbend Taproom, 1118 N.W. 50th in Seattle, will expand into Edmonds. They’ve got big plans for the space.

Their fourth restaurant — Leftcraft — will feature upscale, locally sourced and healthy cuisine, backed up with a full bar of spirits and a generous array of carefully selected craft beers pouring from 28 rotating tap handles.

Barring any unforeseen delays, look for them to open their doors in April. Expect an entirely new menu; although there’s a little overlap, each of their restaurants possesses a menu unique to it.

“My philosophy is that I cook what I like to eat,” owner Andy Walls said. “This menu will include at least four grain bowl options, six to eight salad choices and an equal number of sandwiches. Our rotisserie will focus on ribs and chicken, but we’ll probably do some other things with it as well. All our breads and flatbreads will be produced in house.”

Appetizers, desserts and a kid’s section will also grace the menu. 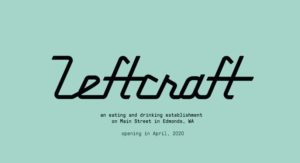 I was curious about the genesis of the name. “As we were going back and forth, throwing out ideas – we’re on the “left coast“ and the fact that we have this rich culture of craft beer and food…  we just combined the two ideas and came up with Leftcraft,” Walls said.

It has a nice ring to it.

Owner Jamie Butler has a local connection. In a way, this is a bit of a homecoming for him. He grew up in Edmonds, attending Woodway High and then Edmonds-Woodway High back when the big high school transition was underway.

Salish Sea Brewing’s owner Jeff Barnett, who has known Butler for years, mentioned to him that a space was available up here and put him in touch with the property’s developer, Mike McMurray, who also happened to be one of Butler’s former classmates.

“It’s kind of funny the way that all worked out. I hadn’t seen Mike since high school,” said Butler.

A peek inside the space (when the butcher paper on the window slid a little) reveals an absolutely beautiful  interior. Graham Baba Architects, who have a huge portfolio of this sleek, clean look, is the firm responsible for the design. Industrial, loaded with rich wood grains, concrete and steel, it has a comfortable, cool vibe not unlike The 104 in Lake Forest Park, or the owners’ Trailbend Taphouse in industrial Ballard. I’m told the bar top will be an especially cool combination of concrete and joined wood.

Although the menu will be different and they expect their Edmonds location to be a little more upscale, I thought I’d get a sense of the place by dropping into TrailBend.

Also beautifully appointed (and also designed by Graham Baba), TrailBend has a fantastic assortment of craft beers, ciders, root beer, ginger beer and kombucha. We tried their pesto chicken salad sandwich with a barley quinoa salad, some mac and cheese, a side of “butternut bake” and a “balsamic blue” salad.

Although the mac and cheese and balsamic blue salad were very good, I really enjoyed the pesto chicken sandwich –  a generous portion of creamy pesto and chopped chicken served with pecorino, roasted tomato and spinach served in pita bread, and I absolutely loved the baked butternut spread. Served with flat bread, it combined butternut squash with ricotta, feta, dried cranberries and caramelized onions – it had a great sweet and savory combination that really pleased our palettes. It was the first thing to disappear at our table. The hazy Wander Citra IPA brewed in Bellingham was a nice compliment, and the Izzy Kombucha was one of the best I’ve had, possessing an interesting nutmeg note.

We’ll keep you posted with more news about their opening.