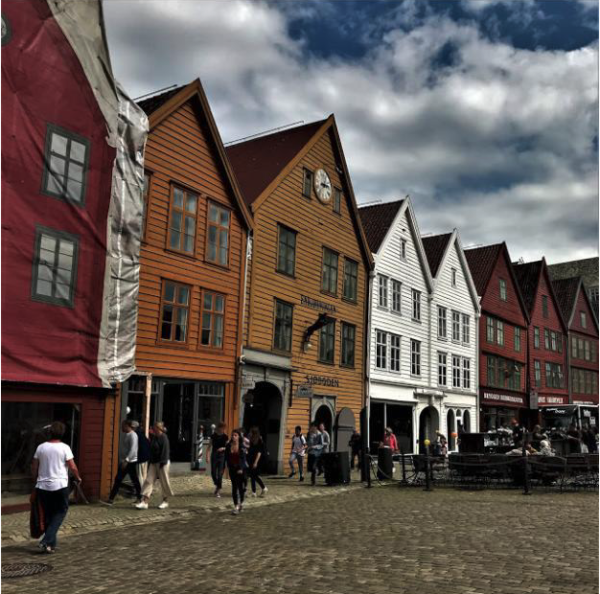 Bergen, Norway, has a reputation for rain. Lots of rain: 83 inches over 230 days each year. But the weather gods smiled when we were there. Located on the southerly portion of Norway’s fiord-fringed coast, the city originally gained prominence as part of the Hanseatic League, a commercial and defensive confederation of merchant guilds and market towns from the late 1100s until the mid-1600s. Now it’s a busy and beautiful university city. 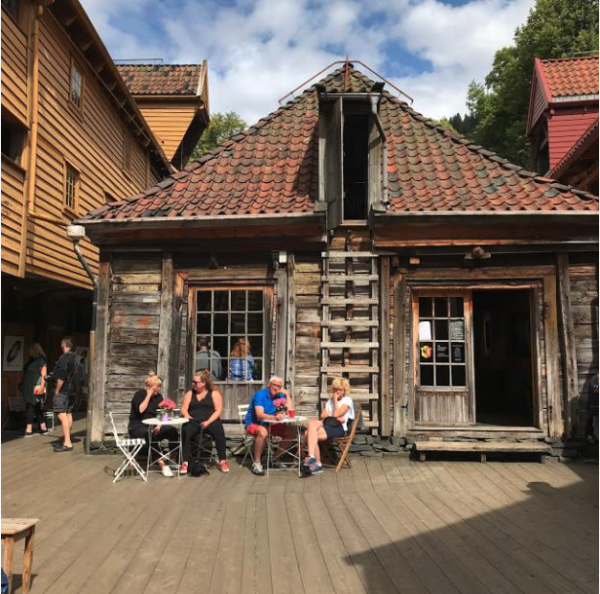 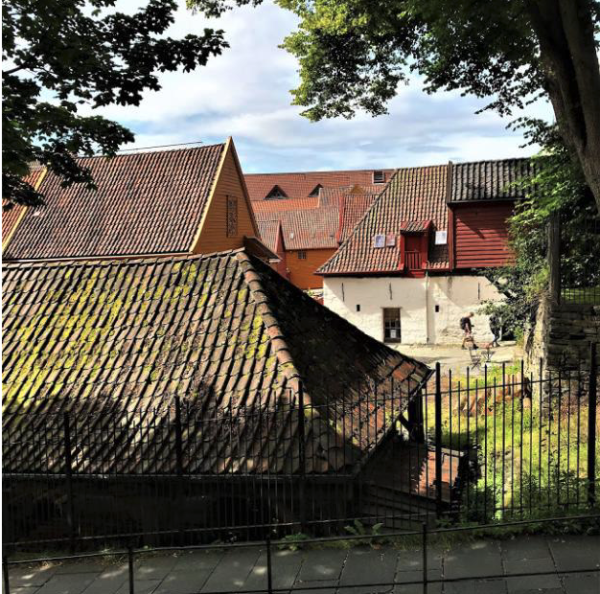 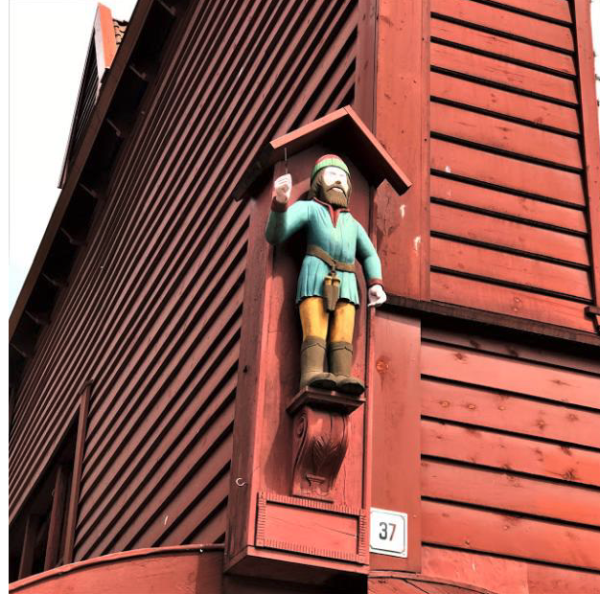 The old traders’ warehouses divided by narrow alleys line the waterfront. Instead of dried cod, they are now designated UNESCO heritage sites and are a magnet for tourists looking for trinkets like trolls, silver jewelry, weirdly-named snacks, and high-end clothing like the sweet children’s styles in a shop window, and the divinely-inspired but devilishly-expensive Oleana sweaters I craved. (There was no doubt I’d succumb to their allure. My indulgent husband sighed but gamely produced his credit card.) 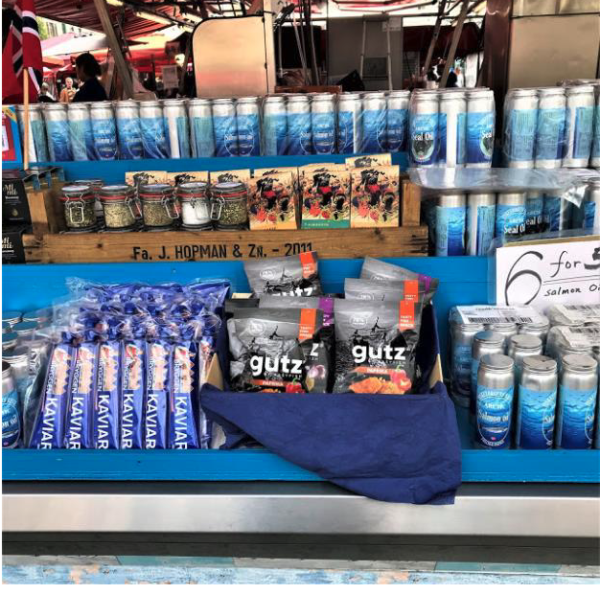 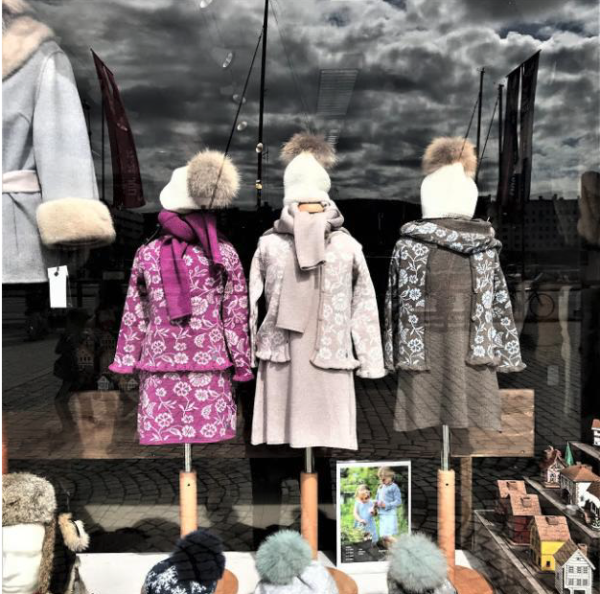 But Bergen is also home to two outstanding cultural treasures, the real object of our visit: The composer Edvard Greig’s lovely summer home, and an ancient stave church. 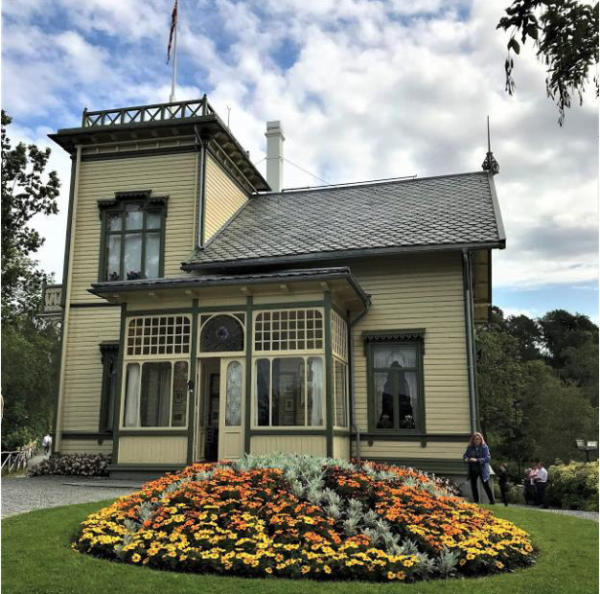 The composer is one of my favorites for his Peer Gynt Suite and the lovely Wedding Day at Troldhaugen expressing Norwegian nationalism among many other pieces. His home at Troldhaugen was built in 1885 near the shore of Nordås Lake, a suburb of Bergen. He and his wife lived in this idyllic location for 22 summers until he died in 1907, some say of overwork. Troldhaugen became a museum in 1928 and the complex set in lovely gardens now includes Grieg’s villa, the composer’s hut by the lakeshore, the couple’s gravesite as well as a café, modern museum building and Troldsalen, a chamber music hall seating 200 people. 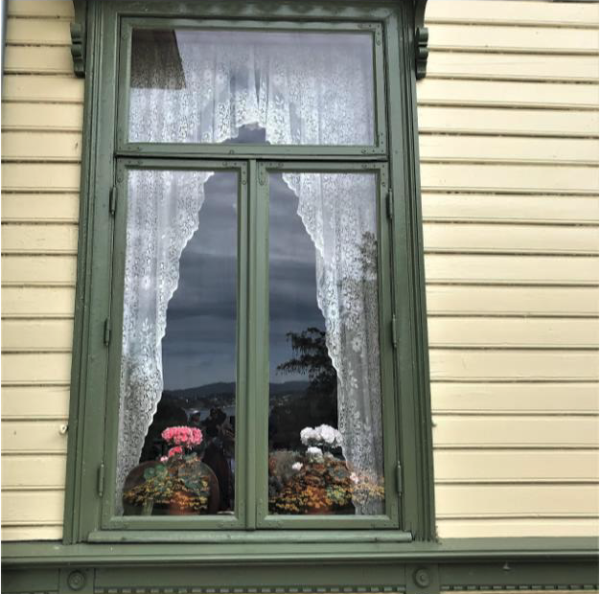 The house, called The Villa, is surprisingly small for an owner of such international fame. The exterior has the typical Victorian gingerbread elements, and like so many pictures I’ve seen of Scandinavian homes, this one had the typical geranium blooming in a window.

Like all tourist areas now, it was crowded and we had to wait our turn to enter the home.

One whole room is now devoted to a display of Greig’s manuscripts and collection of awards. 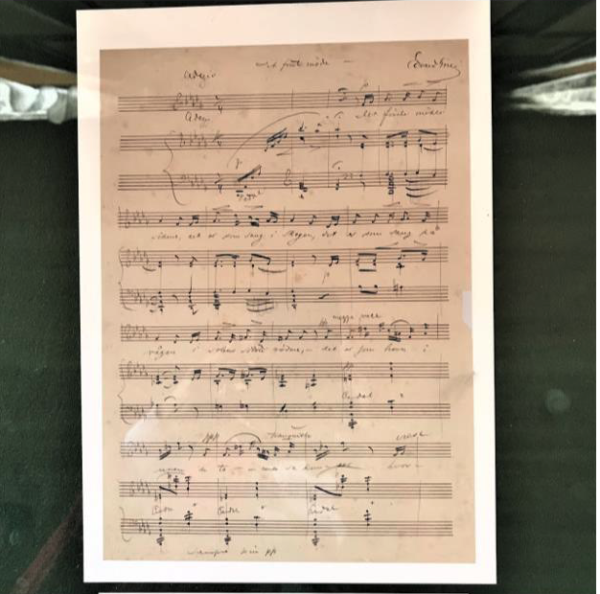 It was easy to imagine musical afternoons in the living room with the kettle steaming and friends like the famous virtuoso violinist Ole Bull gathered to hear his latest composition. 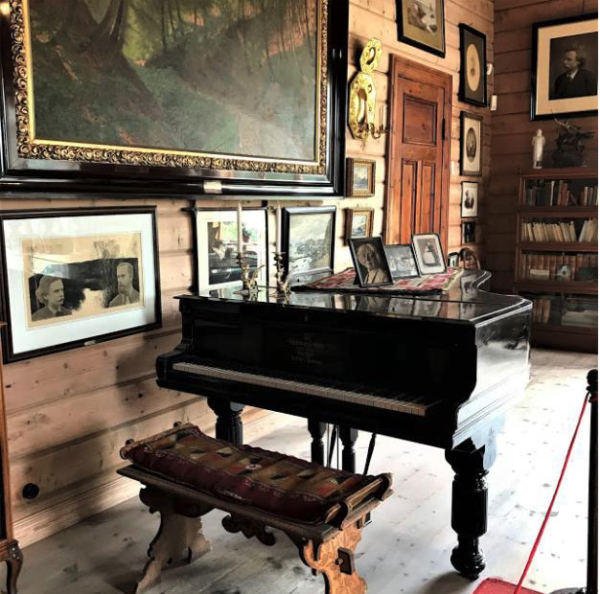 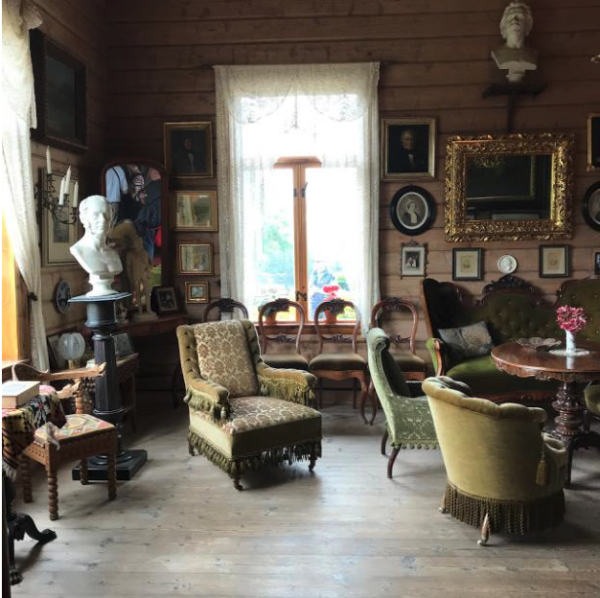 After the tour, we wandered down the steep hill to peer in the windows of the tiny cabin where Grieg worked accompanied only by birdsong and lapping lake waters. The building contains a piano, stove, desk, and couch—all he needed. I pictured him taking a break on the sofa awaiting inspiration for the next movement of his latest composition. 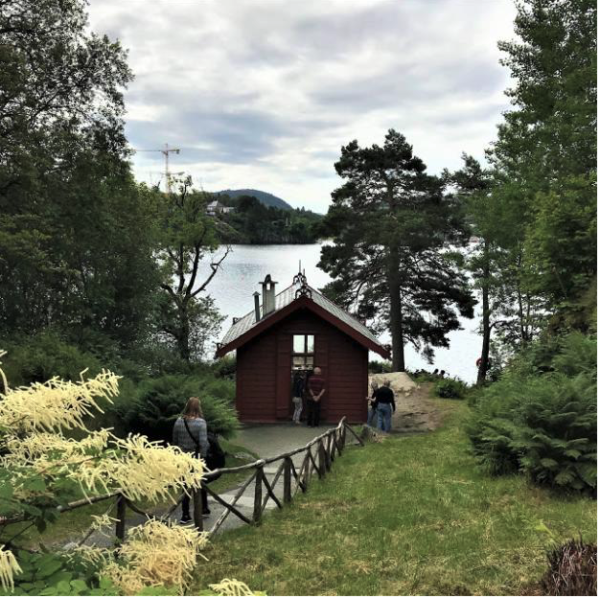 On the way out of the complex, we joined others to dispose of the ubiquitous stickers stuck to their clothes to remind them what group they had been in (and probably annoying the maintenance workers). 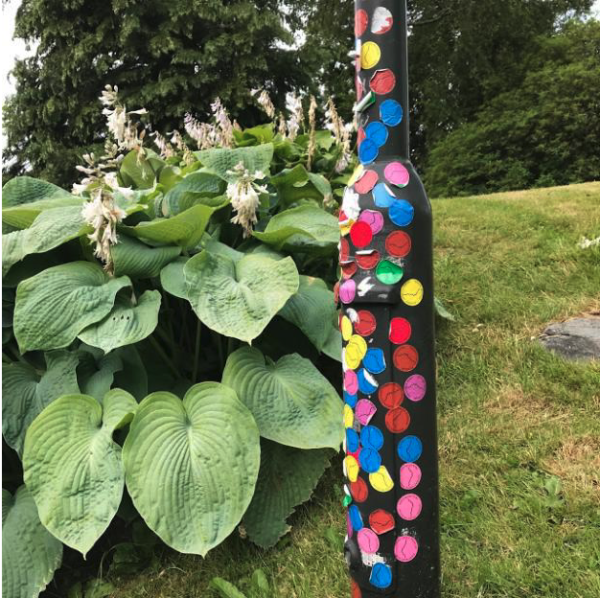 Our heads and hearts filled with music as we moved backward in time to visit the reconstructed Fantoft Stave Church originally built when Norway was discarding the Norse gods in favor of Christianity. A stave church is a medieval wooden structure, once common in north-western Europe. The name derives from the building’s structure of post and lintel construction, a type of timber framing where the load-bearing pine posts are called stav in modern Norwegian. There were once around two thousand such churches, but now only a few remain, some much larger than the one we visited which must have served a small congregation. The church was originally built around the year 1150 in a village near the end of a fjord north of Bergan. When a new church was built in 1879, the wooden building was moved to its current location. 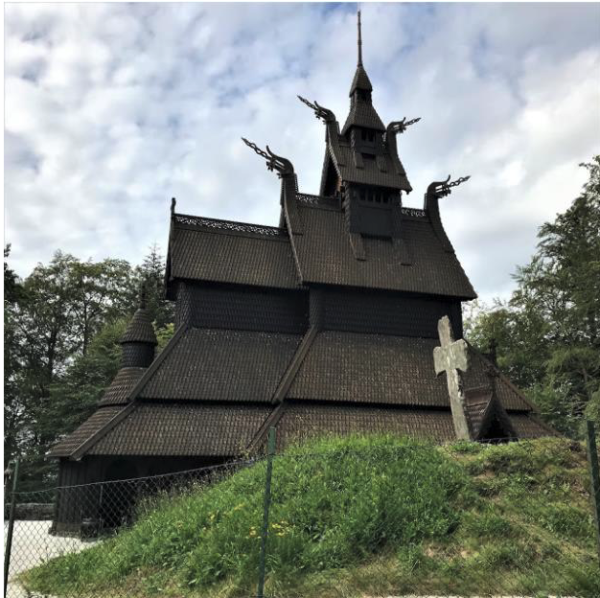 The church is set in a wooded area that lends a mystical air with mossy ground snaked with tree roots. 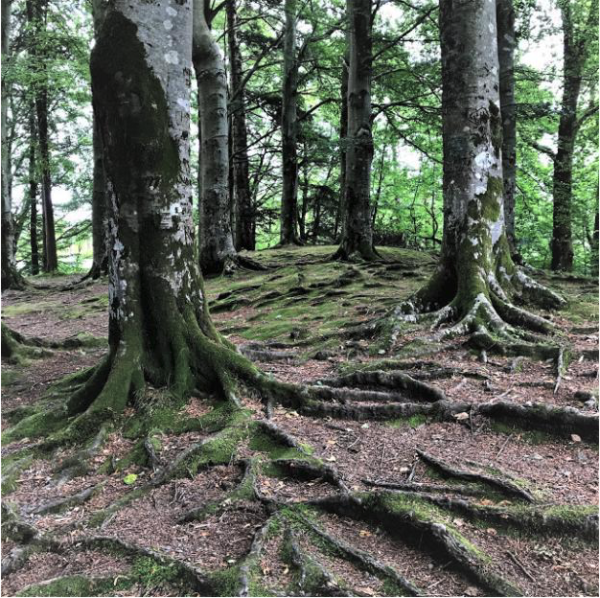 The ancient rough-hewn stone cross stands on a hillock nearby looking like it was out of Ingmar Bergman’s medieval morality tale, Seventh Seal. 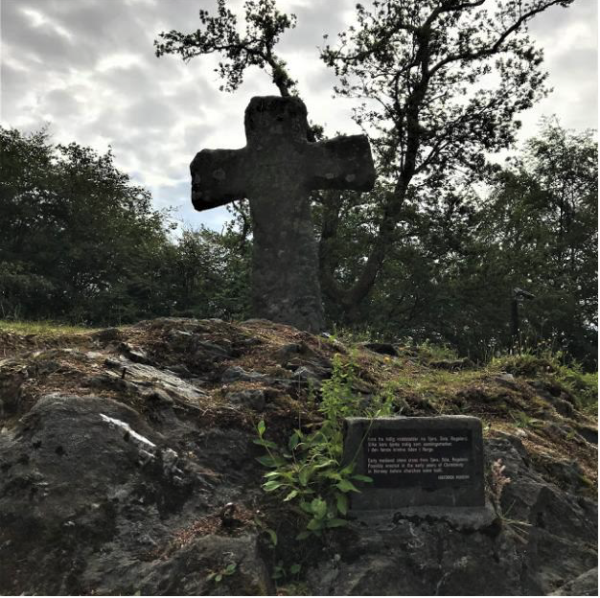 Adding to the surreal atmosphere, the church’s roofline was topped by stylized Norse dragons spouting fire to protect the building. However, the dragons were ineffective when, after standing for over 800 years, ironically the building was destroyed by arson. Reconstruction, completed in 1997, took six years. 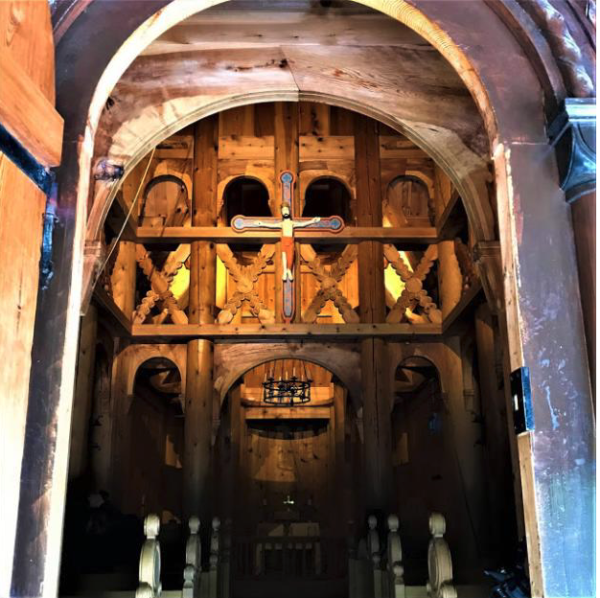 The interior is a complete contrast to the ornamented exterior: plain pine wood, simple altar and a carving of a dragon that seemed to me to be of Celtic design near the entrance. 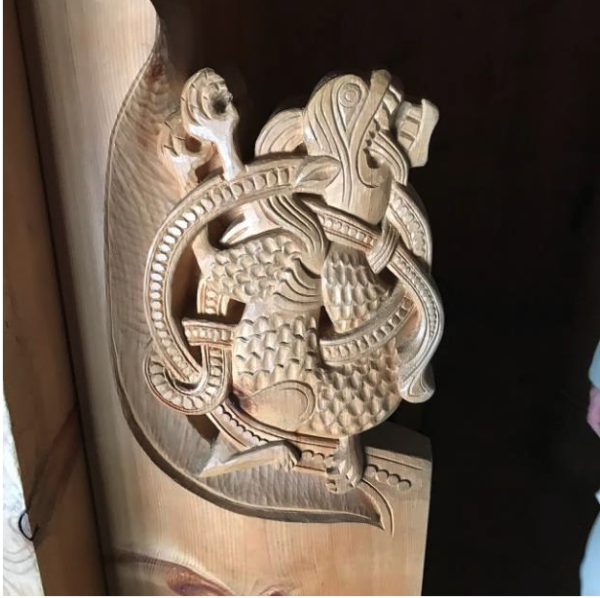 The small church and the surrounding woods are a place of contemplation in this troubled world and a reminder the past cannot and should not be erased. 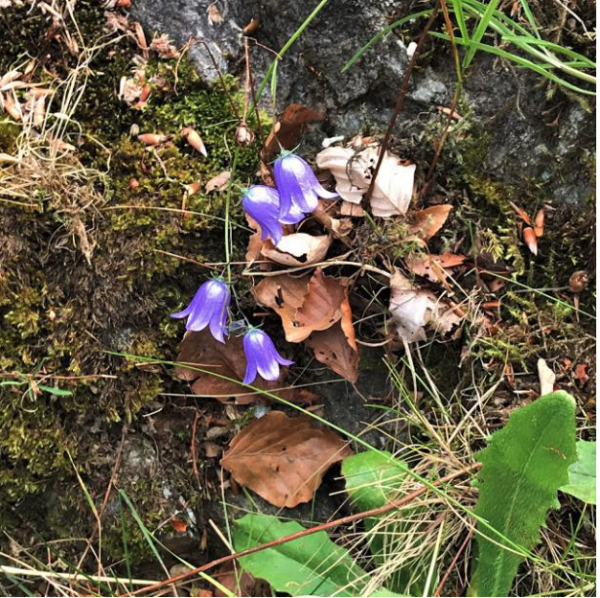 Judith Works is currently President of EPIC Group Writers and author of a memoir about Rome and the United Nations, Coins in the Fountain.