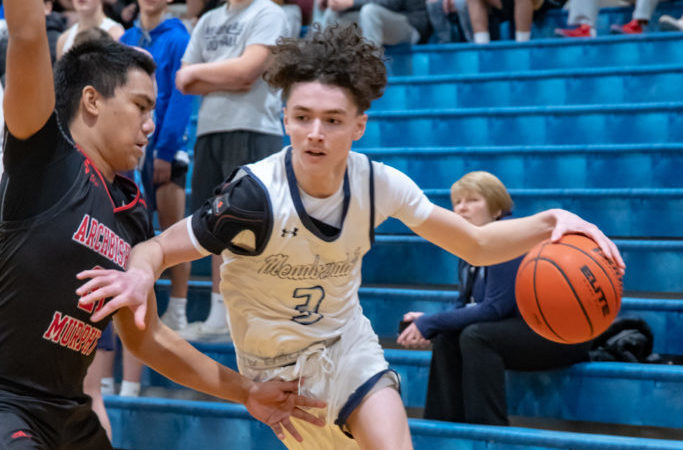 The Meadowdale Mavericks limped into the Stable Monday night for Senior Night, needing a win against the visiting Archbishop Murphy Wildcats to maintain their hold on the 4th place position headed into district playoff action later in the week.

Without two starters to begin the game, the Mavs were unable to find any rhythm offensively, managing just eight points in each of the first three quarters before making a run that fell short in the fourth, losing the game 50-40.

With Hunter Moen and Cole Nelson both out with leg injuries, the Wildcats were able to double team Colton Walsh inside, forcing the senior to adjust and alter shots that typically go down.

Nelson was able to return after halftime with the Mavericks trailing by eight, 24-16.

Archbishop Murphy outscored Meadowdale in the third quarter, 13-8, to take what looked like a commanding 13-point lead into the final period.  The Mavs were able to finally claw their way back into the game, pulling to within two points with 4:44 to play, when Nelson squared up and hit a 3-pointer to make it 40-38.

The Meadowdale defense was able to force a turnover on the next Wildcats possession and covert it into a transition score on a lay-in from Colton Walsh to tie the game 40-40 with 4:11 to play in the game.

That would be the last time Meadowdale would score.

Walsh scored half his teams points to lead all scorers with 20. Sage Oliveria led the Wildcats with 14.

The loss drops the Mavericks into the 5th-place RPI spot for the 3A District 1 playoff tournament.

The Mavericks’ next game will be Saturday, Feb. 15, when they visit Edmonds-Woodway High School to take on the 4th-place Warriors in the first-round playoff game. The game tips off at 7 p.m.

In other Meadowdale sports action on Monday, the Mavericks’ girls basketball team stumbled in their 2019-2020 regular season finale, falling to the Archbishop Murphy Wildcats 42-39 at Archbishop Murphy High School.

The Mavericks led at halftime 27-17, but scored just 12 points in the second half to take the loss. The 39 total points by Meadowdale was the team’s second-lowest scoring output of the season.

With the defeat, the Mavs finish the regular season with a 10-4 mark in Wesco League play, 14-6 overall, and fall to the No. 5 seed in the upcoming District 1 3A Girls Basketball Tournament. Meadowdale will play its first game in the double-elimination tourney on Friday, Feb. 14, against the No. 4-seed Snohomish Panthers; tipoff at Snohomish High School is set for 7 p.m.

— Story and photos by Scott Williams