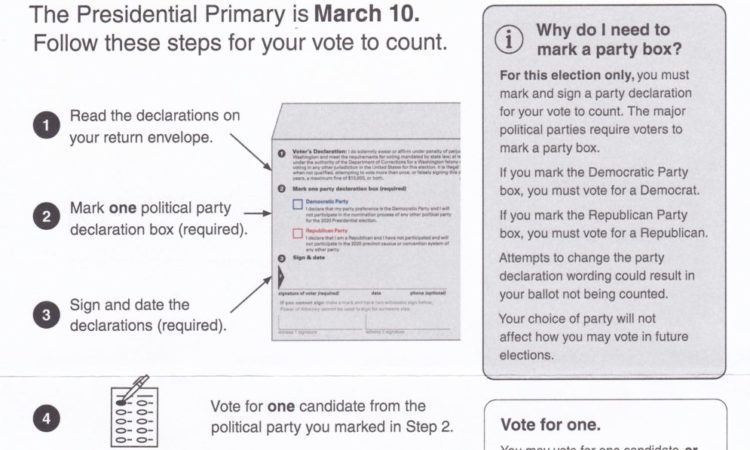 Are you planning to vote in the March 10 Washington State Presidential primary?

Do you consider yourself Democrat, Republican or Independent – and (here’s the kicker) do you care who knows?

Ballots were mailed last week, and by now they should have been received by all registered voters.  According to the information provided with the ballots, if you want your vote to count you must declare your party affiliation as either Republican or Democrat.  No, you can’t leave it blank, and there’s no option to declare as an independent.

The ballot return envelope provides checkboxes to designate party affiliation.  Voters must check one or the other, declaring themselves either a Republican or a Democrat, and by so doing further declare they “will not participate in the nomination process of any other political party for the 2020 Presidential election.” The ballot information goes on to explain the reason is that “the major political parties require voters to mark a party box.”

In a statement issued Tuesday, State Democratic Party Chair Tina Podlodowski explained that the “rules for both the Republican National Committee and Democratic National Committee require state parties who use primaries to award delegates to their national conventions to certify that the voters participating in their primaries are members of that party.  In states like Washington where party registration is not public record, party affiliation declarations for the limited purpose of complying with these rules [emphasis hers] are used to make sure the choices made by the voters are part of the nomination process.”

This is raising privacy concerns for many across the state from Main Street to the Capitol.

According to an article from our online news partner The Seattle Times , the Washington Secretary of State’s office has been “bombarded” with inquiries from voters who want to participate in the primary election, but do not want to declare party affiliation, and that Secretary Wyman herself has publicly declared that she will not vote in the primary because of this (Wyman ran and was elected as a Republican). The article goes on to say that the information voters provide about party affiliation “is given to the parties and is held by elections officials for 60 days. It is considered public information…”

Podlodowski criticizes Wyman for her decision not to vote saying, “Secretary Wyman can try to run from her and her party’s support for Donald Trump, but she can’t hide from her affiliation…simply by not voting.”

Regarding keeping the party affiliation of voters private, Podlodowski’s statement went on to say that “we at the Washington State Democratic Party have recognized that Washingtonians as a rule prefer to keep their party affiliation private, which is why we worked closely with the legislature in 2019 to ensure that public release of this information was not mandated by the legislation that reformed Washington’s presidential primary to be in compliance with DNC rules and moved our primary much earlier in the Democratic nomination process.”

Signed into law by Gov. Jay Inslee on March 14, 2019, the legislation states that “Voters who subscribe to a specific political party declaration under this section may only vote for a candidate of that party. Each list of candidates on ballots must be readily distinguishable from the list of candidates for any other party. Votes cast by persons making these declarations must be tabulated and reported separately from other votes cast at the primary and may be used by a major political party in its allocation of delegates under the rules of that party.”  See the full text of the legislation as signed by the governor here and the pertinent RCW here.

While the law does not mandate release of this information, under the Washington State Public Records Act (RCW 42.56), party affiliation declarations made on the ballot (unlike political party registration) become part of the public record and as such are freely available to anyone who files a request.