The blizzard swept in when I was 8 years old, covering streets and sidewalks and paralyzing the city

Snow was deep and overwhelming and beautiful

Along with boots and mittens and sleds came “Be careful. The ice is slippery underneath”

Until the next battle

They were so cool

I wanted to soar across the ground like that

When snow turned to ice in the late afternoon, sleds slid into snow piles, curbs and each other

When our hands and feet and noses became too cold, we trooped inside to warm up with fresh socks and hot chocolate

Watching out the window for the next round of play, we cheered as more snow fell and talked of cancelled school and faster sleds

That 50 years later, everything would be so different, the earth’s climate itself would start changing

That ice – such an ordinary part of daily life

Cubes small and large, in cold drinks and freezers

Foundations for the snow on the mountains inviting skiers, snow boarders, and more

So vast on mountain glaciers across the earth, described in my grade school geography books

So permanent in the world of an 8 year old

Would begin to melt, changing the world around us

Polar bears who hunt from floating ice glaciers are starving

Penguin populations who live and breed on ice are disappearing

Some say “we must do something”

Others say “this is just the ebb and flow of nature”

I watch the bird feeder in my neighbor’s yard

Resembling a castle tower with many windows, attached to a slim pole, it hangs about 4 feet above the ground

Finches and sparrows perch at the openings, their heads darting in and around the feeder windows

Who, in turn, are run off by the swooping crows

Black, sleek and commanding, they turn sideways to get the best access

The pecking order in play

And the cat watches from the corner of the deck

Seeking an opportunity that doesn’t come

They hover on nearby branches and bide their time

Comparing notes with their chatter

Playing with each other until the coast is clear and the birds, large and small, take flying breaks

They jump, landing on each other, picariously clinging to the steel swinging handle

Confidently leaping to the hanging house

Happy to hang up-side down and double up

Acting out their ubiquitous claim to available booty

Powering short limbs in all directions

Learning to race, first with Dad, then playmates

Jogging for the bus

Carrying chairs to soccer fields and blankets to bleachers

Resolve and determination, warding off

The need to reach for a helping hand or helpful tool

Narrowing the horizon with grace 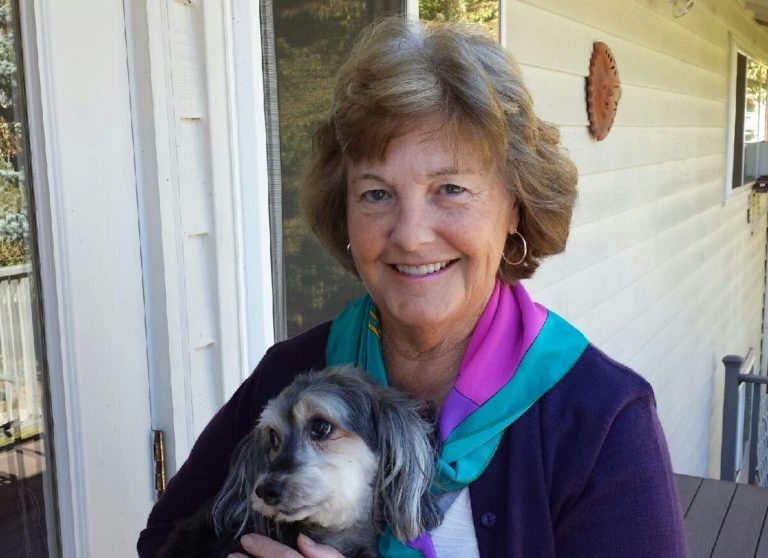 Gretchen Murphy grew up in Ballard. She and her husband, Jack, raised three children in Bothell.  She taught Health Informatics at the University of Washington and retired from the School of Public Health faculty in 2016. She is enjoying retirement and shares summer events with her family at her house on Whidbey. Previously engaged in academic writing projects, she now writes poetry and participates in the EPIC Poetry Group.  “Poetry brings diverse perspectives on how to see the world around us.  I find it very satisfying.”