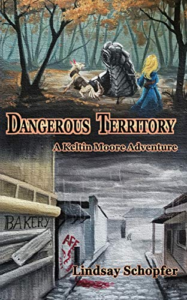 Are you ready for an adventure into Dangerous Territory with beast hunter Keltin Moore? This is the third in a steampunk-inspired fantasy novel series where characters are tested beyond their limits. This world is populated by fantastic creatures and hidden perils. Keltin Moore will have to rely on his instincts, smarts, ingenuity, brilliant weaponry, and courage. But will that be enough?

When Keltin went into a beast hunting business with his two friends and partners, he never imagined the dire call for help that would pull him into a war-ravaged territory. Now he must help a family of lost, innocent victims, including one young woman who had once been very special to him. He loved her. He will have to venture beyond the border, into Dangerous Territory, try to find them, and if he is able to do that, he will still need to guide them back to safety. The action is non-stop as Keltin Moore fights against government agents, war-time enemies, and vicious creatures.

The characters are so interesting, each with their own story and motives that are skillfully revealed over time. The setting is straight out of imagination and grows in descriptions that engage all the senses. As with the other two books in the series, this story will keep you guessing as you turn the pages faster and faster.

Lindsay Schopfer is an award-winning fantasy author. In addition to The Adventures of Keltin Moore, he’s written a science fiction survivalist novel Lost Under Two Moons, and the short story collection Magic, Mystery and Mirth. He teaches workshops and master classes on the craft of writing, and is a volunteer mentor for Educurious, a Gates Foundation-funded program designed to connect high school students with professional writers. He also teaches creative writing at South Puget Sound Community College. He’s also a busy, first-time father of twins and has written a series of articles for ParentMap magazine.

Find out more about the author on his website at blog.lindsayschopfer.com, and hear more from Lindsay Schopfer himself on the podcast, A Novel Talk with Lindsay Schopfer, co-hosted by Wendy Kendall and Carl Lee