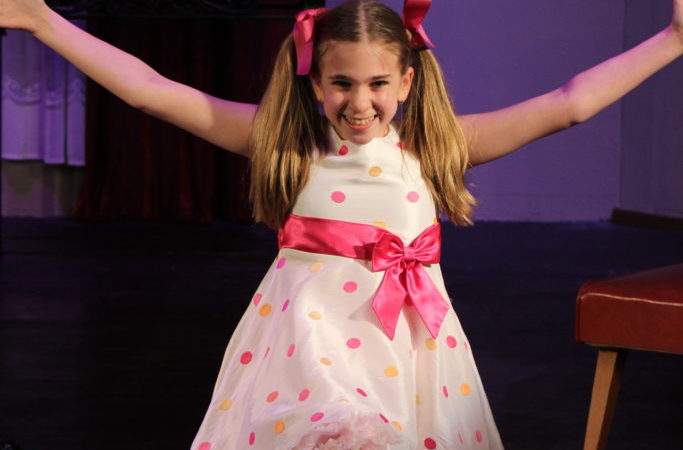 This 1992 musical created by Joel Paley and Marvin Laird isn’t afraid to break a few funny bones (and maybe a knee cap or two along the way) in delivering a dark and hilarious tale of a talented girl with lofty dreams and no conscience.

In Ruthless! The Musical, we follow Tina Denmark, a dangerously ambitious 8-year-old who fights for fame any way she can. Tina may look adorable, but don’t let her Cheshire smile and bouncing curls fool you. Her adoring, if a somewhat bewildered mother, Judy Denmark, wants nothing more than a nice childhood for her daughter. These two may have conflicting ideas of what’s best for Tina; however, they are more alike than they know. Director Shileah Corey and her multi-generational cast from Ballyhoo Theatre pulled no punches making this musical their own.

Shauntal Pyper opens the show as Judy Denmark, Tina’s loving and devoted mom, who could give June Cleaver a run for her money as the ultimate “nice” mother. Susan Connors is a hoot to watch as Sylvia St. Croix, a tenacious manager who wants to help young Tina reach the stars. This is Connors’ first role with Ballyhoo Theatre and it’s no surprise she fits in seamlessly.

Nava Ruthfield throws on her tap shoes and fluffs her pigtails to become Tina Denmark, the unrelenting and slightly scary, soon-to-be child star. Ruthfield hits all the right notes and makes you thankful Tina Denmark isn’t your child. Ruthfield is bold and on point throughout the show. Though young, her professionalism and command of the stage are impressive.

Krista Marken takes on the role of Tina’s teacher, Miss Myrna Thorne, who has her own agenda for how things should go. Claire Sloss plays Louise Lerman, Tina’s rival. This is her first time taking the stage with Ballyhoo Theatre. Sloss makes the most of her time on stage and adds a bright pop of energy to the production. Carol Richmond tackles the role of Lita Encore, a tough theater critic and Tina’s cold grandmother, who’ll make you want to call your own grandmother and tell her how much you appreciate her. Kelsey Harrison joins the cast as Eva Allabout, the personal assistant to Ginger DelMarco. If you’ve ever wondered how wonderful it would be to have a personal assistant, Harrison will make you rethink that.

The backdrop of the musical has a mid-century feel. The costumes and set reflect this time period and are thoughtfully arranged. The lighting flowed effortlessly throughout the scenes and supported the atmosphere and mood. All the musical aspects of the production were fabulous. It’s obvious this is a very musically talented cast with strong vocal skills. The timing of the music with their movements was well-rehearsed and emphasized the delivery of their lines, taking the humor to the next level.

“Ruthless! The Musical” is a lively show with first-rate music, strong acting and side-splitting laughs. It has a special blend of dark humor that is so good and so wrong at the same time. While there are a few adult words here and there, I didn’t find them to be overwhelming or gratuitous. Due to this, the musical is rated PG-13.

I thoroughly enjoyed the show as did my tween. He called it hilarious and rated it a 10/10. This is one of those rare shows that can be enjoyed by almost all ages. If you are looking for a chuckle or two, take your mom, your significant other, or your own rambunctious child. You will be happy you did.

Tickets can be purchase at the door or through Brown Paper Tickets.