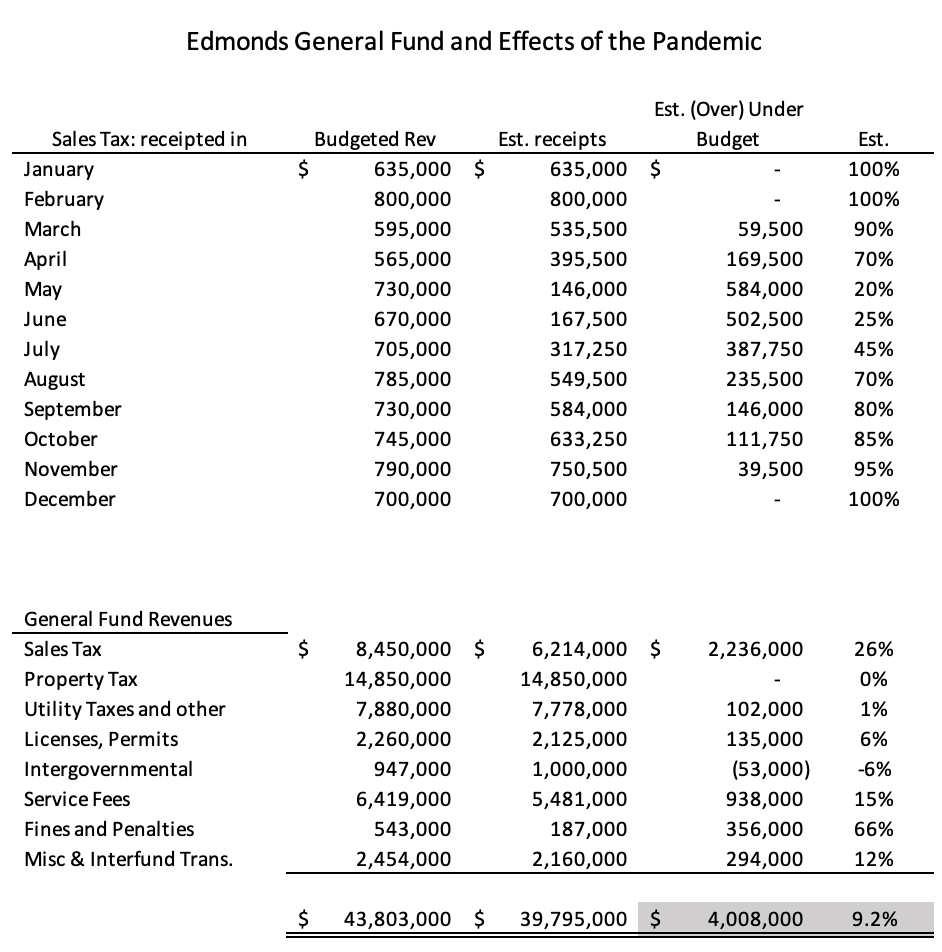 Turley said the goal of his Tuesday briefing was to share the city administration’s current thinking on how the pandemic will affect Edmonds’ general fund. He also promised to return for monthly council updates on the topic.

The city created projections two months ago that estimated a $4 million reduction in city revenues due to the pandemic — 9.2% of the city’s nearly $44 million in budgeted revenues. To address the projected shortfall, the city so far has identified $271,000 in savings from suspending new hires and $1.3 million in expenditures “that have been postponed, can be postponed or can be permanently eliminated,” Turley said.

In terms of where the city is projecting revenue reductions, the main areas are sales tax, estimated to drop 26%, or $2.2 million, and fines and penalties (for example,  traffic tickets), expected to decrease 66 percent, or $356,000. The city is also anticipating a decline of at least 6% — or $135,000 — in building permits.

Service fees, like those charged for parks and recreation programs, are estimated to decline 15 percent, or $938,000. Turley noted that in the case of Parks and Recreation programs, while revenue decreases due to canceled classes, expenses also decrease since class instructors aren’t paid. The miscellaneous category, which includes investment interest and facility rental, is expected to drop 12 percent or $294,000.

On the plus side, intergovernmental revenues, which include liquor and marijuana taxes, are projected to rise by 6%, or $53,000, Turley said. “Liquor sales have actually increased over the last few months so we’re thinking that revenues there might actually go up a little bit,” he said.

The city also reviewed sales tax month by month in an effort to predict the impacts of the virus and created a graph charting out a predicted “Shape of Recovery” to illustrate the pandemic’s impact on Edmonds.

In these early projections, the city would lose 80 percent of sales tax revenue through May, see a rebound starting in June, and “by the end of the year the economy would be mostly back to normal,” Turley said. “I’ve got comments that we might be a little optimistic, and I agree. We may tweak this in the next month to make it a little more pessimistic, make the recovery a little more slow,” he added.

Edmonds does have sales tax revenue figures for the first quarter of 2020 (see below) and the first three months “are actually ahead of budget,” Turley said. The biggest surprise, he said, was the month of March, where the city expected to see a dip as pandemic-related business restrictions began. Instead, the city collected 14% more than projected. 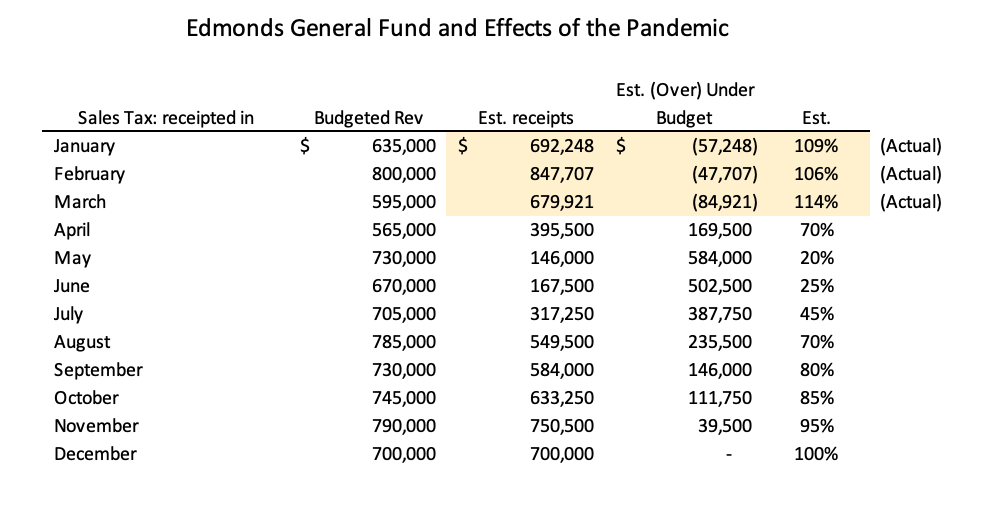 Turley then addressed the city’s general fund balance, noting that both city policy and best practice calls for keeping a general fund annual reserve of 20%. (See below.) 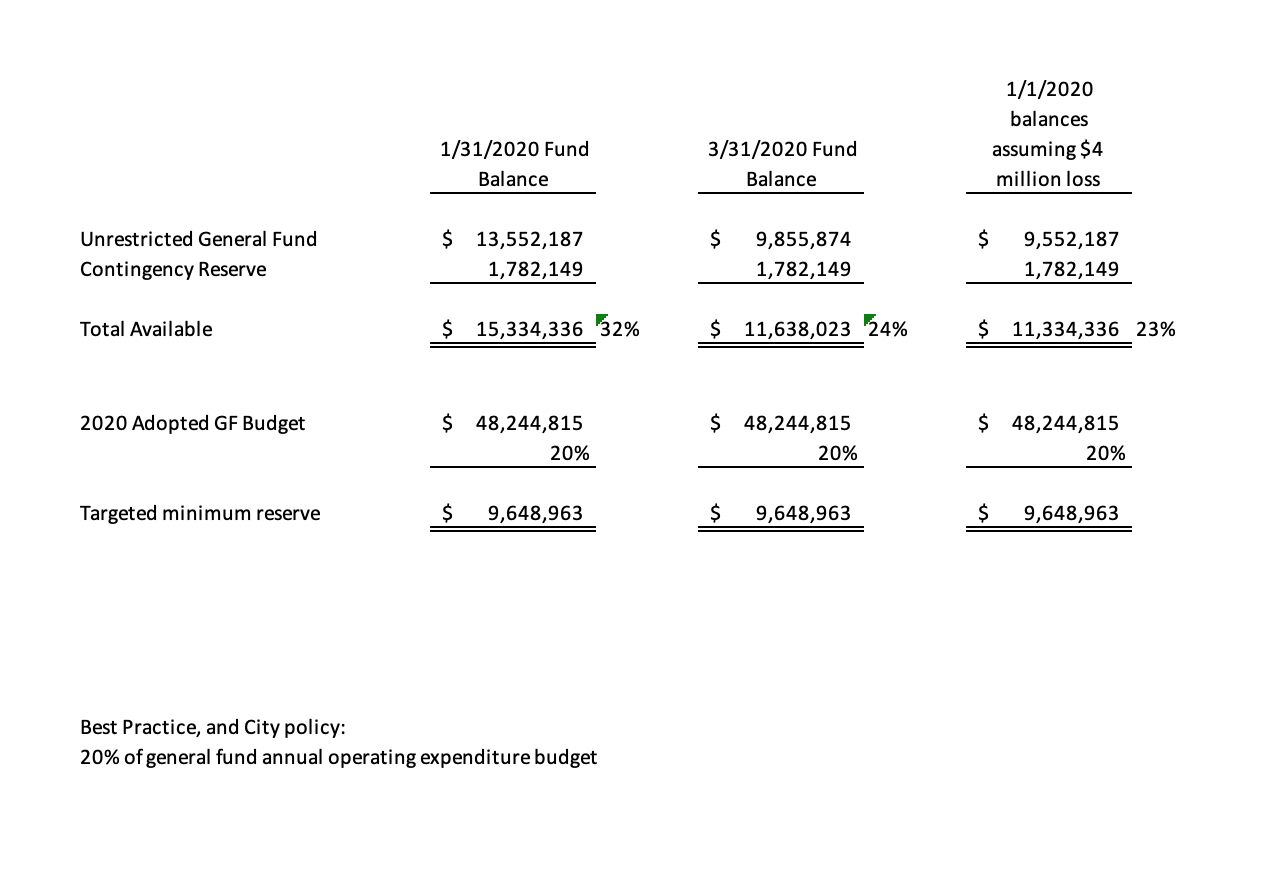 With a 2020 general fund budget of $48 million, the targeted 20% minimum should be $9.6 million. The good news is, at the beginning of 2020 the city had about $15 million in reserves — or 32%, Turley said. Those fund balances dipped to 24% in March, but that’s the nature of the budget, which is “very cyclical,” Turley said, adding that the reserves will increase again when property taxes arrive in May. Due to the healthy reserves, even if the city does experience the projected $4 million revenue decrease due to COVID-19, it will finish the year with 23% in reserves.

However, Turley stressed that he was providing those numbers only for context, adding that the city still is taking steps to tighten its belt. “We don’t want to go into next year any worse off than we are right now,” he said. “We want to do everything we can to fill the gap this year, primarily because we have no idea what this virus is going to look like or where it’s going to take us in the future. This could be a long-term problem.”

He then ran down the list of staff positions the city may not fill at all due to the pandemic, including a ranger naturalist, some storm and street maintenance workers, a public works finance manager, a wastewater treatment plant operator trainee and a crime prevention engagement coordinator — resulting in over $270,00 in savings. Hiring has also been delayed for parks seasonal maintenance workers, a web system analyst and an associate planner. “We’ve budgeted a full year of salaries for these people,” Turley said, so savings will result if the positions are not filled until summer or fall.

The city has also identified specific expenditure reductions, including parks repairs and maintenance, fire hydrant repair and maintenance,  and citywide reductions in supplies, travel and professional services.  In addition, Edmonds has $300,000 budgeted for open space land acquisition that could be put off for a year, as well as “two or three large capital projects” that could be delayed or scaled back.

“This list is early and evolving as the pandemic evolves, and we’re confident that the administration will be able to identify and secure these cost savings… to close the $4 million gap,” Turley said. Despite the cutbacks, the administration anticipates “very little” impact to city services, he added.

Turley also said that if necessary, the city could take more drastic measures, although these are not currently planned. These include reducing employee overtime, a voluntary reduction in employee hours, early separation incentives, and furloughs and layoffs.

Council President Adrienne Fraley-Monillas asked what impact the pandemic has had so far on Edmonds car dealerships, which provide a significant chunk of the city’s sales tax revenue. Economic Development Director Patrick Doherty responded that car sales “really tanked” under Gov. Jay Inslee’s stay-at-home orders aimed at minimizing the spread of COVID-19. The governor began allowing car sales again in early May and indications are that dealerships “definitely are seeing the results of pent-up demand that wasn’t being met during those six weeks or so,” Doherty said. While auto sales “certainly aren’t back to normal,” dealerships believe “they should see some healthy return…as we go forward,” he added.

In other matters Tuesday night, the council approved the following items:

– A proposal to purchase chemicals for a nutrient reduction trial at the city’s wastewater treatment plant.

– A budget amendment to transfer $100,000 from the city’s Homelessness Response Fund to the newly-created Housing Relief Program. (See our earlier story here.)