A favorite meme I’ve seen floating around social media goes something like this – “If I’d known that March would be the last time I could dine in at a restaurant, I would’ve ordered dessert!”

Things are still in flux, but glimmers of hope appear on the horizon.

This week saw the reopening of Sante Fe Mexican Grill and Cantina in downtown Edmonds. T & T Seafood and Boiling Fish have both just reopened for take out in the Ranch Market shopping center on Highway 99.

Next Thursday, Walnut Street Coffee will also reopen for take out.

Also this week, to a chorus of hallelujahs, the Washington State Liquor and Cannabis Control Board announced an easing of restrictions, enabling bars to serve cocktails to go with the purchase of food.

Judging from our directory of restaurants, a sizable majority of eateries continue to operate, doing their best to pivot and adapt in accordance with the rules of the moment. Most continue to find ways to engage customers, employ as much staff as possible, and make the best of what is an otherwise calamitous situation.

From my socially distanced perch at Salish Sea Brewing, where I work part time as a “beer-tender” and server, I see a steady stream of concerned residents doing their best to continue to patronize a restaurant they prize. Owners Jeff and Erika Barnett made the decision that they would keep as much staff as possible employed. They’ve maintained their full menu and even added gyros and chicken strips to it.

A steady stream of customers arrive with empty growlers for takeout beer and food. It’s not unusual for patrons to leave with food, beer and an armload of Salish apparel.

Far from pulling the plug and waiting for better times, Salish Sea Brewing has fully embraced all social distancing guidelines and are even selling hand sanitizer and masks. They’ve provided discounts to first responders and have built “kegerators” (modified floor refrigerators with taps for two of the smaller skinny kegs of beer), provided mash for Scratch Distillery‘s hand sanitizer project, and have generally been a positive presence in our community with dozens of acts of kindness and generosity. That’s the sort of thing people notice. We may be down, but we’re not out.

There are similar stories all over town. But as much as gift certificates, take out and delivery help staunch the bleeding, it’s not where restaurants need to be to return to profitability.

Still, I can’t help admiring the tremendous tenacity and creativity I see each day as restaurants struggle to respond.

Walnut Street Coffee’s Pam Stuller closed her coffee shop on March 20. She continued doing e-commerce orders. It was a decision she doesn’t regret. “I needed my customers to feel safe, but it also came down to the fact that I didn’t need any of my staff to feel like they were putting their lives on the line to make coffee.”

Stuller is preparing to reopen with to-go orders May 14. She’ll have a payment station at the front door and a pickup station at the garage door. It’s a system designed to ensure social distancing.

While closed, she has been very busy helping with facilitating and maintaining the Edmonds Locavore merchants website. Dozens of local merchants have set up kits of their wares available for sale on the site. It’s exceeded their wildest expectations, providing participating merchants with some much-needed revenue while proving that Edmonds residents are anxious to do something to support our local shops.

Kali Kelnero of Kelnero Bar was relieved to be allowed to move from cocktail kits to actual take-out cocktails. But during the hiatus, she’s posted a number of instructive videos demonstrating her cocktail making prowess. You can view her tutorials here.

On top of that, Kelnero has been the place to score local baker Conor O’Neill’s delectable creations on Wednesday afternoons. 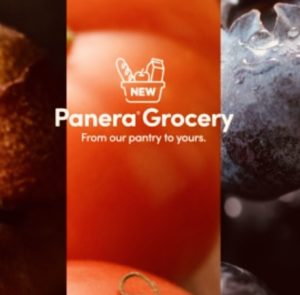 National chain Panera Bread, with a location on Ballinger Way in Edmonds, has also been reinventing itself. In addition to providing take out at the drive-thru window, Panera is also getting into the grocery business. Panera’s downloadable app allows you to order produce, dairy and bakery goods for pick up or delivery.

These are just a few examples of how restaurants are responding around town. Feel free to add your favorite example of enterprising restaurants finding ways of serving their customers in these times of social distancing in the comments below.