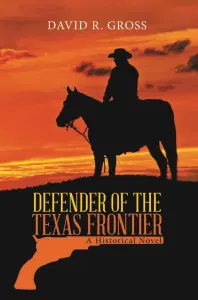 Defender of the Texas Frontier, by David R. Gross

Looking  for a fascinating read that brings the personalities  of the people who made history spring to life? Enjoy a novel about  the American frontier in the state of Texas and learn about a larger-than-life leader named  John  Coffee Hays. This Defender of the Texas Frontier — and the brave men he led — played a major role in shaping the events of their times. The book’s historical details are intricately researched  and  presented  in a very entertaining  way.

Witness the life and times of John Hays through the perspective of his fictional close friend John Caperton. We begin with young John Hays as he fervently wishes to join the army in the state of Texas. He has to prove his  value, as does his friend, while they learn how to survive in the elements and against  their  challenging combatants, first  Native American  tribes  and  later the Mexicans.

At  the height of his effectiveness, John Hays commanded a skilled band of Texas Rangers. It was a group of men who remembered grievous recent times at the Alamo,  and the massacre at Goliad. They were determined  to defend their families  and homes. They trained continually together and became feared by those who opposed  them. They were called Los Diablos  Tejanos – The Texas Devils. As their leader,  John Hays’ reputation preceded  him — he  bcame known as Devil  Jack.

In  contrast to  Hays’ disciplined army life and battles, there is  also a tender description of his  family life and wedding. This  comprehensive  story  tells  all  of his  life accomplishments , including a surprising turn after his time in the army.

An Edmonds resident, author David R. Gross  is  a  retired  veterinarian who also taught and  did research  at  Texas A & M University’s College  of Veterinary  Medicine for 16 years. You can find out more about the author and his other books and writings at docdavesvoice.com.