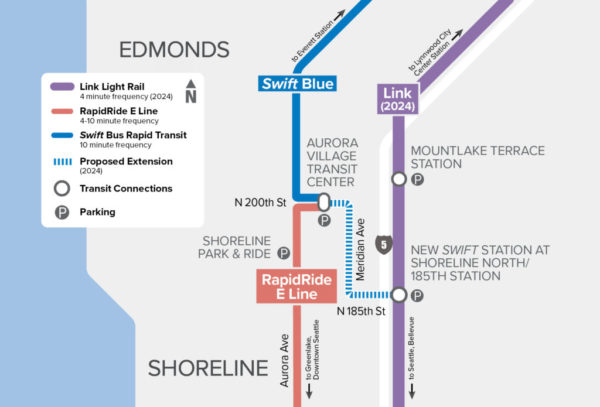 Community Transit Thursday announced its preferred route to connect the Swift Blue Line bus rapid transit service with Sound Transit’s Link light rail in Shoreline, in 2024. The proposed alignment via 200th St., Meridian Avenue and 185th Street would continue to use the Aurora Village Transit Center on its way to connect to light rail.

In February, Community Transit conducted an online survey and community outreach effort to gather feedback from customers and the public. The survey presented three possible extension routes to connect the Swift Blue Line to the 185th Street light rail station at Interstate 5, as well as other possible upgrades to the Blue Line corridor.

“We appreciate the valuable feedback we received from this process,” said Community Transit Director of Planning and Development Roland Behee. “We heard that maintaining bus-to-bus connections at Aurora Village Transit Center was a key priority, and also gained insight into rider preferences for future transit upgrades along the Highway 99 corridor.”

“We will continue analyzing the survey results and work with the public and local jurisdictions as we move the Swift Blue Line Expansion toward project development,” Behee said.

Further information about proposed corridor upgrades is expected to be released in August.