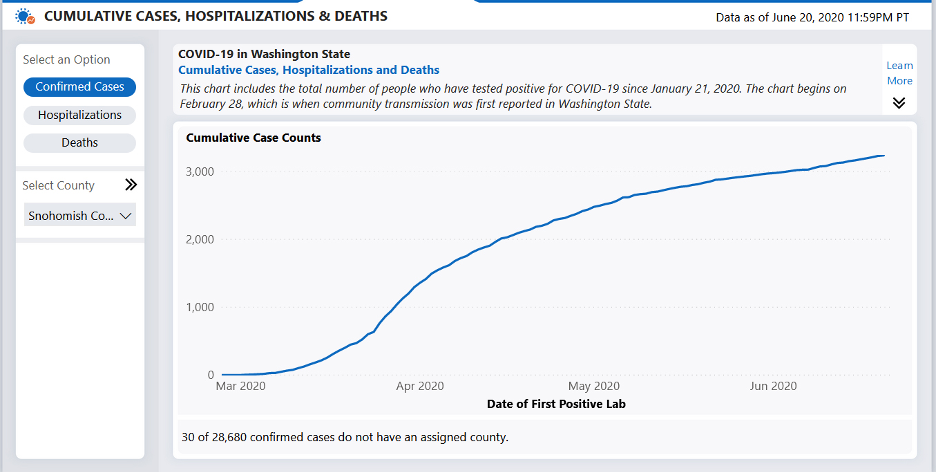 Prior to this week, Washington State — and Snohomish County in particular — were not seeing the runaway surge in COVID-19 cases experienced in several states nationally. But that appears to be changing, with sharp increases this week in several areas of our state, most notably Yakima County, the new state hotspot.

In response to the surge there, Gov. Inslee announced Monday that he will issue a proclamation early this week requiring face coverings in Yakima County public spaces.   According to an update issued Monday afternoon by the Washington State Coronavirus Response Joint Information Center, the Yakima Valley has the highest per capita rate of COVID-19 on the West Coast and Yakima County has 22 percent of the state’s COVID-19 hospitalizations.  Inslee said Yakima County’s case count is higher than the entire state of Oregon, and without immediate action case counts could double in the next two weeks.

So far, this upsurge has not reached Snohomish County, where numbers continue to remain relatively stable.

The first illustrations Monday compare overall numbers for the state as a whole with those of Snohomish County. This week we are also including selected metrics for Yakima County as an example of an area close to home where COVID cases are surging. 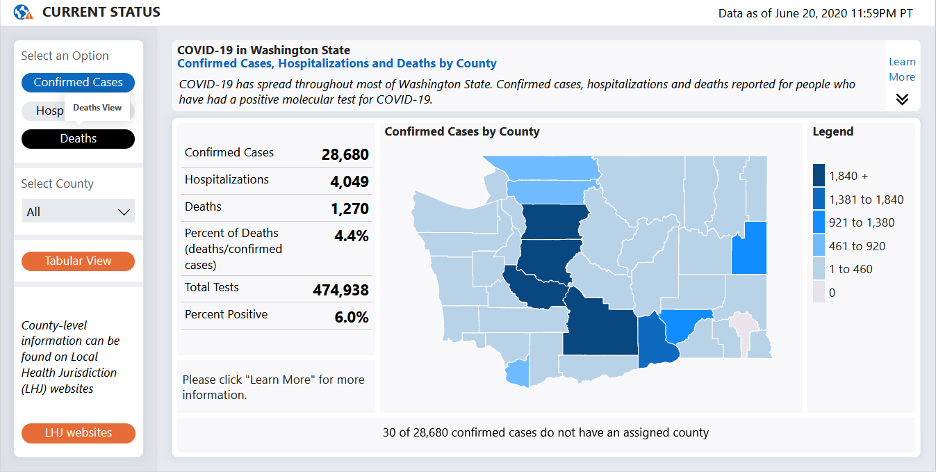 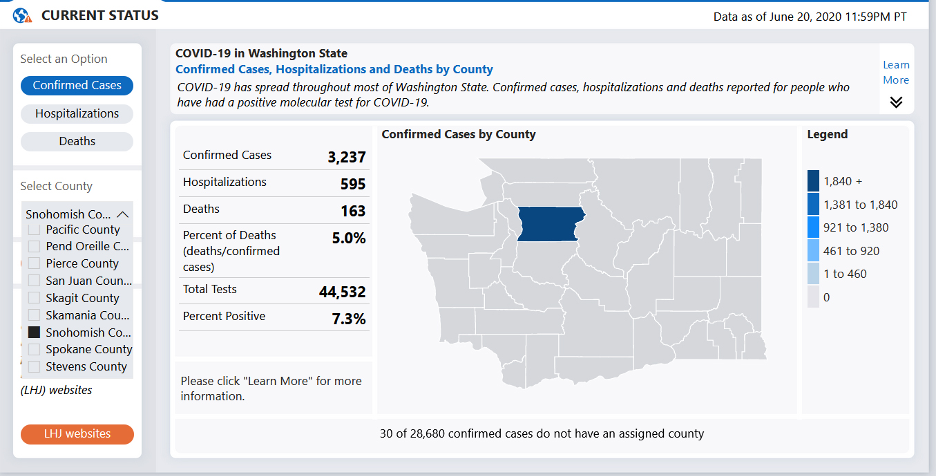 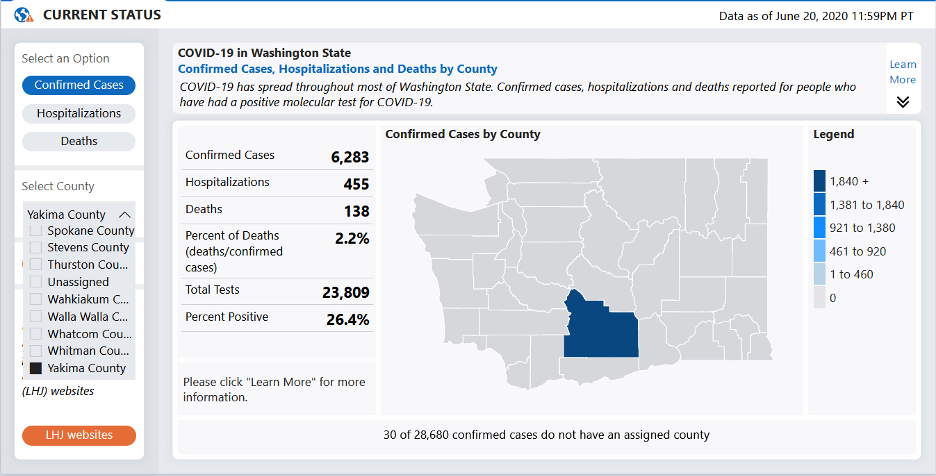 Taking a closer look at the numbers, Snohomish County’s daily active count continues to drop faster than that of the state, as the following two bar charts illustrate: 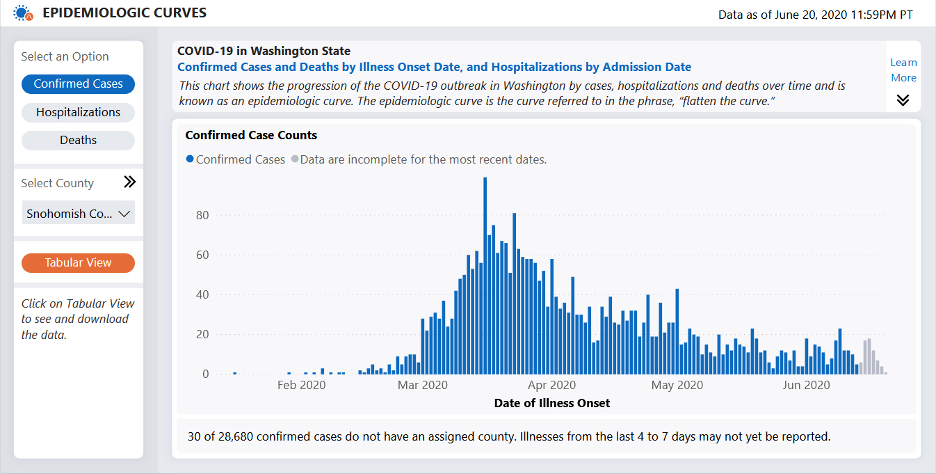 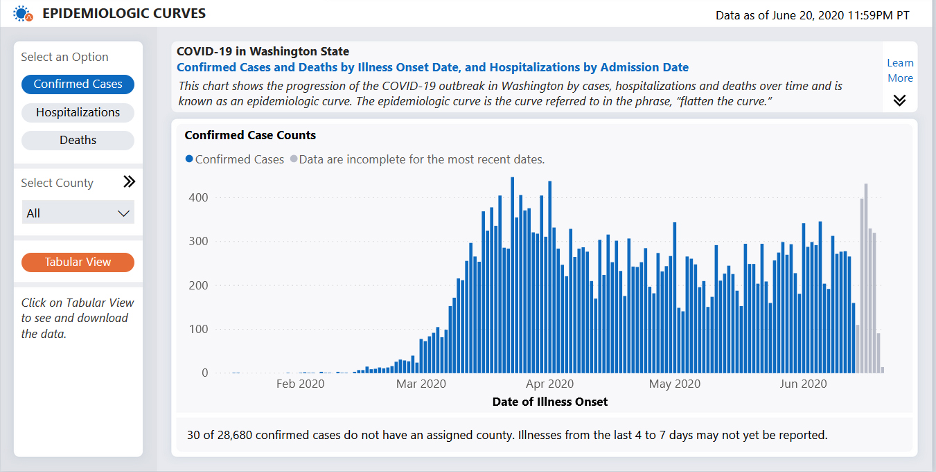 Note that preliminary counts of the most recent data (grey bars on the right) show Snohomish County continuing to maintain the steady increase in cases of the past month. This is in contrast to the statewide figures, which show a significant resurgence.

This is reflected and enforced by the cumulative case count comparison.  The key indicator here is the shape of the curve: Note that after a rapid rise in late March, the curve for Snohomish County has been steadily flattening since mid-April, while the curve for the state continues to climb steadily over that same period. 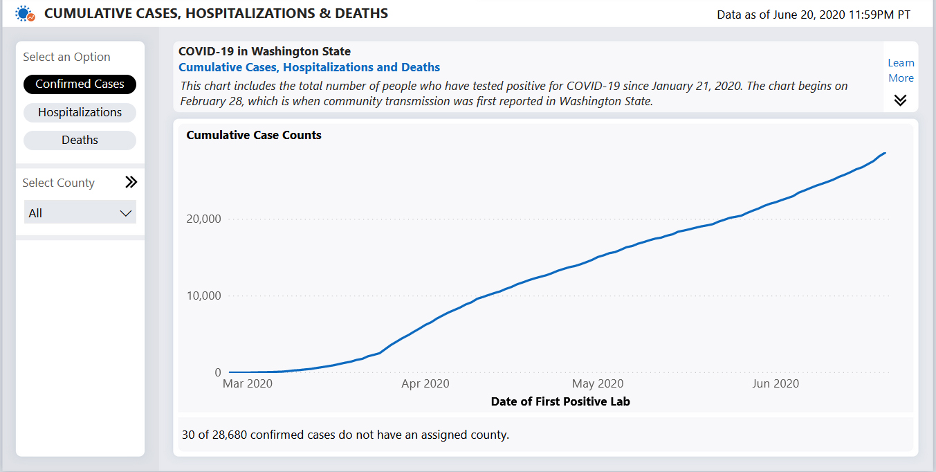 By contrast, the curve for Yakima County shows a sharp upward tilt, reflective of the surge in cases in that area. 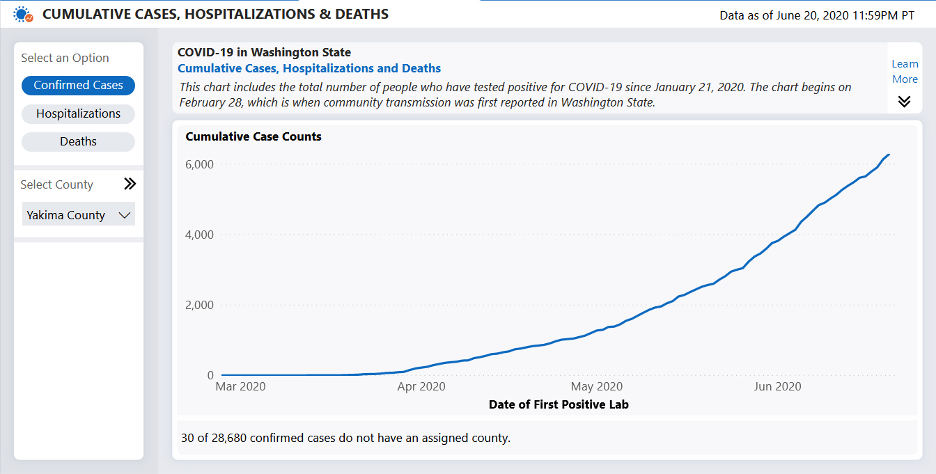 The COVID-related deaths show a similar pattern, with deaths leveling off in Snohomish County, while the curve continues to rise statewide. 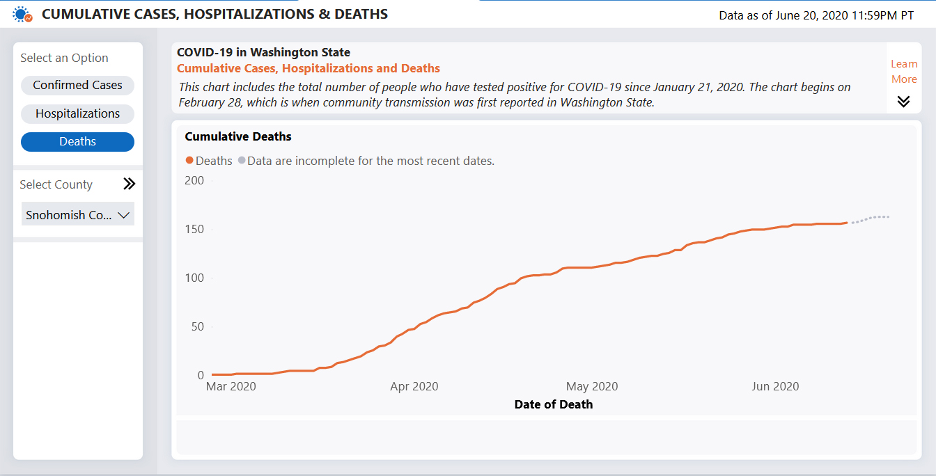 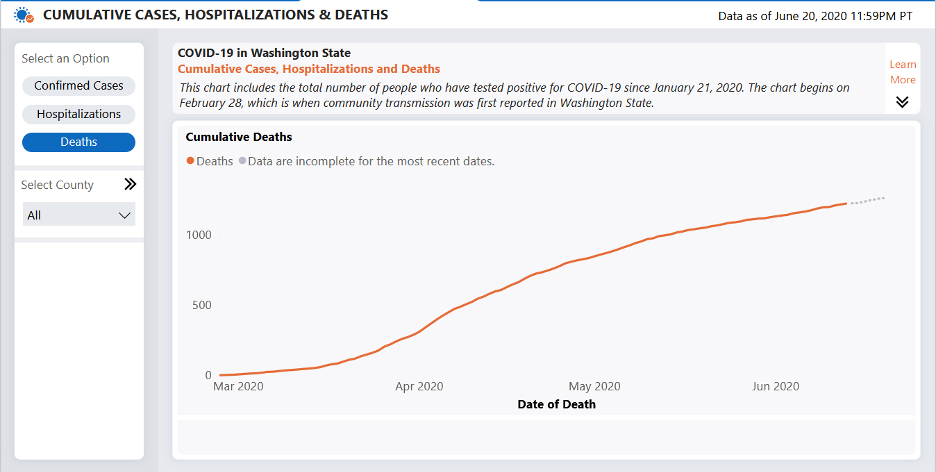 Once again, Yakima County’s death numbers follow the other increases in that area, with the most recent data showing a faster rate of increase: 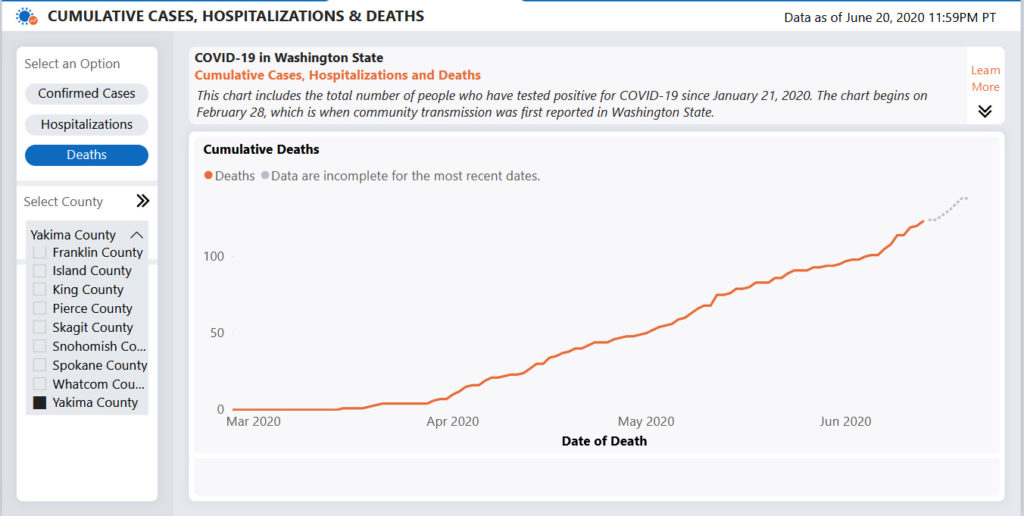 While not available for individual counties, the demographic charts continue to illustrate the disproportionate impact of the COVID-19 epidemic on older victims. Note that while the majority of infections are among those in the 20-60 age groups, COVID-related deaths are heavily skewed to the older demographics, with 90 percent of the victims in the 60-plus age demographic. 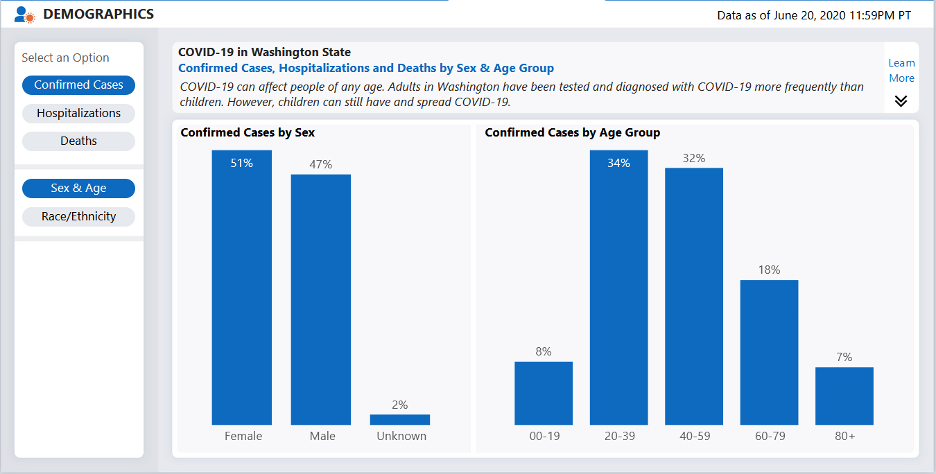 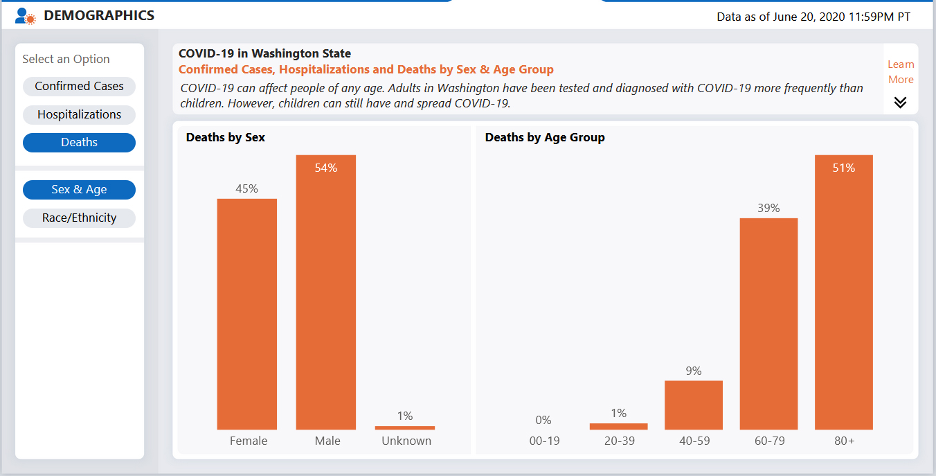 Additional demographic information provided by the state included a breakdown of case numbers and deaths by ethnicity. Despite making up only 13 percent of the state’s population, Hispanics represent 43 percent of the confirmed cases as of June 20. 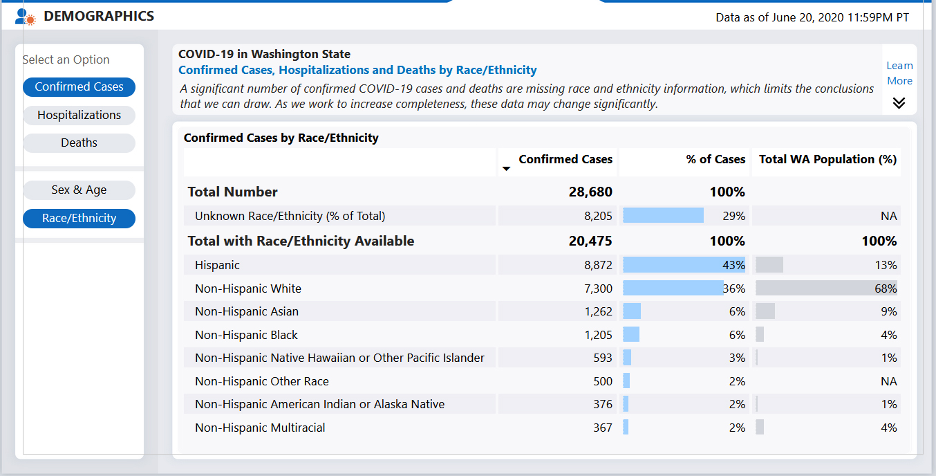 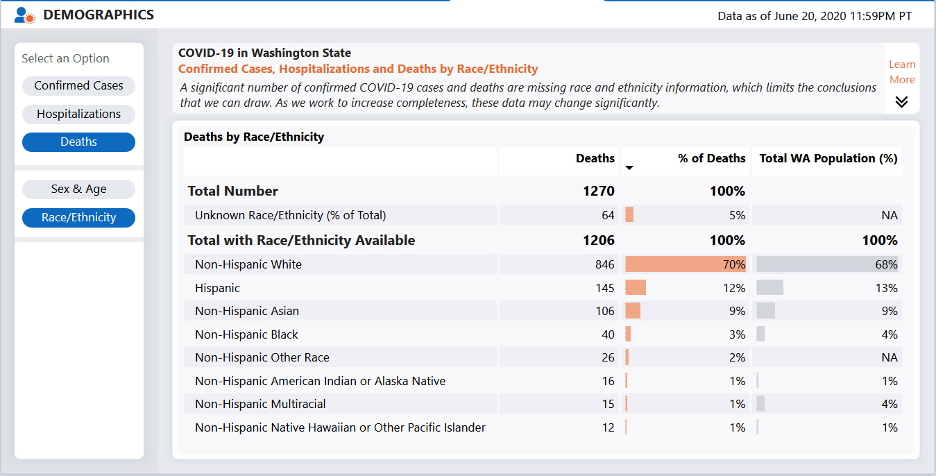 A comparison of daily hospitalizations also shows Snohomish County continuing to make better-than-average progress, with a steeper drop from the highs of mid-March than the state overall. 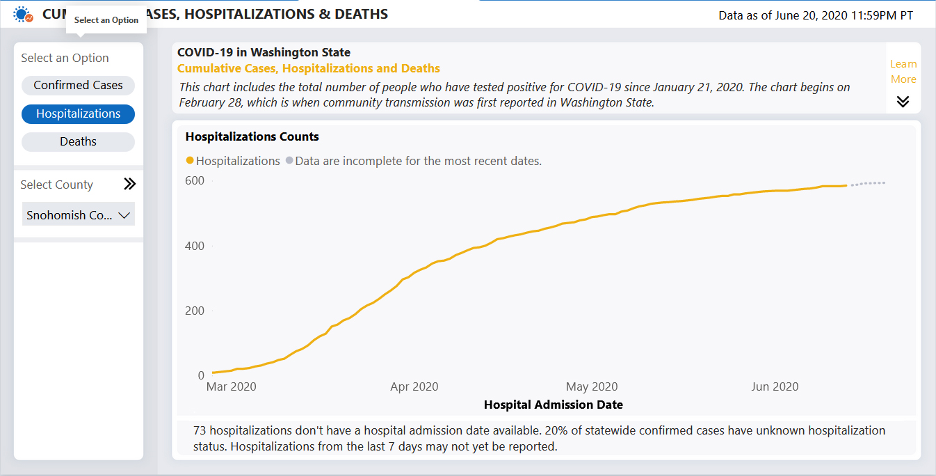 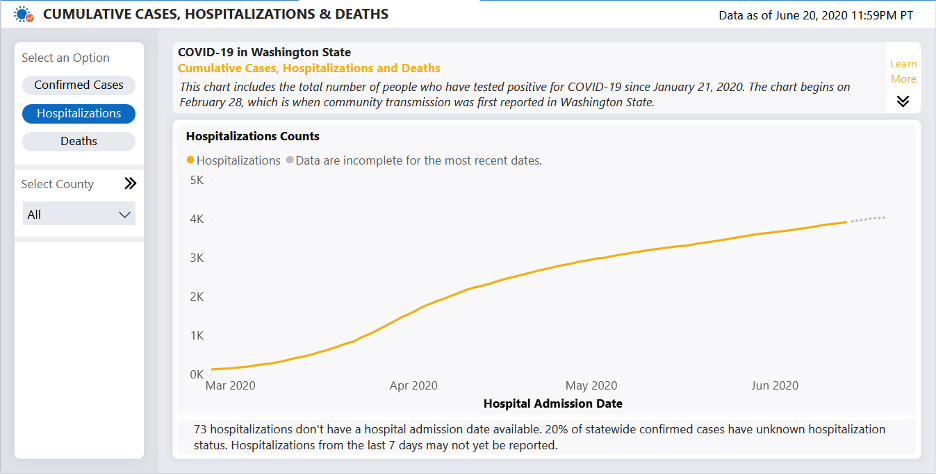 Again, Yakima County is proving to be the hotspot in our state, with hospital counts on the rise. 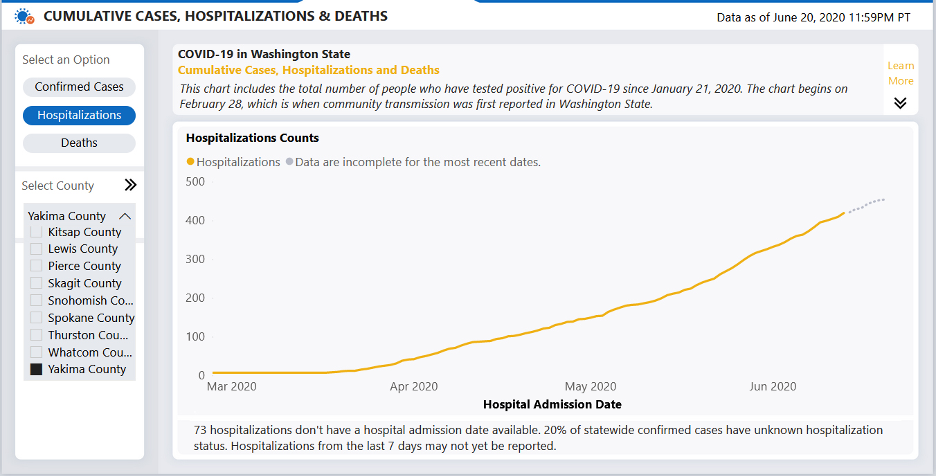 Testing activity is increasing at the state level for the second week in a row, (note the grey bars for the most recent June dates), while Snohomish County has been maintaining a relatively constant level of testing. 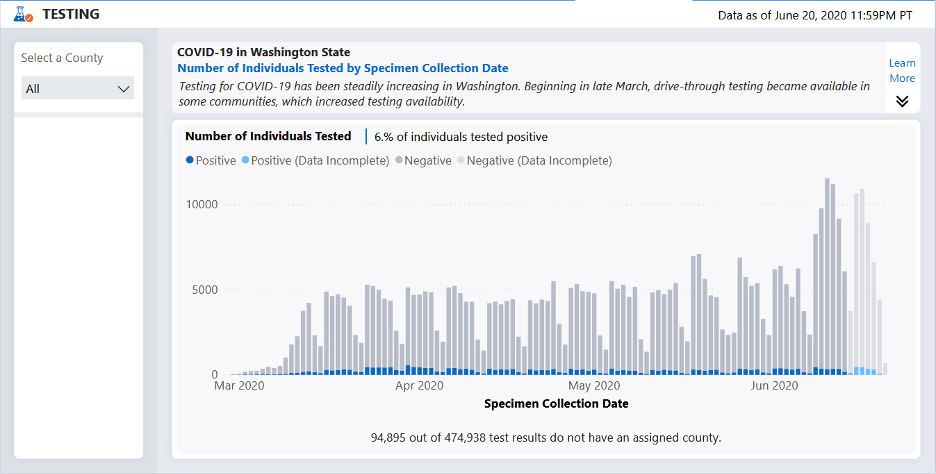 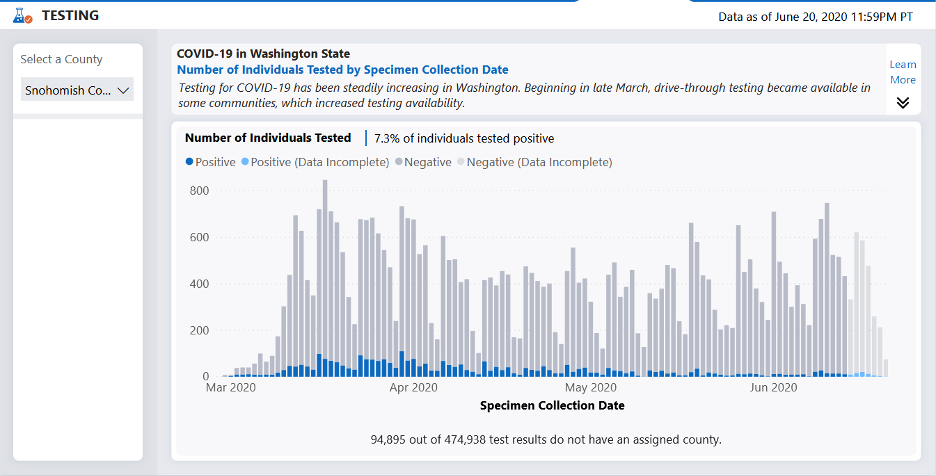 For more information and to view these charts and others  interactively, go to the Washington Department of Health COVID Data Dashboard here

Look for our report summarizing local data from the Snohomish Health District later in the week.