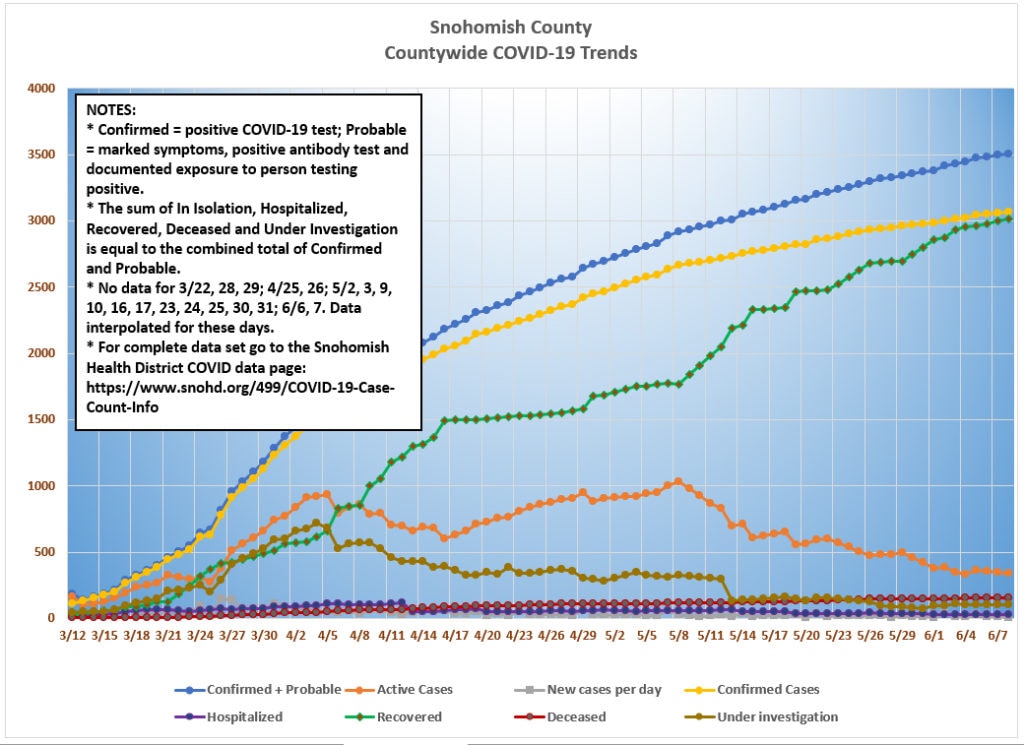 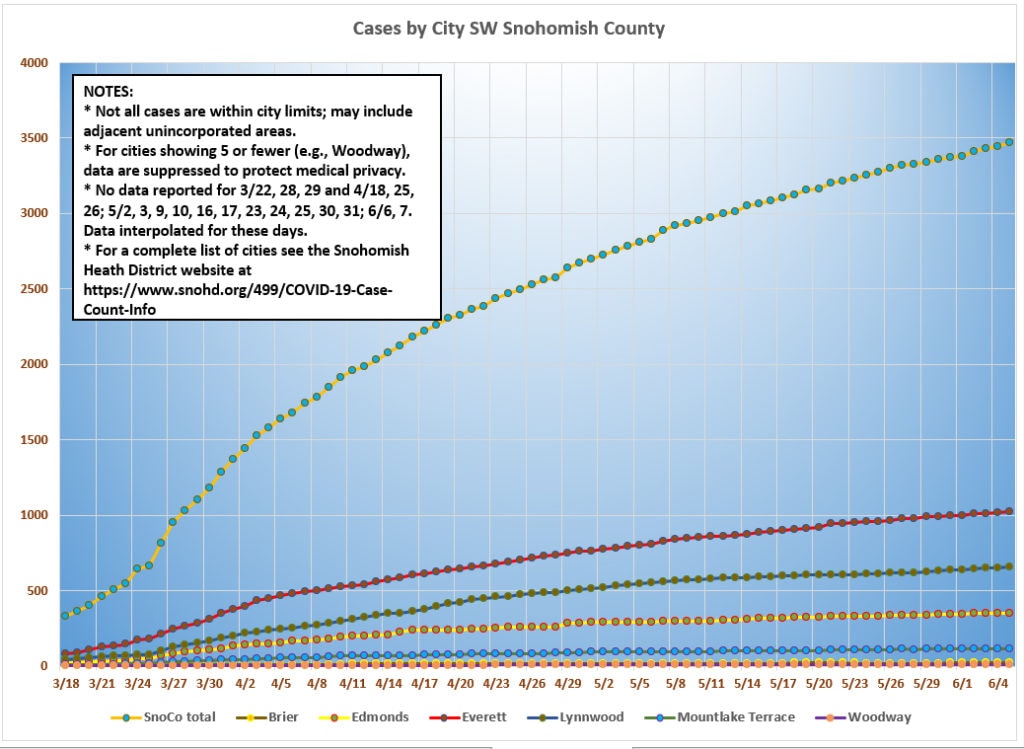 The Monday, June 8, data from the Snohomish Health District, traces a return to the slow but steady progress being made in our communities to slow the progress of COVID-19. Looking at the big-picture trends over the full reporting period (Countywide Trend chart), note that the total case counts (blue and yellow lines) continue to slowly flatten from the steep increases of late March and early April, a strong indication that our efforts to contain the spread by social distancing, wearing masks, avoiding large groups, etc. are having a positive effect. 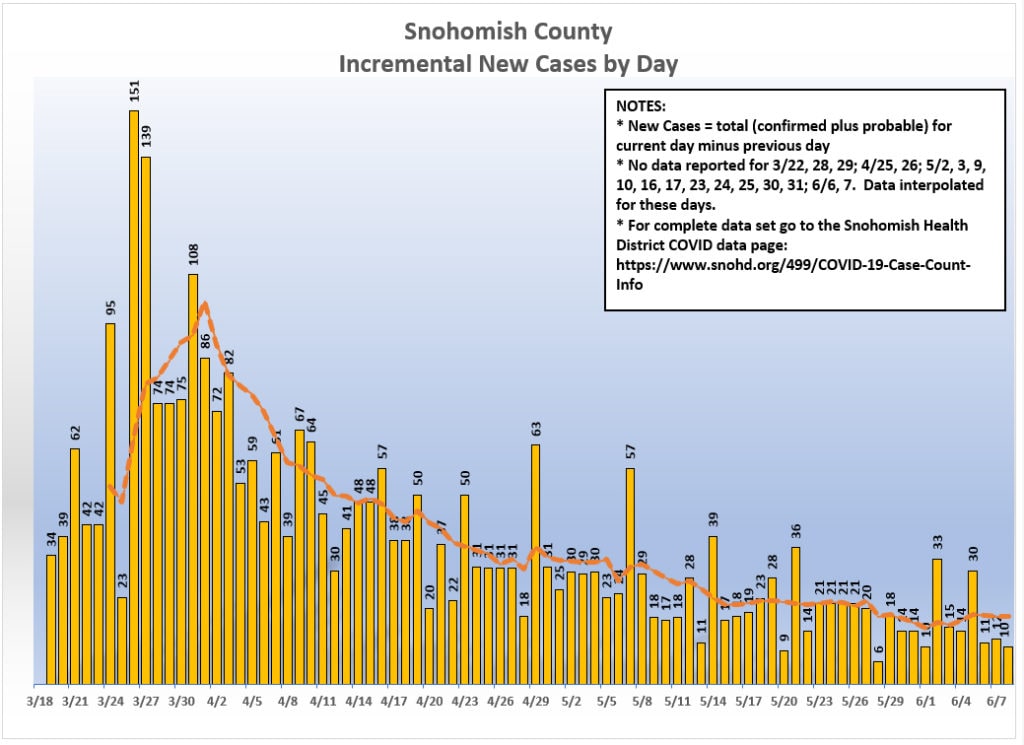 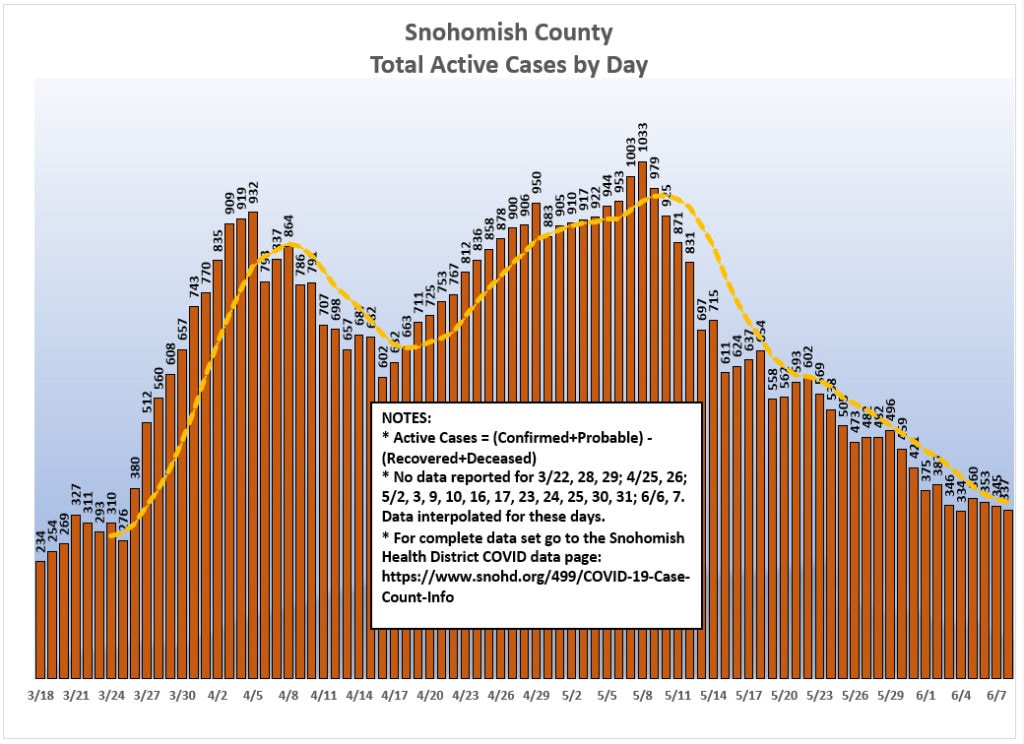 Incremental new cases (yellow chart), has dipped to 33 new cases over the past three days, in sharp contrast to the one-day spike of 30 new cases reported last Friday. Total Active Cases (red chart) has also dropped, with Monday’s data showing 23 fewer active cases than on Friday, bringing to 337 the total number of Snohomish County residents now down with the virus, the lowest count since before the steep rise in cases that began in late March. 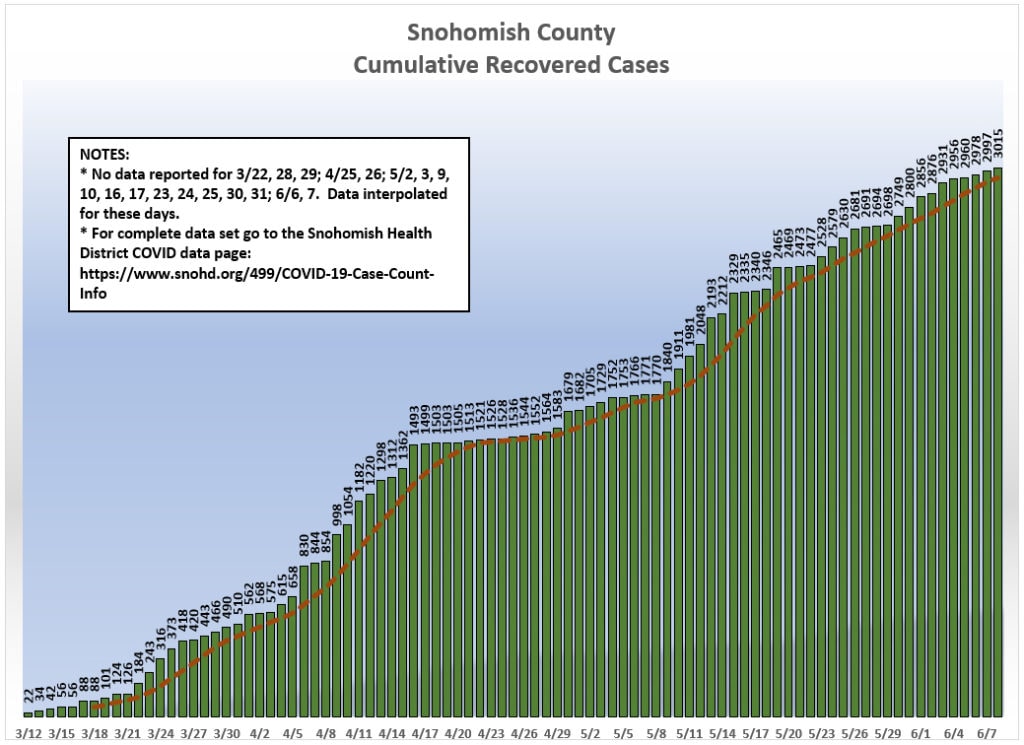 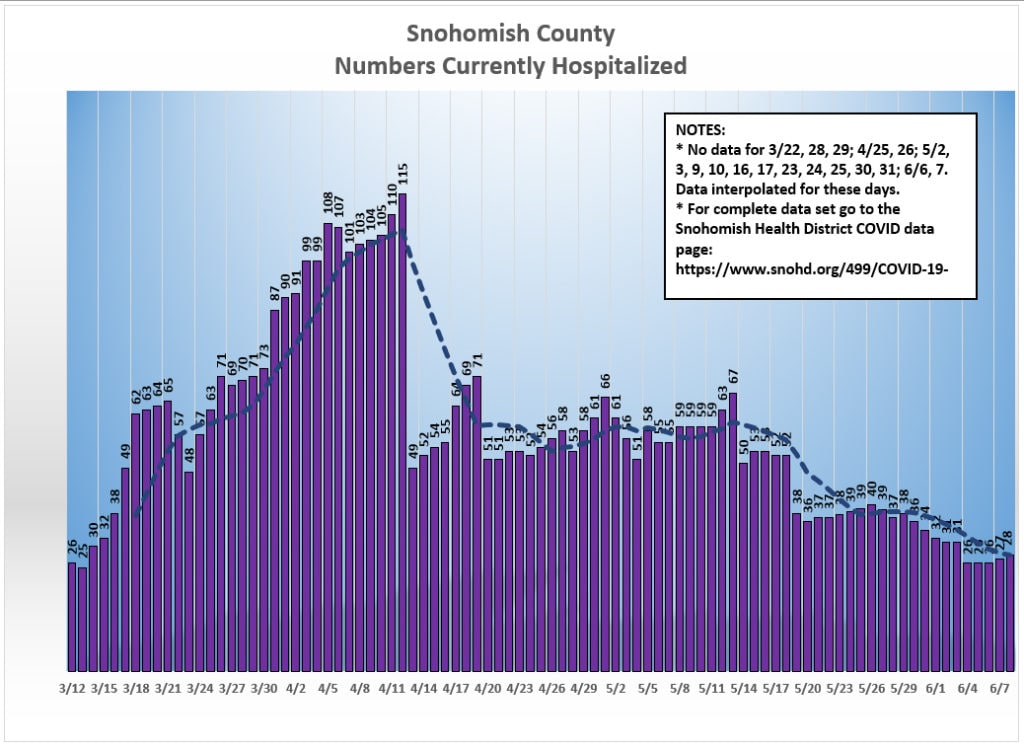 Number of recovered cases (green chart) rose by 75 over the weekend. As of Monday, 3,015 Snohomish County residents successfully recovered from the infection. Sunday’s hospital patient count (purple chart) is up two since Friday, with 28 now receiving hospital care for COVID-19. 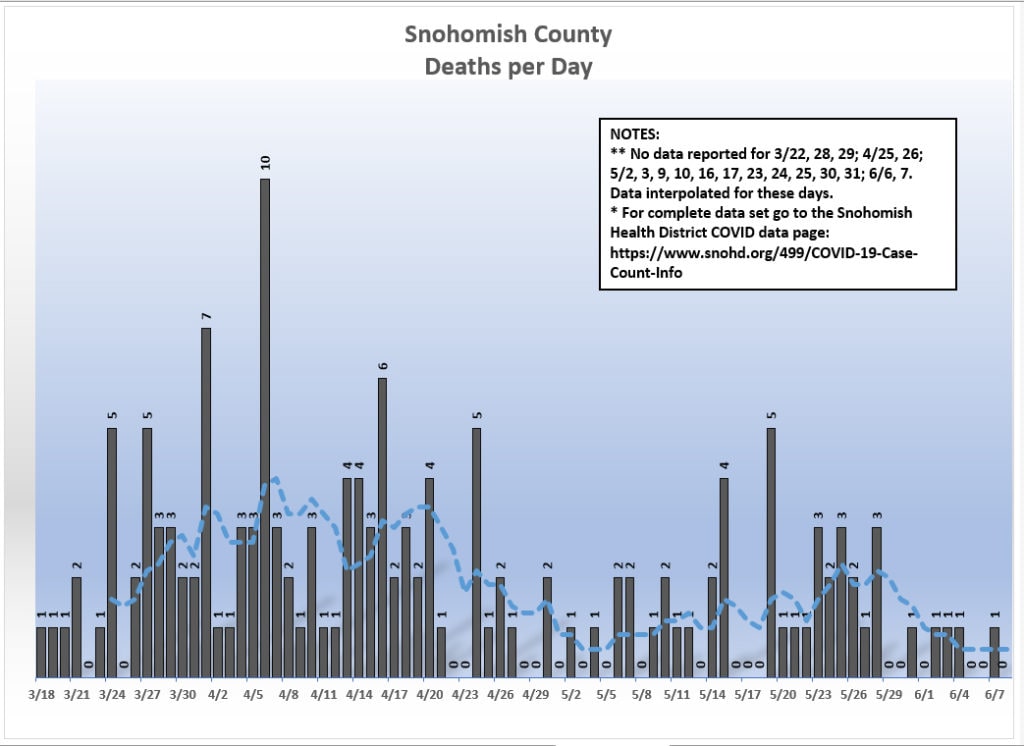 One additional COVID-related death (gray chart) was recorded over the weekend, bringing the total number of fatalities over the full reporting period to 153, or 4.36% of the total number infected (confirmed plus probable). 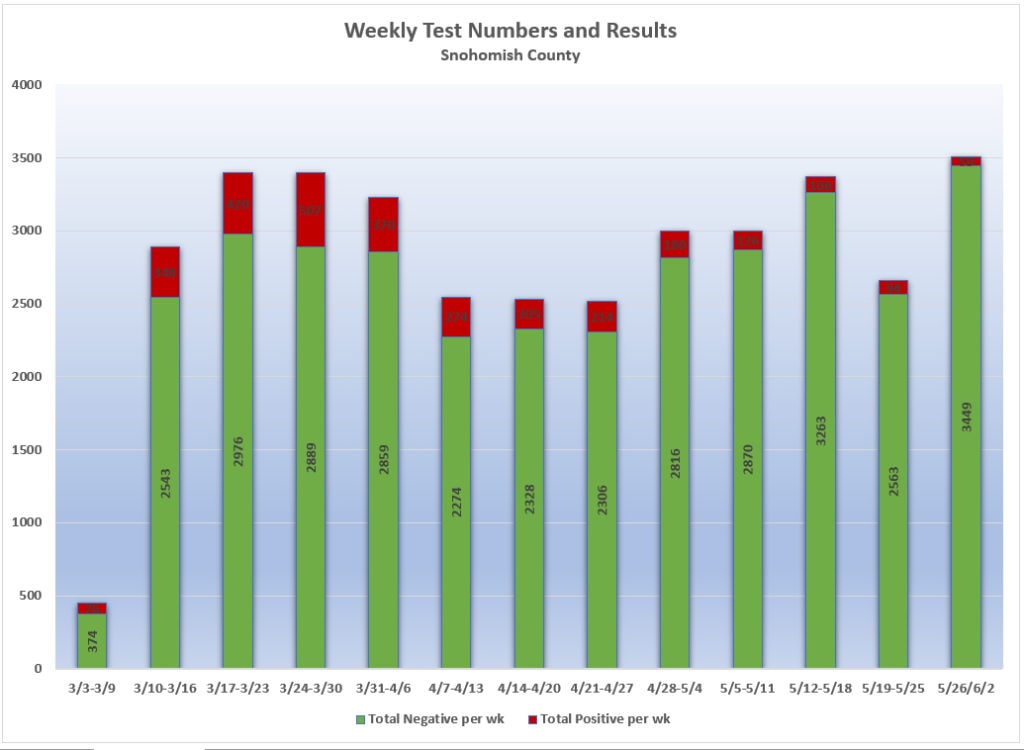 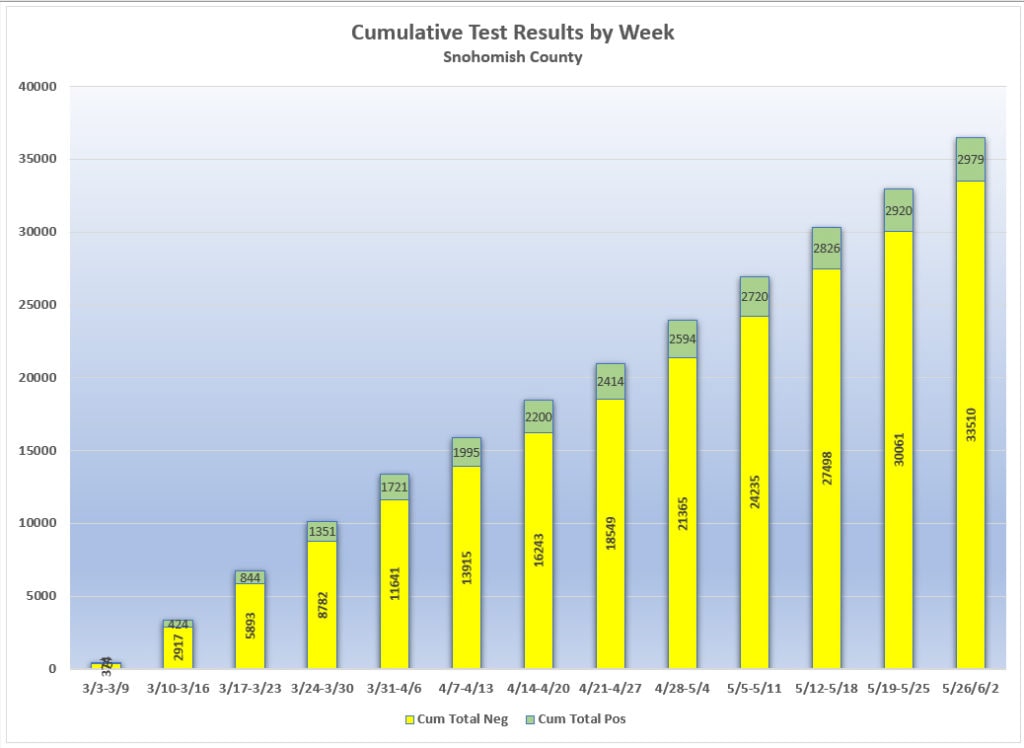 Testing activity in Snohomish County reached an all-time high over the past week (green bar chart), with more than 3,500 tests administered countywide between May 26 and June 2. Since testing began, the county has recorded 36,489 tests (4.4% of the total population of 822.083) of which 33,510 have tested negative (98.32%) and 2,979 positive (1.68%t). Note that the proportion of positive tests has been steadily dropping over the reporting period, yet another indicator that efforts at containment are having the desired effect and making it harder for the virus to find new victims.

On Monday the Snohomish Health District announced it testing schedule for the week of June 8:

More information including how to sign up is available here.

Look for our next COVID Update on Saturday, where we will update the Tuesday through Friday numbers.