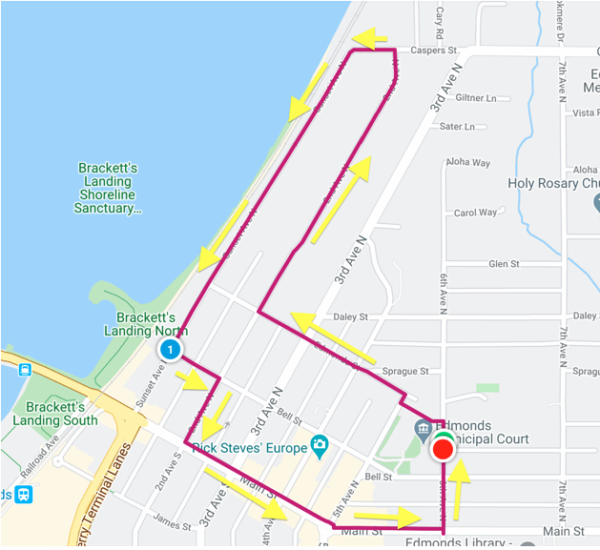 A silent Black Lives Matter march is being planned in Edmonds at 2 p.m. Friday, June 12, starting and ending at Civic Playfield.

According to the Facebook event listing, the march “will be in silence to honor and mourn the lives lost to police brutality and institutional racism.” Participants are encouraged to bring signs, maintain a 6 foot distance from others and wear a mask or other face covering.

Organizer Ilana Balint said the event, being led “by myself and a few Edmonds residents,” was scheduled to coincide with a Seattle Black Lives March Friday at the same time. However, it has received some pushback from local supporters of the Black Lives Matter movement, who questioned why Balint and other organizers did not first consult with Edmonds Black leaders before organizing it.

One of those raising that issue was Edmonds resident Alicia Crank, a Black woman who serves on the city’s Planning Board and also recently ran for Edmonds City Council. In a video posted to her Facebook page, Crank cited her recent “open letter to Edmonds leadership” (posted on My Edmonds News) reminding city leaders and members of the media to engage Black community members in issues about the Black community, stating “Nothing about us, without us.”

Noting that the Edmonds march organizer is not a Black person or person of color, Crank said that “the Black people in Black Lives Matter” were not included in the planning. “That’s a bit of a problem,” she said. “You can’t do things that are about us, without us.”

Crank said she won’t be at the Edmonds event, instead attending a Black Lives Matter march Friday in Everett. “I don’t wish it (the Edmonds march) to not be some level of success but I really hope that it becomes a teachable moment even if hurts for a little bit,” she said. “We need to do these things right. Including the ‘us’ — whether it’s persons of color or if it has something to do with the disability community or it’s to do with people who live in the Bowl that don’t want to see parts of Main Street shut down. You get equally upset if those that live down there or have businesses down there don’t have a voice in that decision-making. It’s that simple. It’s not racial.”

In response, Balint said the Edmonds march “was merely intended to be an extension of the silent march being organized in Seattle by Black Lives Matter King County and an opportunity for Edmonds residents to lend their voices to the chorus of voices happening across the state tomorrow. This was a very rapidly developing opportunity and there should have been greater consultation with local Black leaders. For that I am truly sorry. But, the cause is still the same.”