The end-of-week data from the Snohomish Health District and other sources show a continued resurgence of COVID-19 in our area accompanied by mostly level number of deaths and hospitalizations.

The latest numbers from the Washington Department of Health comparing Snohomish County with Washington state show that our county is registering higher than the state in percentages of both positive test results and deaths of confirmed COVID cases. 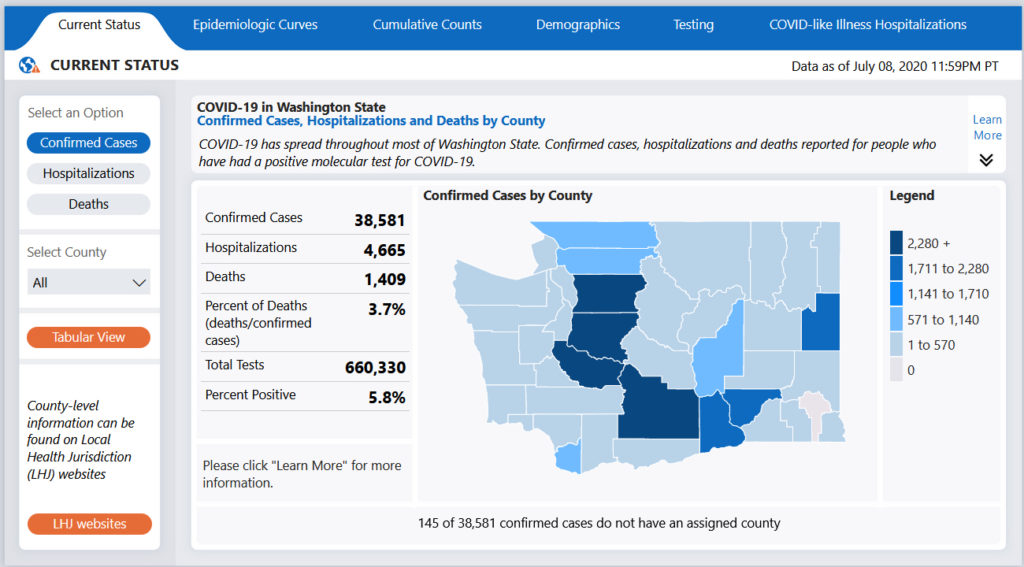 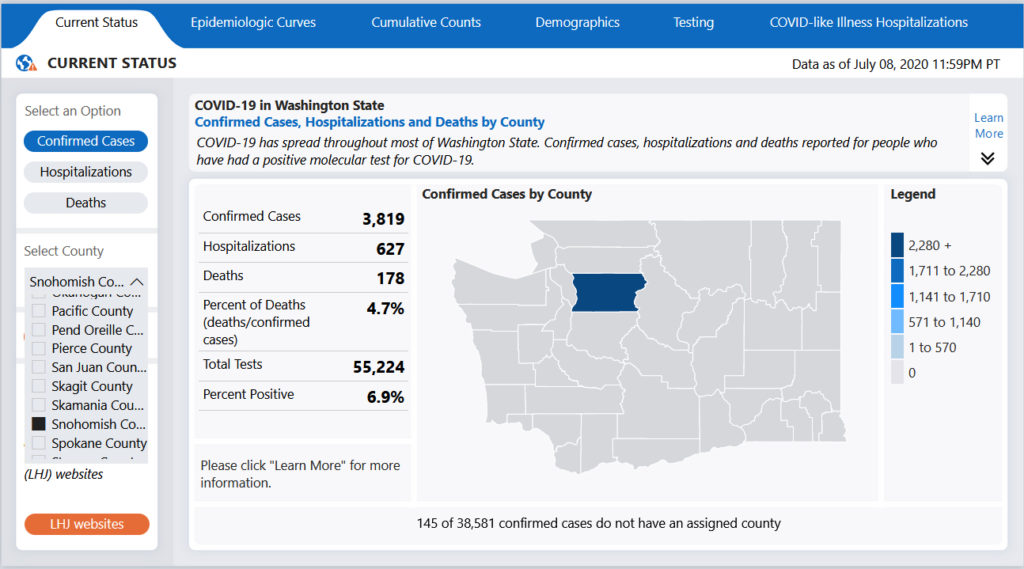 These numbers put us above the thresholds set by Gov. Inslee’s Safe Start levels in several categories, as the following table shows. 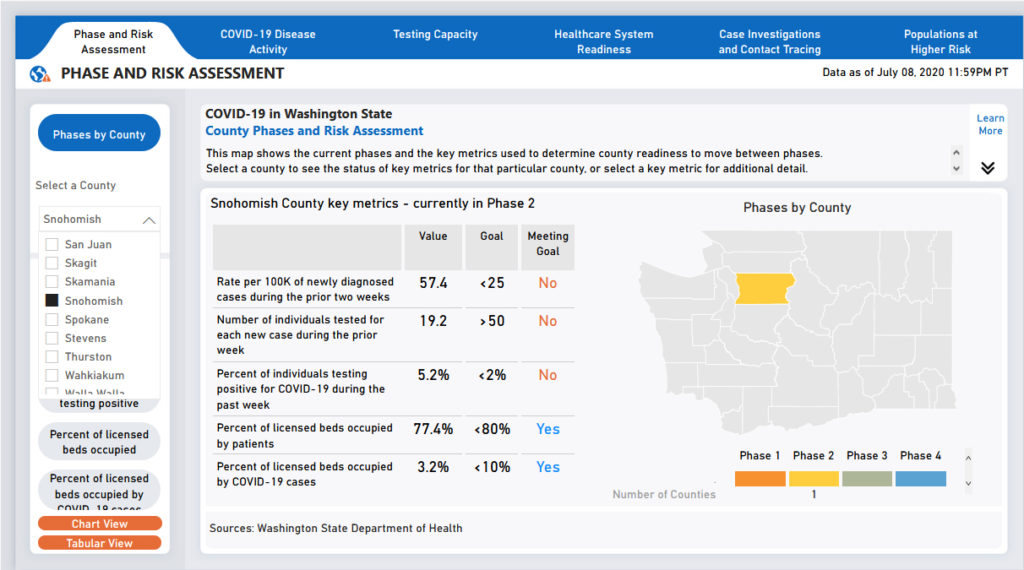 As the following graph further illustrates, we continue to fall further behind in the critical measure of the number of new cases per 100,000 over the previous two weeks. We have gone from meeting the target of 25 in early June to 57.4 as of July 8. 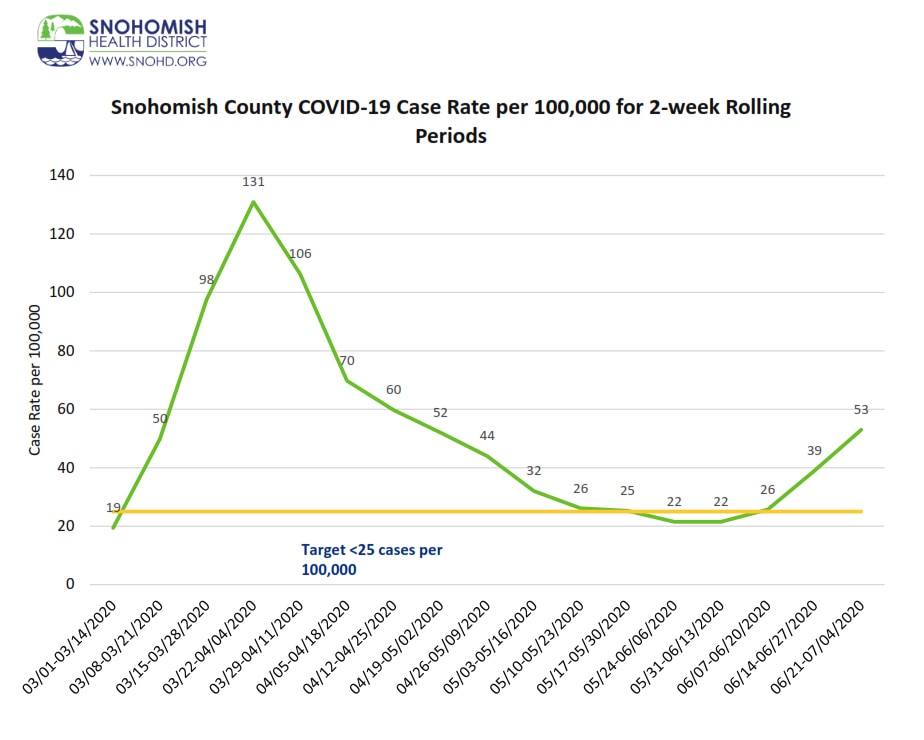 The Snohomish County cumulative and daily case counts as reported by the Snohomish Health District also continue their upward trend, although local numbers have yet to catch up with the highs of late March and early April. 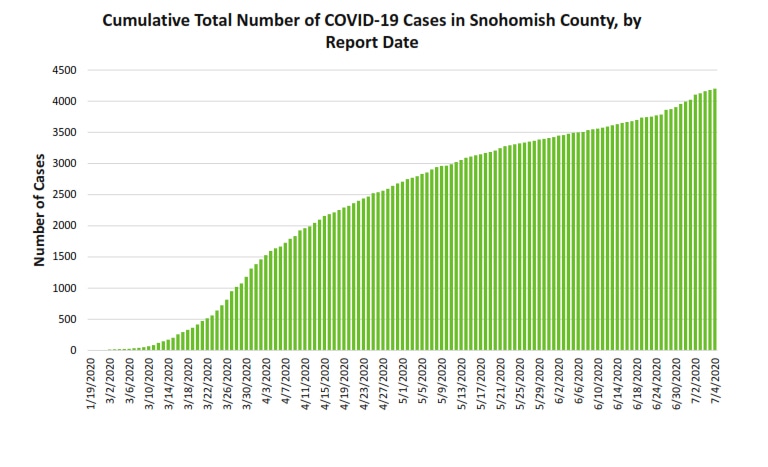 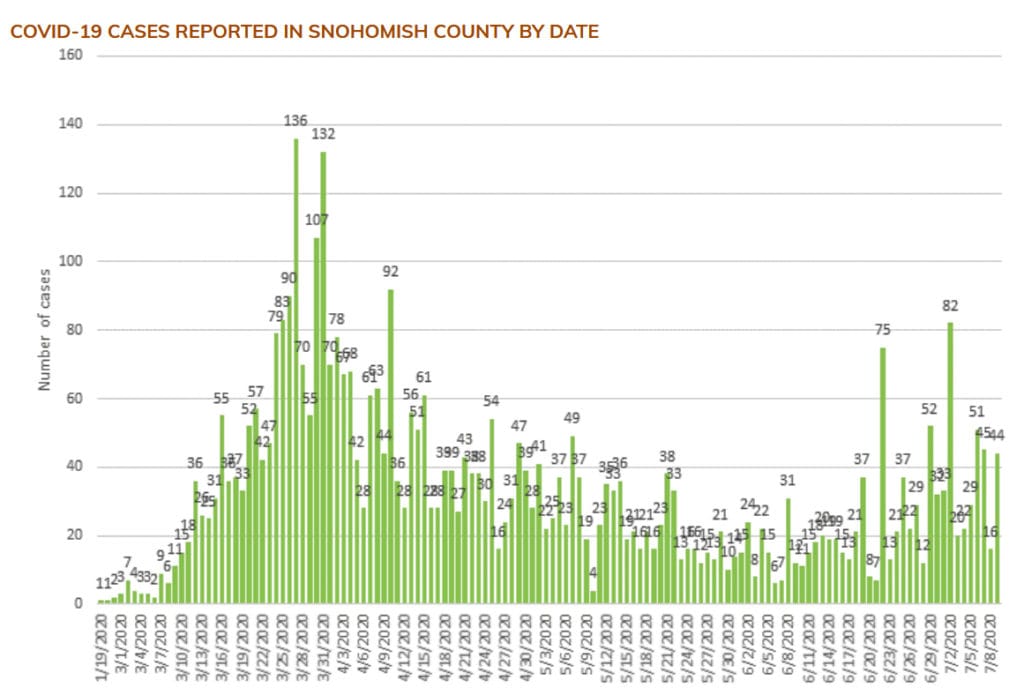 This is in marked contrast to the overall state numbers, which according to the latest report from Johns Hopkins shows Washington state setting new highs, most recently reporting 633 new cases in a single day, exceeding by more than 100 the highest count during the surge of early April. 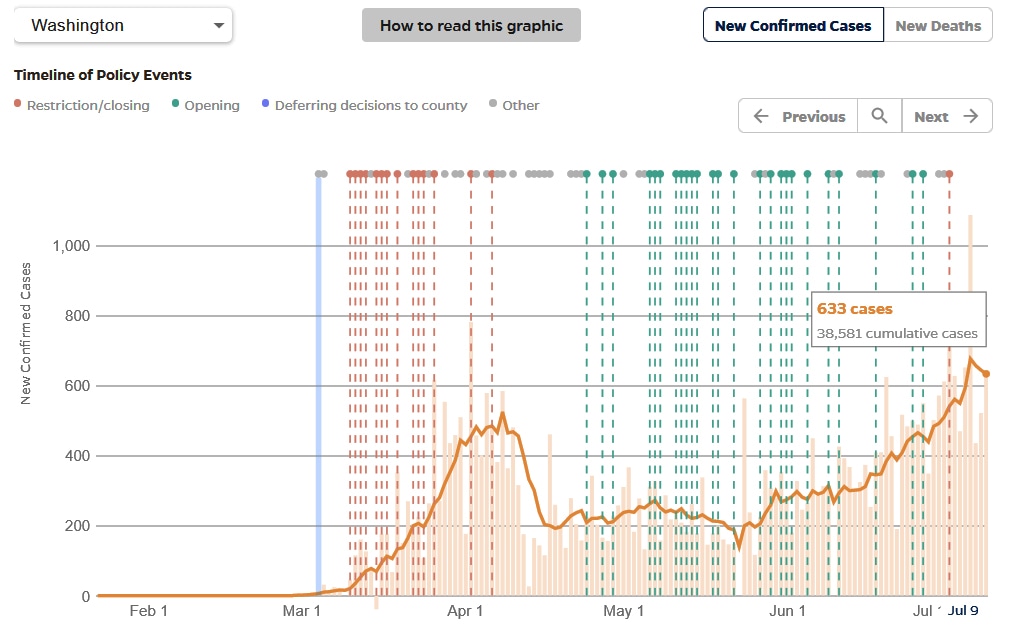 Despite the marked upsurge in new cases, death numbers are remaining relatively constant in both the county and the state, as the following two charts from the Snohomish Health District and Johns Hopkins illustrate. 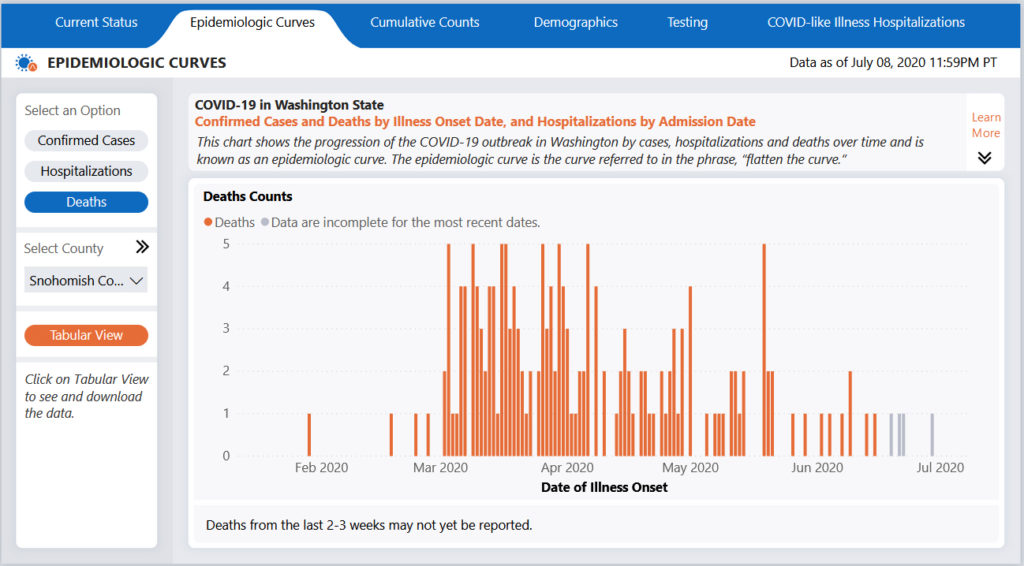 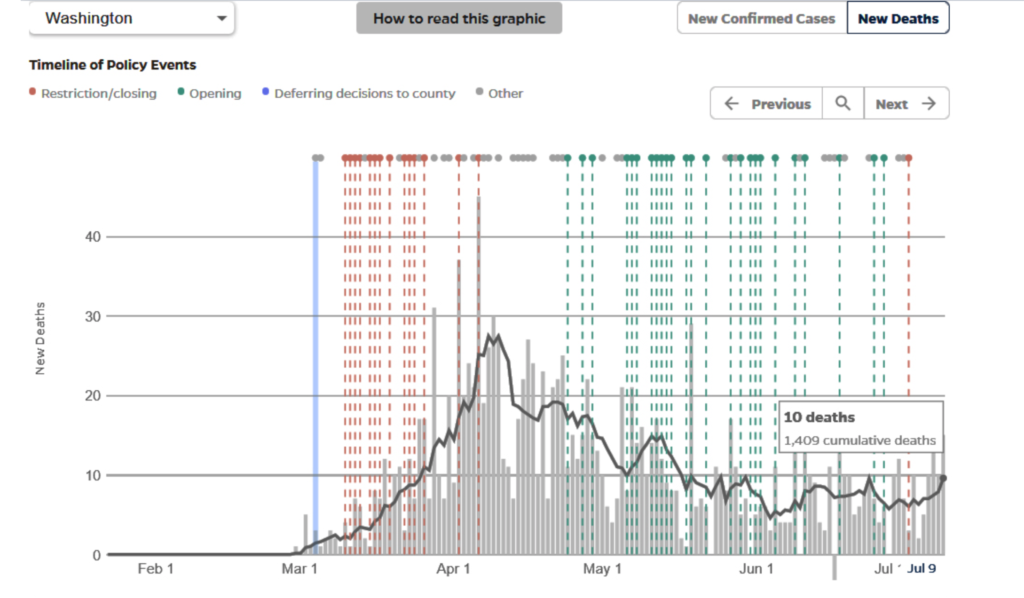 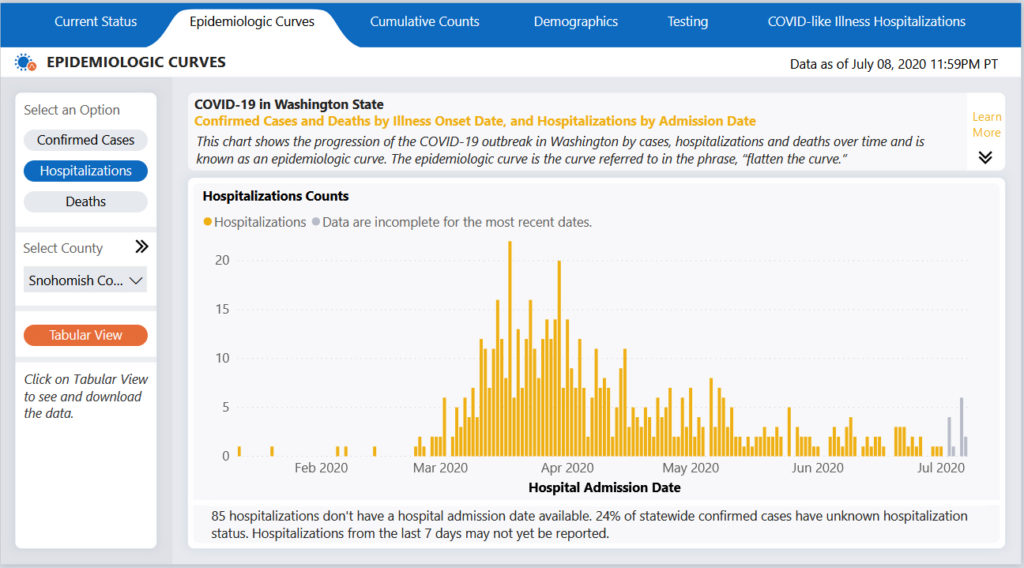 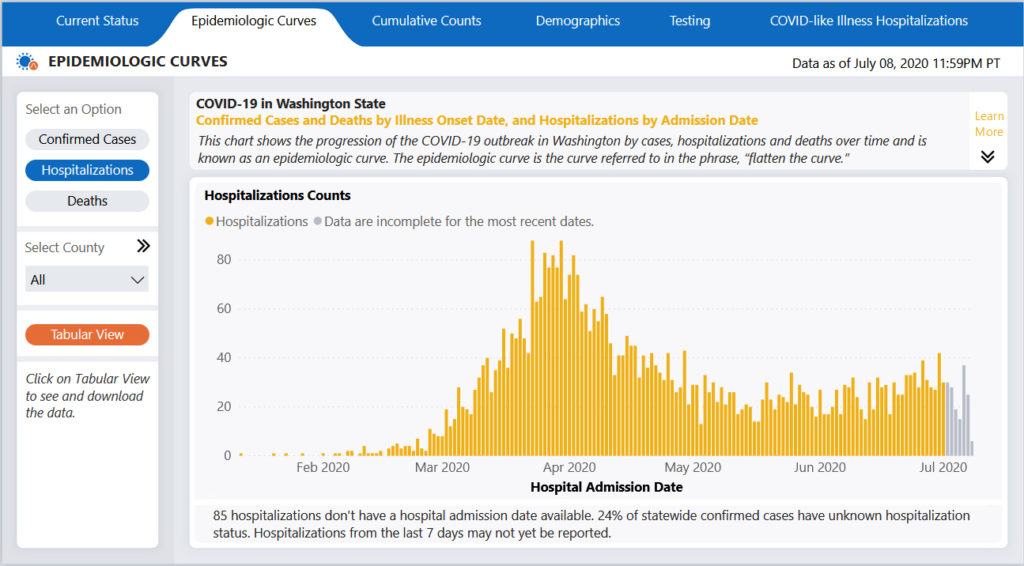 Demographic data also continue to illustrate the increased susceptibility of older age groups to the worst effects of the virus, and the upward trend in infections among younger people, suggesting that younger patients have better resistance, resulting in fewer deaths and hospitalizations. 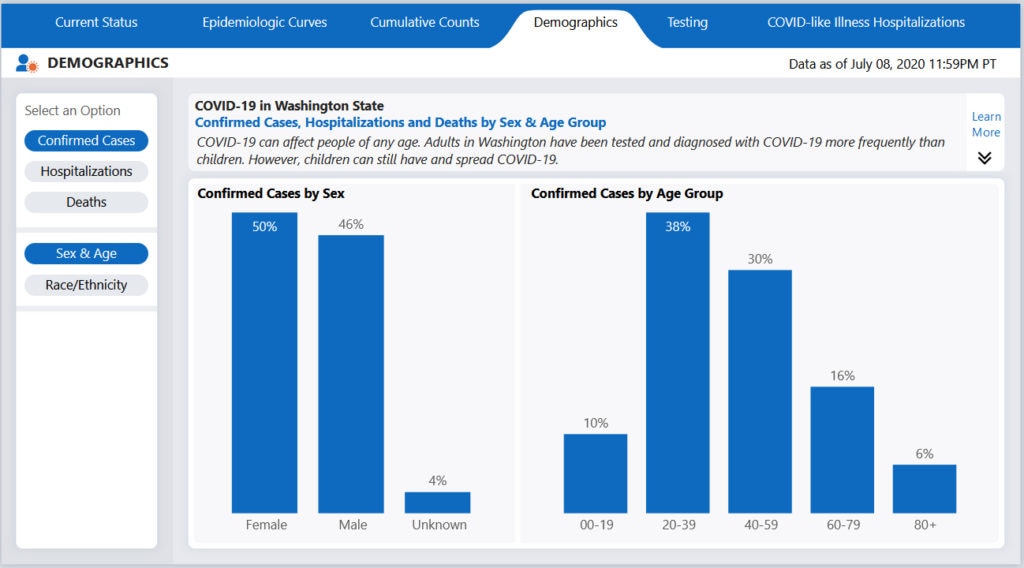 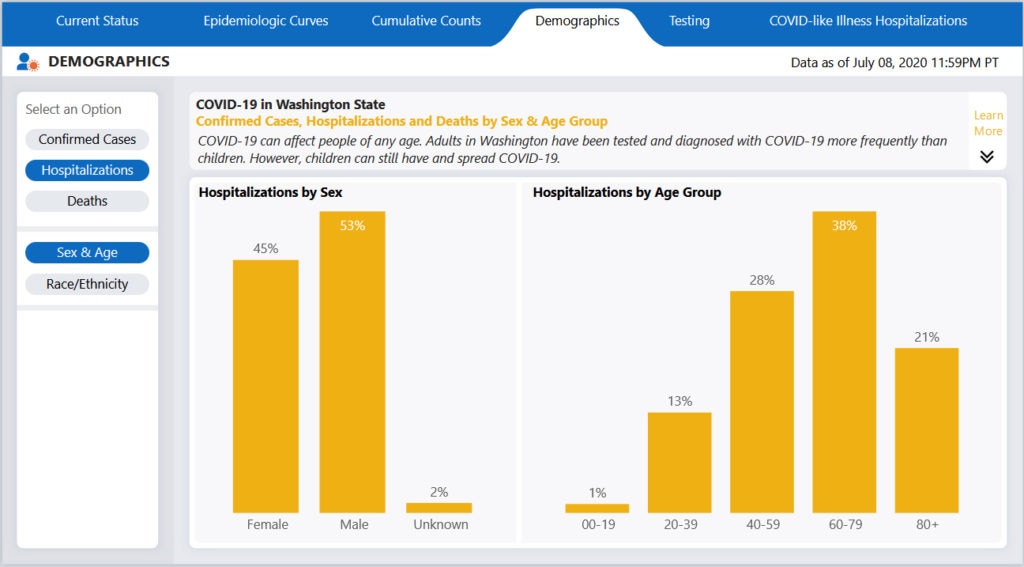 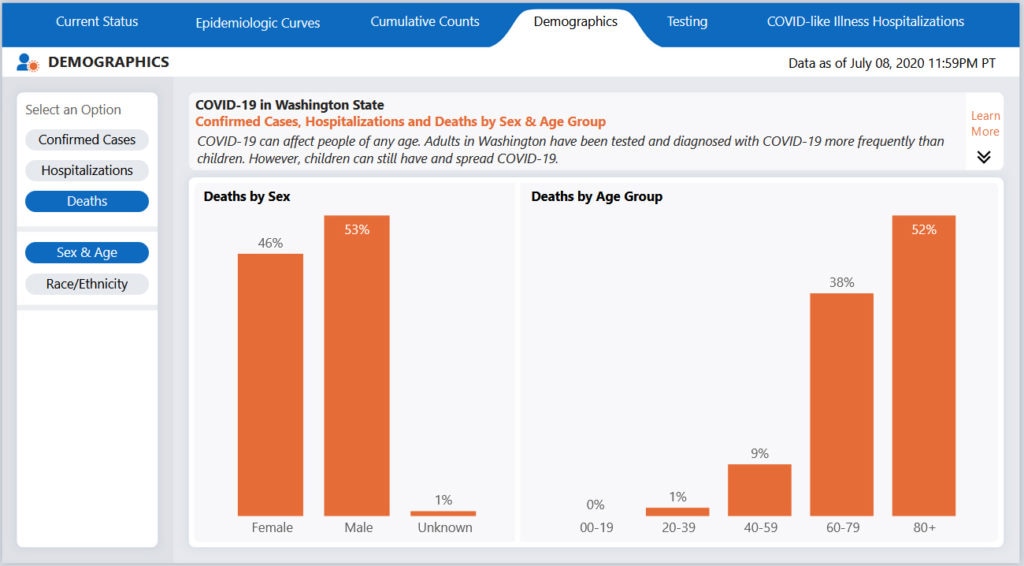 Testing in Snohomish County continues, with numbers of positive results backing off from the previous week.

The uptick in local positive test results is also illustrated in the following weekly and cumulative testing bar charts. 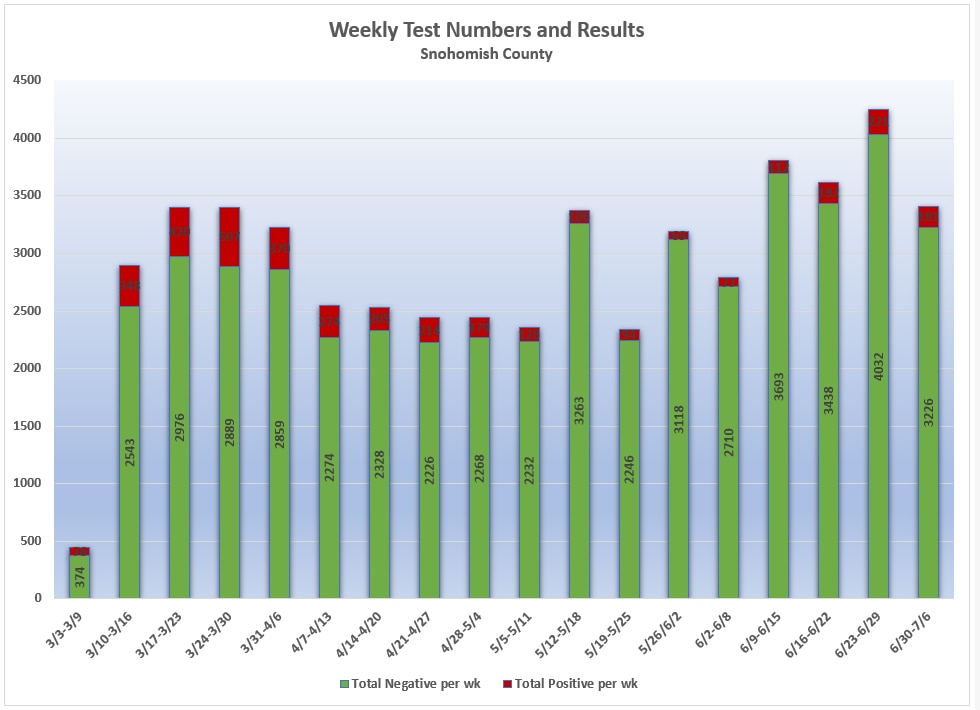 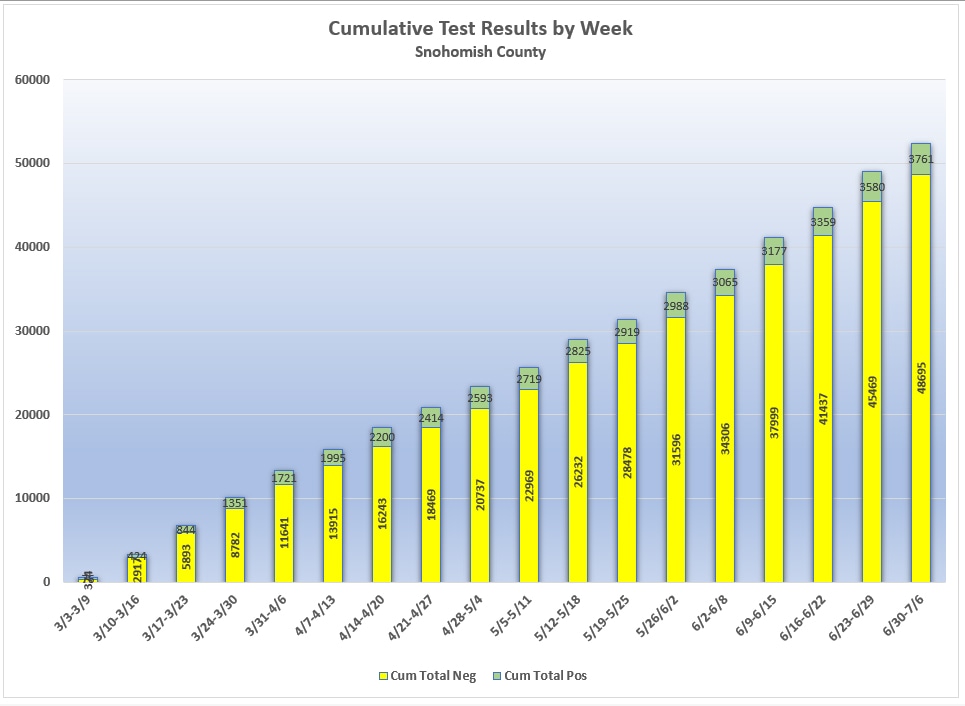 In addition to testing, enhanced contact tracing efforts are having an effect, with more cases being traced to their source and fewer relegated to the catch-all category of community contact. The following table shows close contact to be predominant mode of exposure in our community. Examples of this include attending parties or other gatherings that bring people together in groups and/or direct contact with a person testing positive. This strongly suggests that the virus is primarily being transmitted from person to person and underscores the value of the experts’ advice to wear masks, maintain social distance, and avoid places where people gather.

The local numbers as extracted from the July 10 Snohomish Health District report:

Interested readers will find a wealth of additional information from these sources.