Everyone loves a beach town in summer. Each town has a different personality, although all specialize in food, fun, sand, and sunburn. Last summer we enjoyed two beach towns, both on the North Sea, but completely different from Edmonds and from each other. 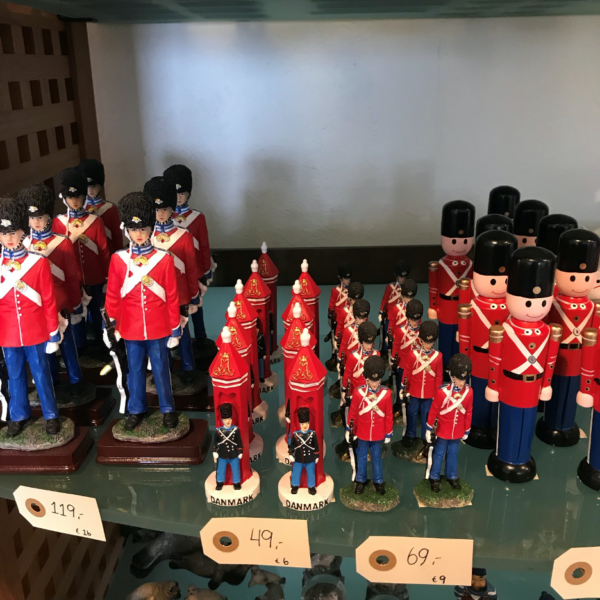 The first town was Skagen, strategically placed on the sandy tip of Denmark where the channels from the North Sea (Skagrrak) and the Kattegat, leading to the Baltic Sea, meet. It’s been a fishing and shipping town for some 600 years. There’s still a large commercial fishing industry as the containers of colorful nets demonstrate. 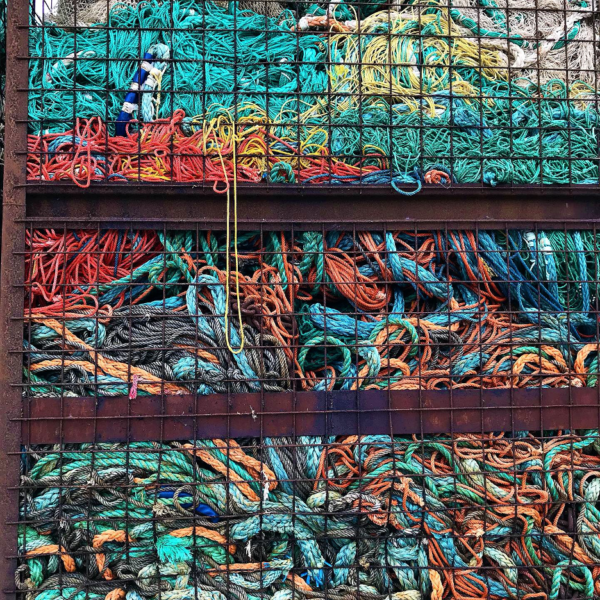 When summer comes, two million tourists flock to enjoy the sandy scenery along with high-end shopping, seafood, and The Skagens Museum. 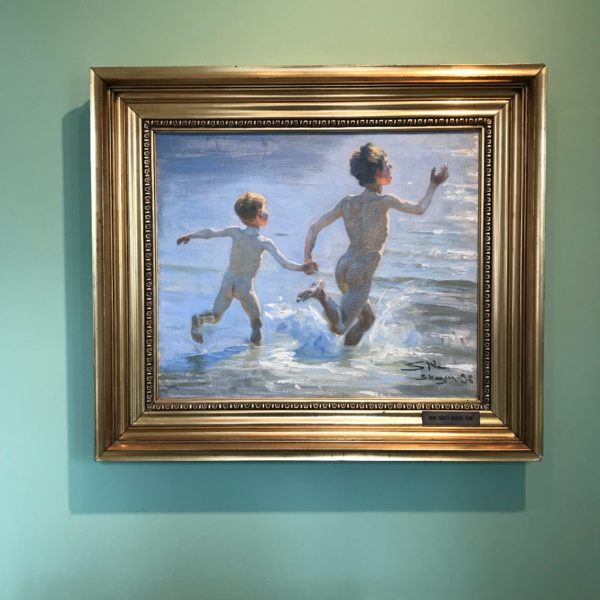 The summer solstice is celebrated by lighting The Bascule Light with its open fire basket. It looks like a medieval catapult but the design was used in several locations as a lighthouse around Denmark as early as the 16th Century. 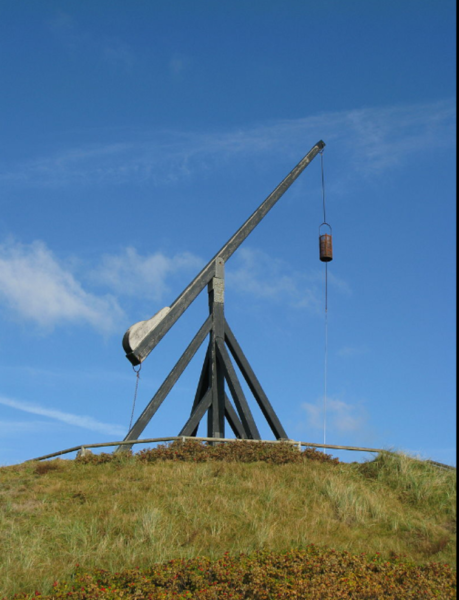 The town was most definitely off the beaten path until around 1870. Despite no harbor or railroad, young, less-established artists began to arrive after word got around at the Royal Academy of Art in Copenhagen that the locals would be happy to model for modest fees and that that the location was especially scenic and light-filled. The resulting artists’ colony eventually attracted authors, composers, musicians and others involved in the arts.

We arrived late May, and contrary to the town known as the sunniest place in Denmark, it was overcast and cool. No matter. The town center was crowded with early holiday makers all shopping and eating, and except for the modern clothing, it was easy to imagine the previous artists strolling the streets lined with picturesque red-roofed yellow or red-brick houses surrounded by roses, hydrangeas, and hollyhocks straight out of a fairytale. 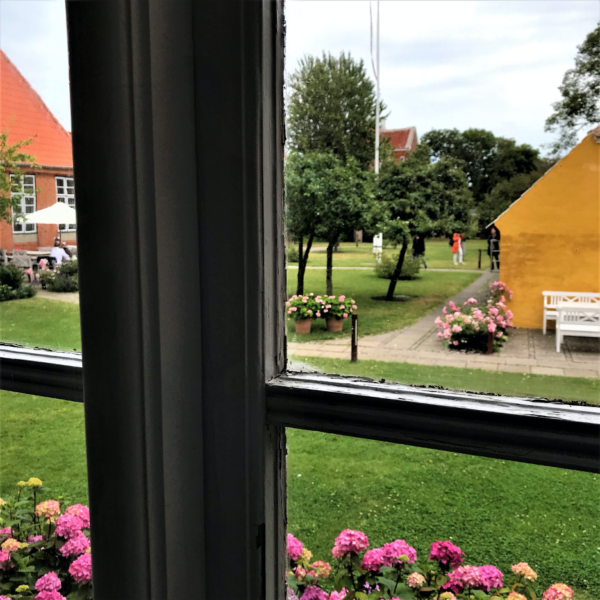 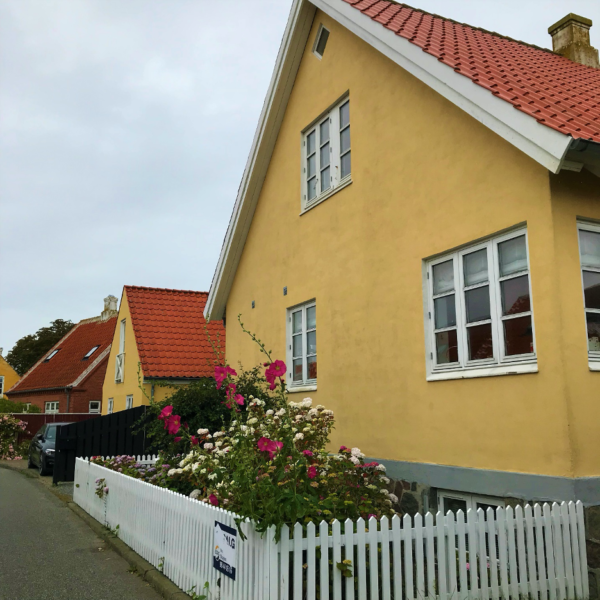 After Danish pastry (what else?), we set off window-shopping our way to the museum. If you are in the market for Georg Jensen silver, Skagen watches, Danish-design clothing and home décor, Scandinavian style, this is the place to be. 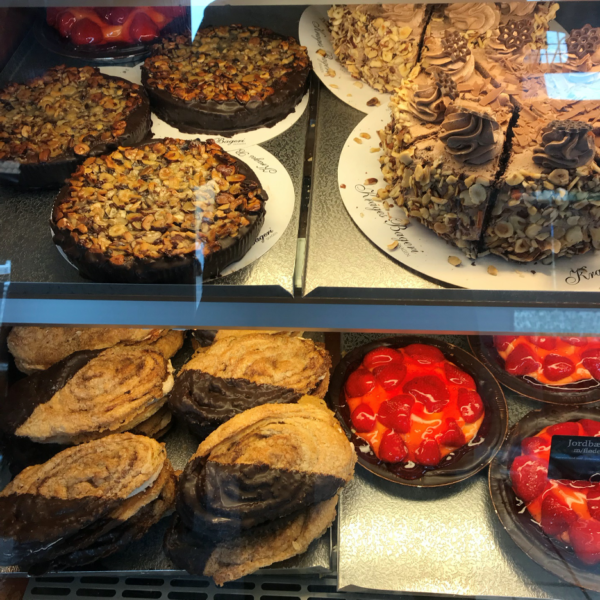 The museum was one of the loveliest I’ve ever had the pleasure of visiting – small rooms displaying a collection of work by the most well-known colony painters. Many of the paintings are in the light-filled Impressionist style and feature quiet domestic scenes. Others, darker, depict the harsh life of the local fishermen putting to sea in storms to earn their livelihood and sometimes not returning. 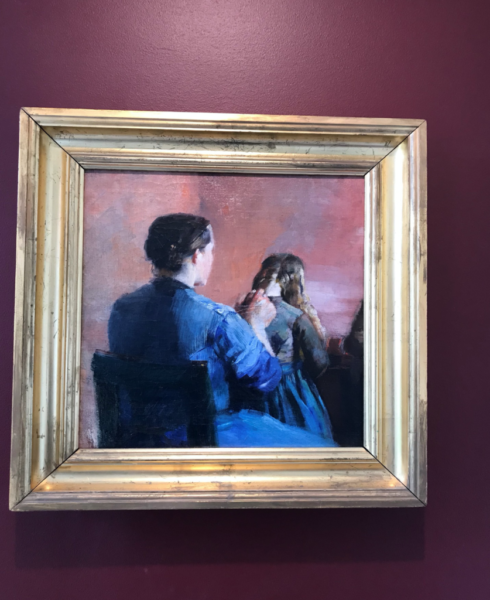 We lingered long in town and then returned to the easy life aboard our cruise ship, no need to work for our fish dinner. 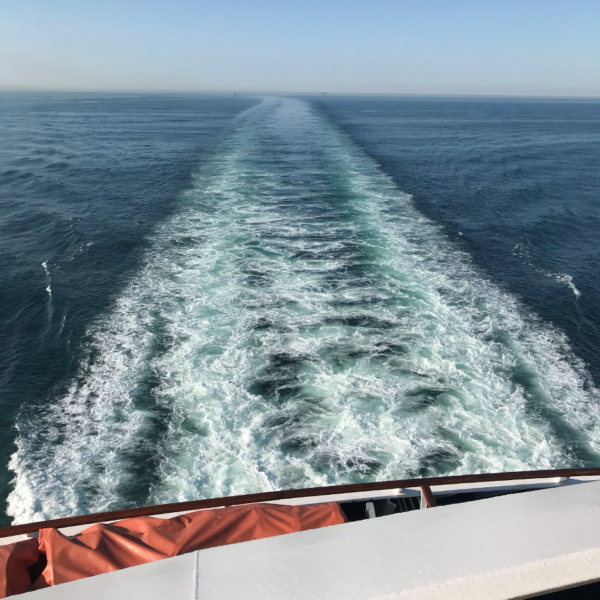 We visited Skagen on purpose; we ended up in Blankenberge by chance. A terrific heatwave put an end to our plans to tour several of the World War One battlefields in the nearby Flanders Fields made so sadly famous by John McCrae’s poem beginning “In Flanders Fields, the poppies blow besides the crosses row on row.” Concerned that a day in the sun was a sure recipe for heatstroke, we cancelled the tour and headed for the small beach town, a place we’d never heard of but everyone else in this part of Belgium surely had. The roads were lined with parked cars for miles around and the town was overflowing with red-faced citizens.

The town is exactly what I’d pictured a holiday town on the North Sea: turn of the last century Belle Epoque buildings, loads of hotels including high rises lining the sea wall, trinket shops. 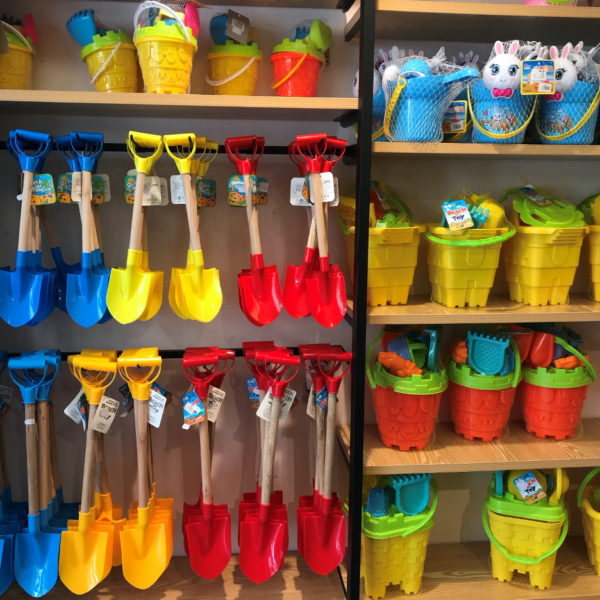 And the packed, sweaty humanity. There was no place to sit unless we wanted to pause in the empty main plaza where the pavement was fry-an-egg hot. 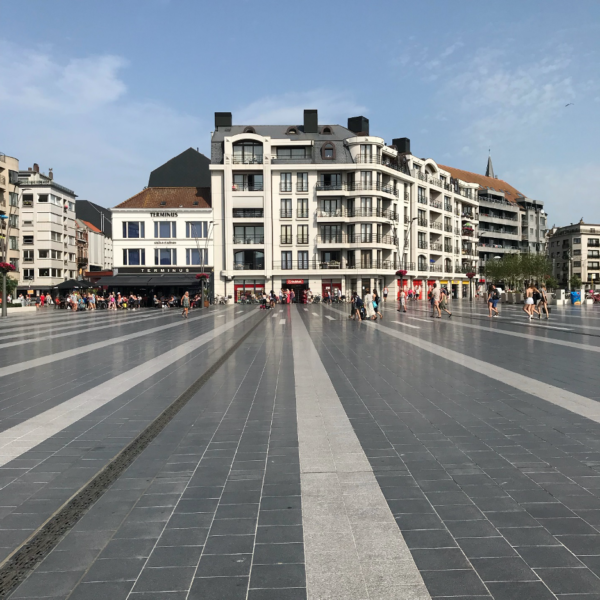 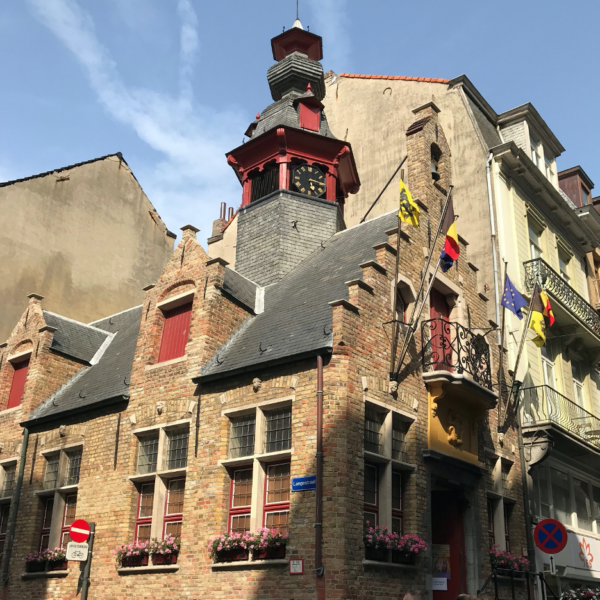 We were swept along the main drag under the burning sun toward a set of steps leading to a sea wall that then led down to a beach. At the top of the steps was a display of the town’s history – its claim to fame is that the hapless Archduke Franz Ferdinand of Austria and his wife Sophie, Duchess of Hohenberg, were regular guests in a special wing of the Grand Hotel des Bains et des Families pre-World War One. They were planning to travel again to Blankenberge after their last official engagement before the summer holiday: the famous visit to Sarajevo in 1914. We all know how that went when their assassination set off the War to End All Wars, the end of their empire as well as those of the Hohenzollern, Romanoff and Ottoman, and the uncounted death of millions.

Beach-side, the tide was out and some determined sun-bathers braved the hot sands, surely to become lobster red by afternoon. We backed off to search for shade. No luck with every bar and restaurant crammed with patrons none of whom gave any sign of leaving. 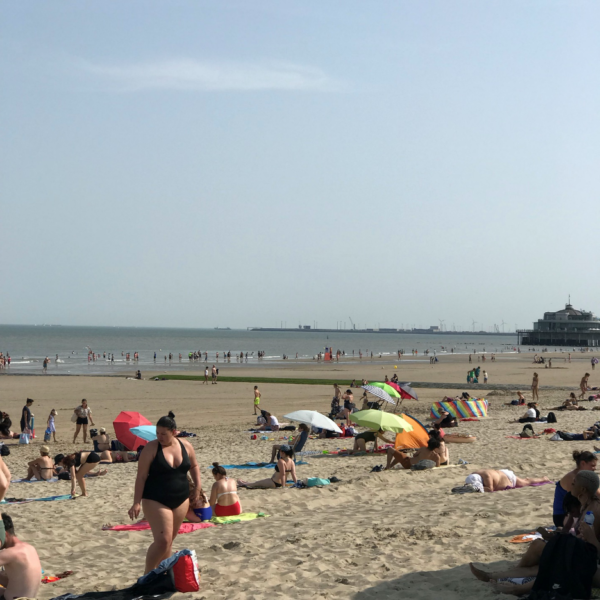 So there wasn’t a spot to eat the Belgium national dish, Moules and Pomme Frites (mussels and French fries) along with a Belgium beer. But, happily, we found a shop with Belgium’s other famous product: chocolates. And, oh the heaven, it was air conditioned! We prolonged our shopping by trying samples before we bought several boxes for friends (and us).

Back out in the heat, we found one more delight: The Renaissance church of Sint Antoniuskerk set in a leafy park. 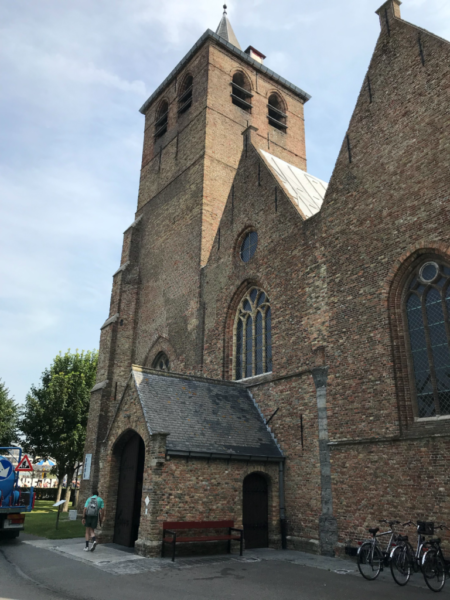 The interior was cool, the light filtered, the artwork beautiful. The ambience gave no indication of its fraught history: a medieval building later heavily damaged in the interminable Wars of Religion, and finally restored in 1642. The reddish-brick building looked as if it would easily fit in a landscape painting from the Dutch Golden Age (despite it being in the next country). 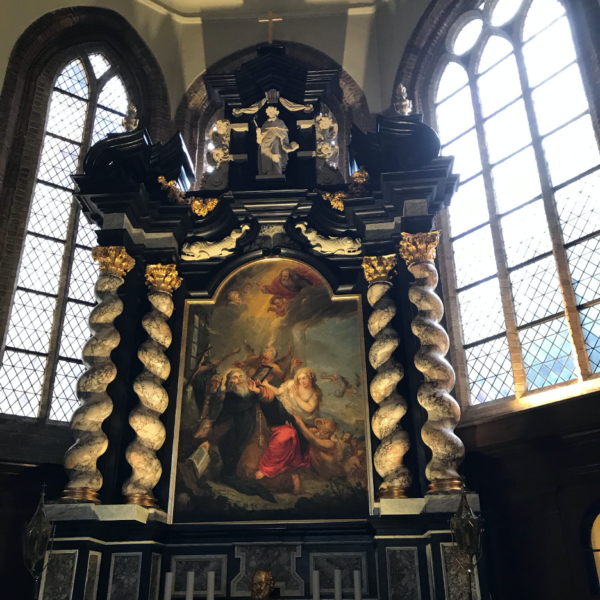 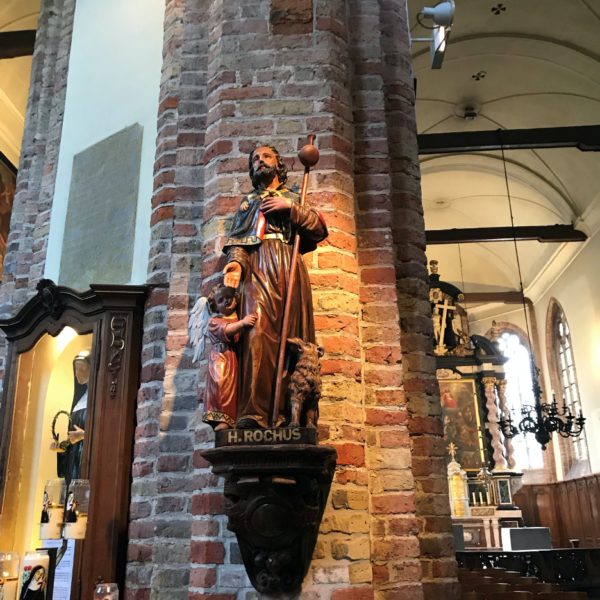 It served as our place of respite until we could dare to carry our precious chocolates back into the sweltering heat to find a bus back to the gigantic harbor of Zeebrugge.

The harbor is one of the largest ports in Europe and is filled with cargo ships moving through a labyrinth of canals and passages to berth or head into the English Channel and onward to the world. Our white ship with the fuel barge cozied nearby looked tiny among the behemoths piled high with containers, or filled with bulk cargo and new vehicles, but it had cool showers and ice-cold martinis before dinner on deck. 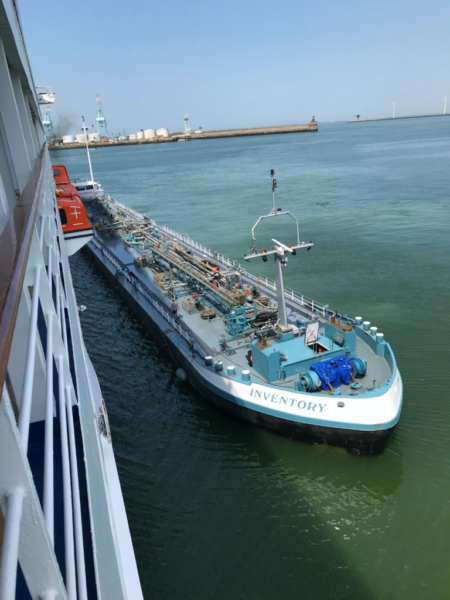 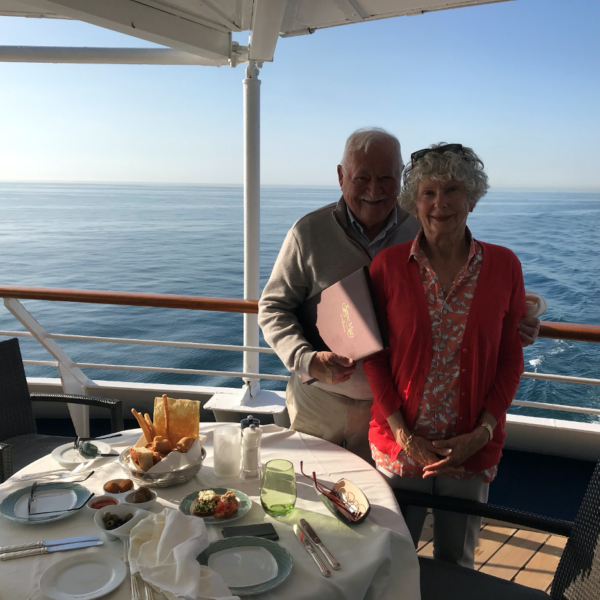 All photos with exception noted below are copyright Judith Works

Bascule Light is by Matthias Schalk from Wikipedia CC BY – SA 3.0