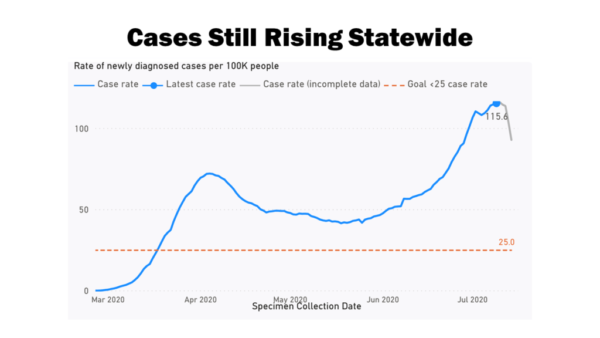 As cases of COVID-19 continue to increase across the state, Gov. Jay Inslee and Sec. of Health John Wiesman Thursday announced a new limit on social gatherings and a ban on live entertainment across the state.

“The steps are necessary to slow down the spread of COVID-19. The unfortunate truth is that we can’t let our guard down, even as we engage in more activities,” Inslee said during a press conference Thursday. “As we inch closer to the fall, we are already on an unsustainable path in the spread of this virus. We have to change to save lives and to avoid turning the dial back further on the activities we enjoy.”

Under the new Safe Start phase limits, the number of individuals allowed in social gatherings during Phase 3 will be reduced from 50 people to 10 people. Counties in Phase 2 may continue to have social gatherings of up to five people.

These restrictions apply only to social gatherings, not business operations operating legally under the Safe Start guidance. Funerals, weddings and religious activities are exempt from Thursday’s restrictions.

Additionally, the governor and secretary announced a prohibition on all live entertainment, indoor or outdoor, statewide. This includes drive-in concerts, comedy clubs and music in restaurants.

Some gatherings that may be limited by the announced change in group size include:

-Gatherings on beaches and in parks

The announcement comes after the state saw the highest single-day increase in cases since the pandemic began back in January. The state Department of Health reported 1,292 new cases Thursday out of the 19,381 cumulative cases statewide.

The seven-day rolling average of new cases per day, from June 26 to July 2, was 629 cases per day. This is also the highest since the pandemic began.

Local health jurisdictions are also beginning to see what they believe as the first signs of an uptick in cases caused by Fourth of July celebrations.

Recent evidence suggests that the virus is most easily and commonly spread through face-to-face interactions, such as gatherings in the home, at social gatherings and in work settings.

“How individuals respond to this crisis will determine what happens to all of us combined. Masking and social distancing — in tandem — are the best defenses against this virus,” Inslee said.

“The numbers that we are seeing reflect the interdependence we have on one another,” Wiesman said. “Everything that we do as individuals impacts our ability to move forward as a state. We can’t go safely forward until we all do our part.”

The governor noted that if Washingtonians continue failing to adhere to mask-wearing and social distancing, Thursday’s announcement may be a forerunner to more rollbacks.