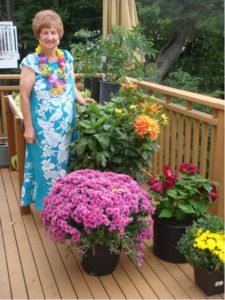 Lillian Passage passed away peacefully on June 9, 2020 in Phoenix, Ariz. from a lengthy illness. She was 89.

Lillian was born in Clifton, New Jersey in 1930, the oldest child of Peter and Suzie Gula, (Lazorchak). The young family soon moved to the small coal mining town of Heilwood, Penn., where her father worked in the coal mines while her mother raised eight children. Lillian’s ancestry is Slovak/Czechoslovakian and her family worshiped at the Greek Orthodox Church.

Growing up in the Great Depression, Lillian never considered herself poor or without. She persevered and never dwelled on the negative and instead adopted a positive attitude in life. Lillian learned many guiding principles, such as “If you can’t say anything nice, don’t say anything at all,” “You can always find something positive about someone,” “If you are going to do something, do it right,” that she practiced throughout her life.

Lillian graduated from Pine Township High School in Heilwood in 1948. Her father unexpectedly died from black lung at age 46 a few years later. Lillian met and was swept off her feet by Gerard “Jerry” Passage. The two married in 1951 and settled in Phoenix, Ariz. Lillian was a loving and wonderful wife for Jerry, who passed in 1994 from lung cancer at age 69.

Lillian and Jerry had three kids, Diane (1955), Raymond (1958) and Kathleen (1962). Despite working full-time jobs outside of the home and raising her children, she never complained or rarely asked for help. Lillian cherished her family and often put their needs and wants before hers. She became an ideal role model, teaching her kids respect, kindness and generosity toward all people and having patience, positivity, perseverance, a strong work ethic and being down to earth.

With her upbeat, outgoing personality, contagious laugh, Lillian easily made friends throughout her long life. She maintained relationships for many years, including neighbors she first met in the 1950s. Lillian never forgot a relative or a friend’s birthday. One would expect a phone call and/or receive a carefully selected Hallmark card and a letter written in her unique penmanship style.

Lillian worked at GE and Honeywell in Phoenix as a secretary in the 1960s and 1970s. After Jerry passed away, Lillian retired and bought a condo in the Moon Valley Phoenix neighborhood in 1995.

Lillian loved to travel and enjoyed vacationing in Switzerland, Canada, the Northwest and cruises to Mexico and Alaska. She loved the mountains in Arizona as well as the Canadian Rockies.

In the last 25 years of her life, Lillian spent almost every summer in Edmonds, staying with her son’s family, to get relief from the harsh Phoenix heat. She often walked to the local senior center in Edmonds for lunch and meet up with friends. Lillian loved to dance and attended the Friday dance events and participated in many of the classes — she especially loved the knitting/crochet group. Lillian enjoyed day trips and the annual Hawaiian luau event. (The photo is of Lillian in 2009 ready for the Edmonds Senior Center Luau, on the deck at son Ray’s home in Edmonds.)

Lillian was also responsible for launching the music entertainment career of her grandson, Edmonds resident Nick Baker. Her early visits to the Edmonds Senior Center led her to comment to staff that the lovely grand piano — sitting idle in the cafeteria area — was just begging for a performer, namely Nick Baker, on Fridays during lunch. Staff decided to act on her suggestion, and Nick’s talent was quickly noted by local residents who lunched at the senior center. Soon, he was invited to entertain at local assisted living facilities.

Lillian absolutely adored her nine grandchildren and tried to spend time with them as much as possible. Becoming a grandmother — and later a great grandmother — were huge events in her life.  Her grandkids loved her very much.