Brutality by some in the police force is not new, but the overwhelming demand for meaningful institutional change to overcome this gives me hope. However, calls for “defunding” the police as the answer gives me pause. So far there does not appear to be a clear roadmap to the changes that follow and how those changes will maintain public safety. It is possible, however, to lay out a realistic plan.

Twenty years ago, while deciding on the 2000 year King County budget, the county council was faced with the reality that in the near future, without any changes, we could expect to spend 60% of our operating funds just on criminal justice – police, prosecuting attorneys, courts and jails.

True, the overall county budget has a better ratio, but that is in part the result of special levies to pay for some of the health and human service programs. Special levies mean more taxes and even these services remain underfunded.

After talking with all the stakeholders, a colleague and I proposed that all King County departments that had anything to do with social and health services and criminal justice carefully study their annual budgets and identify at least 1% each year that could be directed to programs focused on prevention and intervention that addressed root causes of arrests and incarceration. The heads of all the departments, including the sheriff, prosecuting attorney, district courts and county jail strongly supported it. Ten out of 13 Council members passed this bipartisan proposal. Unfortunately, the county executive vetoed it, citing budget constraints. This was unlikely given all departments were on board. Now, the percentage of the King County operating budget going to the criminal justice system looks like it has increased to 74% (Currently, here in Edmonds about 30% of our general fund goes to police, courts and probation.)

Institutional racism is partly enabled and perpetuated by chronic underfunding of and unequal access to basic human social, recreational, educational and health services, including mental health.  We need an aggressive but realistic approach that governments can use to find and fund real solutions. In order to do that we have to commit to three things:

A modest 1% a year shift of funds will no longer cut it. A greater percentage needs to be identified, agreed upon, and directed to programs and policies we know work. Commitment to real change and analysis should drive decisions.

It helps to see this as a triangle. The first triangle below represents where we are in terms of amount of investment vs. the second triangle which is where we should be. 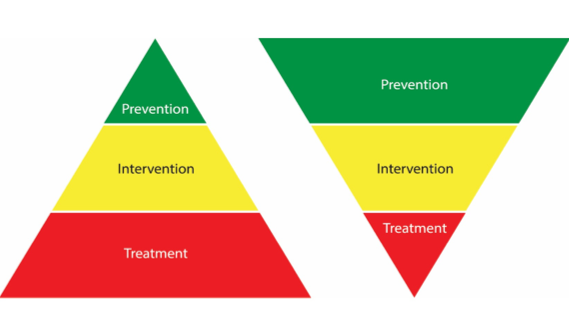 The medical community stresses prevention, intervention and considering the whole patient along with their family. Diet, exercise, stress reduction and wellness checks are part of our primary care visits because physicians know they improve wellness and can decrease the need for expensive treatments. It’s beyond time for our governments to do the same when it comes to social and criminal justice. Dysfunctional politics, expensive consultants and unnecessary studies have no place here.

Our region is blessed with many members of the community who have been working on these issues for decades and can point to successful programs and resources to get this work done.

Let’s also make sure we engage those working directly in the field, on our streets, in the classrooms, in the community centers, in the faith communities and with the courts and detention facilities.  They have great insight as to what works and what does not. Many young people are also eager and willing to be called to serve.

The budget of every government and business is a reflection of their values – the true test of where their hearts and minds are. Change is hard but it is possible. It is imperative. All our children and their children deserve it. President Nelson Mandela stated it simply:

“A good head and a good heart are always a formidable combination.”