States across the country are taking lessons from Washington’s almost 10-year tradition of voting by mail. Washington is one of five states that sends ballots to all registered voters – with or without a pandemic – along with Oregon, Colorado, Utah and Hawaii.

Kristin Eberhard is director of Climate and Democracy at the Sightline Institute’s Democracy program, which gave Washington an “A” for preparedness. She said all states previously had some familiarity with absentee voting, but the demand has increased massively this year.

“Nobody is starting completely from zero, but they are definitely learning from their fellow officials here in the West,” Eberhard said.

Ballots go out to Washington voters on Oct. 16, and need to be postmarked on Election Day or returned by 8 p.m. at one of the state’s nearly 500 drop boxes and voting centers.

And there are in-person options too, for voters who may need assistive-voting devices, language assistance or other support. More informations and guidelines for Washington voters are available at sos.WA.gov. 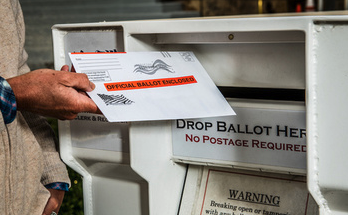 Secretary of State Kim Wyman said election officials nationwide have reached out to her office for advice. She recommends states make sure they build in security measures — signature matching and numbered seals on envelopes. And she said it’s crucial that officials have the time and capacity to process ballots, and that all counties have the same standards and practices.

“We have a lot of control measures, both physical and electronic, and all of those things work together to secure the system,” Wyman said.

Wyman, a Republican, says Washington’s is a secure and accessible system, and there’s no partisan advantage.

“We as election officials just have to work that whole political spectrum and try to inspire confidence in our harshest critics and our biggest supporters,” she said.

Wyman said if voters are concerned, they should contact their election officials and learn more about the process. Snohomish County election information can be found here.