Each week we scour the internet to collect the latest information on the COVID battle from the global to the local levels.  Our aim is to provide you – our readers – with a one-stop-shop to gain a comprehensive overview of progress in fighting the pandemic at all levels.

The global spread of COVID-19 continued unabated this week, with 2.1 million new cases, up from 1.7 million last week (see our earlier reports for Sept. 14 and Sept. 9 for comparison). Deaths worldwide were also up, with 36,572 added compared to 31,426 last week. The United States continues to lead the world in sheer number of cases, now surpassing 6.5 million — ahead of India, Brazil and Russia in that order.

The most recent tabular display of the top 10 nations worldwide from the World Health Organization shows similar numbers, the discrepancies due to the updates being taken in different time zones (WHO is based in Europe, and due to time differences the numbers are approximately 10 hours earlier than Johns Hopkins, a testament to how quickly new cases are diagnosed and added to the count). 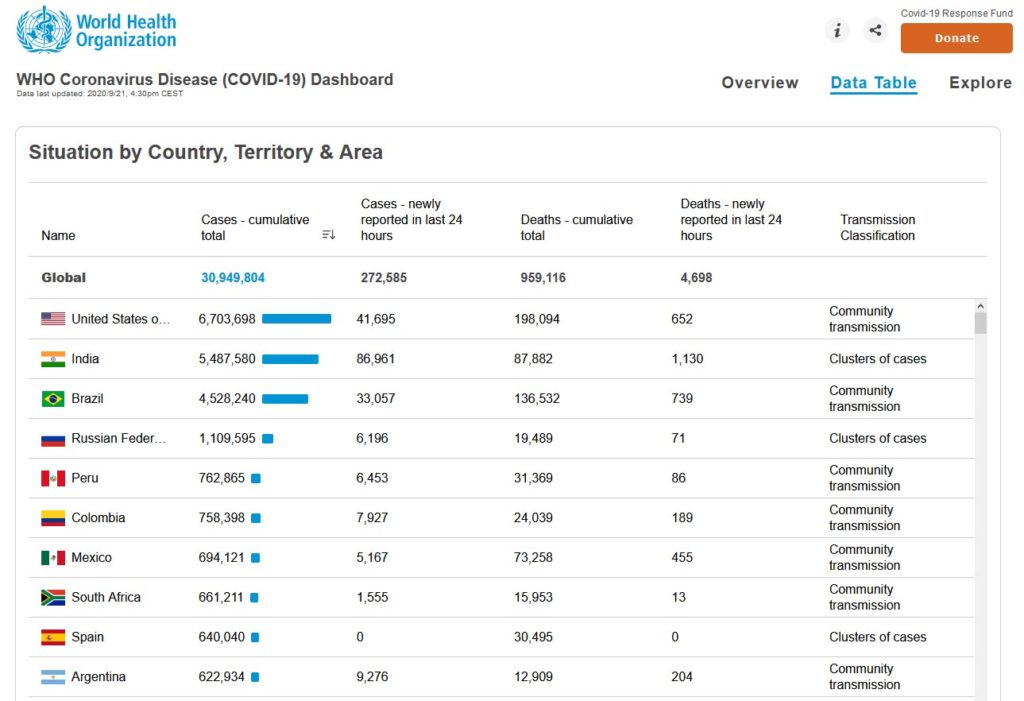 While the U.S. leads the world in overall case numbers, it rose from 11th to 10th place this week in per capita cases (expressed here as cases per one million population, ninth column from left).  Note that with the exceptions of Brazil and Mexico (pop. 213 million and 129 million, respectively) all countries in this table have much lower total populations than the U.S. (See the complete interactive table here.) 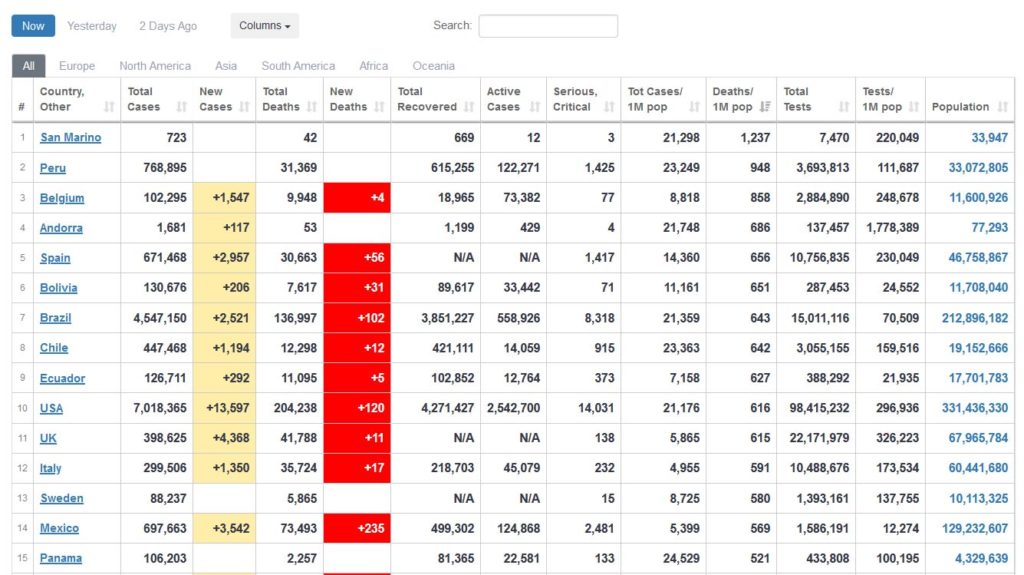 Taken by region, while the Americas continue to lead the world in the daily new case counts, this metric has remained relatively steady for the past six weeks, suggesting that viral activity is leveling off in this hemisphere. By contrast, daily new cases in Asia are on the rise, adding 700,000 last week. According to this report from NPR, cases are raging in India, putting that country on track to surpass the U.S. as the country most affected by COVID-19. 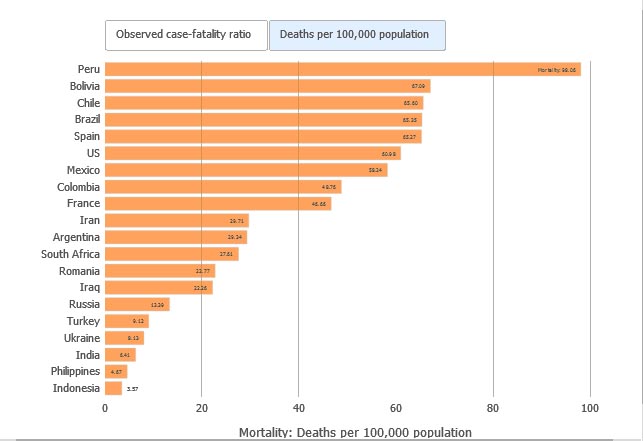 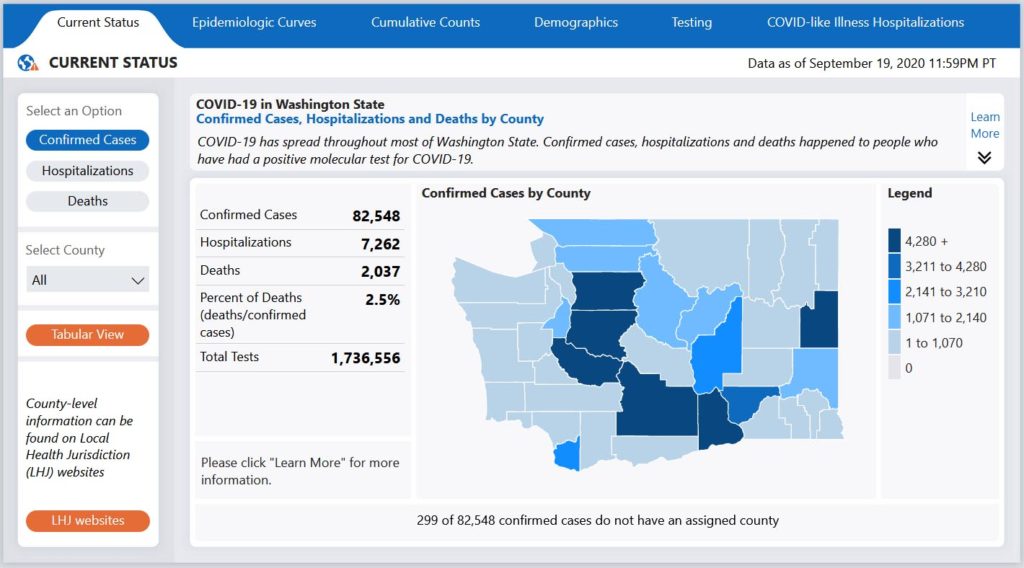 And now for the good news — Washington state is entering the third month of steady decline in new cases from the mid-July peak.

While no single factor likely explains this reduction, heath department officials attribute it to the combined effects of wearing face coverings, limiting social gatherings, and maintaining physical distance in public. While the general decrease is encouraging, hotspots continue to persist in college towns, prisons, hospitals and some counties. 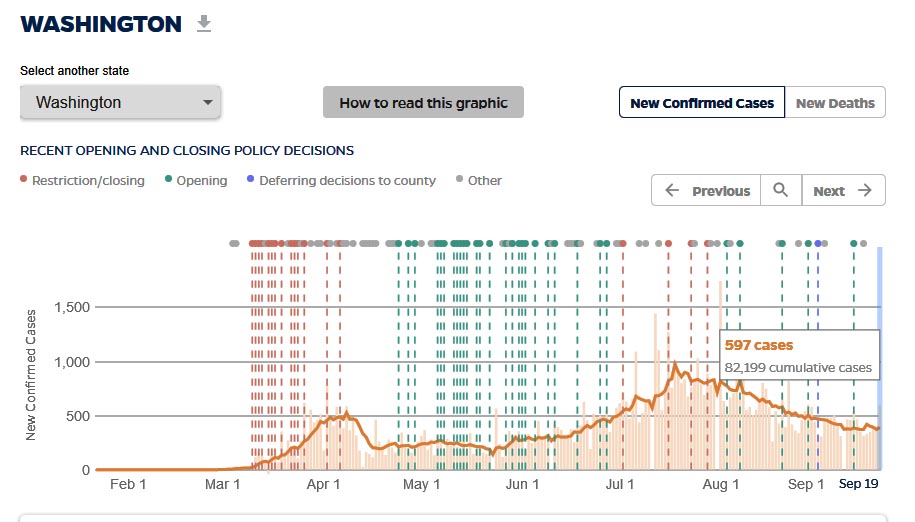 This drop in new cases is also reflected in a Sept. 17 case rate of 74.6 (cases per 100K population, two-week rolling average), a drop of almost nine from the previous week’s report of 83.8. While this still remains short of the Department of Health goal of 25, it is moving in the right direction. 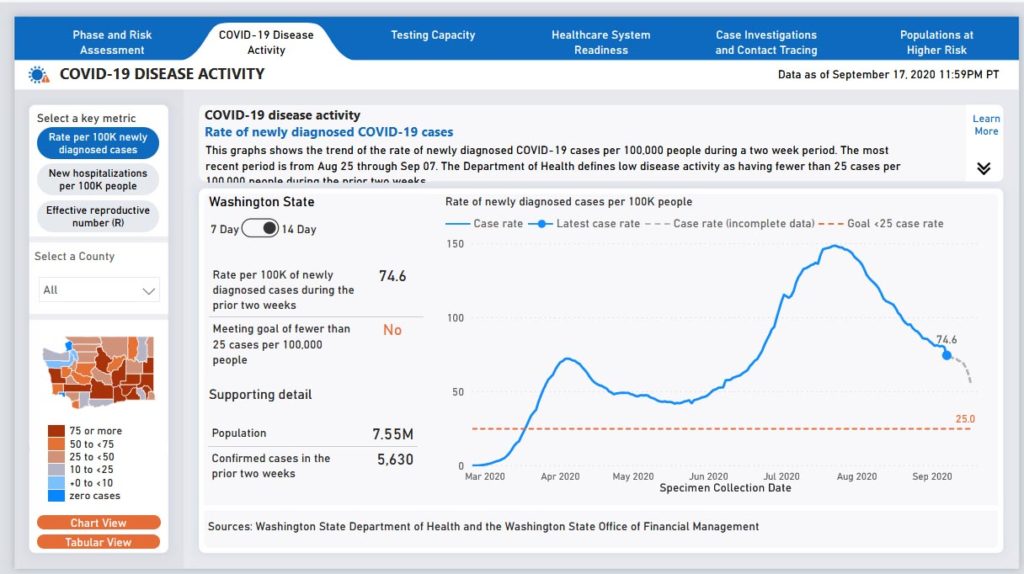 The good news extends to Washington State’s daily COVID-related hospitalization and death counts, with both continuing their encouraging downward trends. Hospitalizations have now reached the historic lows of late May and early June, and preliminary recent data (grey bars) project this trend to continue. Deaths continue to plummet from the early August bump (note that the hospitalization chart from DOH reflects Sept. 19 data, while the mortality chart from Johns Hopkins includes data through Sept. 18). 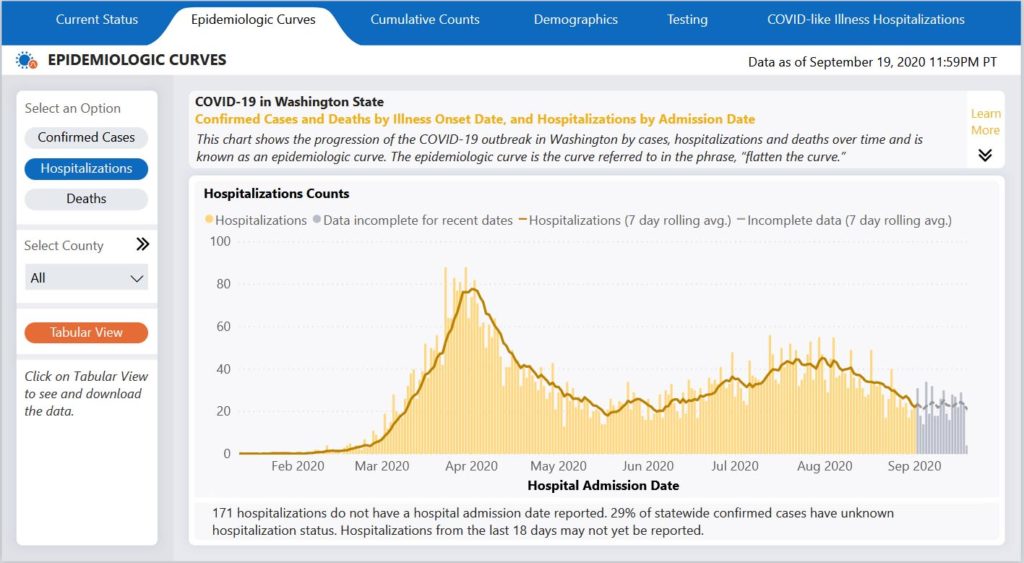 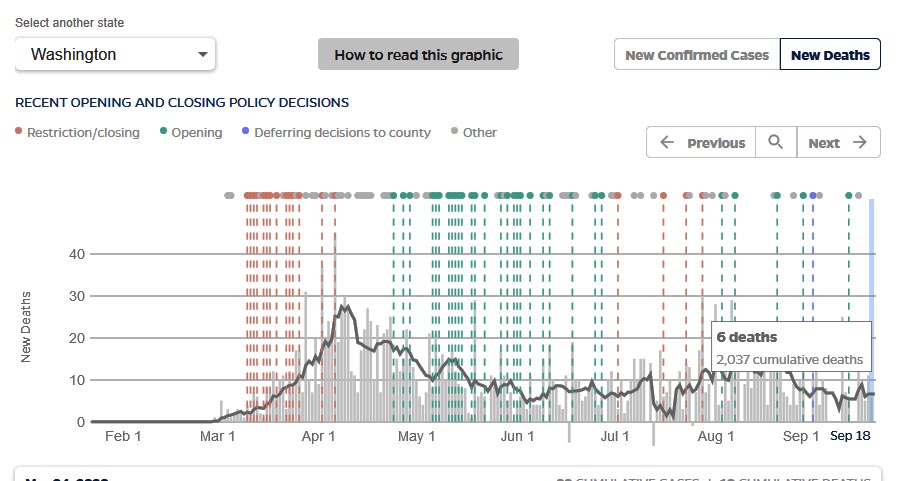 The charts below represent the fourth week of test results reporting under the new DOH protocols. These figures now reflect total testing volumes rather than just the number of new individuals receiving a negative or positive test result for the first time (i.e., if an individual is tested more than once, each test is counted). 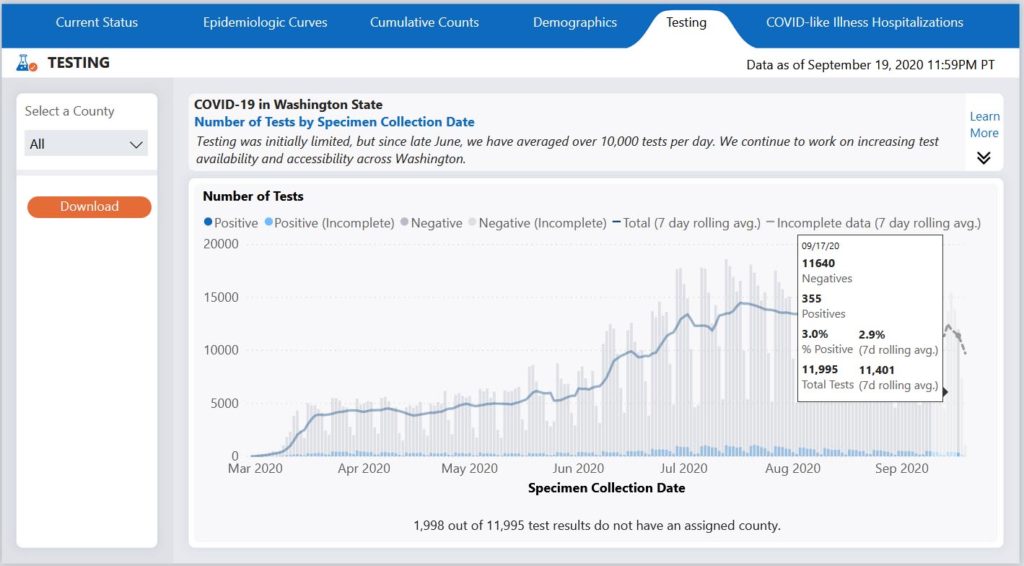 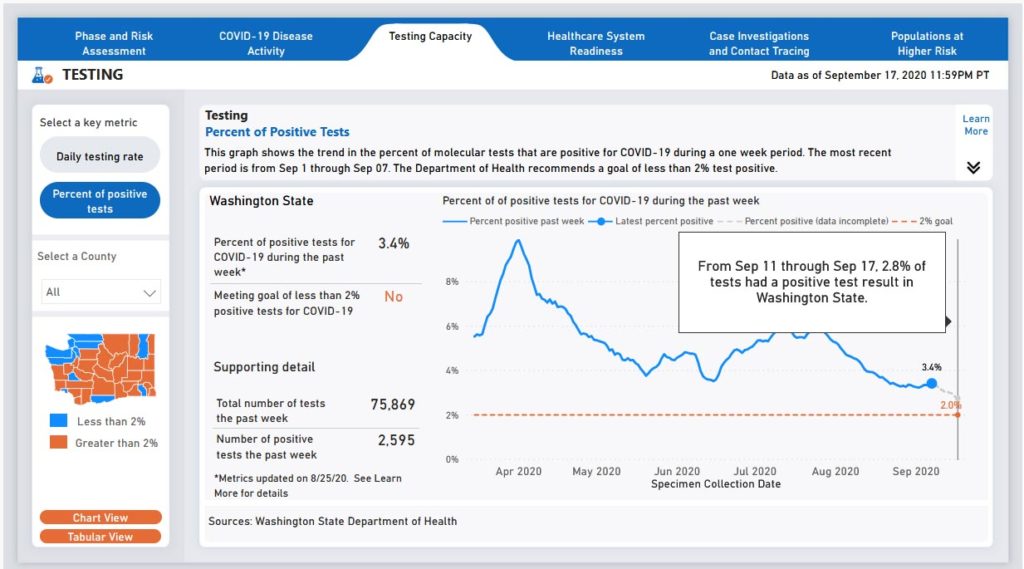 It is important to note that while overall statewide numbers are falling, significant variation persists among counties.  Chelan, Douglas, Yakima, Benton and Franklin counties have yet to move beyond modified Phase 1, while several others have moved to Phase 3. In our area, Island County continues as the lone county in the northwest quadrant of the state to qualify for Phase 3 reopening. 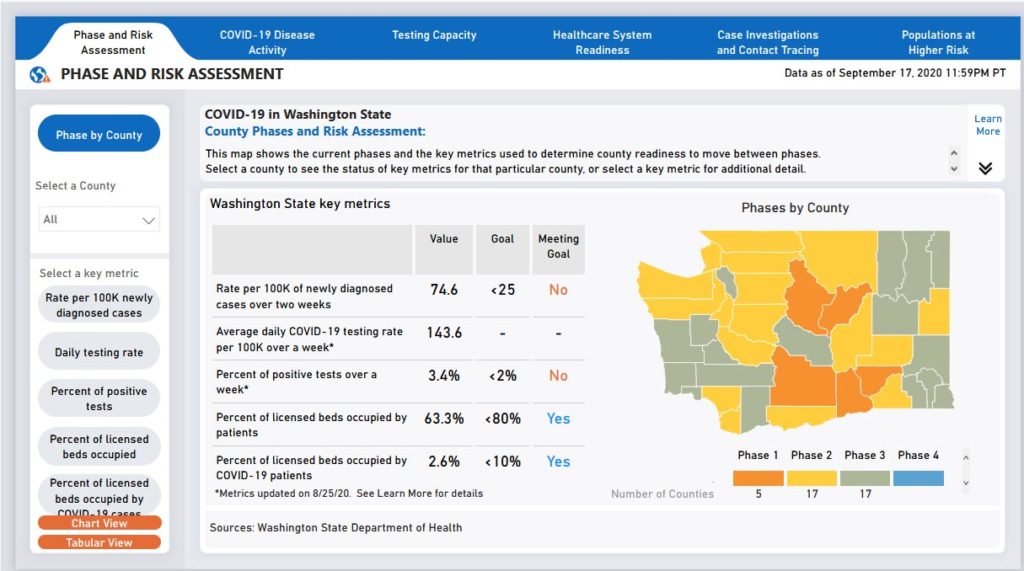 State demographic patterns continue unchanged, with the Sept. 19 report following the familiar pattern of most infections among younger people, and most hospitalizations and deaths in older populations. Note that more than half the COVID-related deaths occur among those 80 years old and more. 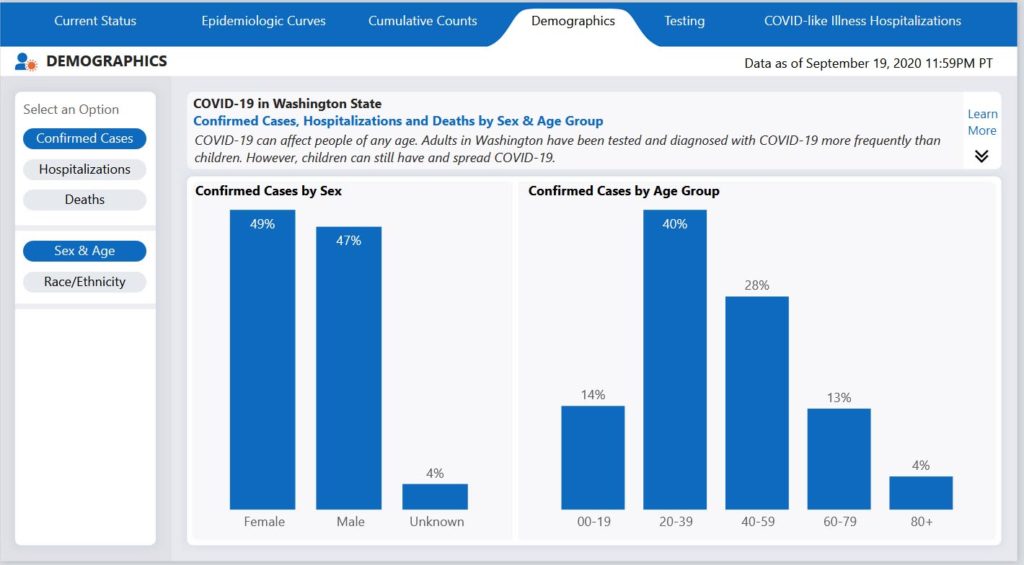 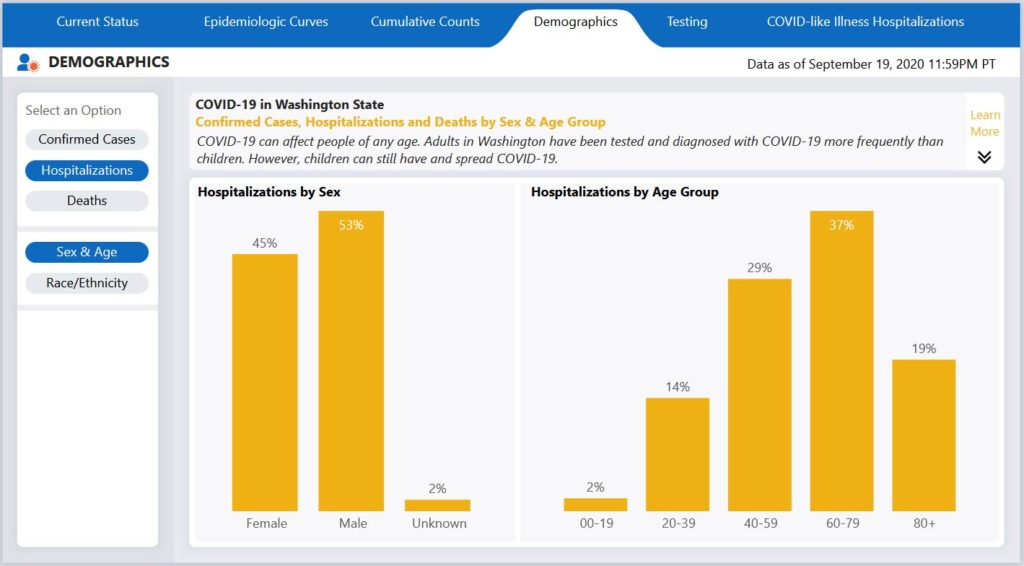 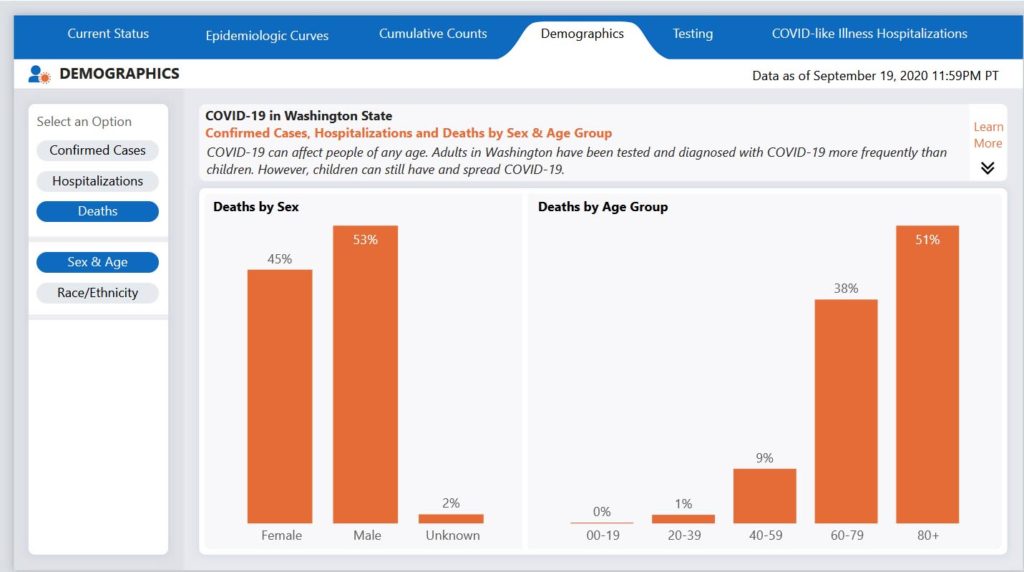 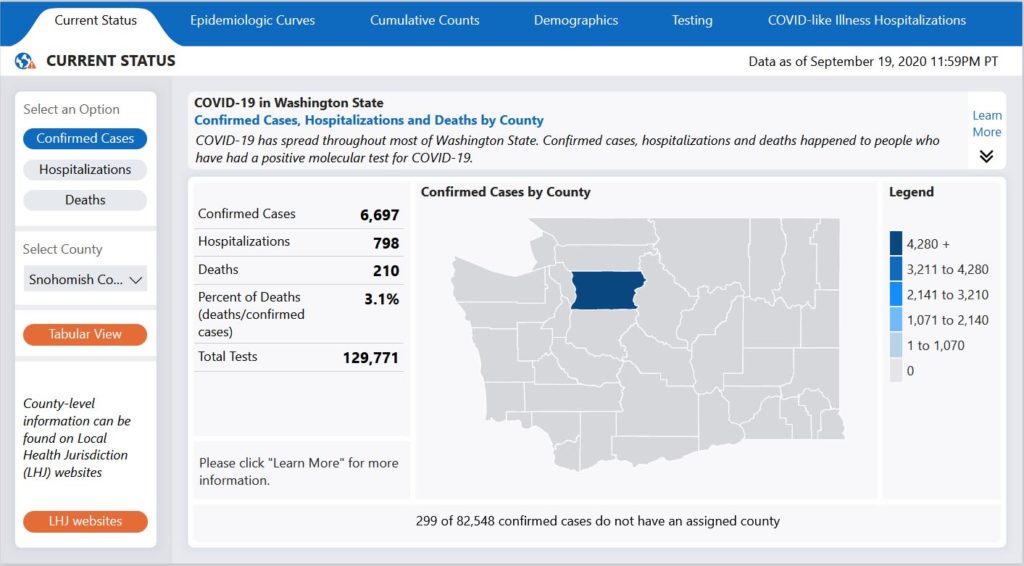 The Sept. 19 county daily new case count reflects the steep decline statewide, but is expected to continue declining to the all-time low levels of June as more recent data (grey bars) are processed and verified. 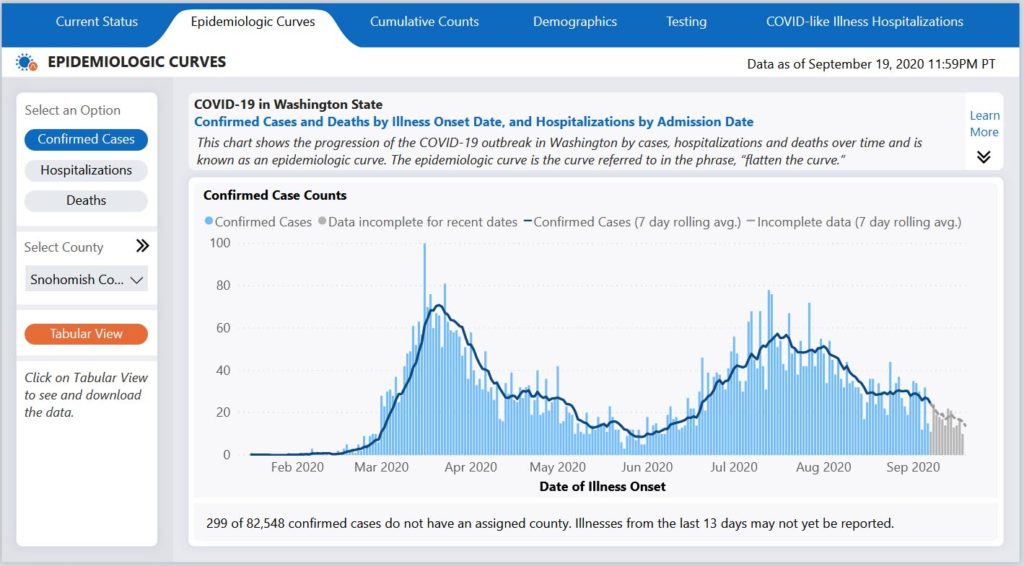 Trends in critical county measures over time (total cases, recovered cases, and active cases) are shown below (note that these numbers are through Sept. 12). 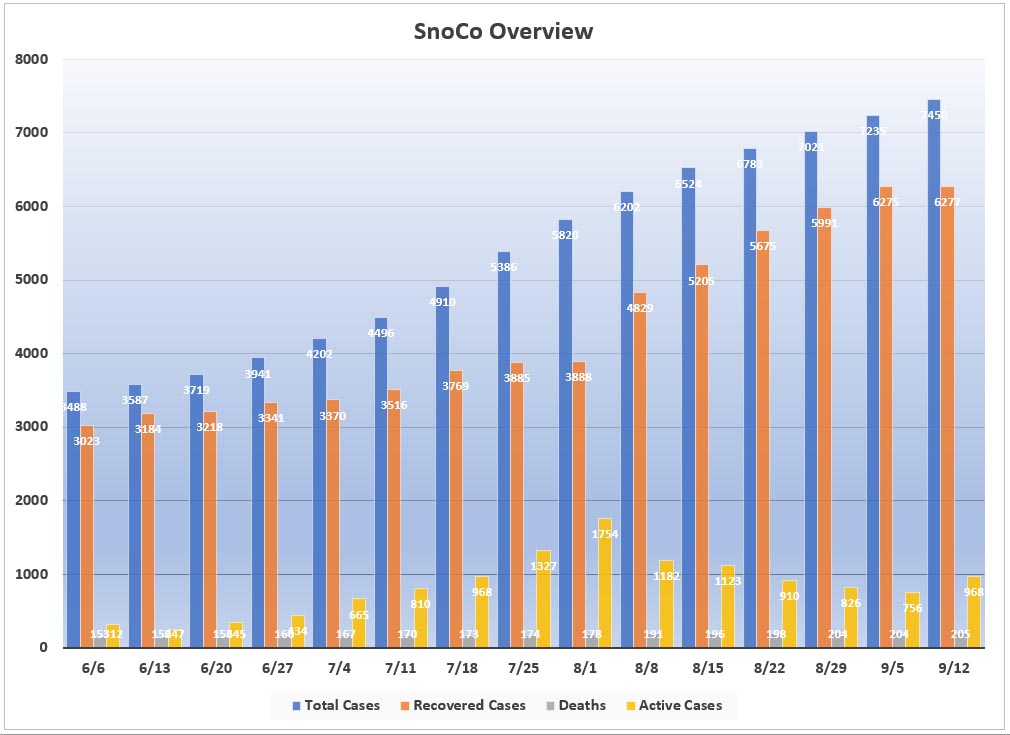 Cumulative case counts for the county continue to level out, another indicator that the spread of the virus is slowing in our area. These numbers are also through Sept. 12, and come from the most recent weekly report from the Snohomish Health District, and do not include more recent and as yet unverified data. 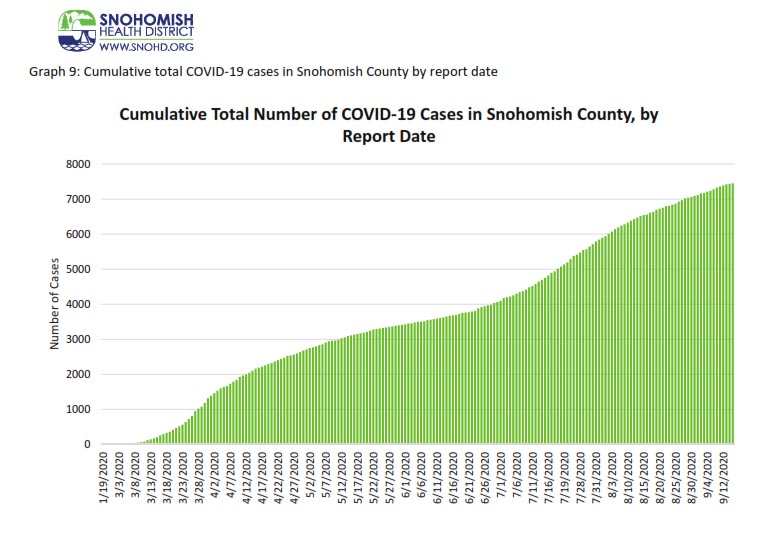 Reflecting this trend, as of Sept. 12 the case rate (cases per 100K population, two-week rolling average) stands at 43.5, down from 48.8 the previous week, continuing the decline begun in mid-July and closing in on the DOH goal of 25. 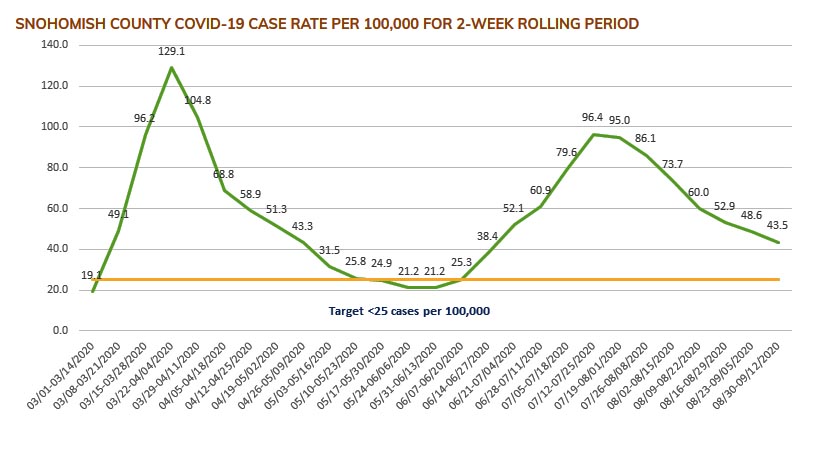 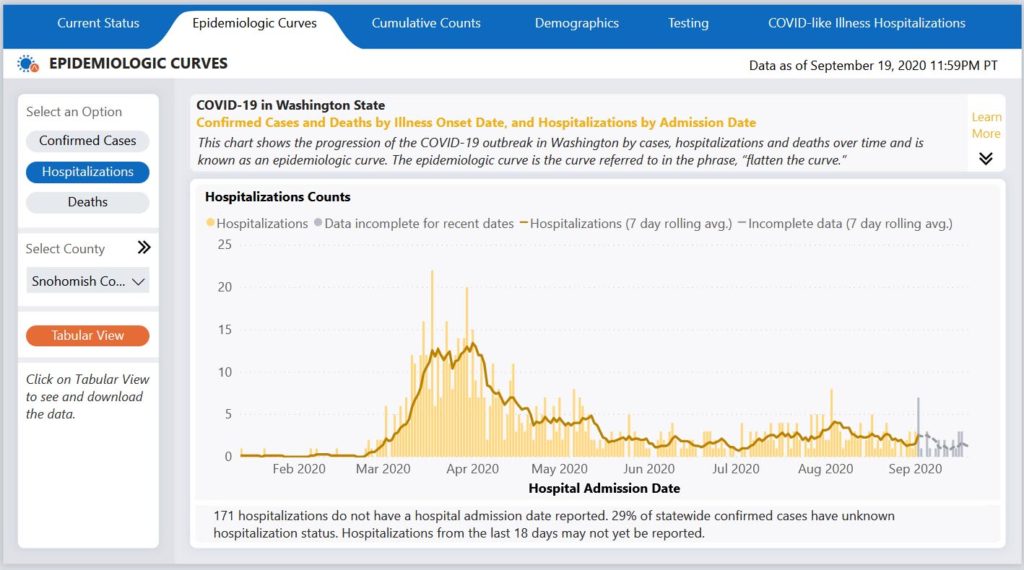 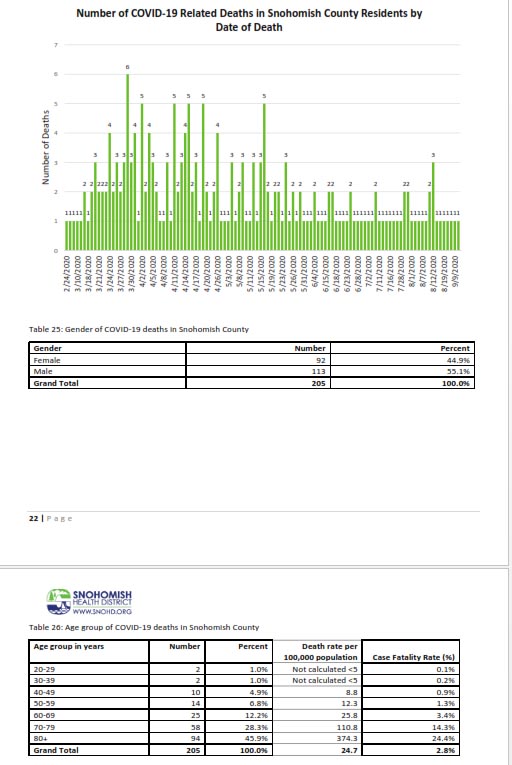 Testing activity at the county level continues at a relatively high level. The testing activity chart and table below reflect and compare overall counts with numbers of positive results through Sept. 19 and Sept. 12 respectively.  Note that the positivity rate continues to decline, an encouraging trend. 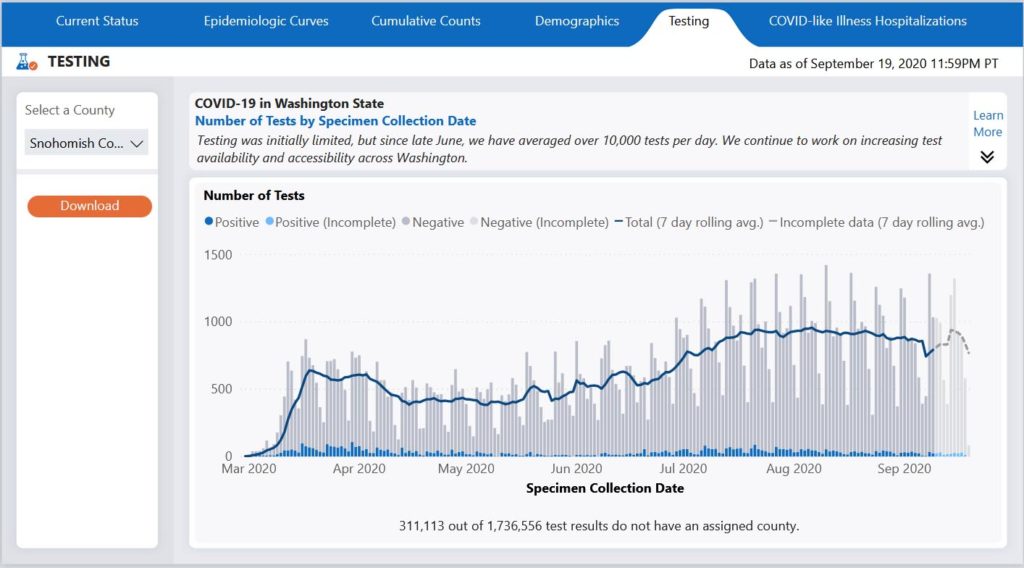 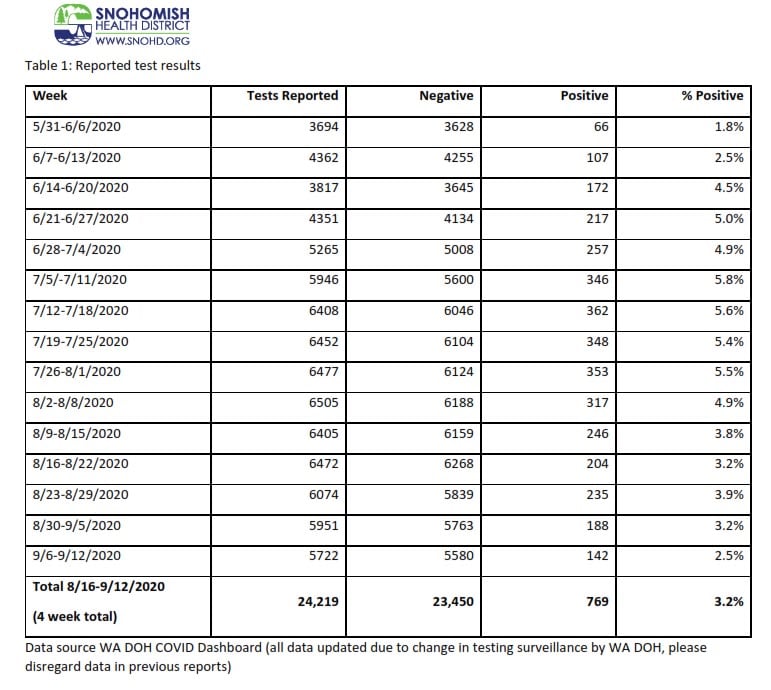 Note: These data are taken from the COVID-19 Weekly Update report from the Snohomish Health District, which summarizes verified data as of the end of the previous week, in this case Sept. 12.

Critical metrics (total cases, recovered cases, deaths, and active cases) for our home cities are shown in the charts below.  The good news is that active case numbers have been generally declining over the past four weeks, an encouraging sign that our local communities are taking the necessary measures to stay safe. Note that death and active case figures are not available for Mountlake Terrace for 6/6, 6/13 and 6/20. 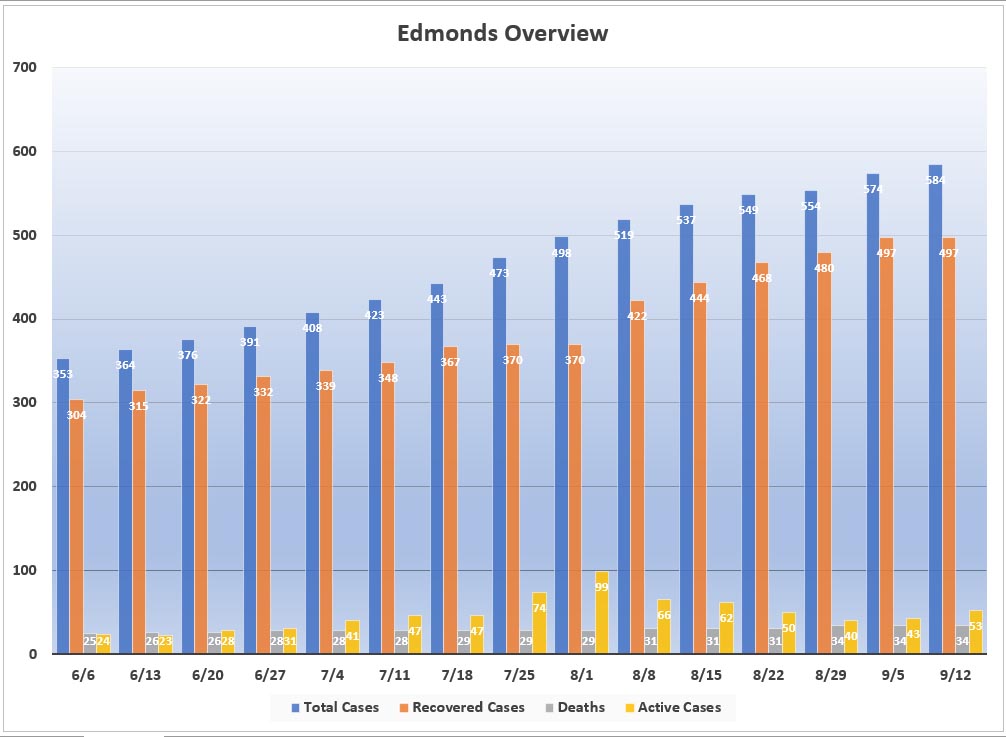 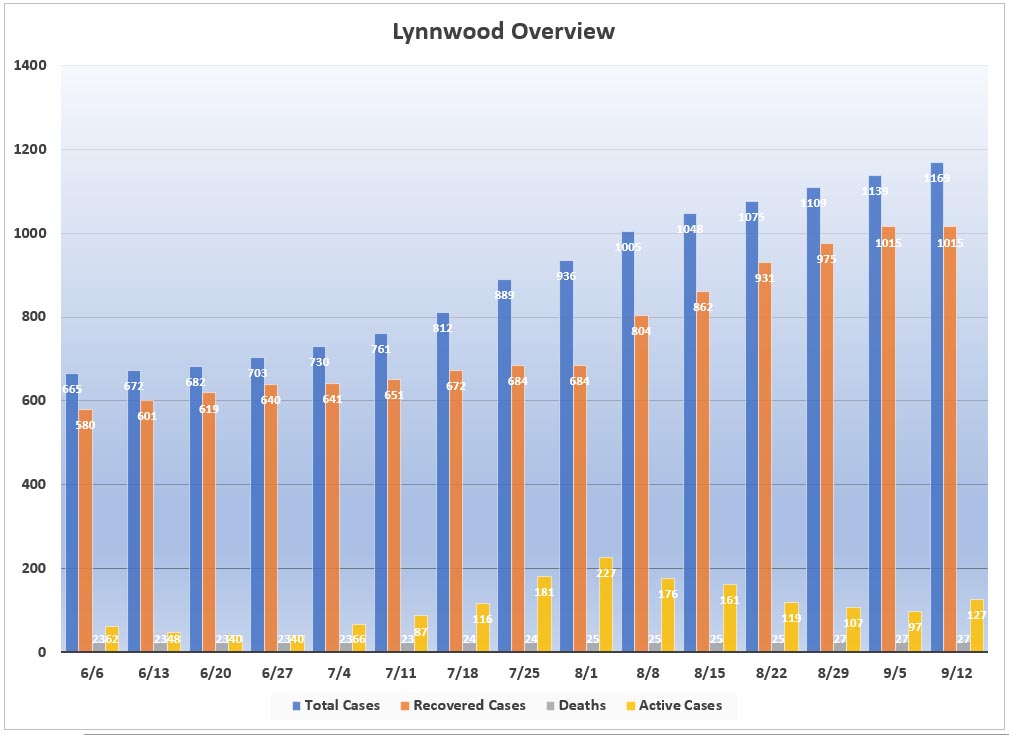 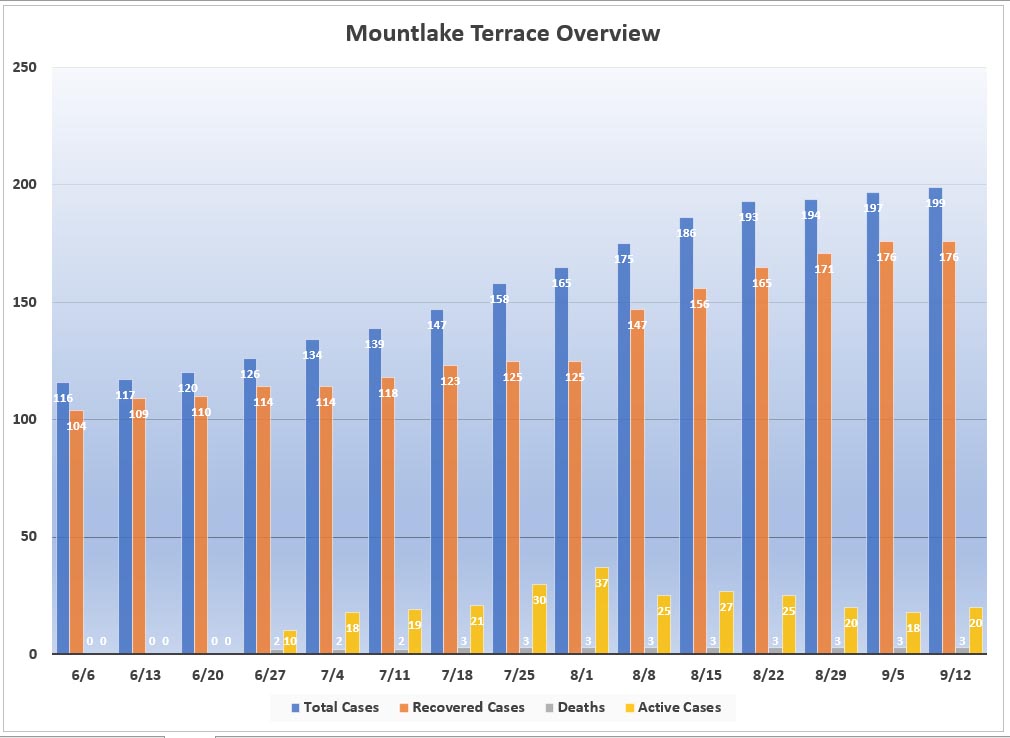