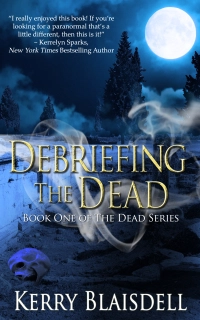 Debriefing The Dead, by Kerry Blaisdell

Hyacinth Finch is having a tough day. She’s found a mysterious rock that has mystic powers. She had no idea that demons, and also the brutal Sicilian Mob, are in deadly pursuit to steal it from her. After the bad guys murder Hyacinth and her sister, they carry away the rock in triumph and with horrific intentions. Now dead Hyacinth starts intense negotiations with Archangel Michael, who is Debriefing The Dead. She wants to get her life back, in order to protect her innocent 7-year-old nephew from a life growing up in the Mob. But in order to agree, Michael wants an ominous task completed in return.

After, Hyacinth is reunited with her nephew Geordi. She’s determined to keep him safe, and at the same time she has to begin a dangerous search ordered by Michael. She must recapture the rock by a meaningful and unmovable deadline, or risk dire consequences for failure. Demons and the Mob have hidden it, are guarding it, and are on to her. She has to keep her mission secret from everyone. She gets some surprising help. Her gratitude is tempered by her uncertainty about what honestly motivates the aid from her mysterious neighbor Jason, and Eric — a dead man who is stuck wandering the world, unable to find his way to the after life.

Yes, dead people populate the world. No, you can’t see them, but other dead people can see them and talk with them. Now that she’s formerly dead, Hyacinth enlists Eric’s help. It does make things complicated with Jason and Geordi, who think she may be turning crazy, talking to no one they can see. They travel to Turkey and begin a stealthy search to rescue a specific, powerful rock despite powerful demons, the Mob, the mystery of where the rock is hidden and what it will do. Still, there is some time for the very human celebration of life, humor, adventure, family, and even romantic attraction.

Award-winning author Kerry Blaisdell has written a powerful urban fantasy. Debriefing The Dead is the first of her series. The story is full of action, yet the author finds time to create fascinating and colorful characters without slowing down the page turning pace. The descriptions are so visual and exciting. Find out more about the author at her website kerryblaisdell.com and tune into YouTube’s A Novel Talk with Kerry Blaisdell  to hear directly from the author.