How are Edmonds businesses faring during the COVID-19 pandemic? Two recent online surveys provide some insight into that question.

A total of 116 businesses responded to the survey, which was conducted via Survey Monkey and publicized via social media and through the city’s business organizations (Edmonds Chamber of Commerce, the Downtown Edmonds Merchants Association and the Edmonds Downtown Alliance), said Patrick Doherty, the city’s Community Services and Economic Development Director who also staffs the CEDC.

Edmonds has a total of 2,134 licensed “in-city” businesses, with another 1,278 licensed to do business here but located elsewhere, Doherty said.

Of those responding, 28% were in the retail sector, 22% in hospitality (restaurant/catering/lodging), 17% in personal services (such as a salon or gym), 10% in professional services and another 10% in arts and entertainment. The remainder were in banking/finance, education/child care, and nonprofits.

The survey included a range of questions, from the percentage of normal activity at which the responding business operating to the biggest challenges a business is facing during the pandemic.

– Open businesses have taken a range of measures to operate safely during the pandemic. For example, 87% require face masks for employees, 85% have changed how they engage with customers, 67% have rearranged their workspace or floor plan and 50% take temperatures of employees or customers. Of those responding, nearly 47% have changed how they engage with suppliers while nearly 34% have adjusted the locations of their workers, such as having them work from home or adding another workspace for social distancing. 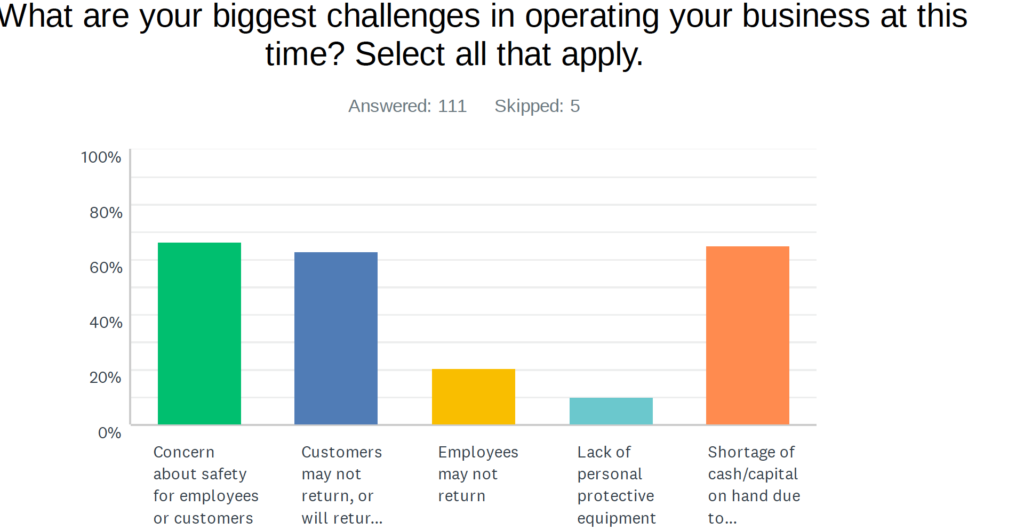 – In response a question regarding the biggest challenges in operating their business, there were three main answers: For nearly 67 percent, it was the concern of safety for employees or customers. For 65%, it was a shortage of cash/capital on hand due to business closure or slowdown. And for 63%, it was the worry that customers may not return, or will return too slowly.

– Addressing a question regarding what resources they need to be successful during the pandemic, nearly 85% of those responding said it was working capital, such as loans or grants. The second greatest need, according to 33% of respondents, was protective equipment such as face masks/shields and rubber gloves. Other needed resources were workers/employees (17%), education or training on customer or employee safety (nearly 12%), nd thermometers (nearly 10%).

– Asked what education/collaborative resources would help their business stay open/thrive, 72% responded it was loan or grant information, nearly 26% said it was information on lessons learned/better practices from other Edmonds businesses, and nearly 26% replied they could use finance seminar/information. Just over 3% of those responding said they would like information on bankruptcy.

Businesses were also asked an open-ended question: If there was any help they could use from local city leaders “to help you sustain your businesses at this time.” The answers (see full list here) ranged from the need for more financial help in the form of grants or loans, to talking to landlords “to convince them to reduce rent,” to “finding solutions that will help business in all of Edmonds not just downtown core.” There were also a range of opinions expressed regarding the city’s decision to partially close Main Street on weekends, with some supportive and others opposed.

Related to that city initiative, known as Walkable Main Street, the Edmonds Downtown Association last month conducted its own survey, which had a 57% response rate among the 115 survey invitations sent. Of those responding, the majority (61%) were retail businesses while 29% were restaurants, and 9% defined as other.

Edmonds Downtown Association President Pam Stuller said the survey was aimed at addressing “a fair amount of discord amongst our downtown Edmonds business community” after the city implemented Walkable Main Street. The initiative, which involves closing Main Street between 6th and 3rd Avenues South to vehicles on weekends, is designed to give customers a pedestrian-friendly environment and businesses room to expand services outdoors during the COVID-19 pandemic. It’s set to run through the weekend of Oct. 10-11.

Of those responding to the Edmonds Downtown Alliance survey, 58% were located within the closed area of Walkable Main Street. Two-thirds of those responding have been at their current location six years or more, while the remainder at their location for five years or fewer.

– 36% of those responding said Walkable Main Street has increased their business, 29% said it has decreased it and 31% said it had no impact.

– Among the top reasons given for supporting Walkable Main Street, 21% cited safety and 16% pointed to increased foot traffic. Other reasons included that it is good for restaurants, brings others to Edmonds, and demonstrates community spirit.

– The top three concerns regarding Walkable Main Street included parking (27%), that it doesn’t help business (10%), COVID and pedestrian safety (9%) and the aesthetics of the signs and barriers (9%).

The goal of the survey, Stuller said, was to “try to get more information from members to open the dialogue so they could learn more about issues and come to a consensus and take that input to the city.” There was also a roundtable discussion via Zoom, with about 20 businesses participating, she said.

While Walkable Main Street has been “really fabulous” for the restaurant community, Stuller stressed that she wanted to ensure that all types of businesses were heard.