The meeting — open to all citizens — drew about 30 viewers to the Zoom platform, where Nelson started by addressing “major issues in Edmonds,” including the status of Highway 99 redevelopment, the city’s response to COVID-19, economic recovery, equity and justice and the budget.

Regarding Highway 99, the city is in the design phase of the new Gateway project, which includes installing landscaped medians along the entire centerline of the Edmonds’ section of the highway to improve both safety and aesthetics. “It does two things,” Nelson said. “It helps beautify the area to help encourage redevelopment and it also provides a traffic safety element. We know just by installing the center median along the entire two-mile stretch of the corridor, will reduce traffic collisions by 25 percent. The city hopes to begin construction next year, he added.

The city will also be installing gateway signs at either end of the Edmonds’ highway section, “to welcome you when you enter our city,” Nelson said.

And because there is a mile-long section of Highway 99 where there are no safe places for pedestrians to cross, the city will be installing a pedestrian-activated crossing signal similar to the one now located on Highway 104 on the way to the ferry terminal, the mayor added.

Nelson said he has also included in the city’s 2021 proposed budget —  now before the city council — a Conmunity Renewal Plan for the southern portion of the highway, “where we’re seeing lots of issues of crime, graffiti, nuisances, code violations and just in general disinvestment.”

The city council in 2017 approved a Highway 99 subarea plan that included zoning changes to encourage redevelopment, Nelson explained. The city also has been considering a robust revitalization plan for the highway similar to Aurora Avenue North improvements made by the City of Shoreline, but that would cost an estimated $150 million and isn’t currently feasible to undertake.

“The hope was really that we would encourage seeing some redevelopment, and we’re just not seeing that yet,” Nelson said. The proposed Community Renewal Plan for Highway 99 is based on the Commmunity Renewal Act — a state law — aimed at helping cities set priorities and strategies and giving them the ability to partner with private investment, the mayor said.

As for the city’s response to COVID-19, Nelson began by highlighting the trend —  both locally and nationally — that new cases of the virus are again increasing. “This is a real, real problem, and I understand that everyone is experiencing pandemic fatigue,” the mayor said. “This is not the time to let our guard down. We have to be vigilant.”

He then went on to describe how the city has worked to support both individuals and businesses during the pandemic, with the help of federal CARES Act funding. So far, the city has awarded $239,000 in housing and supplemental relief grants — to help with expenses like rent, groceries and utiities — to 212 households, with another 279 applications pending. “That’s 491 households already that we are looking to support because of this pandemic,” he said, noting there is $580,000 dedicated to that fund. The city has also awarded $700,000 so far to 90 Edmonds small businesses, with 55 more businesses targeted to receive funds — for a total of $1.1 million in small business grants.

(The deadline to apply for business grants — with up to $8,000 available per business — is Oct. 21.  Applications for housing and supplemental relief is ongoing, with up to $1,000 is available to households of up to two members and up to $1,500 to households of three or more members who meet the income criteria. Applications may be submitted through https://wellspringfs.org/edmonds.)

Speaking to the topic of equity and justice, Nelson noted that in June he formed a mayor’s advisory Equity and Justice Task Force — comprised of community members and business owners — “to help identify and correct issues of systemic and implicit bias in our city operations.” The task force will advise the mayor on recommended changes in city government policies and procedures, the mayor said. The task force has been divided into two groups — community engagement and organizational transformation — and will address a range of areas, from policing to the city’s hiring practices, the mayor said.

The task force will be submitting a report with recommendations to the mayor in January, Nelson said.

The 2020 budget also includes funding for citywide staff training on equity and diversity and a new arts grant fund that focuses on equity and inclusion, he added.

The mayor then highlighted some of the priorities mentioned in his early October budget address, including $500,000 allocated for the creation of a human services program that includes hiring a full-time social worker, a Salmon Safe Certification Program that assesses city policies that impact watershed water quality and habitat, open space acquisition and pedestrian safety improvements.

While Nelson said his proposed budget reflects the uncertainty associated with being in a pandemic, he added that the city “should also not shy away from the opportunities that are before us, real opportunities to make our city resilient, healthier, safe and welcoming for all.” 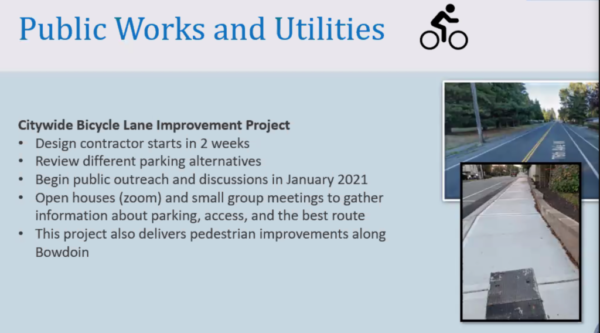 Thursday night’s meeting also included reports on various city departments. Public Works and Utilities Director Phil Williams talked about the Citywide Bicycle Lane Improvement Project, which will add bicycle lanes to “three key sections of city street” — Bowdoin from Five Corners to 9th Avenue, 9th Avenue from Main to SR 104/Edmonds Way, and south of SR 104 to Highway 99. The city council is scheduled to approve as part of its Oct. 20 consent agenda a contract with a consultant, who will be tasked with organizing community outreach efforts to get citizen opinions about the project, Williams said. “We’re focusing very much on talking with the community that these (bike lanes) will affect before we settle on a design and move forward,” Williams said.

Parks, Recreation and Cultural Services Director Angie Feser highlighted the city’s new Learning Enhancements and Activities Program (LEAP) distance learning day camp for 2nd through 6th graders. The program, which starts Oct. 19 and runs from 7 a.m.-6 p.m. each weekday, will provide a safe and supervised day camp setting that allows children to focus on their academic efforts while engaging in fun camp activities. The city is offering full scholarships to households that qualify for the Edmonds School District’s free and reduced meal program, and also has “hardship scholarships” for those don’t fit the free and reduced meal criteria. You can learn more about LEAP here.

Turning to an update for the city’s development services department, Nelson reminded citizens to visit the Citizens’ Housing Commission online open house and community survey to learn more about the commission’s second set of housing ideas. The open house and survey are part of community outreach by the housing commission to gather and organize community input on housing policy concepts from zoning to community programs. The deadline to participate has been extended until Sunday, Oct. 18 and the open house and survey can be found at ECHCOpenHouse.com

Providing a police department update, Acting Police Chief Jim Lawles invited citizens to track crime in their neighborhoods using the Community Crime Map available on the department’s website. The Five Corners/Chase Lake neighborhood “is not a high-crime area but there are the mail thefts and the vehicle prowls and the burglaries that can be sporadic,” Lawless said. “We have been pretty successful in arresting several prolific mail thieves as of late,” he added.

The mayor also addressed several questions that were either submitted live during the Zoom meeting or to the city in advance. Among them:

1. How can city take on new projects and keep employees with a tighter financial situation due to COVID-19?

“It’s one of those balancing acts,” Nelson said. “You have to plan for and budget for this unknown.” However, the mayor added that in preparing the 2021 budget, “staff did come to me with $3.5 million in projects that I decided not to fund. So although you may think there are a lot of things we’re funding, actually there are a lot of things we’re not funding.” The goal, the mayor said, is to ensure that citizens continue to receive essential services through the pandemic

2. Can the city’s Block Watch program be restarted?

The volunteer program requires a lot of resources and coordination, the mayor said, adding he would research whether it would feasible to bring it back.  Nelson also said he would like to see the police department “get back into more of a community services-focused area where we all are chipping in and helping out. I’m open to any and all ideas.”

3.  Has anyone in the city’s workforce of 250 employees tested positive for COVID?

“Yes,” Nelson replied, adding the number was “less than the fingers on one of my hands.” All employees who had COVID “have fully recovered and did not get it while they were on duty working for our city,” he said.

4. What is the status of Five Corners revitalization? Will you upzone or increase density?

While the city council reviewed a “concept plan” related to Five Corners redevelopment several years ago, Nelson said he is focused on Highway 99 revitalization. A similar effort at Five Corners “is not a priority for me,” he added. The topic may be revisited in a couple of years, at which time “the public will have an opportunity to provide input and involvement,” the mayor said.

5. What is racial makeup of city employees?

In Edmonds, city workers “self identify,” Nelson said, and based on that practice, 20% identify themselves as persons of color or biracial. “Probably our most diverse department is our police department,” the mayor said.

6. How is the city supporting Five Corners businesses?

Nelson said that the city is supporting businesses in all areas of the city, and every small business is eligible to apply for CARES Act grant funds if they have been impacted by COVID-19. Five Corners businesses are among those receiving those grants, he added. The city has also been allowing restaurants to temporarily offer outdoor dining without a permit, and Five Corners restaurants have taken advantage of that. City staff are now working on code changes to ensure all businesses can provide outdoor dining in “a structurally safe way,” as winter weather approaches.

7. Is there a mandate to increase city population or density?

“The only thing that is required under (the state’s) Growth Management Act is that the city provide planning documents iwth projections on how much we think our city will grow and how we will accommodate that growth,” Nelson said. Generally, the city has always been able to meet those numbers, and redevelopment on Highway 99 would address most of the city’s housing growth in the next 20 years, he added.

You can watch a recording of the mayor’s Oct. 15 town hall via Facebook here  The next neighborhood meeting will focus on the Highway 99/Lake Ballinger area in December.