This week’s global count shows a gain of almost 2.4 million new cases, up from 2.1 million last week (see our earlier reports for Oct. 5 and  Sept. 28 for comparison). Deaths worldwide continue their upward swing, with 39,939 added compared to 39,556 last week and 37,221 the week before. The United States continues to lead the world in sheer numbers of cases, surpassing 7.7 million, ahead of India, Brazil, and Russia in that order. 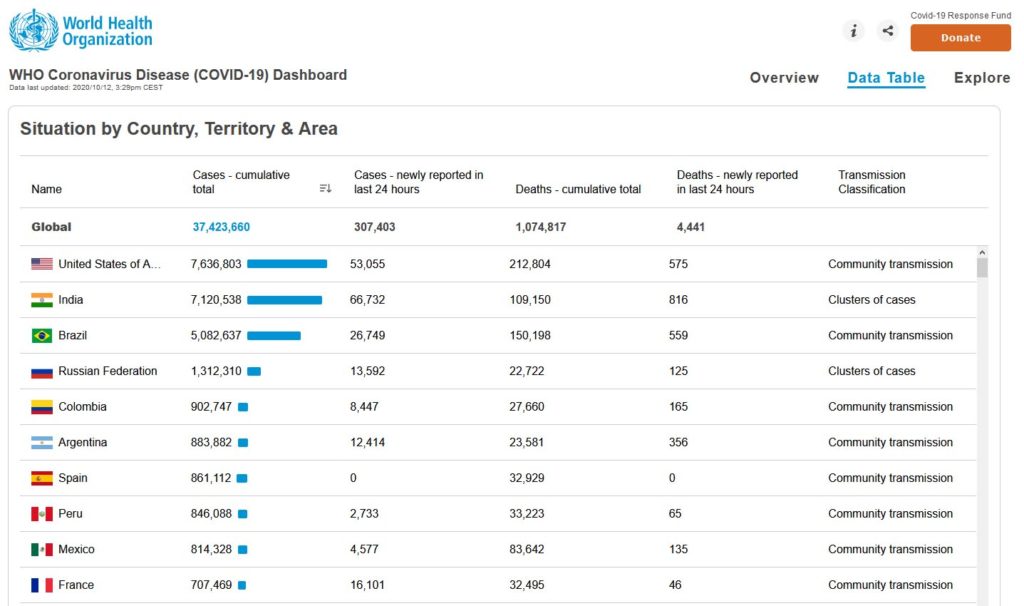 While the U.S. leads the world in overall case numbers, when the playing field is leveled to reflect cases per 1 million population, the U.S. moved up to 11th place, leapfrogging Brazil. See the complete interactive table where you can rank countries by any of the various metrics here.

Taken by region, the Americas daily case gain shot up dramatically this week, joining Europe and Asia as regions of increasing viral activity. 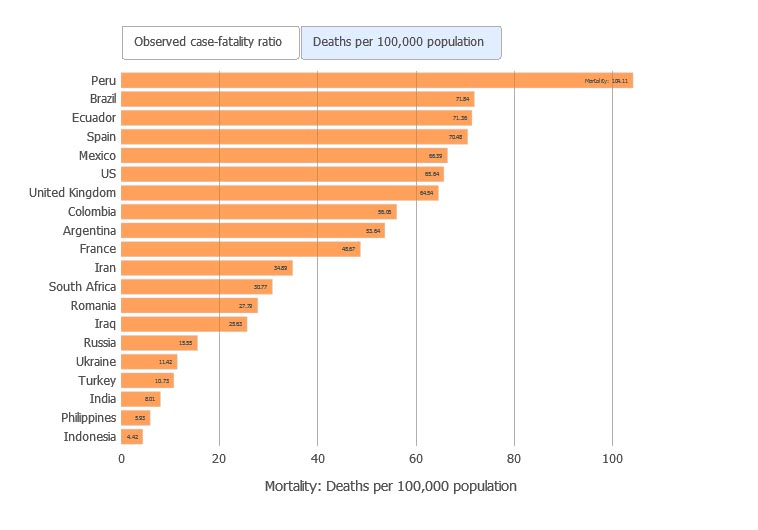 The most recent (Oct. 9) state overview from the Washington Department of Health (DOH) shows confirmed cases at 93,035 with 2,190 deaths, up from 89,874 and 2,142 respectively last week. In addition, testing activity has increased with more than 126,000 new tests administered and tabulated, a gain of almost 30,000 since our last report. 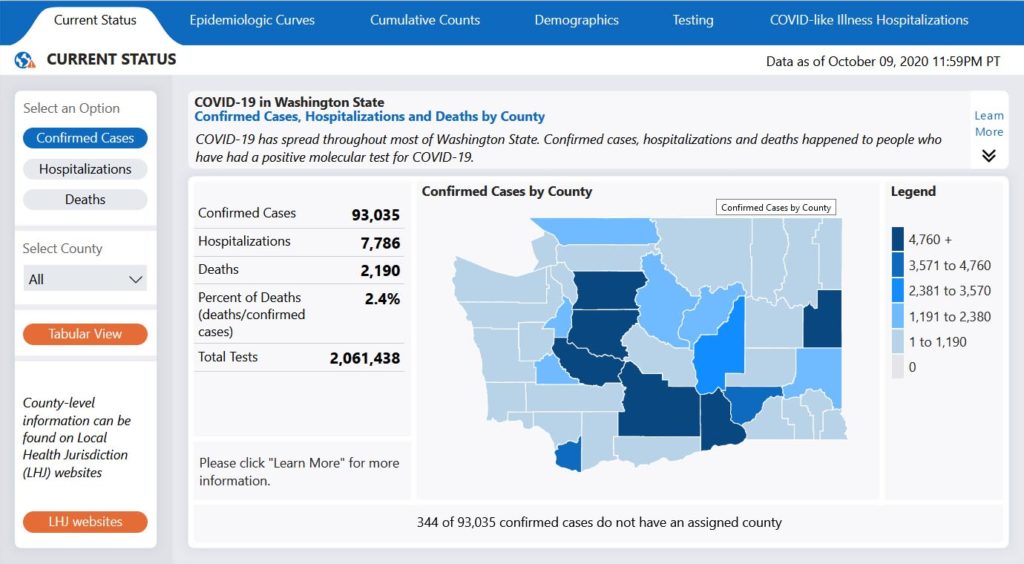 The daily new case count in Washington state appears to be leveling off from the climb begun in mid-September. The most recent count shows 642 new cases on Oct. 9, still well below the July 18 high of 959 (see the interactive chart for Washington state on the Johns Hopkins website here). 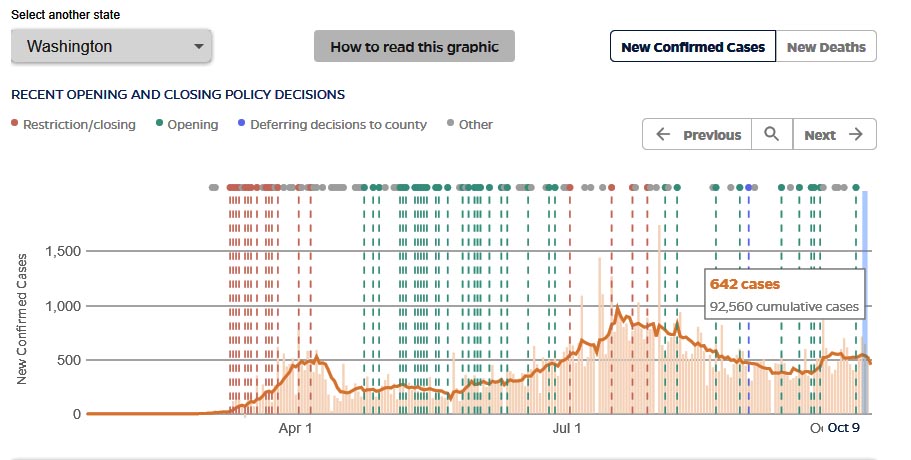 This is not reflected in the Oct. 8 case rate of 84.6 (cases per 100K population, two-week rolling average) which shows an increase of 9.1 percentage points from the previous weeks figure of 75.5, putting the goal of 25 even further out of reach. 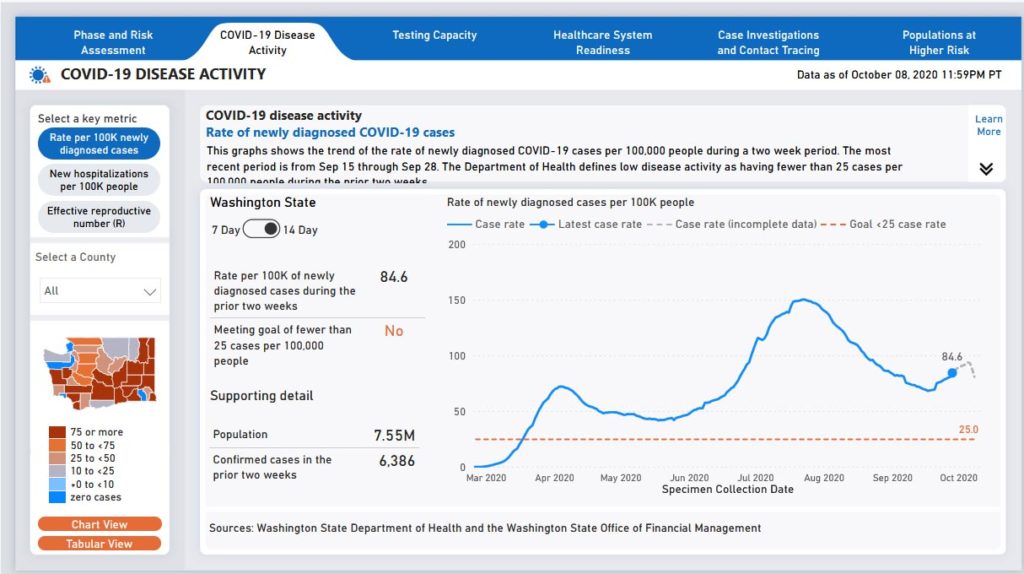 Trends in daily hospitalization and death counts continue with little change from last week. These typically lag behind counts of total caseloads and newly infected individuals, as these patients advance through the course of the disease (note that the hospitalization chart from DOH reflects Oct. 3 data, while the mortality chart from Johns Hopkins includes data through Oct. 2). 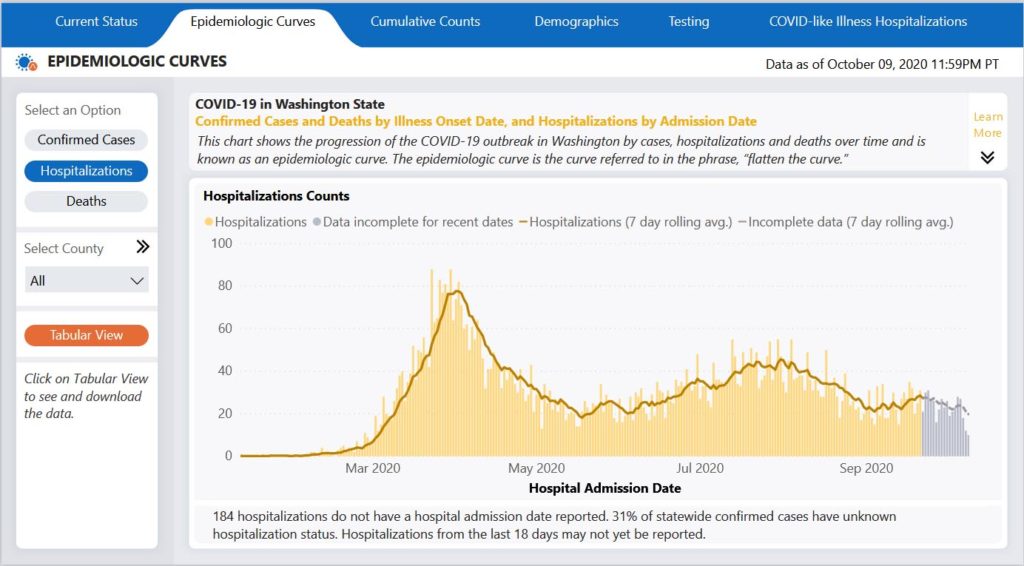 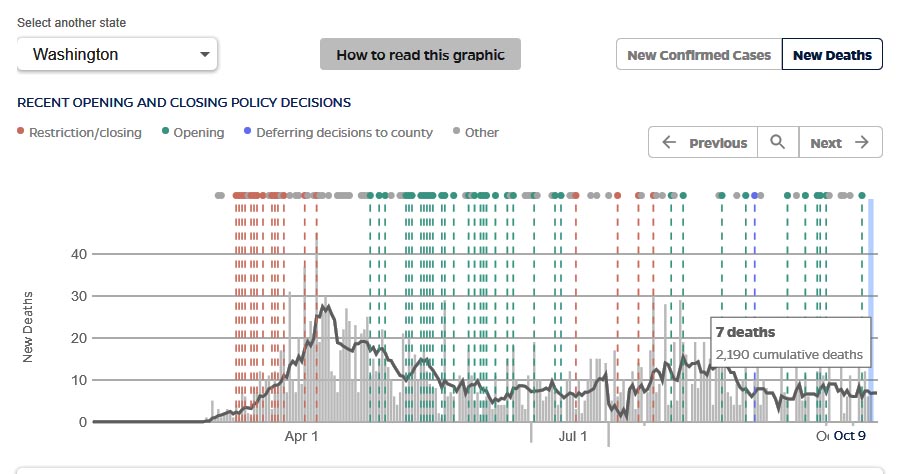 Despite more tests being administered in Washington State (see above), the positivity rate remains at 3.3 percent, unchanged from last week’s report but still short of the 2 percent DOH goal. 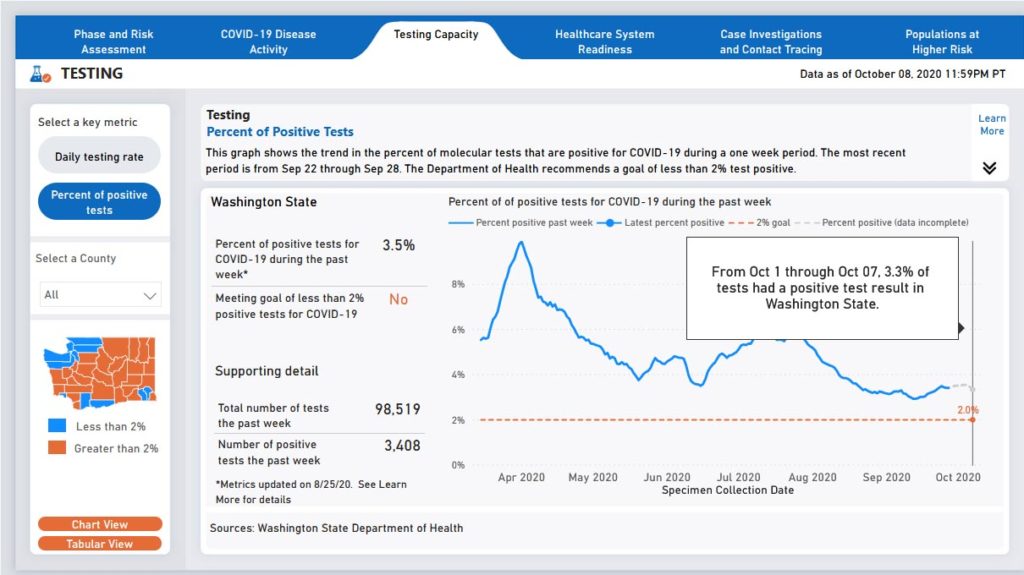 While the underlying numbers have shifted, there has been no change since last week among Washington counties regarding current reopening phases, with Chelan, Douglas, Yakima, Benton and Franklin counties still in modified Phase 1. In our area, Island County continues as the lone county in the northwest quadrant of the state to qualify for Phase 3 reopening. Note that the numbers to the left of the map also reflect this week’s uptick in the two-week rate per 100K of newly diagnosed cases, up to 84.6 from last week’s figure of 75.5. 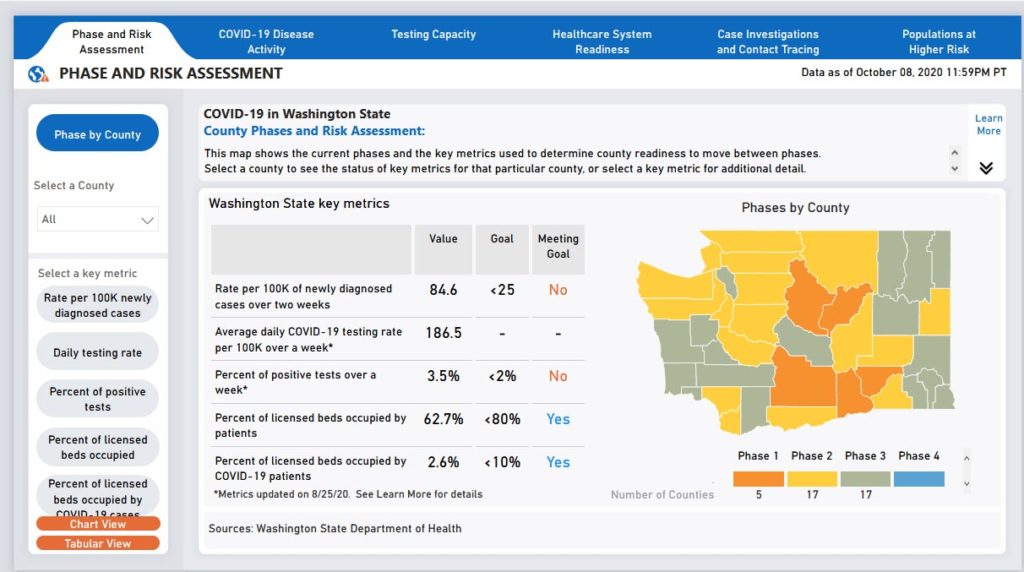 State demographic patterns continue unchanged, with the Oct. 9 report following the familiar pattern of most infections among younger people, and most hospitalizations and deaths in older populations.  Note that more than half the COVID-related deaths occur among those age 80 and older. 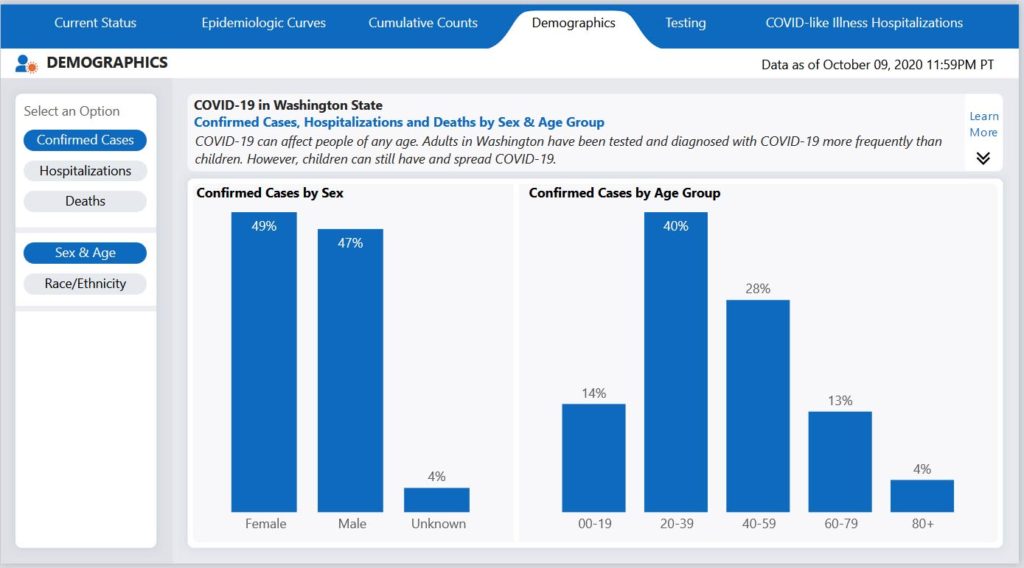 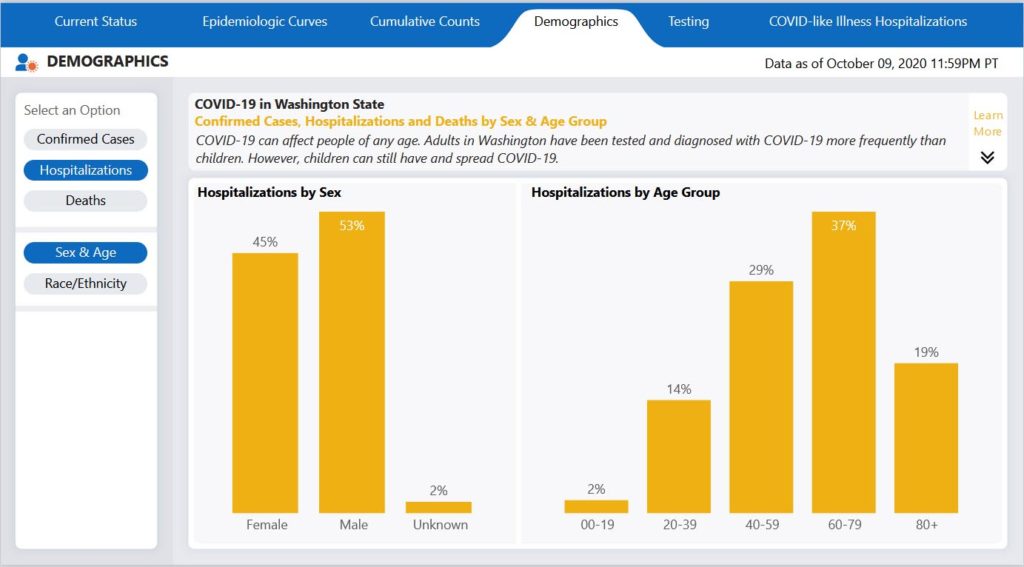 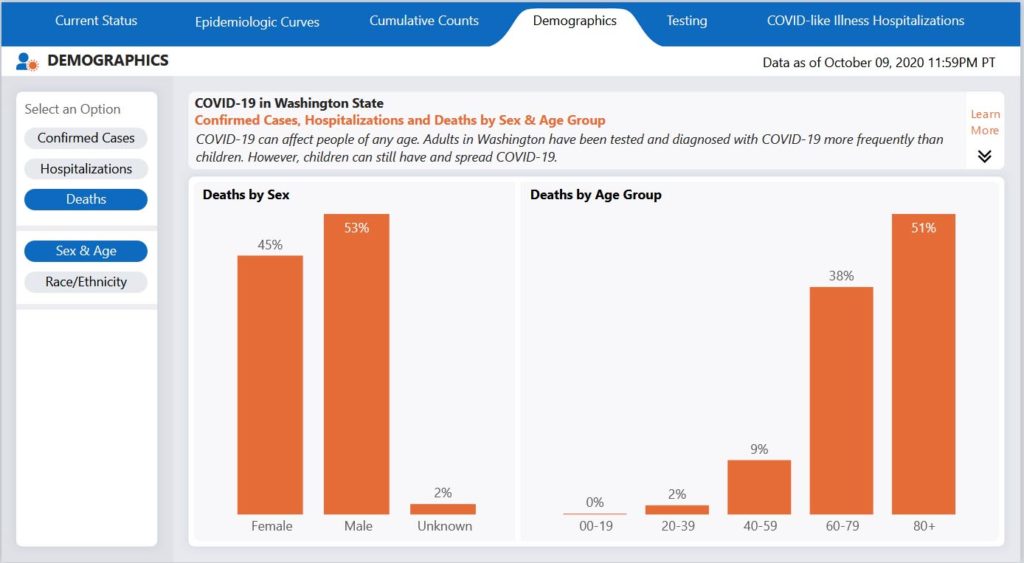 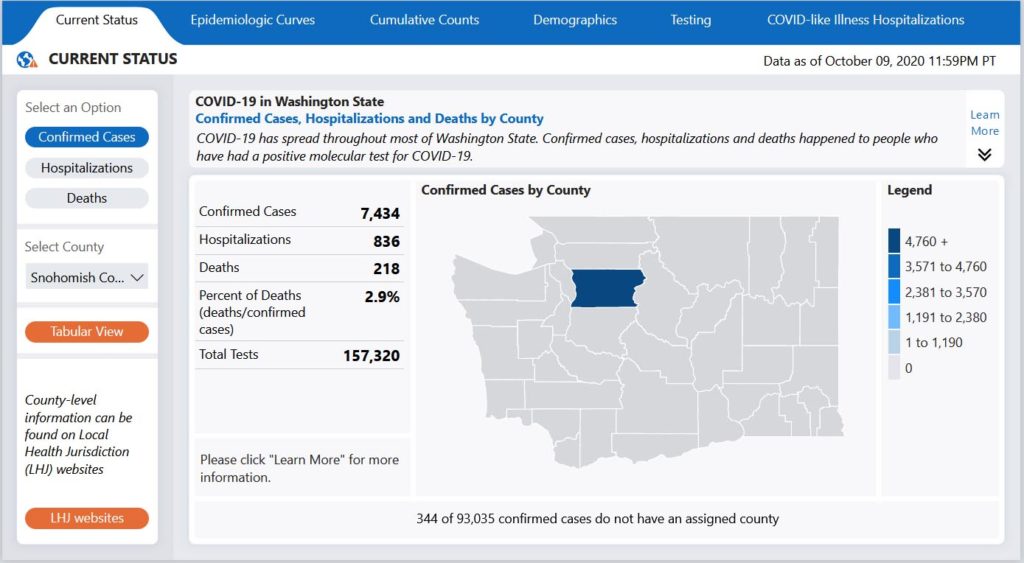 Unlike the state as a whole, where this week’s numbers show some leveling, the Snohomish County daily new case count continues to climb from the early September low point. 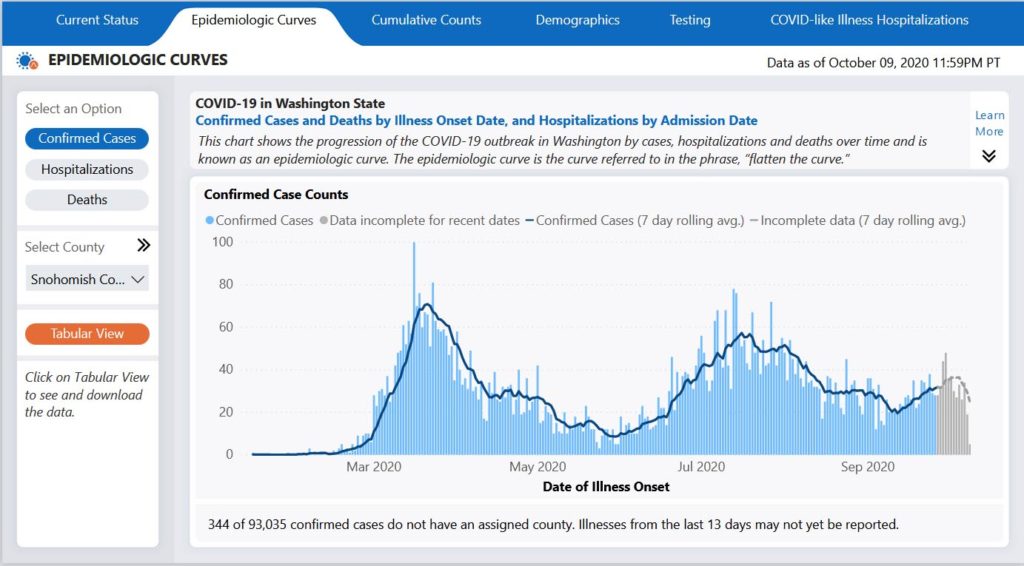 Trends in critical county measures over time (total cases, recovered cases, and active cases) are shown below (these numbers are through Oct. 9). 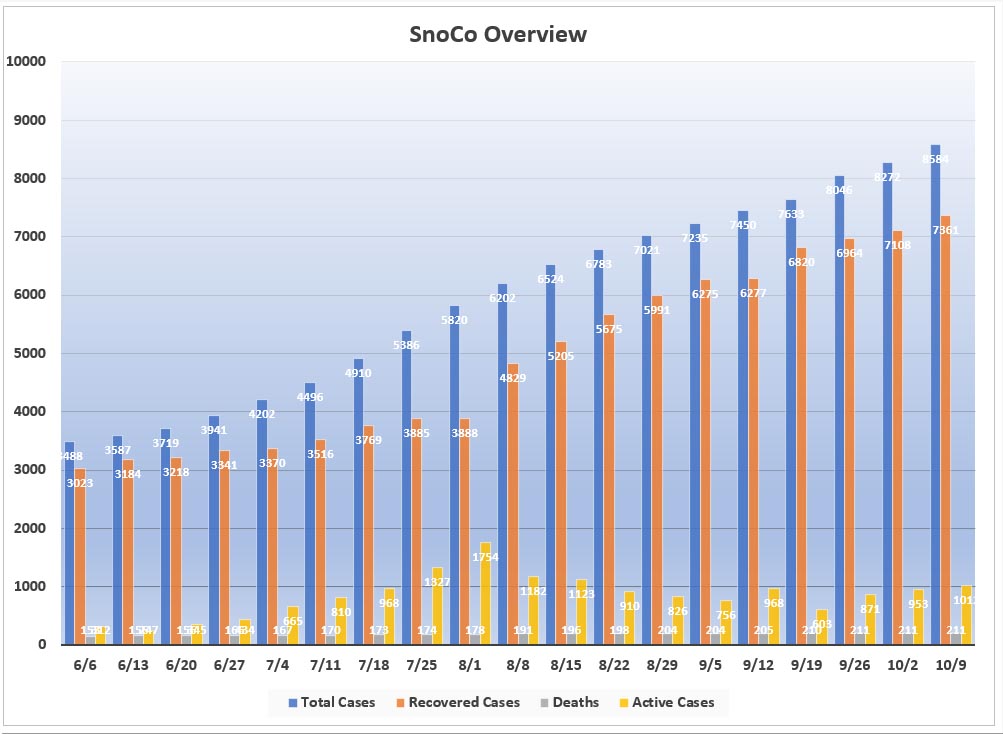 As of Oct. 3, the case rate (cases per 100K population, two-week rolling average) continues to climb, growing to 54.8, up 8.5 percentage points point from the previous week’s level of 46.4 and moving us further from the state goal of 25. 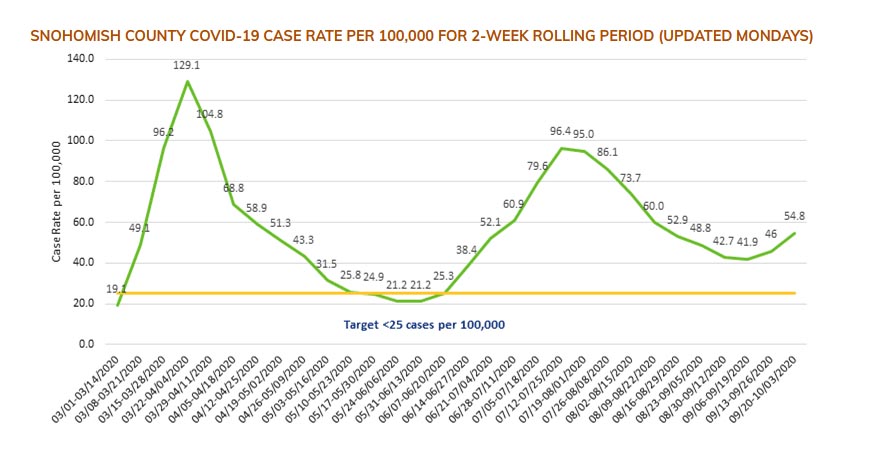 Deaths at the county level continue to show little change from last week, reflecting the statewide trends (compare these tables with the charts posted above). 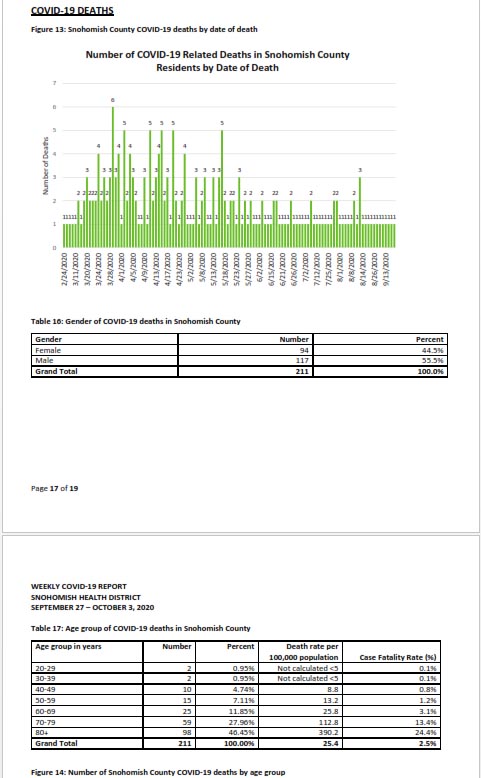 The testing activity table and chart below reflect and compare overall counts with numbers of positive results through Oct. 3.  Note that the positivity rate in the county jumped up eight- tenths of a percentage point to 4 (4.1 on the line chart), moving us further from the state goal of 2. 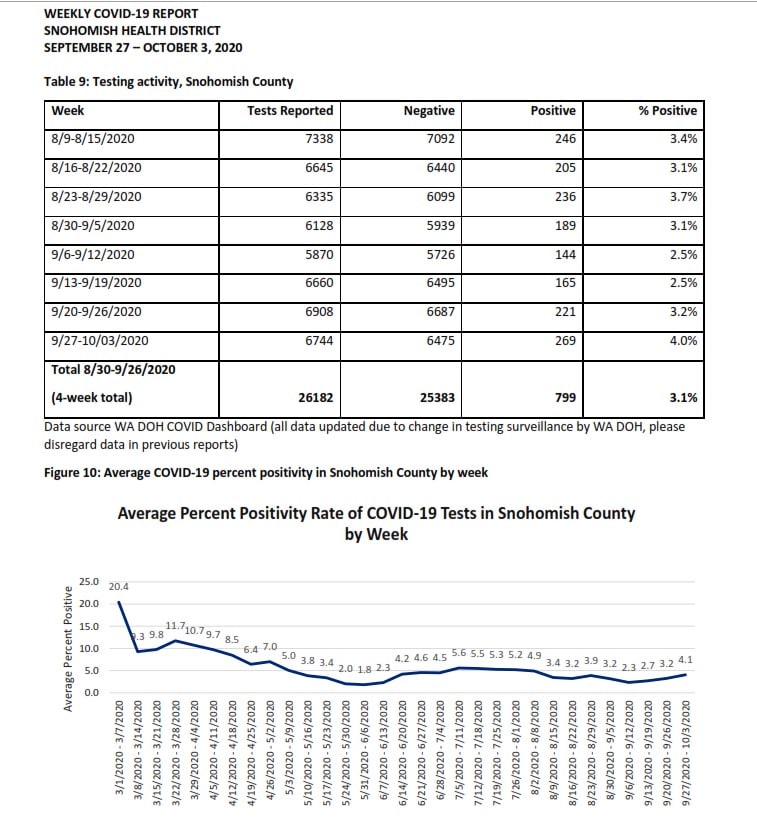 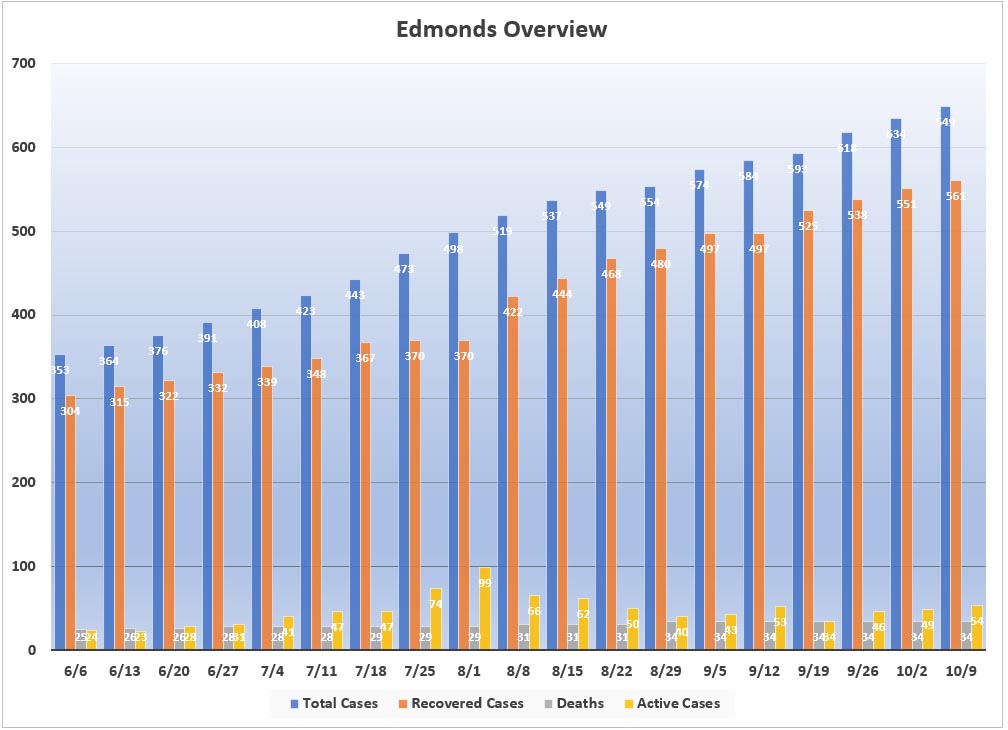 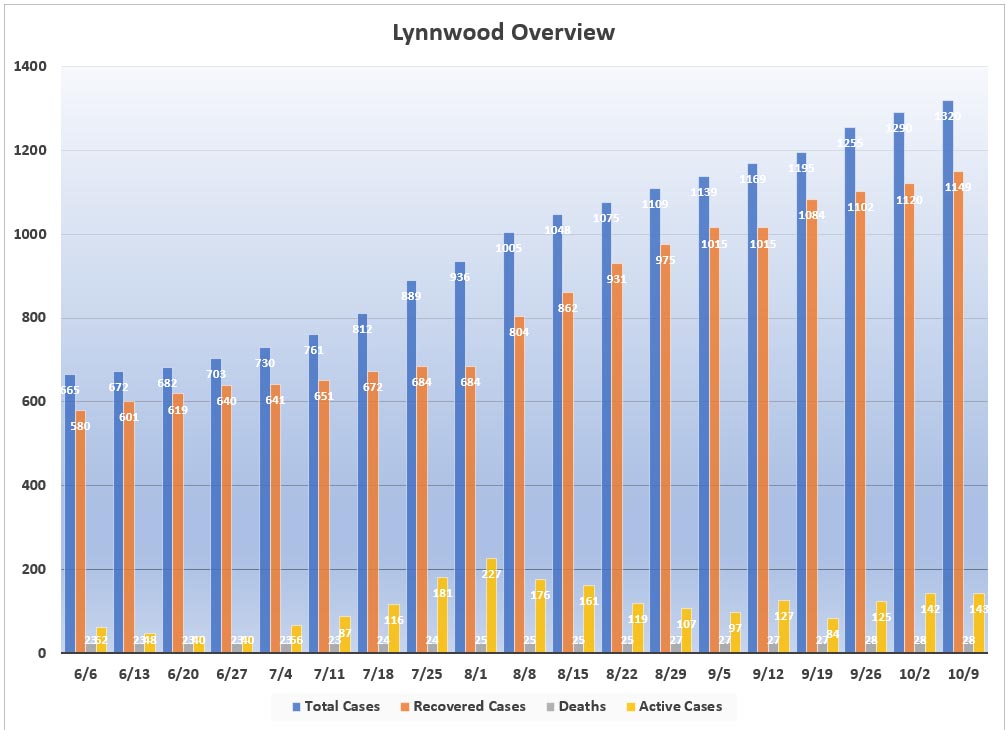 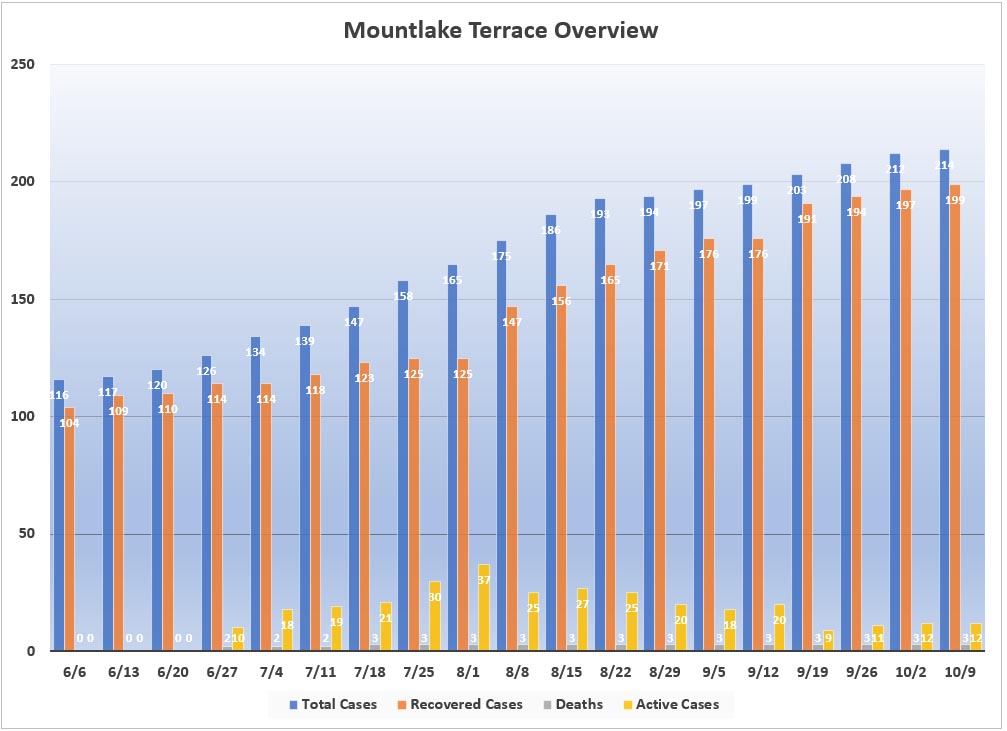