Each week we scour the internet to collect the latest information on the COVID battle from global to local levels. Our aim is to provide you – our readers – with a one-stop-shop to gain a comprehensive overview of progress in fighting the pandemic at all levels.

With critical metrics rising on all fronts, experts are warning to brace for a possible “third peak” of COVID activity as we enter the fall season. According to recent data reported by Johns Hopkins University, the U.S. is averaging more than 55,000 new cases per day, at least 27 states (including Washington) are showing an upward trend in the number of cases reported, ten states hit their highest single-day case counts on Friday, and intensive care units are filling up in several states.

Complicating the situation for Americans, as the U.S. presidential race enters the homestretch the opposing political camps are aggressively pushing vastly different views of the COVID situation, leaving many wondering whom to believe and what safety precautions (if any) to take. In addition, many Americans are increasingly beset with “COVID fatigue,” the growing frustration prompting them to relax efforts at masking and social distancing out of a desire to resume normal life, a trend experts suggest is fueling the surge in viral numbers.

To help you, our readers, navigate this sea of information and sort this out for yourselves, here are the latest numbers, charts and statistics from the world to our own backyards.

This week’s global count shows a gain of almost 2.5 million new cases, up from 2.4 million last week and 2.1 million the week before (see our earlier reports for Oct. 12 and Oct. 5 for comparison). The United States continues to lead the world in sheer numbers of cases, surpassing the grim 8 million milestone, ahead of India, Brazil, and Russia in that order, the only other countries with more than a million cases.

Monday’s global overview map and chart from Johns Hopkins reports yet another significant milestone, with global cases topping 40 million. Note that more than 8 million of these – 20%, or one case in five – are in the U.S. alone. Worldwide deaths stand at 1.1 million, with the U.S. (now at more than 219,000) again comprising 20% of the global total.

The most recent tabular display of the top 10 nations from the World Health Organization shows similar numbers, the discrepancies due to the updates being taken in different time zones (WHO is based in Europe, and due to time differences the numbers are approximately 10 hours earlier than Johns Hopkins). 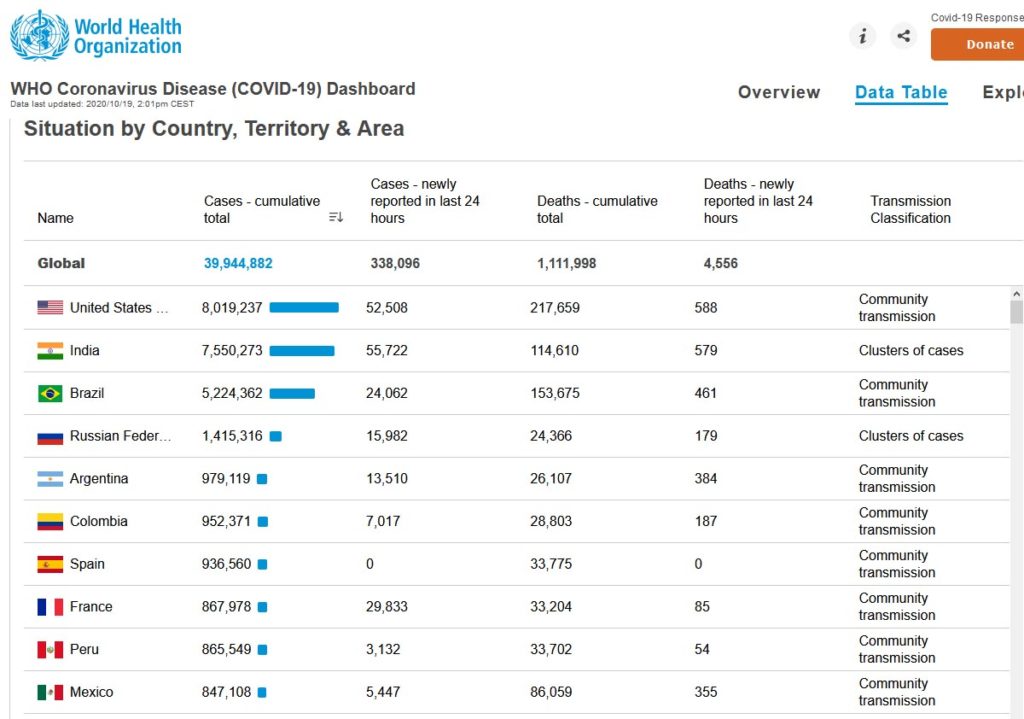 While the U.S. leads the world in overall case numbers, when adjusted to reflect cases per 1 million population, the U.S. moved down to 12th place from 11th last week. See the complete interactive table where you can rank countries by any of the various metrics here. 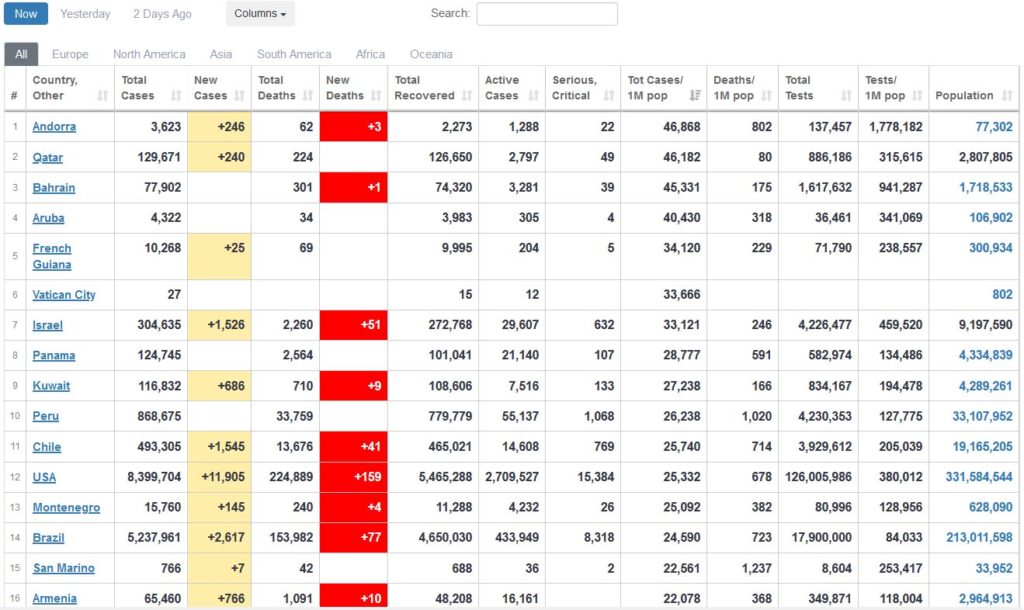 Taken by region, after almost two months of relatively steady new case counts the Americas daily case gain increased for the second week in a row. We now join Europe and Asia as hotspots of surging viral activity. 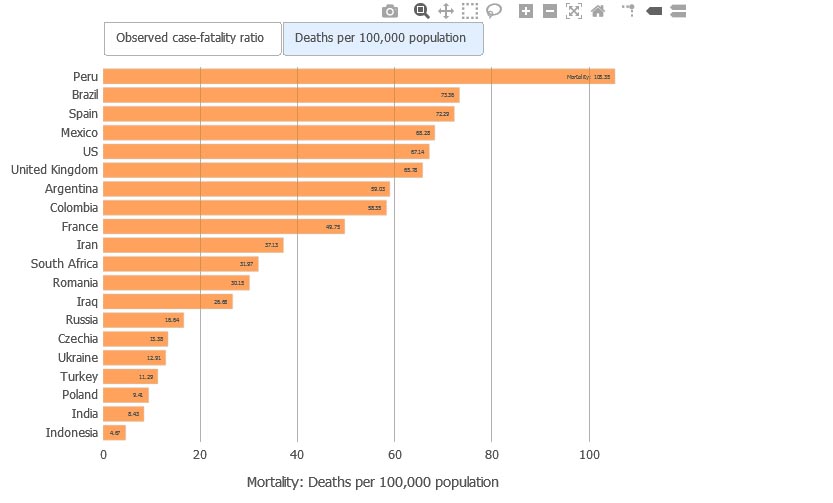 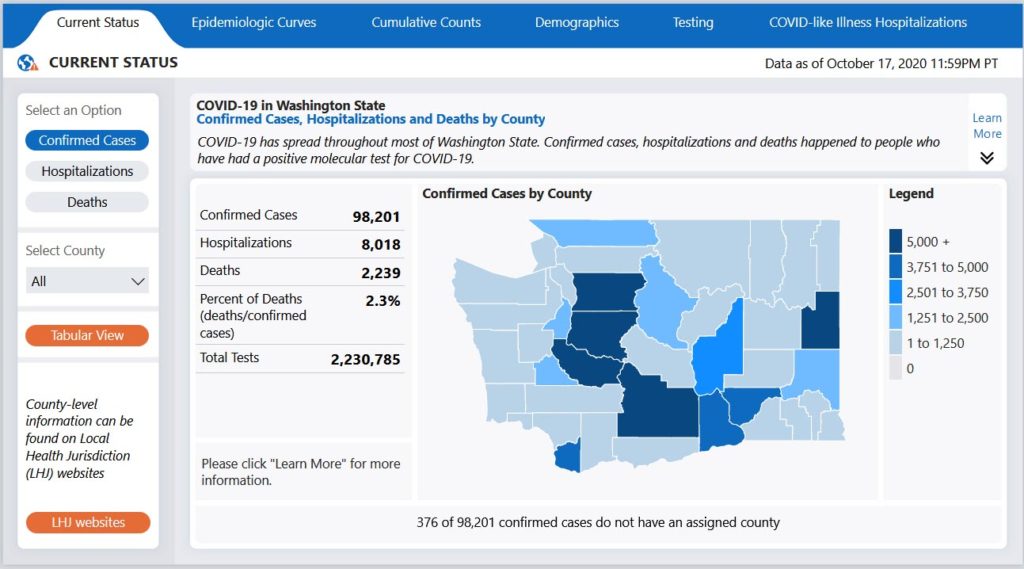 The daily new case count for Washington state is now climbing toward what many fear may be the “third wave,” about which experts have warned. The most recent count shows 777 new cases on Oct. 17, up from 642 the previous week. While this is still well below the July 18 high of 959, it poses a worrying trend (see the interactive chart for Washington state on the Johns Hopkins website here). 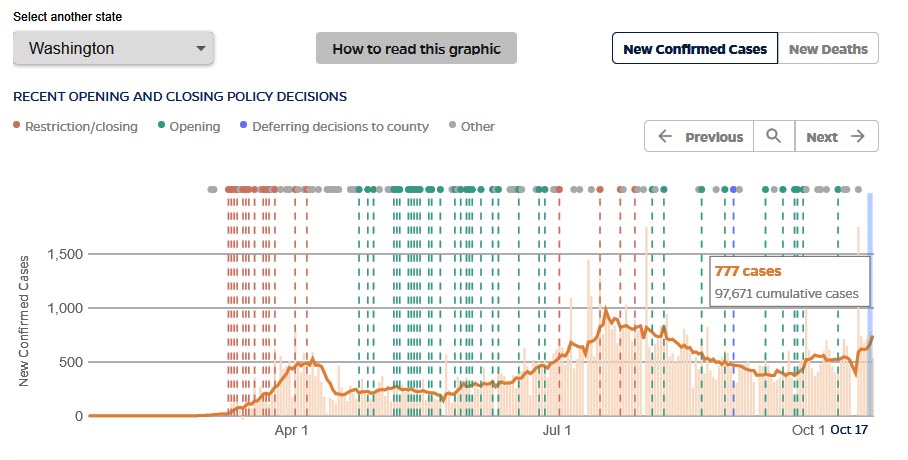 This is reflected in the Oct. 15 case rate of 95.6 (cases per 100K population, two-week rolling average), up 9 percentage points from the previous week’s figure of 84.6 (75.5 the week before), further suggesting that a third wave may indeed be upon us. 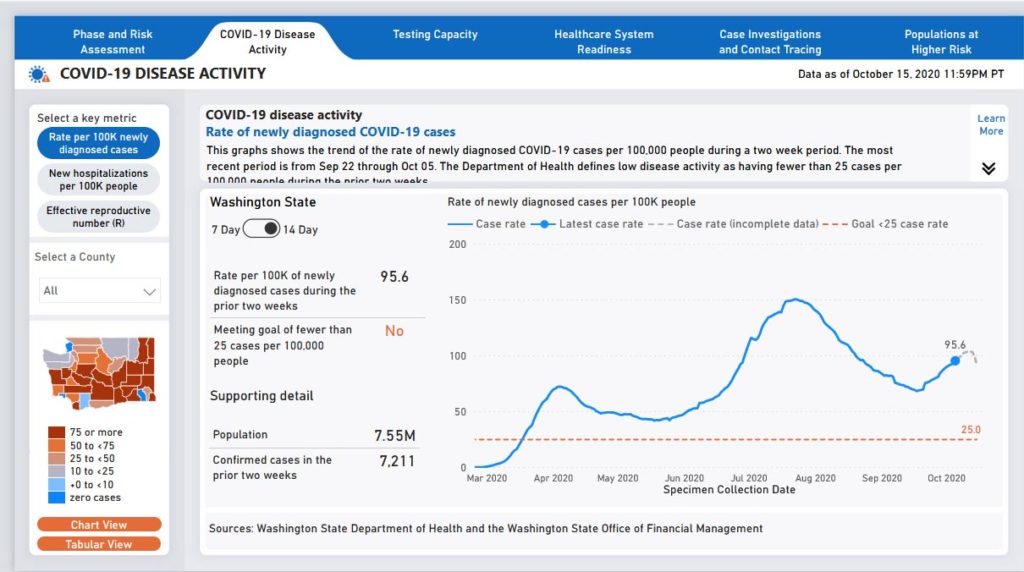 Unlike many states across the nation, trends in Washington state’s daily hospitalization and death counts continue with little change from last week, suggesting that so far we are being spared the brunt of the viral surge. Note that these metrics typically lag behind counts of total caseloads and newly infected individuals, as patients advance through the course of the disease (note that the hospitalization chart from DOH reflects Oct. 17 data, while the mortality chart from Johns Hopkins includes data through Oct. 16). 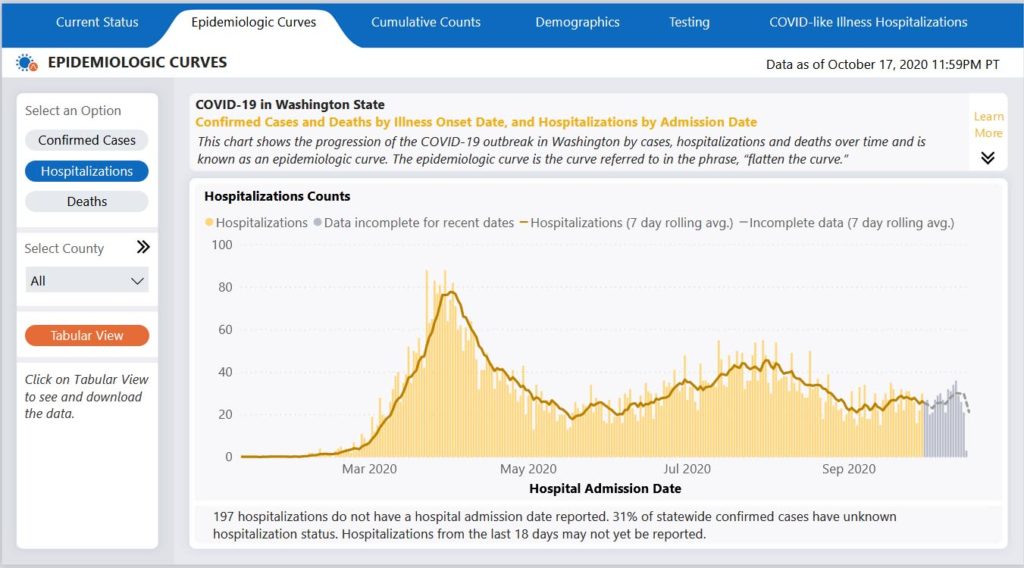 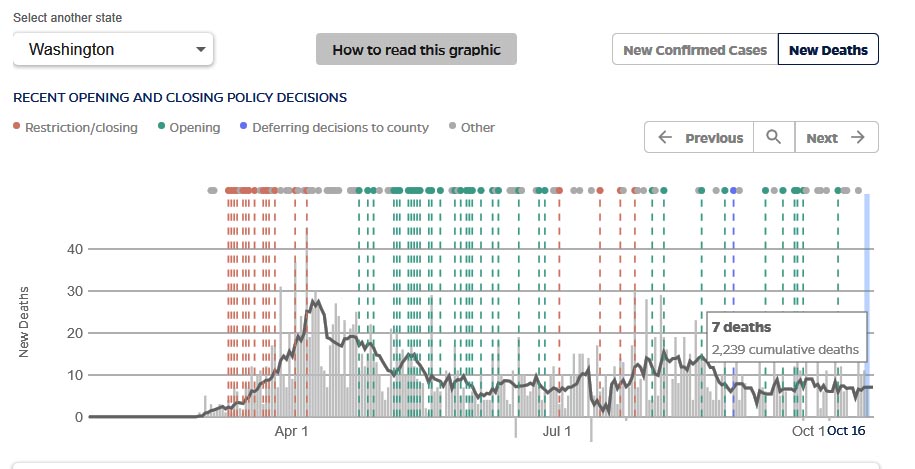 Despite more tests being administered in Washington State (see two charts below), the positivity rate remains fairly constant at 3.4%, up a tenth of a percent from last week but still short of the 2 percent DOH goal. 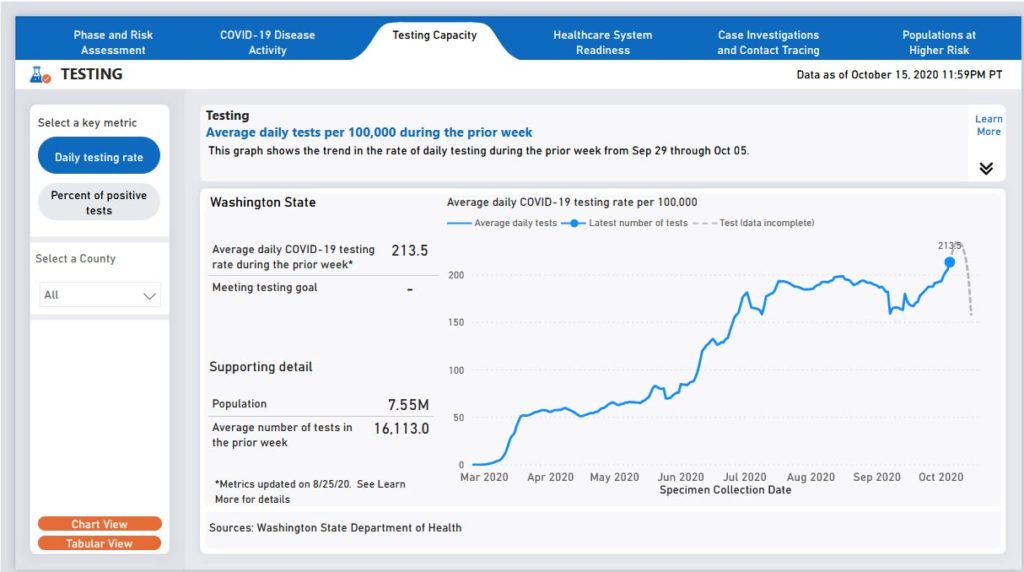 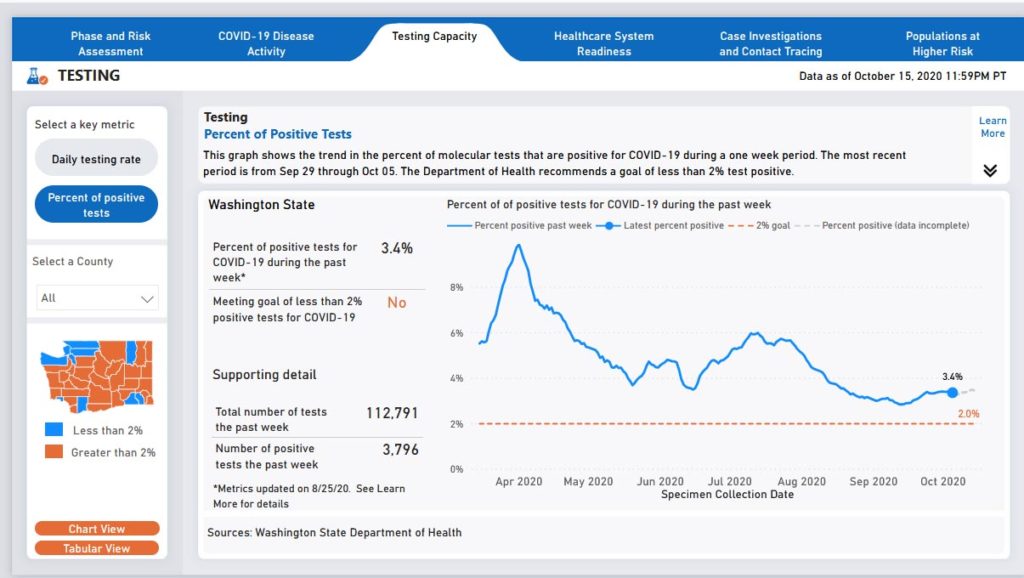 Despite the concerning numbers, this week saw those Washington counties that had remained in Phase 1 move to Phase 2 reopening protocols. No additional counties have qualified for Phase 3. Note that the numbers to the left of the map also reflect this week’s uptick in the two-week rate per 100K of newly diagnosed cases and the increased testing rate. 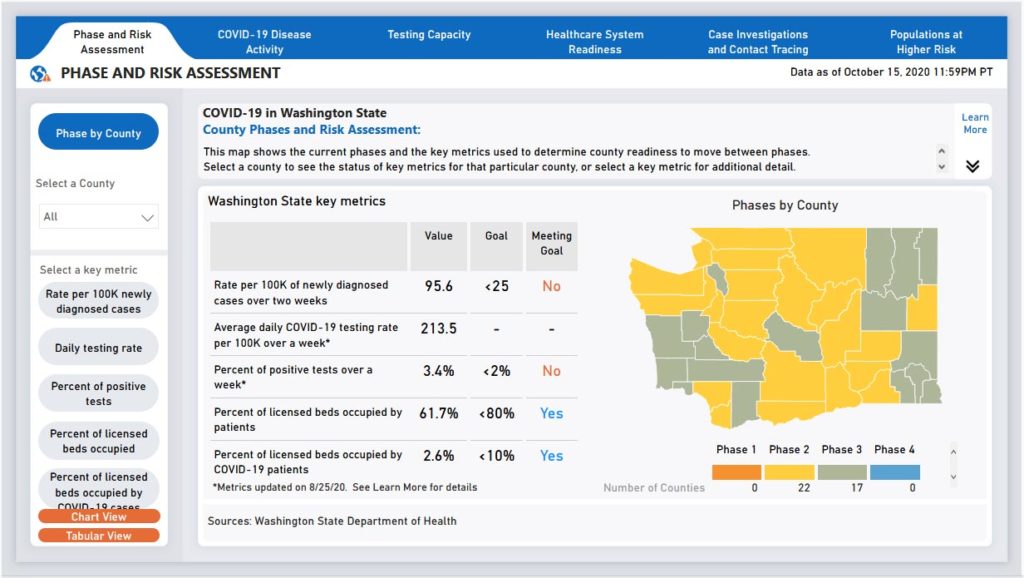 State demographic patterns continue unchanged, with the Oct. 17 report following the familiar pattern of most infections among younger people, and most hospitalizations and deaths in older populations. Note that while those more than 80 years old comprise a mere 4% of cases, this group accounts for more than half the COVID-related deaths. 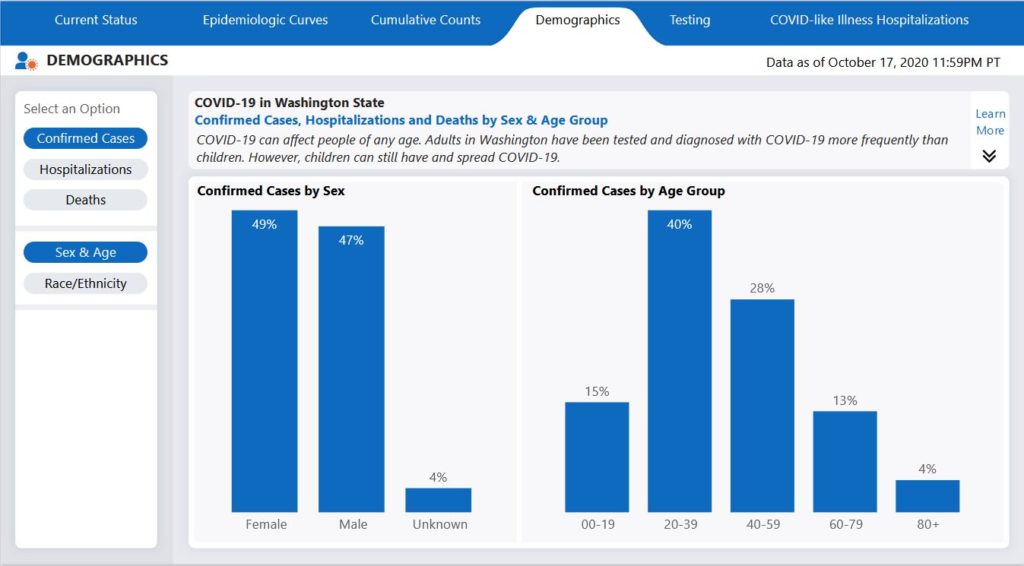 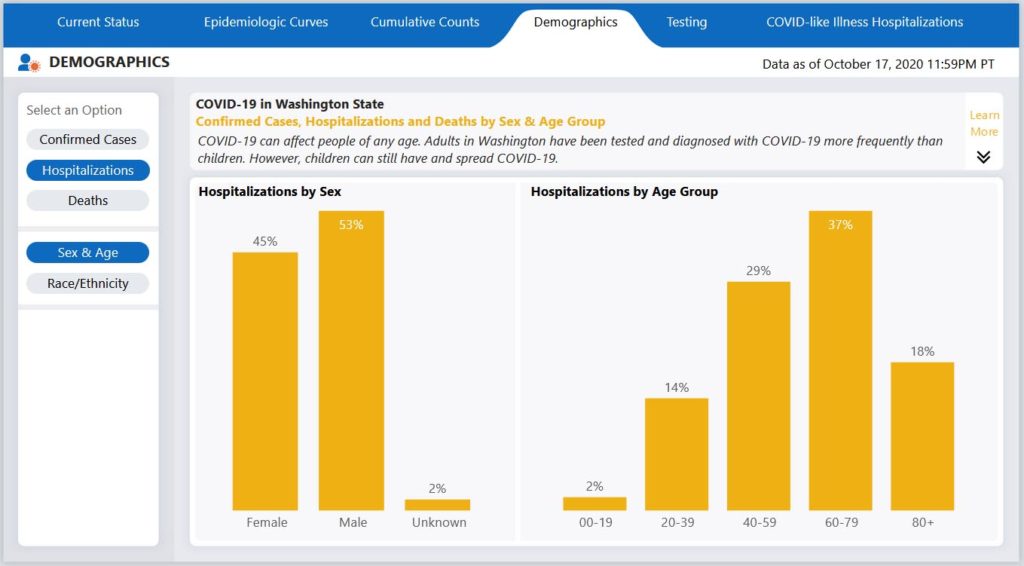 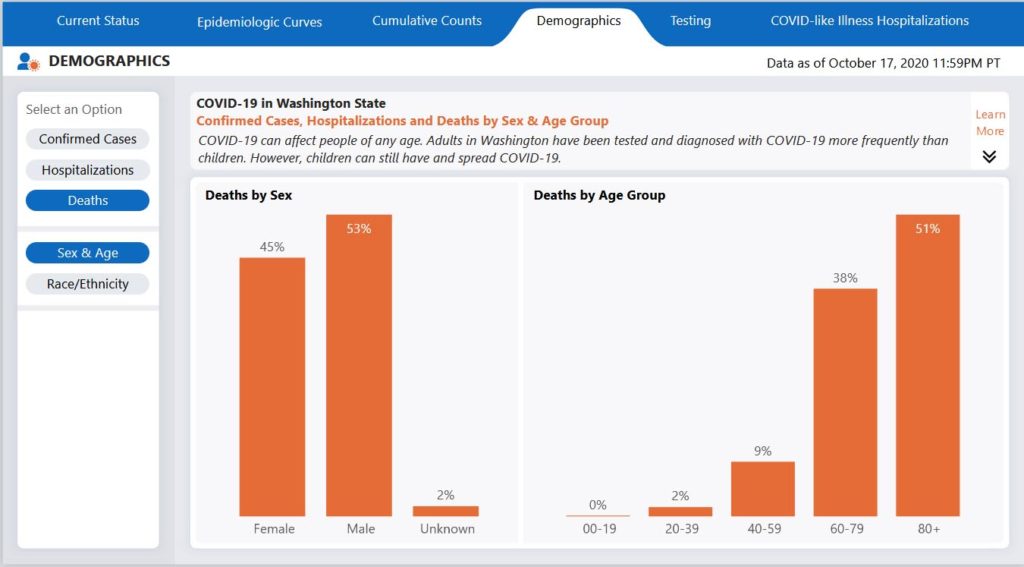 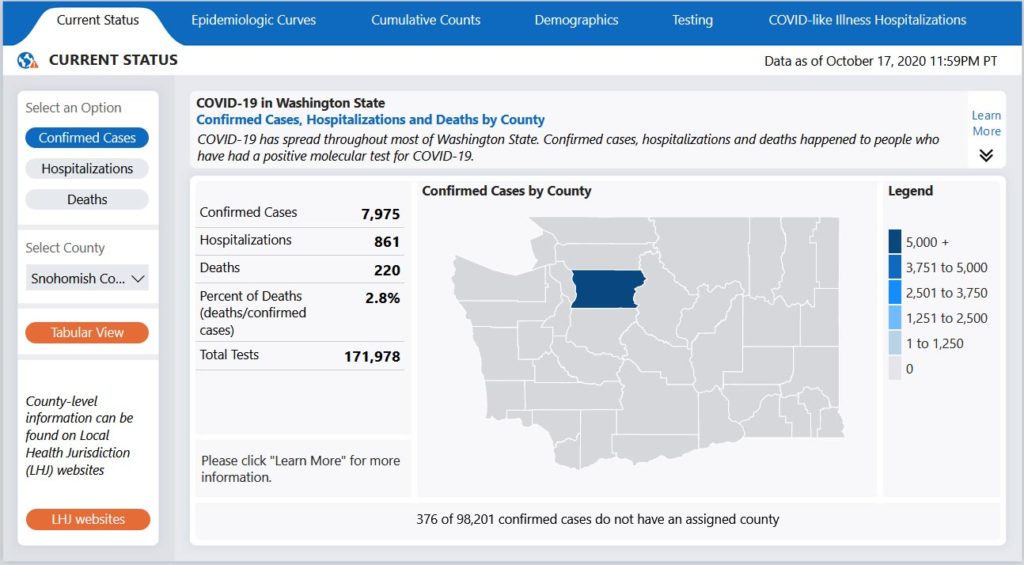 Reflecting the state as a whole, the Snohomish County daily new case count is surging, giving further credence to the notion that we are entering a “third wave” of infection. Note that the grey bars indicate numbers that have not been finalized, and hence do not suggest a decrease in cases. 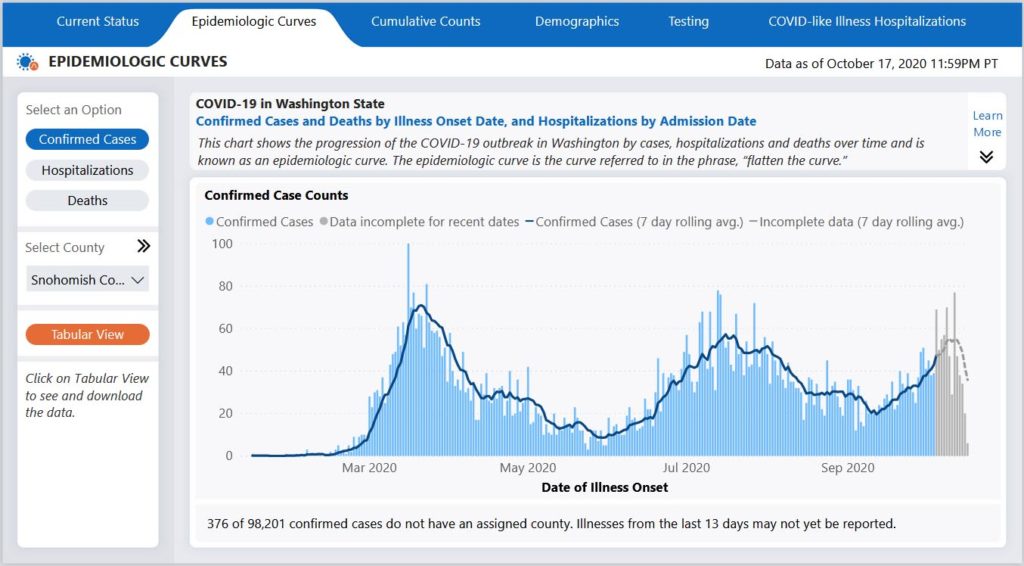 Trends in critical county measures over time (total cases, recovered cases, and active cases) are shown below (these numbers are through Oct. 16). 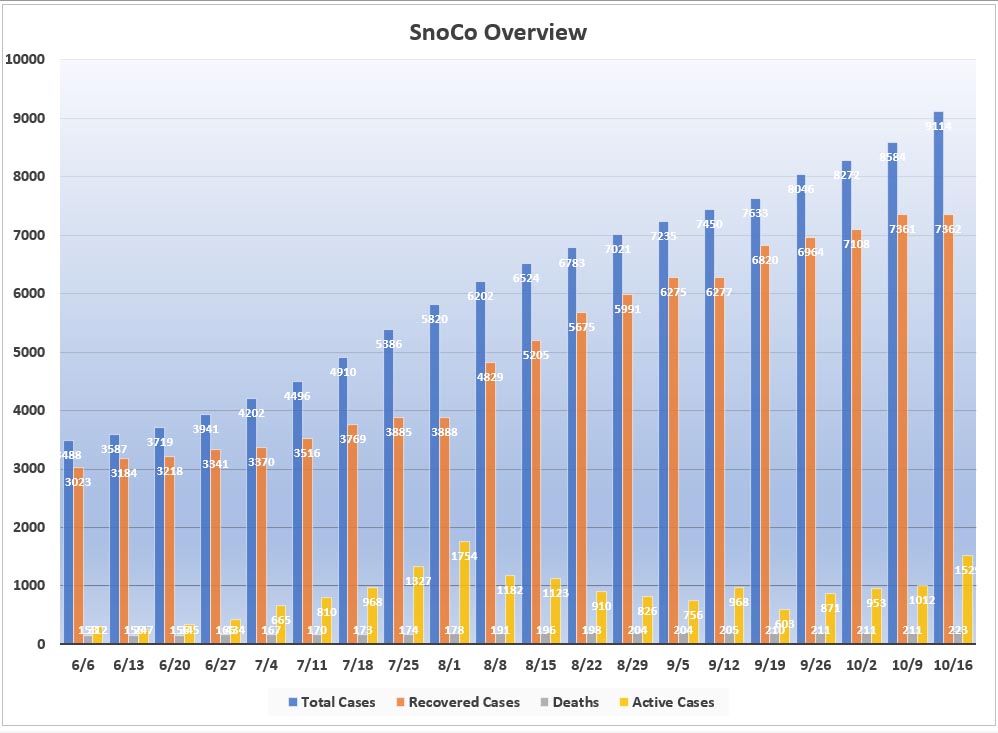 As of Oct. 10, the case rate (cases per 100K population, two-week rolling average) continues to climb, growing to 71.8, surging a full 17 percentage points point from the previous week’s level of 54.8 and putting the state goal of 25 even further out of reach. 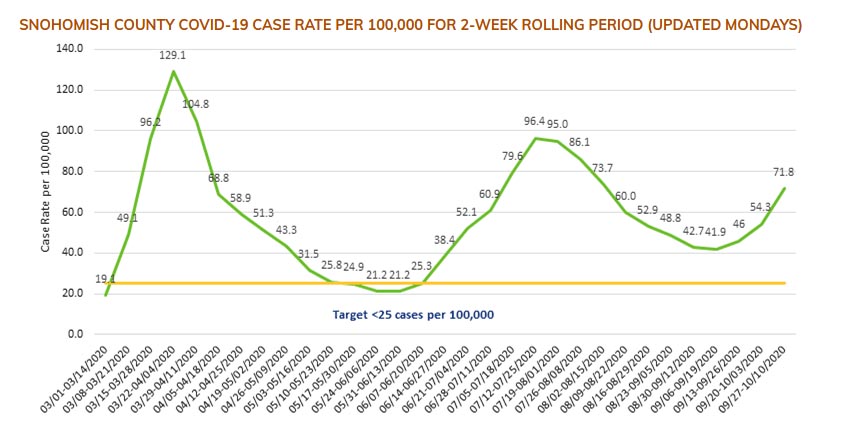 Deaths at the county level are up from last week, but time will tell if it is a trend. (Compare these tables with the charts posted above). 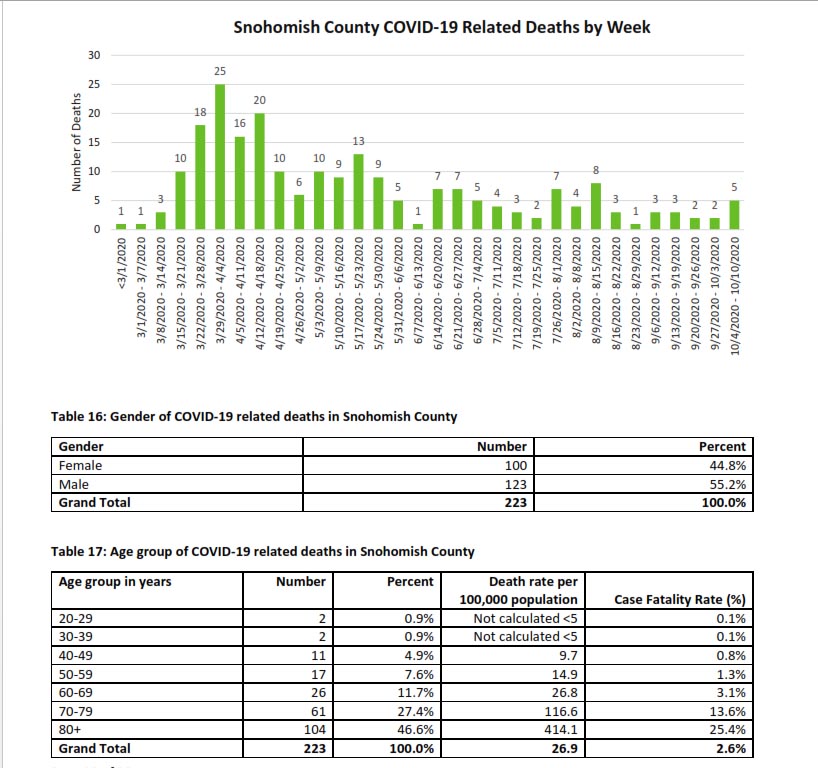 The testing activity table and chart below reflect and compare overall counts with numbers of positive results through Oct. 10. Note that the positivity rate in the county continues the upward trend, jumping six tenths of a percentage point to 4.6, moving us further from the state goal of 2. 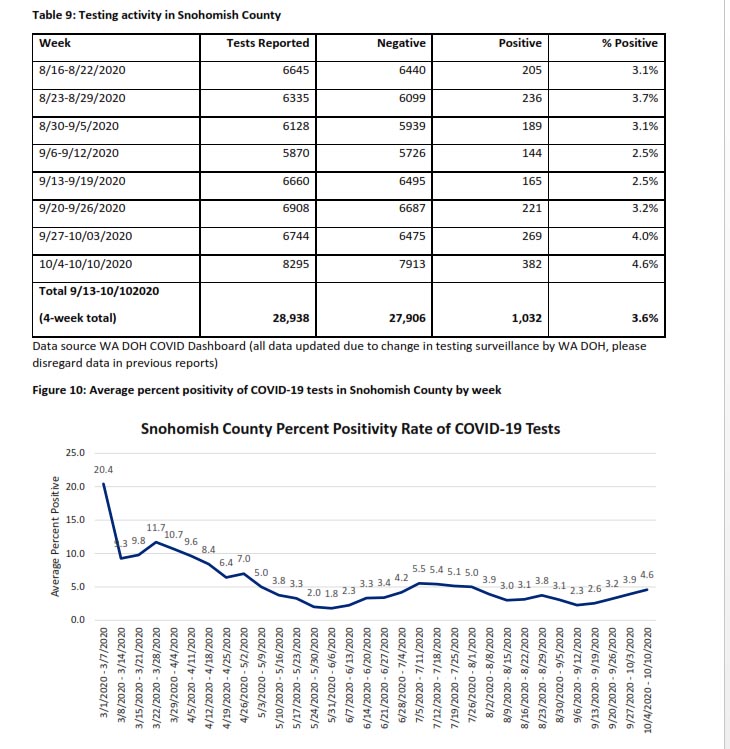 Note: With the exception of death numbers, these data are taken from the most recent updates from the Snohomish County Health District Snapshots and Reports web page.  As data are verified, occasional true-ups are made in the interest of accuracy and these may result in changes to previously posted numbers.  Verified death numbers lag by a week, and are taken from the  COVID-19 Weekly Update report from the Snohomish Health District. Because these are coming from two different sources, where necessary figures have been interpolated for clarity. 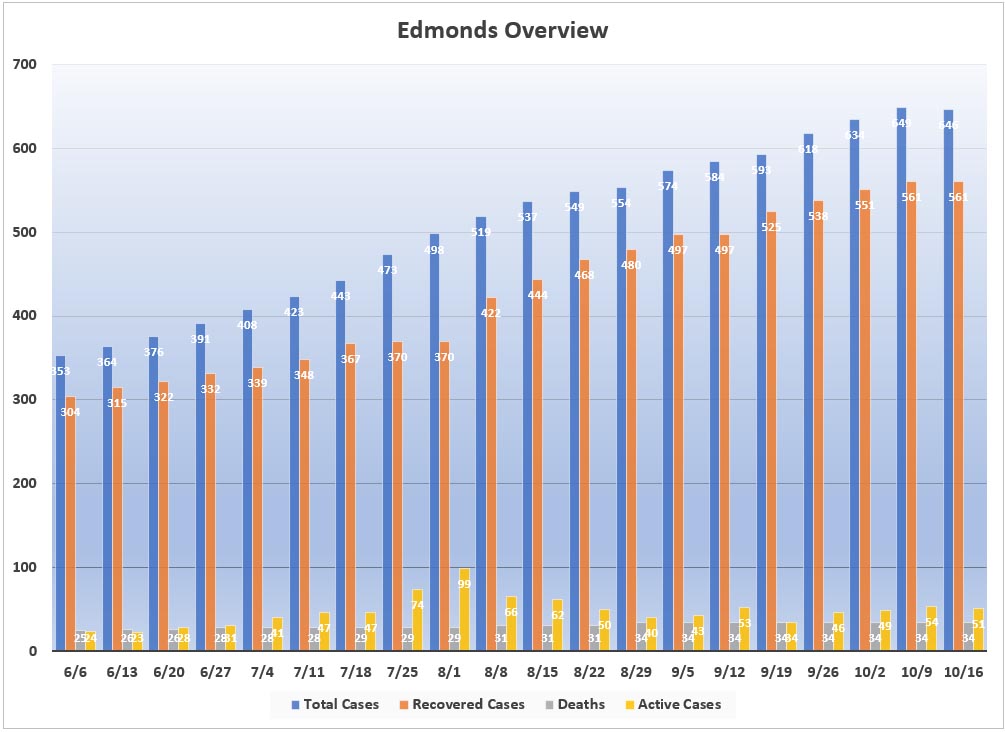 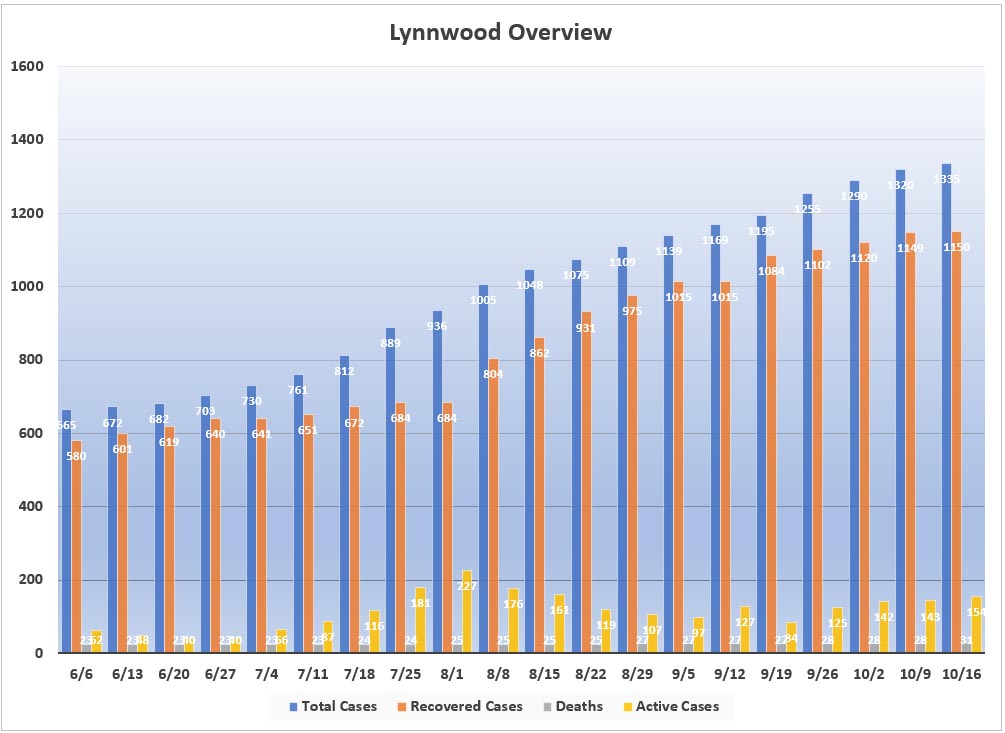 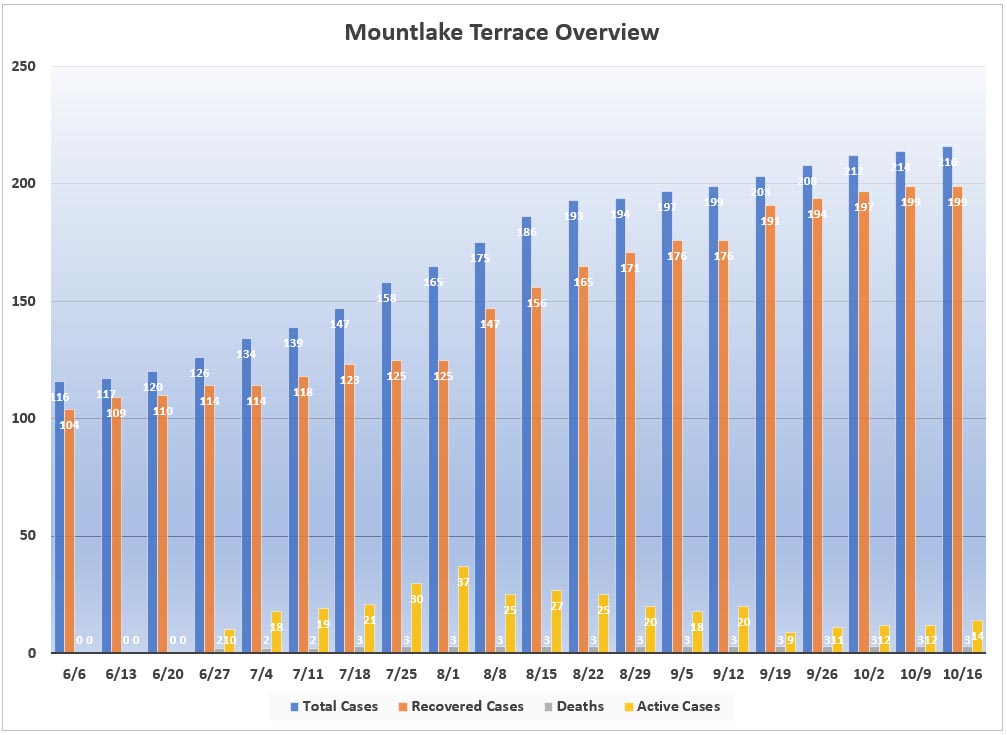