It’s been a week of scant encouragement in the global battle against the spread of the coronavirus as numbers continue to rise across the board. Increasing COVID rates worldwide (Russia this week reported a daily increase of more than 10,000 cases, the highest since mid-May) have prompted officials from New York City to Mumbai to re-impose shutdowns and other restrictions. In addition, the approaching flu season is raising concerns about a potential double hit of infection, prompting health experts to urge early flu shots.

This week’s global count shows a gain of just under 2.1 million new cases, (see our earlier reports for Sept. 28 and Sept. 21 for comparison). Deaths worldwide continue their upward swing, with 39,556 added compared to 37,221 last week and 36,572 the week before.  The United States continues to lead the world in sheer numbers of cases and deaths, ahead of India, Brazil and Russia in that order.

Particularly concerning for Americans, U.S. President Donald Trump joined the growing list of world leaders testing positive and/or displaying symptoms (among those on the list are the UK’s Boris Johnson and Prince Charles, Brazil’s Jair Bolsonaro, and Belarus President Aleksandr Lukashenko). And with the U.S. presidential election only a month away conflicting reports of Mr. Trump’s condition are adding more uncertainty to an already-volatile American election season.

In our area, the Oct. 3 reports show an uptick of new cases in both Washington State and Snohomish County.  Total cases this week for the State and County stand at 89,874 and 7154  respectively, up from 86,269 and 6905 a week ago (see overview maps below in the state and county sections).

But amid all this there is a glimmer of hope in our own backyard.

According to our news partner The Seattle Times, Seattle may have the lowest COVID rate among major U.S. cities. The article quotes health officials who attribute this to our “being serious about social distancing, about hygiene and washing your hands, about wearing face covers, and about getting tested,” and that local leaders are “speaking with a unified voice” rather than sending conflicting messages. 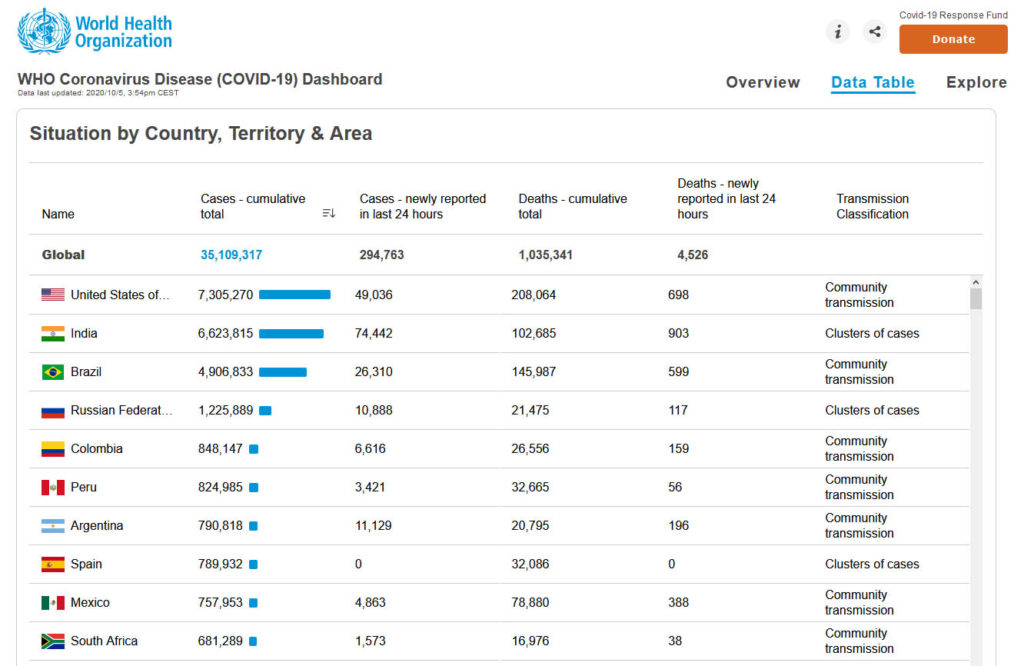 While the U.S. leads the world in overall case numbers, when the playing field is leveled to reflect cases per 1 million population, the U.S. drops to 12th place behind Brazil, whose president Jair Bolsonaro, like U.S. President Trump, has tested positive for the disease. See the complete interactive table where you can rank countries by any of the various metrics here.

Taken by region, Europe and Asia share the distinction of the greatest daily case count increases, while the Americas continue to lead the world in total daily new case counts. 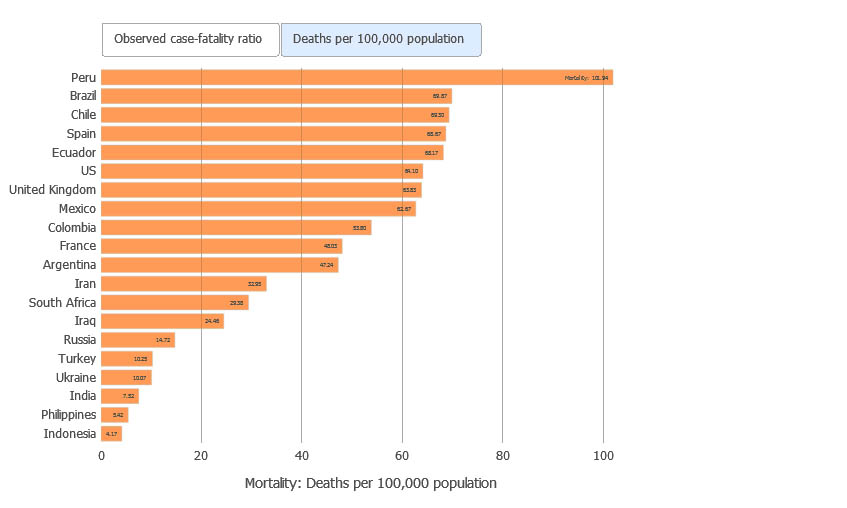 The most recent (Oct. 3) state overview from the Washington Department of Health (DOH) shows confirmed cases at 89,874 with 2,142 deaths, up from 86,269 and 2,100 respectively since last week. In addition, just short of 100,000 new tests were administered and tabulated since our last report. 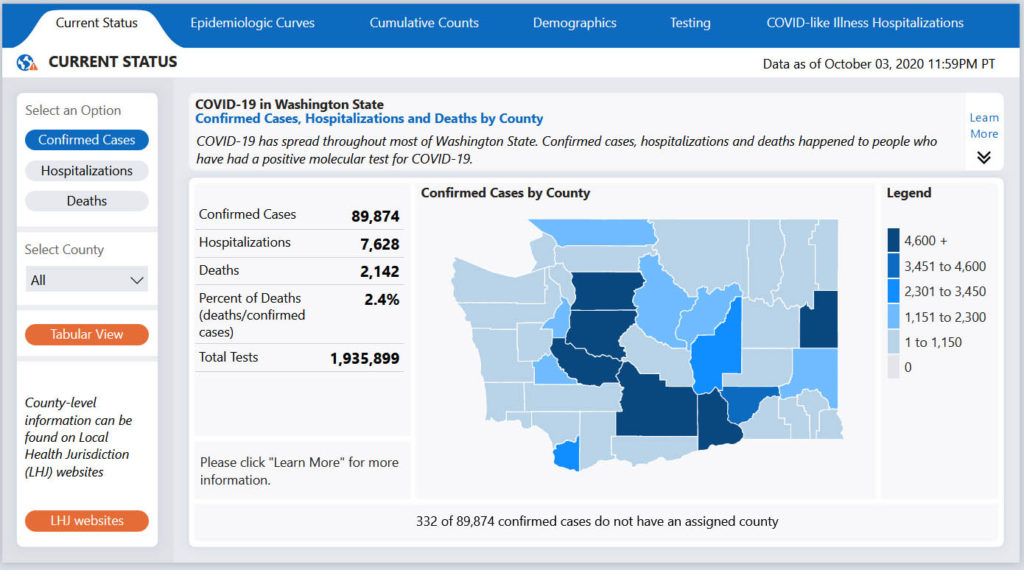 The daily new case count in Washington state continues the climb begun in mid-September. Encouragingly, the past two days suggest that this trend might be reversing, but it is too early to tell whether this is significant or an aberration. On the positive side we are still below the July 18 high of 959 (see the interactive chart for Washington state on the Johns Hopkins website here). 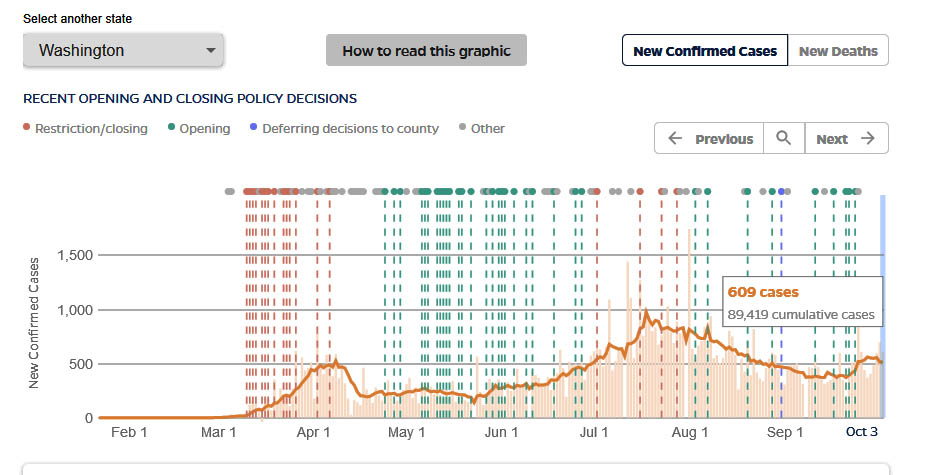 This increase in new cases is also reflected in the Oct. 1 case rate of 75.5 (cases per 100K population, two-week rolling average), an increase of 4.9 percentage points from the previous weeks figure of 70.6, and moving us further from the goal of 25. 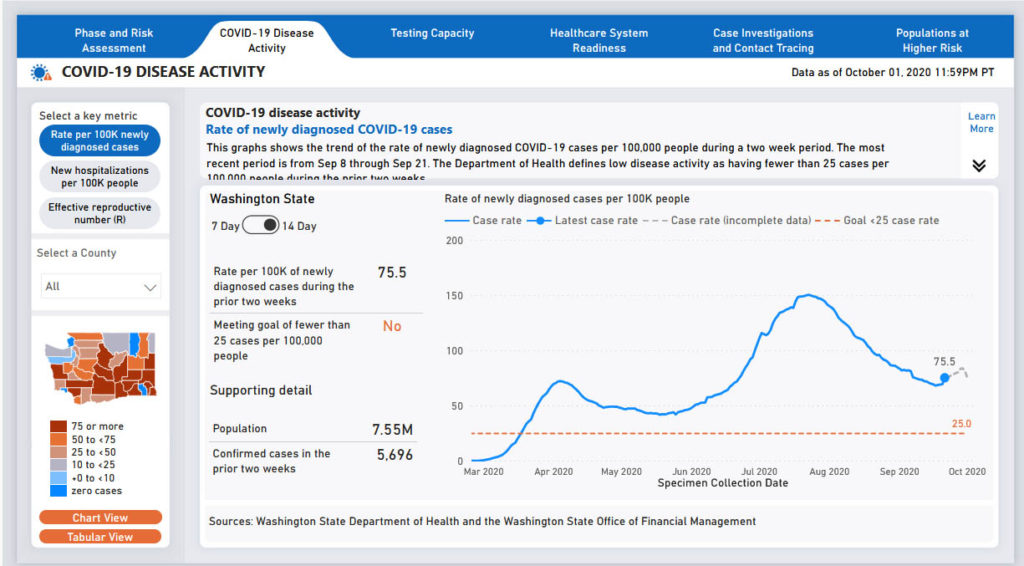 Trends in daily hospitalization and death counts typically lag behind those for total caseload numbers as newly infected individuals advance through the course of the disease, so if past patterns continue we can look for increases here in the coming weeks. This week’s trends continue with little change (note that the hospitalization chart from DOH reflects Oct. 3 data, while the mortality chart from Johns Hopkins includes data through Oct. 2). 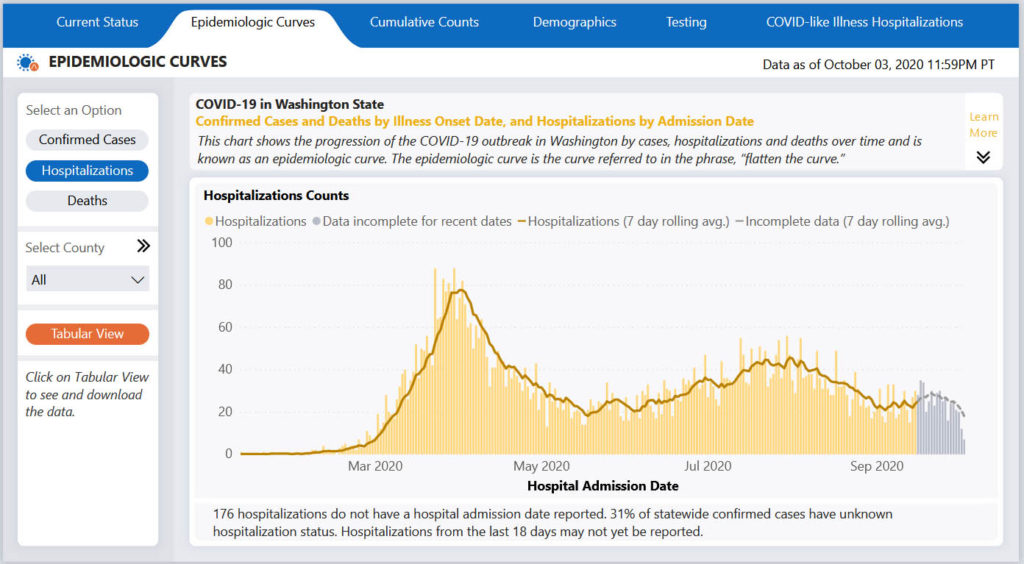 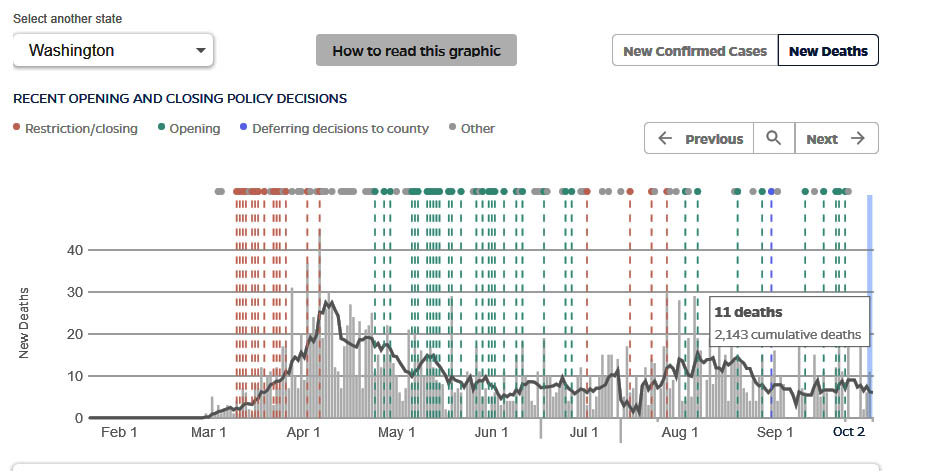 The charts below represent the sixth week of test results reporting under the new DOH protocols. These figures now reflect total testing volumes rather than just the number of new individuals receiving a negative or positive test result for the first time (i.e., if an individual is tested more than once, each test is counted). 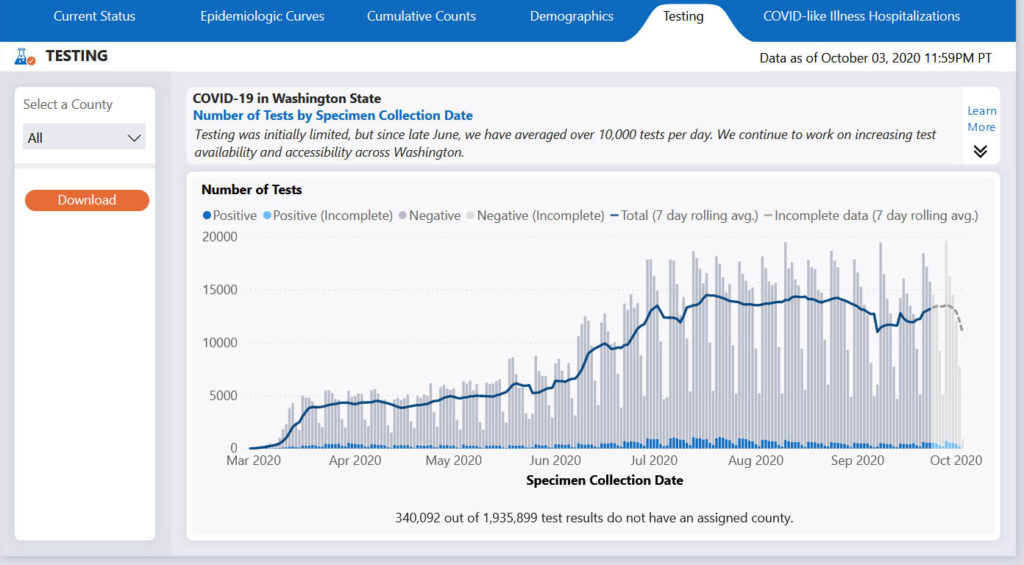 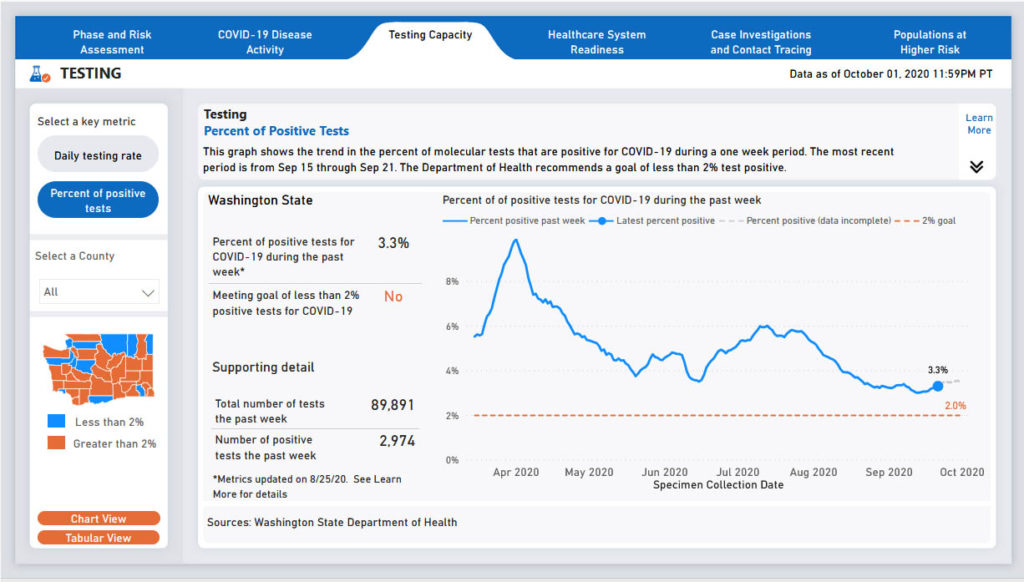 While the underlying numbers have shifted slightly, there has been no change since last week among Washington counties regarding current reopening phases, with Chelan, Douglas, Yakima, Benton and Franklin counties still in modified Phase 1. In our area, Island County continues as the lone county in the northwest quadrant of the state to qualify for Phase 3 reopening. Note that the numbers to the left of the map also reflect this week’s uptick in the 2-week rate per 100K of newly diagnosed cases, up to 75.5 from last week’s figure of 70.6. 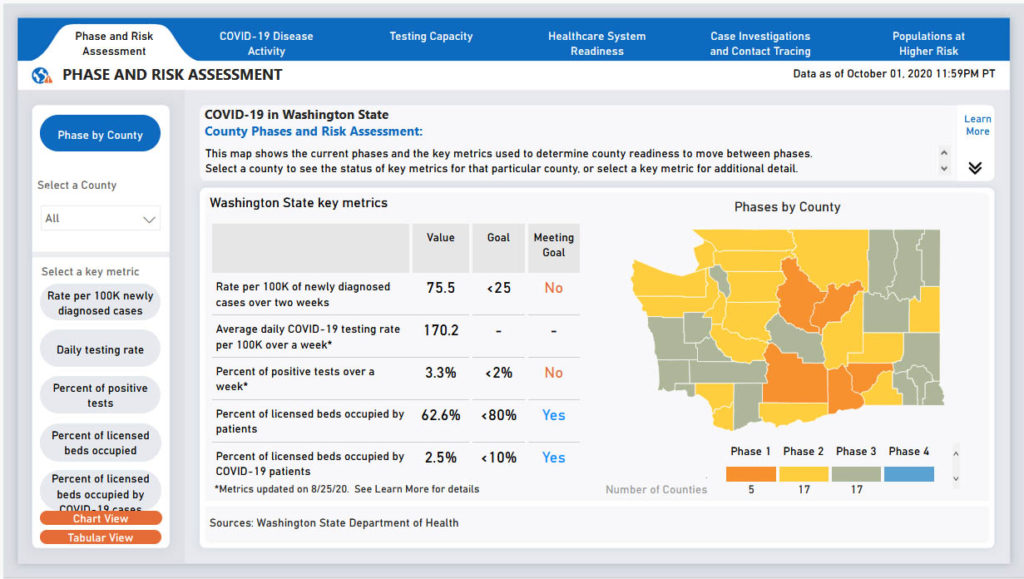 State demographic patterns continue unchanged, with the Oct. 3 report following the familiar pattern of most infections among younger people, and most hospitalizations and deaths in older populations. Note that more than half the COVID-related deaths occur among those age 80 years and older 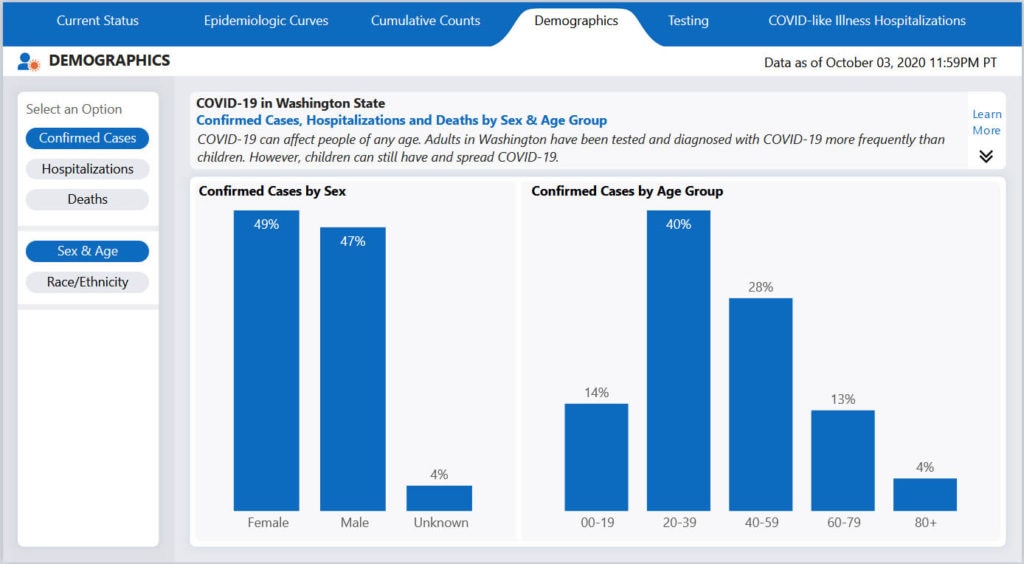 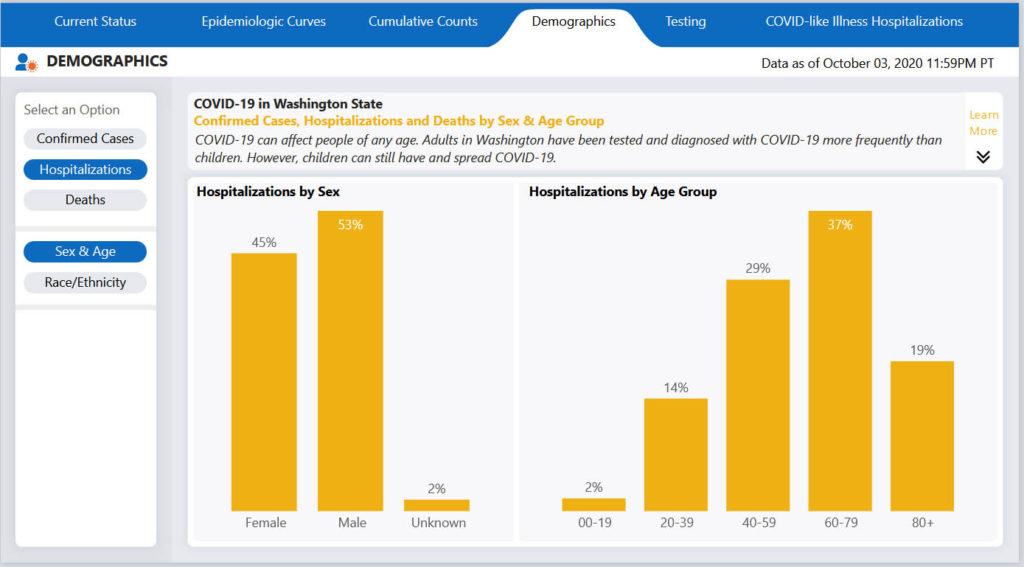 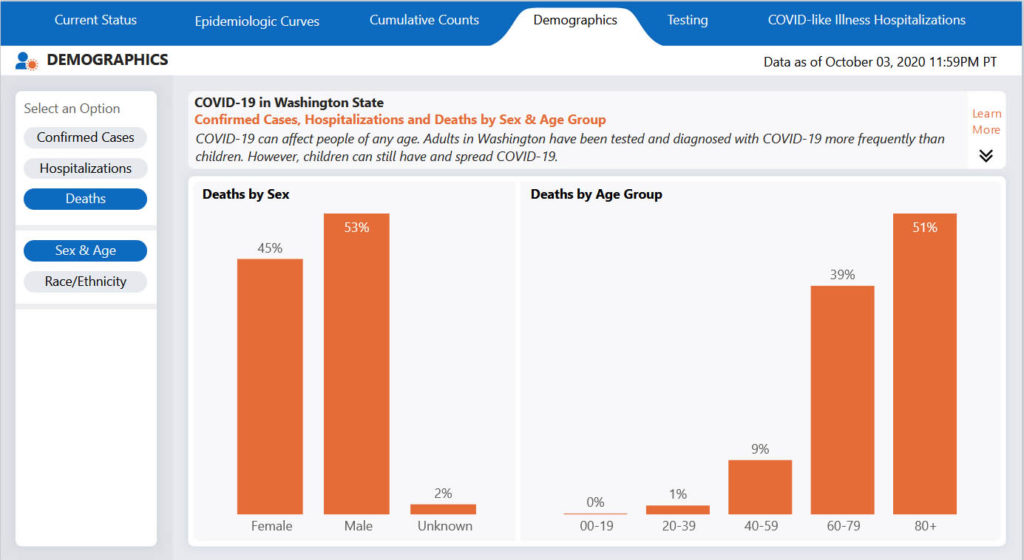 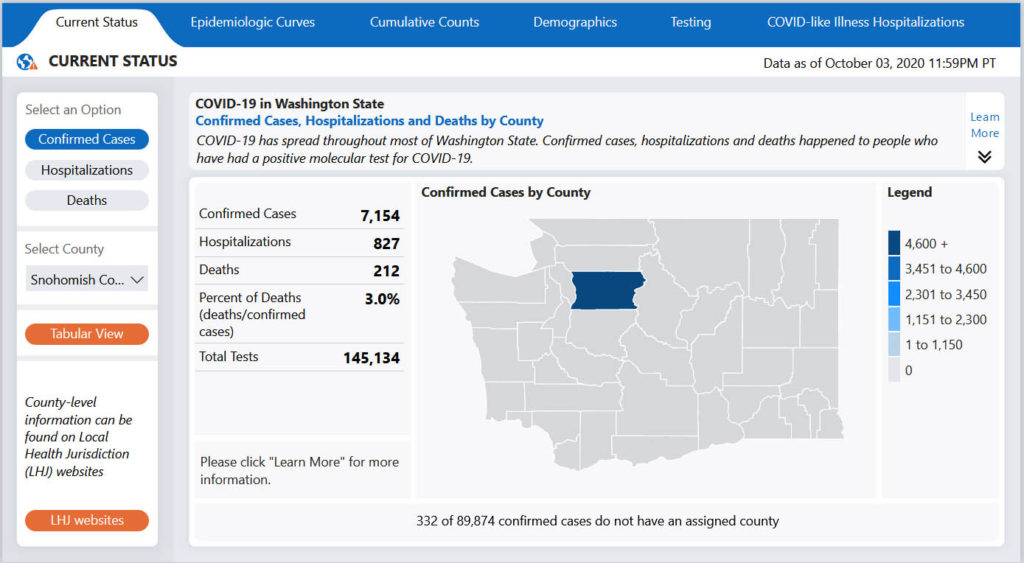 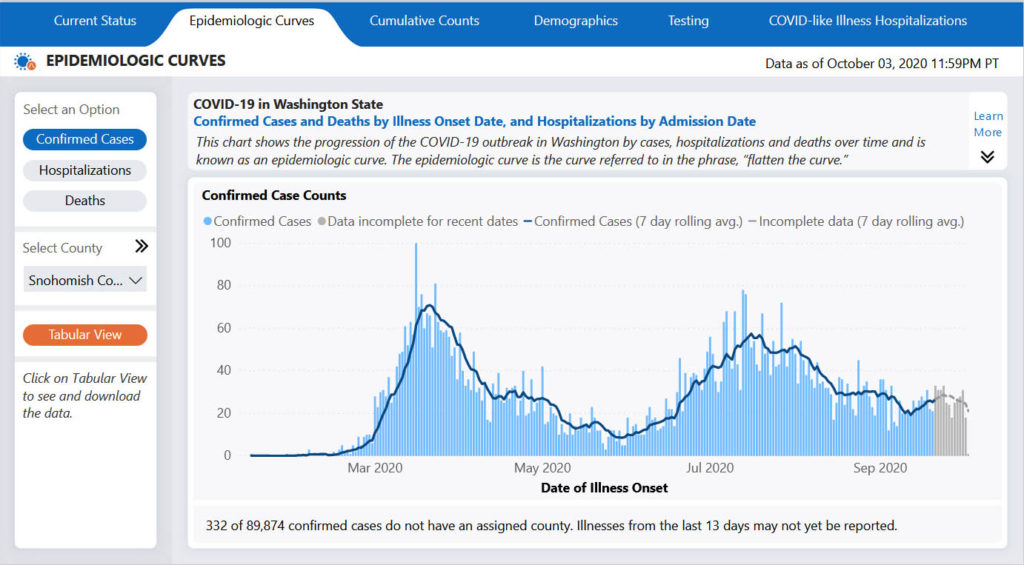 Trends in critical county measures over time (total cases, recovered cases, and active cases) are shown below (these numbers are through Oct. 2). 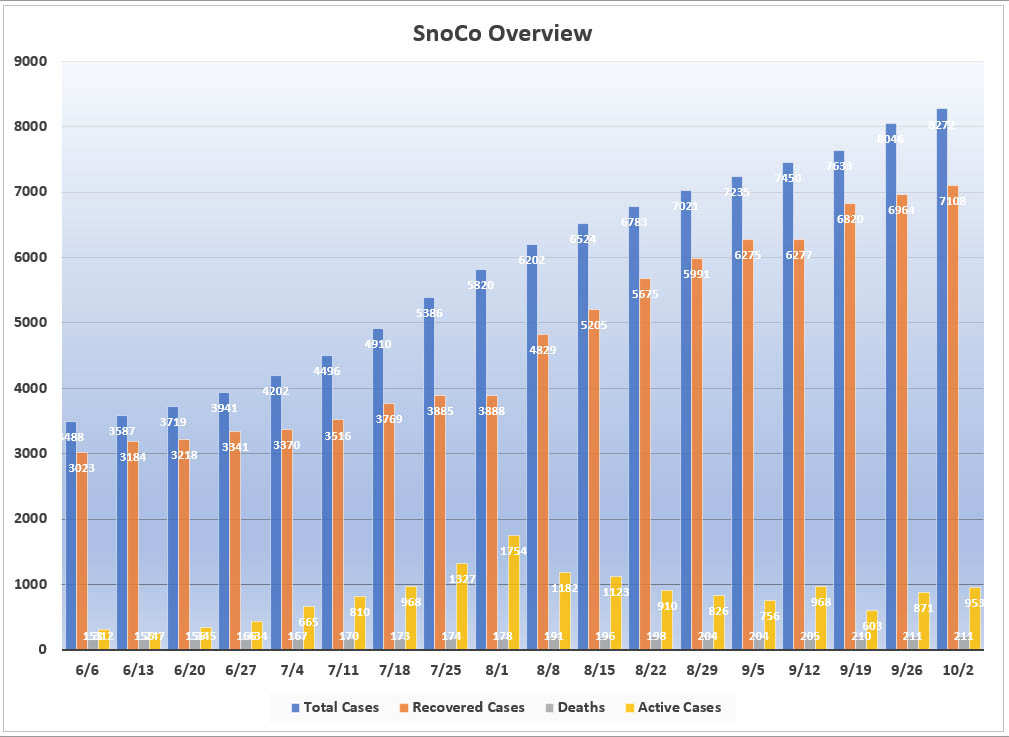 As of Sept. 26, the case rate (cases per 100K population, 2-week rolling average) stands at 46.4, up 4.5 percentage points point from the previous week, moving us further from the state goal of  25. 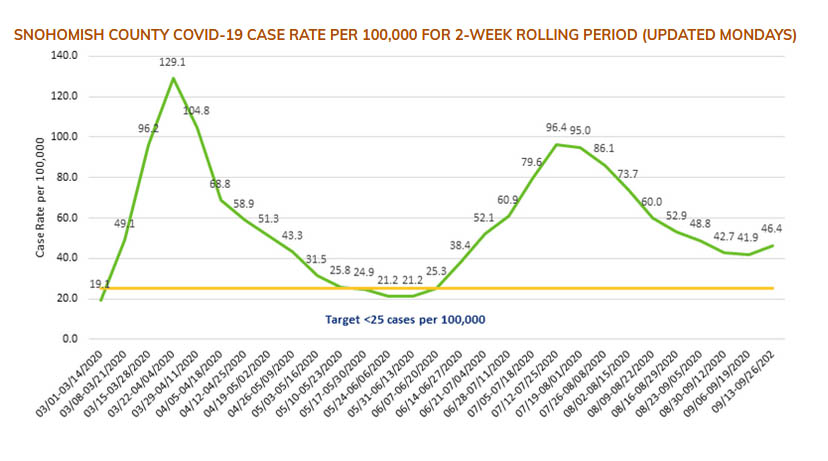 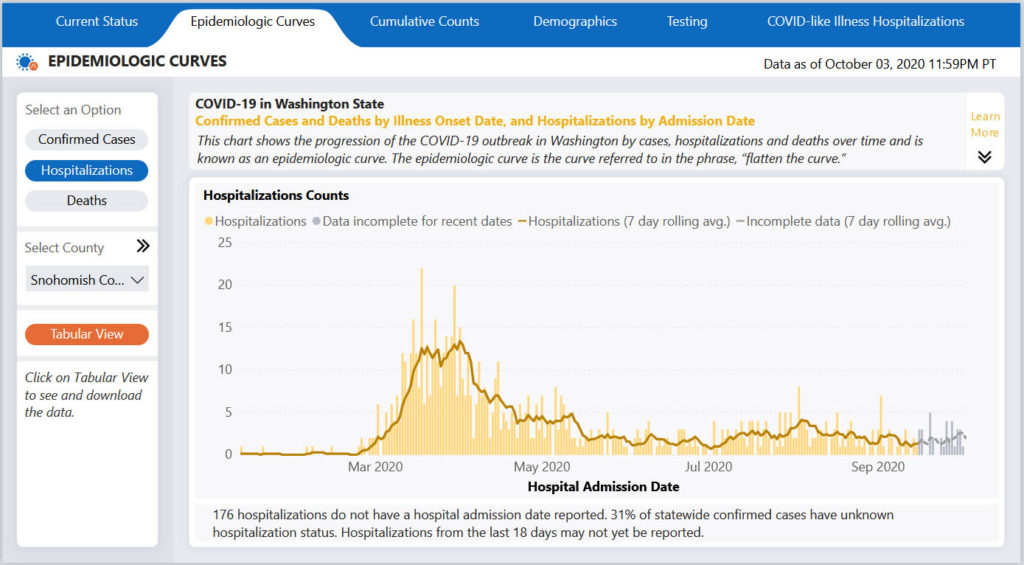 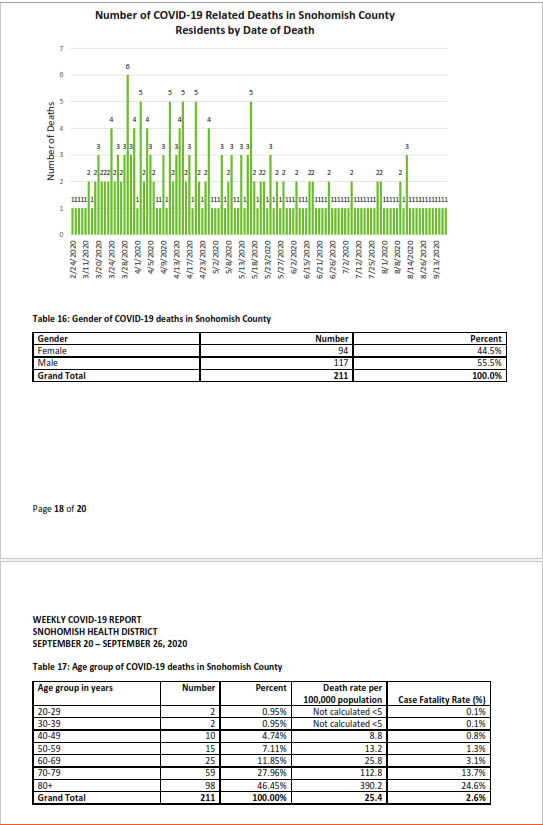 The testing activity chart and table below reflect and compare overall counts with numbers of positive results through Sept. 26. Note that the positivity rate in the county has crept up to 3.1 (3.2 on the line chart), moving us further from the state goal of 2.0. 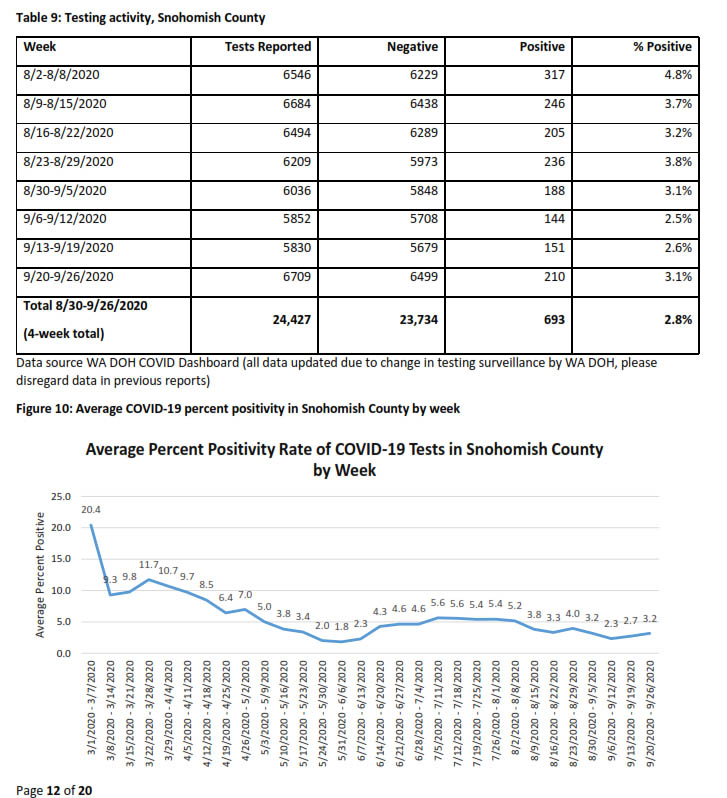 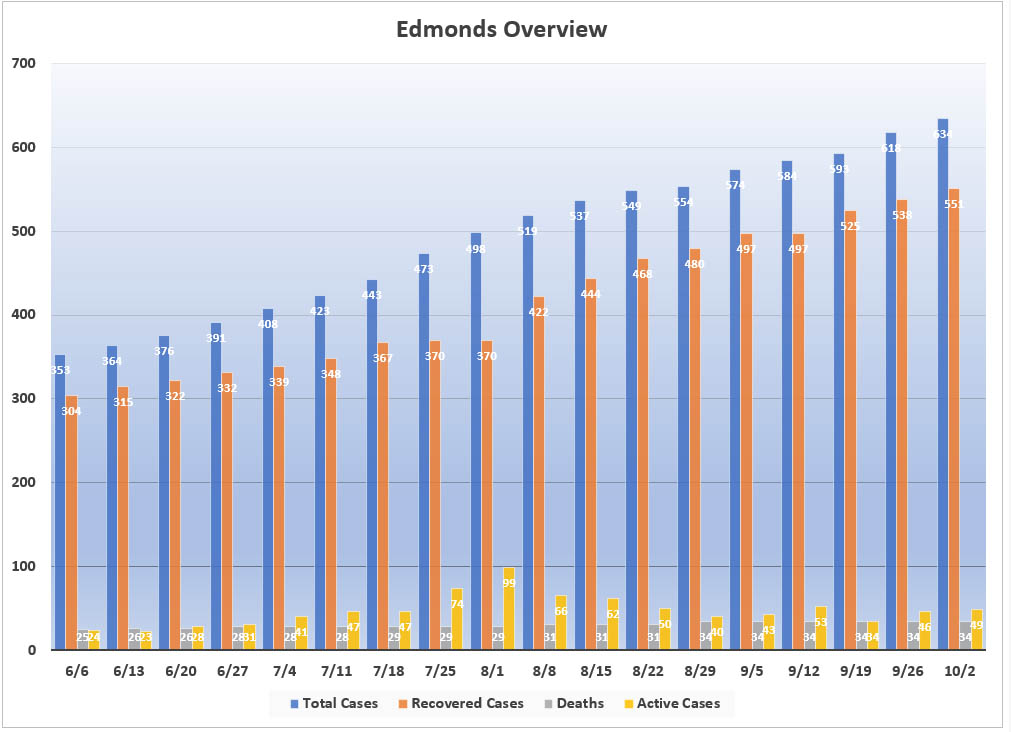 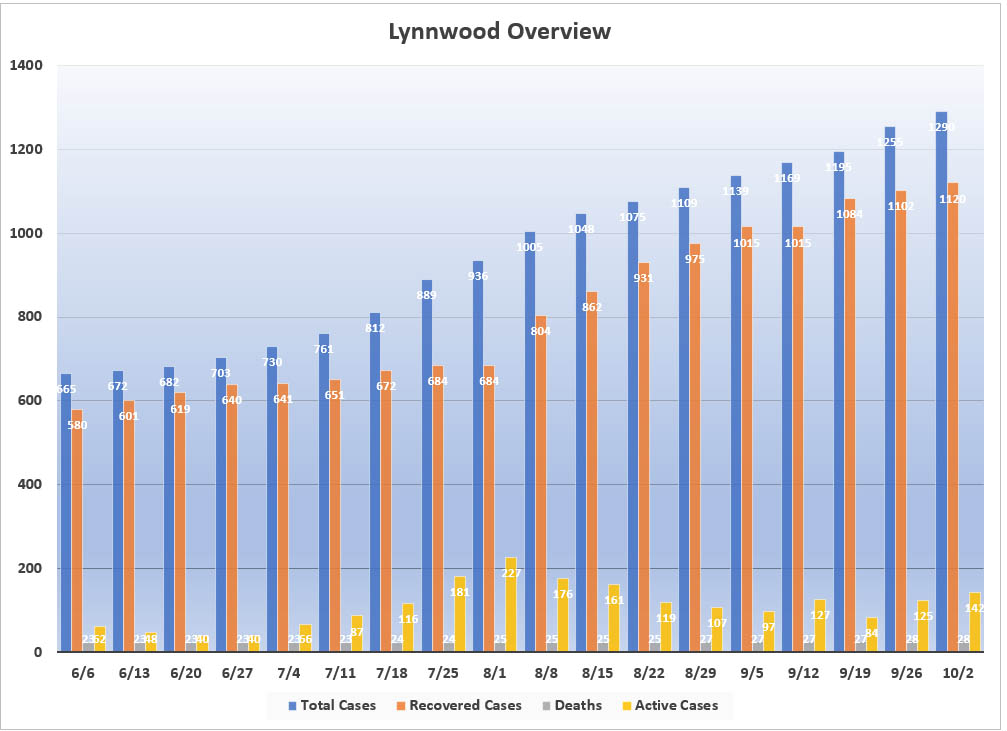 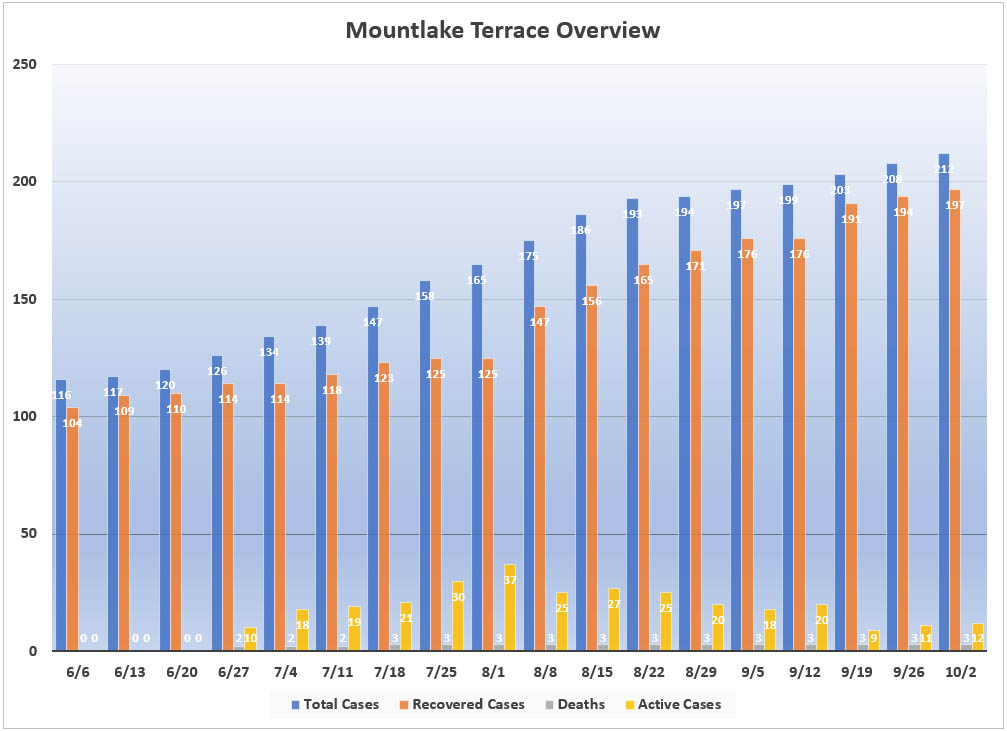