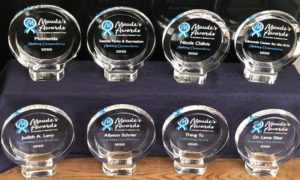 Edmonds Center for the Arts announced Wednesday it has received a $25,000 Maude’s Award for Innovation in Alzheimer’s Care. This award recognizes ECA’s Dementia-Inclusive Series and its commitment to the creative and social enrichment of persons living with memory loss and their care partners, the performing arts center said in an announcement.

Maude’s Awards for Innovation in Alzheimer’s Care is a new program of the Richard and Maude Ferry Foundation dedicated to enriching the quality of life for persons living with Alzheimer’s disease and related dementias and their care partners. Edmonds Center for the Arts is one of three organizations receiving a $25,000 awards. Five individuals received $5,000 awards in 2020, the inaugural year of Maude’s Awards.

“We are incredibly honored to receive a Maude’s Award,” said ECA Director of Programming Gillian Jones. “Over the past five years, the Dementia-Inclusive Series has been at the heart of ECA’s outreach work. It truly is our privilege to engage and share joyful moments with community members with memory loss and caregivers.”

Launched in 2015, ECA’s Dementia-Inclusive Series was developed with the mission to create opportunities for individuals with memory loss, their family members and care partners, to engage and experience joy through music, theater, and film. The series is part of an ongoing ECA initiative in collaboration with community partners that explores the intersections between the arts and creativity, and the collective health and well-being of our community.