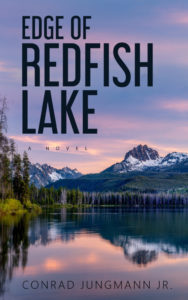 Ripples from one of the lakes hidden away in the Pacific Northwest spread a legend about the redfish that returned to the lake to spawn every year on their brutal trip upstream. Stories have been told of numbers so massive a person could walk across the lake on the backs of the fish. A crimson, red-blood glow described generations ago inspired many people through time.

Now it’s 1988 and Seattle is on the brink of the Alaska fishing season’s start. There’s much activity in this staging city for people heading up to work for the short summer. University graduate Julian Hopkins is on top of the world with a promised news reporter job starting after he returns with his hard-earned paychecks from his last fishing summer. In another part of Seattle, more sinister preparations for an Alaskan journey are underway — murder.

Alaskan fishing is not for those weak in determination. The author’s description of this seasonal marathon is gripping in its physical strain, workers’ interactions, and stunning wilderness beauty. This year there are also some ominous and terrifying events that leave many involved shaken to the core.

When Julian Hopkins returns from Alaska, a possible serial killer is reported on the loose and Julian has an assignment on this big story. It turns out that this will be the story of his life, and in fact it may mean his life or death.  Julian finds himself up against the honed, merciless wits of a twisted murderer.

This novel fascinates the reader on every page with the conniving depths and complex toying with evidence and clues to turn law enforcement in circles. Every page teases with the suspense of where the twisted trail will lead next, and who is the next victim to wander into a waiting, deadly trap. Along with the mystery, this story wrestles with some important and enticing questions about the science of law enforcement, and the court system

This is the debut novel of 20-year Lynnwood resident Conrad Jungmann Jr., an avid fishing and outdoors enthusiast. Jungmann earned his master’s in journalism at the University of Missouri before embarking on a 20-year career in digital journalism and marketing. He lives in Lynnwood with his wife and three children.